Magical abilities. Has almost a complete mastery over the art of magical art of Transmutation.

King Thamior Liadon is the elven king of the Blue Woods and rules over the Blue Elves. As a prince he went to go study magic at the Tetons School of Magic in South Port. Being an elf, his kind live well over 700 years, which enabled him to study at the school for 200 years. He trained under the best elven wizards, but his training was cut short when word reached Thamior about the death of his father, the previous elf king. Thamior was summoned back to the Blue Woods to be crowned King of the Blue Elves. While sitting on the throne, the Blue Woods have gone through a mixed era of conflict and stability. Humans from both Calanais and Skara Brae made their incursions upon the Blue Woods to gain more lumber for their houses, cities, and war efforts. King Thamior employed the help of the native Firbolgs to help in his endeavors in saving their woodland. The Firbolg's interests aligned with the kings, and ever since then, the Firbolgs have lived under his protection in exchange for serving as shock troops. The elves and their Firbolg allies pushed the humans back, but not until the forest had been significantly reduced. The forest has retained its size since then, but King Thamior is now mistrustful of humans that enter into his domain. Recently, something has been stirring in the heart of the Blue Forest. The elven sages have slowly been driven out of the Blue Temple -- sacred to the elven god Sehaine Moonbow. Weird creatures have been seen, and there has been mysterious disappearances of elves and Firbolgs alike. This has made him close his borders to the outside world to try and contain whatever it is that lurks within.

King Thamior is a bit of an absolutist. He developed this type of morality after several wars with the human kingdoms of Calanais and Skara Brae. He won't do anything that will put his people risk and has shut the Blue Woods off to the outside world. With the recent dark happenings in his woods, this has made Thamior even more suspicious to the point where he won't risk or allow any stray humanoid to venture into his realm. In his mind, anything from the outside that is allowed to enter puts his whole kingdom at risk.

Seeks to keep the Kingdom of the Blue Woods safe from all outside dangers.

Being an elf, Thamior Liadon adheres to the elven pantheon. But, being a sea-elf, Thamior worships and upholds two elven gods above all others; Deep Seshales and Sehanine Moonbow. These are the two patron gods of the sea-elves and are heavily worshiped throughout the Blue Woods. 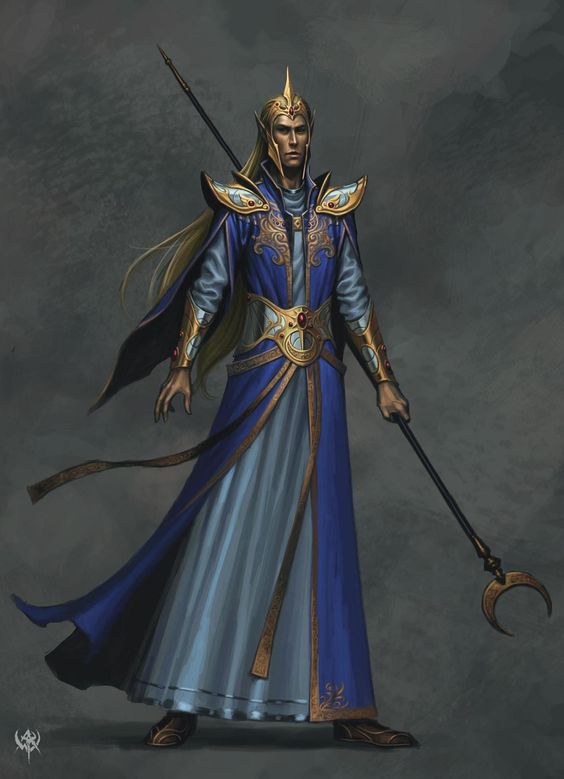