Zonzi is 6 feet 6 inches tall, with an athletic build and is roughly 20 years old. Like a young boxer that has never had a real fight.

His eyes a green teal and his hair is a golden yellow blonde that is shaved on the sides, leaving the top to be braided and spiked. Zonzi resembles a half-orc, though he does not have tusks.

He has violet-hued grey skin, with subtle markings that resemble the veins of marble stone. On the back of his left hand he has the Quori symbol for the Broken branded into his skin.

*Zonzi is completely color blind, but only his sister knew this.

His clothes are rough spun simple attire of working class of Korth. While not his intention, he does smell of fish most of the time. His armor is an older splint mail favored by the Karrnathi military a decade ago. He wears a bracer that has a blue-green crystal stitched into the leather with metal wires.

Twenty years ago, his mother (her name is unknown to Zonzi?) fled Sharn just as the destruction was spreading caused by Levistus. She found passage on a ship for herself and her two children. While at sea, unnatural storm raged and capsized the ship. Zonzi and his twin sister Zunza, were found clinging to debris by a Sarlonan fishing boat. The were given to the the Path of Inspiration (religion that worships the Quori). The two of them were raised, indoctrinated and trained by the church to become hosts for the Quori. They were the Chosen and spent their days isolated in the Temple of the Chosen, a monastery in the capitol of Riedra. When they came of age (roughly 20 years later) they participated in the Day of Giving (a ceremony where a Quori takes control of the Chosen). Zonzi was afraid, so Zunza went first. Zunza spoke to him telepathically to reassure him. As the Quori took his sister, she screamed into his mind. Distraught and reeling as his sister's telepathic wail still blasted him, Zonzi refused to continue with the ceremony. As he was was taken away, Zunza’s inarticulate psychic screams until he continued until was dragged far from the temple. He was branded as one of the Broken. Exiled from the temple, stripped of rank and status. He was sent to the House of the Broken, a small remote monastery for the Broken and Elan to live out their days in isolation. By chance he was able to escape during the night. When he reached the coast. A Kalashtar (an agent of Gainitari) helped him board a ship for Karnath. He has been working for the Gainitari in Korth for the last 6 months and working in the fish market. Zonzi considers his sister to be dead and hates the Quori for taking her.

Zonzi received a thorough education and training from the temple. Although he is finding out that much of their teachings may have been lies.

He has found some work as a courier, though he has not been requested since the incident where he mixed up his parcels with another courier. For the most part he has been working the fish market, gutting, cutting and hauling.

Ruining his one chance to talk to the strange person, Populace, who reminds him of Zunza.

Losing his twin sister barely 6 months ago. He mourns her still.

Zonzi is educated and driven. His first languages were Riedran and Quori, but he has been learning the Common speech and Goblin since arriving in Korth.

He has spent his life being lied to. He lost his sister because of the lies the Quori. He dreams of avenging her death on them. Not wanting to take a life unnecessarily, Zonzi will not readily wield a blade in a fight...if he can help it.

For last 6 months, Zonzi has mourned the loss of his twin sister. Through his conversations with Gainitari, he believes his sister is gone. Gainitari talks often of rebellion and fighting the Quori, though until recently Zonzi has been mired in depression. Now he speaks of avenging her and destroying the Quori.

Zonzi's grasp of Common speech is limited and he often says things that cause problems for himself.

Gainitari Fynn Populace Ha-Yip: Old Goblin in the Fish Market, who gives Zonzi work sometimes and has been teaching him Goblin and Common.

Formerly Chosen Templar of the Inspired. He has been coming to terms with the notion he has been lied to by the Path of Inspiration his whole life.  And he is not sure where he belongs anymore. 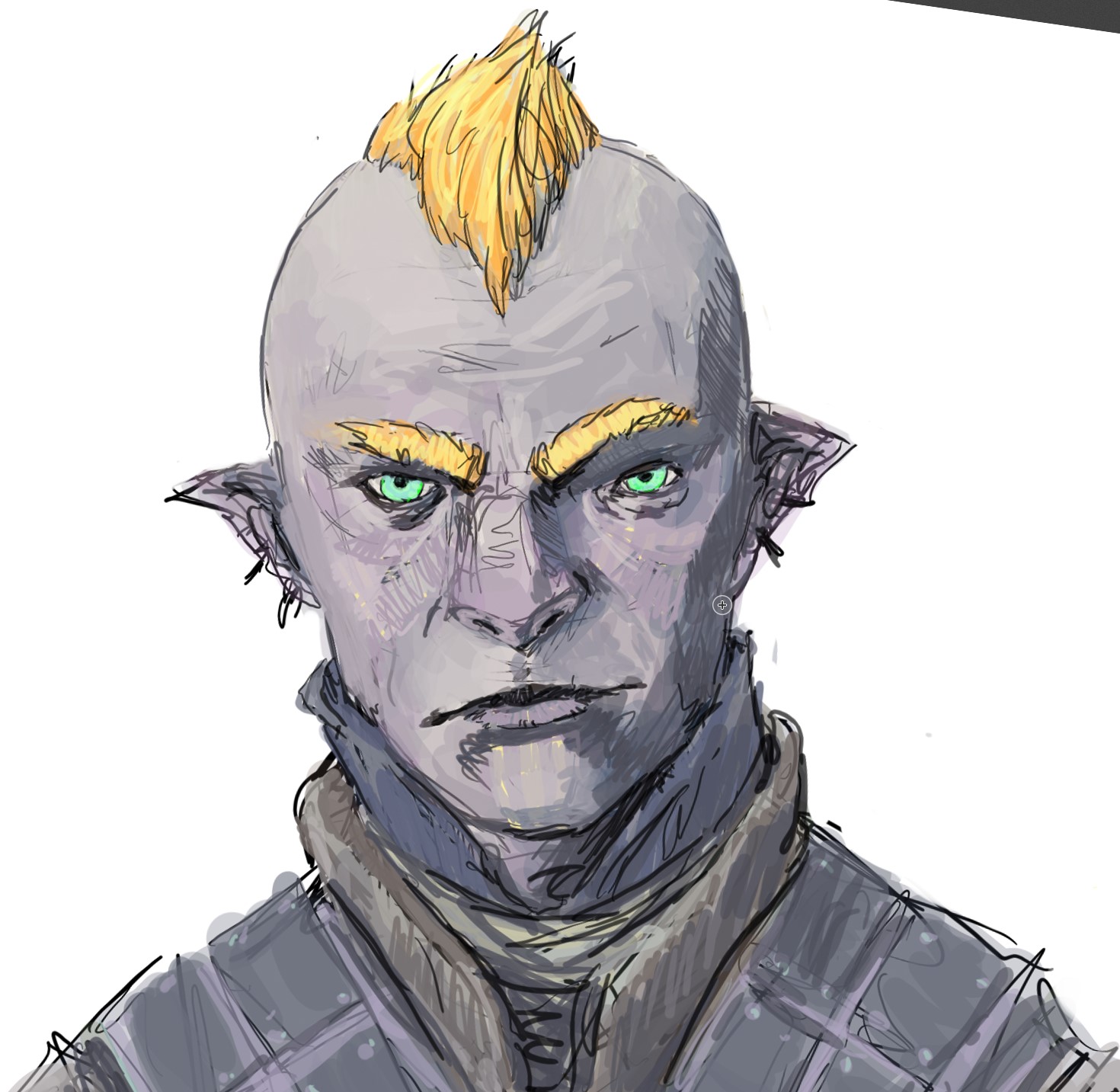 Zonzi escaped Riedra after the death of his sister Zunza. A Kalashtar helped him board a ship headed for Karnath. He has been working for the Gainitari in Korrth for the last 6 months and working the fish market.

Remove these ads. Join the Worldbuilders Guild
The Protagonists / PCs