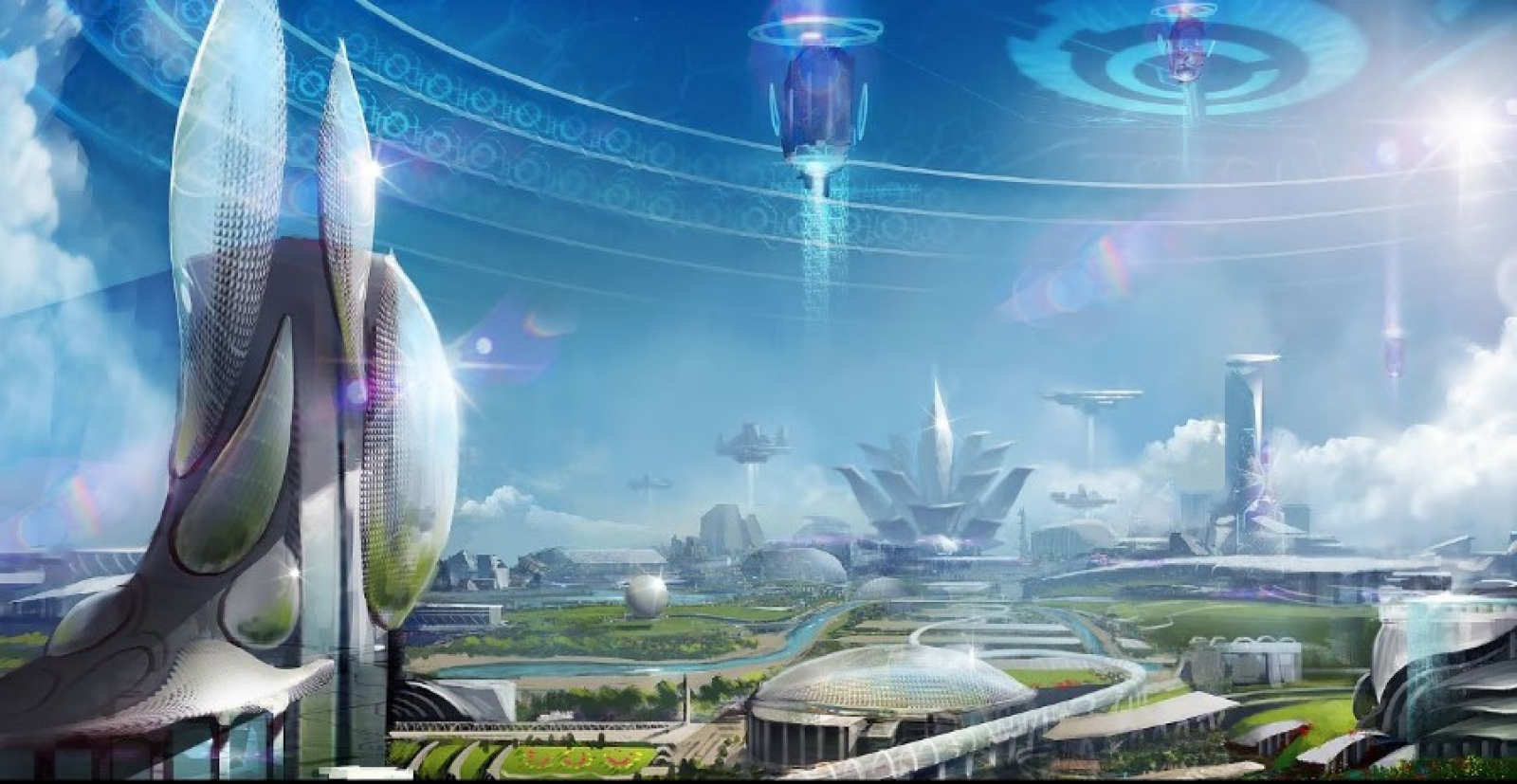 Boston, USA, suffered a direct hit from the giant ship catastrophe in the year 2035. A large fragment ripped apart from the massive star vessel as it fell through Earth's upper atmosphere and it impacted in the New England region of the United States. The shockwave pulverized everything in a 50-mile radius.   Aside from the apparent devastation and loss, all attempts to investigate the skyscraper-sized thorn in the area have been ineffective. The Ship leaked lethal levels of radiation for months, motion-activated drones attacked intruders with lasers or explosive projectiles and then, the dreaded alien emergence.   What was once a bustling home to millions of people was now a wasteland. After a few years when the ship power finally shut down, and the radiation faded, people who have escaped the onslaught of the Wizard campaigns returned to see if they could find an answer to stop the invasion.   One Wizard went to the colossal fragment and discovered a piece of technology that was unharmed - a Gauntlet of Power.
Sarott - Hedge Wizard used the glove to amplify his abilities and sought to keep the structure for himself. However, the community of villagers found a champion in Thundarr the Barbarian and Sarott was chased out of the area and lost his prized Gauntlet.   The story should have concluded there, but Sarott discovered an underground lab near the impact area. The facility was a technological containment system that imprisoned a miniaturized city. Sarott found a means to communicate with its leader, Voltak, and strike a deal. In return for the city to be restored, all resources would be at the Wizards disposal.   Sarott accepted the opportunity to be among the most powerful Wizards in the region. The City already displayed technology and self-sustainability far beyond what he has seen on Earth. There is nothing he could not do if he had such a city-state at his command.   Sarott devised a plan to get the Gauntlet back and restore the City to standard size. Finally, he managed to bring the City forth from the rubble, and it indeed was massive in size and scope.   He renamed the city New Boston, and it reminded him of the great civilizations across the galaxy.

The City had all elements of a caste style of society. The top 5 percent has assigned leadership or elite roles. The security forces comprised of ten percent of the total population. Workers make up 70 percent and the other elements (outcasts or deplorable) made up 15 percent.

The Mayor is Voltak. The leadership is dictatorial. The citizens are content with his decisions. This is because the city has been miniaturized, isolated and slated for oblivion.

The reason the city was miniaturized was because of its elite defense capabilities. A defensive force field, galactic railgun weapons, repulsor array systems against space enemies and dispersive atmosphere that rendered magical effects to a fraction of their normal potency. The collective alliance of star systems decided to just carve the city from its planet instead of suffering heavy losses in a military effort.

New Boston would have been a nightmare for the entire world if it weren't for the Gauntlet Feedback brought upon by Thundarr the Barbarian. The easiest way to describe the industry of New Boston is corruption. They were condemned to their fate because they were so effective at what they do. They traded in dark pacts, scandal; they catered to fallen morality of cultures. If society had a dark underbelly, chances would be great a few emissaries of New Boston would be in the thick of operations. Ancient human societies had their power brokers and seedy merchants that administered the backroom deals. New Bostonians would no doubt be principal investors in such things. An old myth of such a person, Jeffery Epstein was a purveyor of bad things in America. No one knew who funded him, how he obtained so much influence, how he escaped justice so easily, etc. He would be a perfect example of a New Bostonian. Could you imagine 100k of these types everywhere?

The city has managed a method to be self-sustaining through alien innovations. Waste systems, radiation converters, electron siphon technology, ration generators, and advanced battery-powered energy cells would have kept this city preserved for about another century before all its reserves were tapped out. If the city was not harmed by the Gauntlet feedback event, New Boston would have the technological capacity to harness solar, ocean power and use its radiation reclamation centers to create a mighty civilization.

The city was rife with corruption, but workers diligently kept elements of a civilized culture intact. Food, Water, Shelter, Defenses, Waste management, and entertainment were all there. However, the caste culture rationed who got what and the security/military kept the status quo. People didn't suffer illness because of the sterile environment, but those that were injured in upkeep or installing technology were treated in stabilizing centers. The population did not have a means of reproducing, but aging was kept to a crawl with nanobot technology.

New Boston had many"guilds" or factions. More or less, they were areas of expertise by which they operated. Like a Den of thieves, they sought profit in every aspect of culture, and they had artisans in the craft of underworld activities.

It is unclear how such a place originated. A crime family? Overthrown leadership? A society devoid of morality? Under most circumstances, a flourishing culture succumbs to moral decay, but it remarkable how this place uses it as its fuel to thrive.

The buildings of the elites are quite a marvel to behold. Elegant, gaudy, breathtaking beauty are some terms that come to mind when describing the metropolis of New Boston. The leadership spared no expense when it came to erecting structures demonstrating the successes of criminal enterprise. Likewise, the slums are pathetic areas of stacked apartments designed to keep workers as productive as possible. There are haves and have nots here as well but the have nots are brainwashed to believe that all it takes is one deal to make it to the big leagues. So they keep trying to hit the lottery of opportunities when it reality they are given a breadcrumb trail of tears.

RUINED SETTLEMENT
The summer of 2137. The year of the Gauntlet Feedback Calamity

Type
City
Population
When it was imprisoned. The City had about 100,00 citizens of various races. After the Gauntlet Feedback calamity, there about about 5,000 alien survivors.
Inhabitant Demonym
New Bostonians

by Dennis Chan
The Gauntlet of Power was destroyed by Thundarr's Sunsword. The feedback energy pulse ripped apart space and time around the city. The elements and technology preserving the structures and its inhabitants were lost. People aged. Structures collapsed. Technology short-circuited. The City was in ruin instantly.

Even though the city has been decimated there are still places which can be of use to Humans. Explorers and Adventuring spirits wanted!