While considered a "city" by the continent, the New District of Caliban is a sprawling arrangement of estates linked by the hub of commercial and religious activity of Porcelain Avenue. There is an element of glitz and grandeur that lines every street, but despite the pretty exterior, the New District hides a history of violence underneath the rule of the Dragon Clans. All races may be welcome in these silver-lined streets, but all must defer to the superiority of the dragonborn that call Caliban home...

In general, the buildings here are covered in deep blue shingles or, on the streets closer to the outskirts, one of the colors of the Dragon Clans. Crisp paint in outlined and embellished with silver trim that gleams in the daylight or the light of the blue, purple, or black paper lanterns illuminated by arcane workings. All of the buildings are pristine and those that are in need of repairs are quickly set upon by crews to restore them to their former glory.   While most of the buildings are on the flatter valley between the mountains, some buildings stretch up the mountainside. The roads are wider and paved, often traversed by foot, horse, or donkey, or even – more recently – levitating carts from Eredet and Nacheevi. Various small roads criss-cross the mountain range, but the largest is Porcelain Avenue, which connects the Porcelain Tea House on one end and the Temple of the High Oracle and beyong to the Moon Guard Complex. Other larger roads lead to each of the Dragon Clan Estates.


The Law is written and enforced, primarily, by the Dragon Clans. An offshoot of the Moon Guard does serve as a police force patrolling Porcelain Avenue, however. Regular civilians are expected to obey the laws put in place by their draconic rulers... those of non-draconic lineage should take careful heed to the laws of the city of the Moon.
Crimes of particular interest are as follows:


Long before the Dread King's War, Porcelain Avenue was nothing more than a simple strip of land with a small cluster of buildings, a smattering of shops, and a teashop at one end of the road. Now, it has expanded to be a large town in its own right, linked with the estates of the Dragon Clans. Tourists flock here to peruse wares and partake in the culture of Caliban, often underneath the moonlight. Festivals and parades are held along the main street here and it is the only neutral ground where all the Dragon Clans can meet without the threat of violence...

A quaint bakery situated between two larger establishments about midway down Porcelain Avenue. It is slightly older, but still well cared for. A small white stonewall encloses a quaint outdoor eating area outfitted with cushioned chairs and silver tables. The metal gate contains a full moon, though its rare to admire this art piece in full as the gates are almost never closed. Inside, the bakery itself is somewhat small, but well maintained and filled with small paintings and portraits of various silver dragonborn throughout the ages – a family owned business.   The owner, a silver dragonborn by the name of Kaili, specializes in various pastries, but is most well known for her mooncakes and fortune cookies.   Available Desserts

Situated in front of the Temple of the Oracle is a small, dark blue tent. The flap to the tent is open, though it is hard to discern what lies beyond until you enter. Inside, the tent is rather dark, but an abundance of small little white lights slowly pop into existence. They reflect an illusion of stars onto the tent surface. A handful of oddities are littered around with the most notable being a crystal ball resting in the center on a cloth-covered table. Behind it, there is a mirror, half-covered by a woven blanket.     ...and more to discover.
Type
City
Characters in Location
Related Reports (Primary) 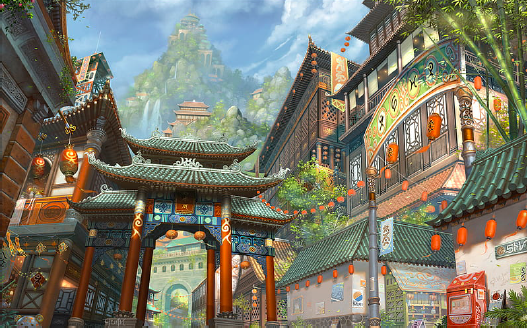