This inn is my life and I would rather die in it, than live without it! -Von Gillard (prior to dying) 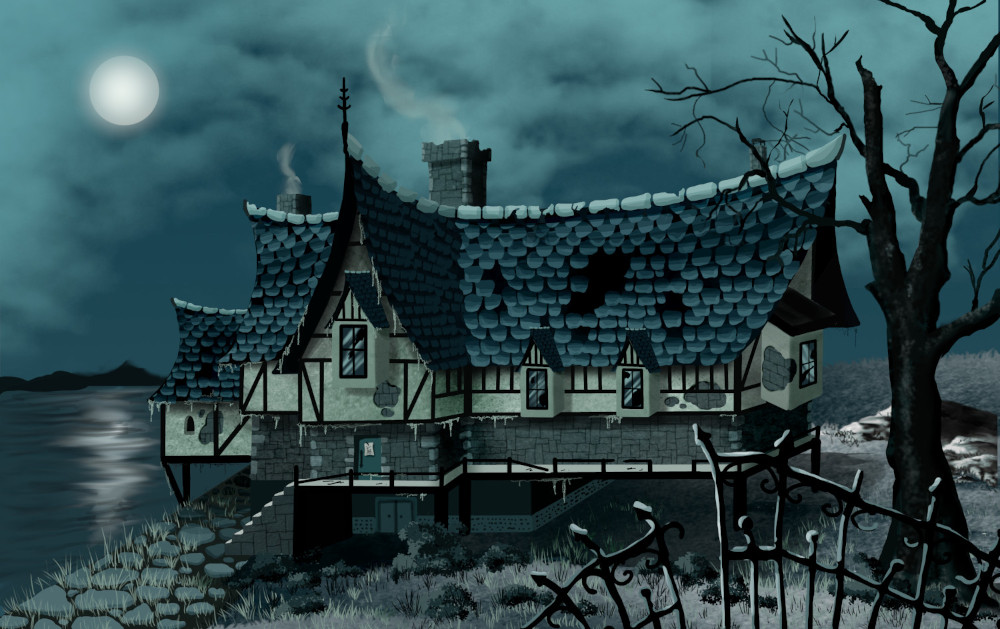 by Brad Van Camp
Sure enough the door slowly creaks open and you try to peer inside. A cold breeze, eerie lighting and morose music invades your senses and you wonder "Maybe this was a mistake". When you decided to enter the Deadlands in search of treasure amongst the ruins you were very excited. Now as you stand at your very first stop on your adventure, you are not so sure. However, the information you will gain from the patrons of this unique facility will be the best way to ensure success in your venture. You steel your nerves and walk into Death's Door.

Upon entering the building you are immediately greeted by all the sights and sounds of a tavern. The main room occupies the bar, kitchen, tables and an entertainer. Customers are talking, laughing, ordering drinks and otherwise enjoying themselves while the inn's staff are busily serving their needs. A beautiful and alluring waitress approaches you.   "Hi my name is Luna" she says with a grin. "Where would you like to be seated?". You look around the room in hopes of sitting warmly by a fire. You notice a greenish fire glowing in the corner providing light to the room; however, oddly it does not seem to add any warmth to the building. "This seems strange" you think to yourself. "Something isnt right."   At this moment your senses come alive and you remember where you are. The guests who just moments before were laughing and talking merrily appear now as the undead; corrupt, decayed, and unfeeling. The barkeep who was cheerily drying his glasses is revelaed to be a ghostly figure, busily pouring drinks to the wraiths and ghouls sitting at the bar. And the pretty waitress in front of you appears as she really is, a corroded, decaying zombie.   Luna motions you forward and sits you at the bar next to a creature shrouded in black robes. Only two red eyes visible through the hood. "Are you staying the night?" Luna asks. We have plenty of rooms upstairs. If you need the privy it hangs over the river through the kitchen doors. You hesitate to answer as she points to a map of the inn on the wall. "In case you want to pick a room. Oh and the menu is up on the wall to the right."
Death's Door Inn Map
Open full size

"Play another Phalanges!" A ghoulish patron yells from the back table. The organ music starts again and the tavern erupts in cheers. Phalanges, the living dead musician, tirelessly plays eerie music as visitors drink at all hours of the day and night. His constant playing has worn his fingers down to the bones, yet he cheerily carries on, playing the most depressing and morose music known to man. Phalanges is but one of the many things customers can count on when visiting the Death's Door Inn.

The Moaning Under the Floor

Besides the eerie piano music, you can hear a moaning and muffled pleas for help coming from the ground floor below. Whoever it is, they seem to be in pain and in great despair. You inquire of the Barkeep "who is wailing so desperately downstairs?"   “Oh, it is just Gary “ he replies. “Don’t mind him”.   You are surprised by the barkeep's flippant reply, but then remember, and you look up at the menu board suspiciously. You can’t help but conclude this has something to do with the “Bloody Gary” drink currently being offered for 5 crons a glass. Judging by the number of names that have occupied the title of the drink you conclude Gary won’t be the last. You wonder if that is the fate of those who fail to provide the proper knock sequence when entering the Inn.

One of the most popular drinks for the dead is Oliver's Pale Ale. This ethereal drink glows green and is served cold as it bubbles and spews mist from the glass. Like most items served at the inn Oliver's Pale Ale should be avoided by the living. If you need any confirmation on that point, just ask Oliver himself. You can usually find him residing in the north west room on the top floor.   Many years ago, Oliver visited the tavern searching for directions in a quest for lost treasure in the Deadlands. While interrogating a local wraith he saw a ghostly patron drinking the pale ale and decided to order one for himself. Unbeknownst to Oliver, all eyes were on him as he imbibed the cool green liquid. During the evening he slowly discovered that his body was becoming less opaque and intangible. He bagan to panic and he begged for help, but the otherworldly guests just laughed as Oliver transformed into a specter. He became an apparition unable to touch or hold corporeal objects, destined to float around the world without solid form or purpose. From that point on the Pale Ale had it's name. Oliver now primarily resides on the top floor. Many travelers visit Oliver seeking information to help them in their quests. He is a popular one to visit as he often has information about the comings and goings of the Deadlands. 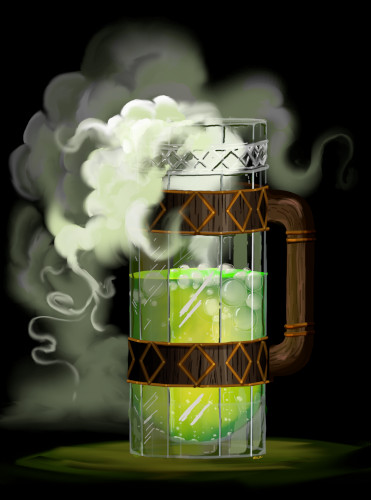 The Death's Door Inn was not always named so. At one time, the Inn was called The Lonely Plank Inn. In those times the Inn's tavern was alive with cheerful music, dancing and laughter. Frequented mostly by river barge sailors and saltys heading out to sea, the inn was never without patrons night or day. In addition to sailors the Lonely Plank was visited by statesmen, traders from the twin city across the river bridge, and a host of other travelers looking for drink, a bed and joyful company. That was a long time ago, that was a better time, before the corruption spread.

The Corruption of the Deadlands and the Inn

No one knows how the darkness started. All they know is it spread fast. Town after town caught in the deadly corruption. The lucky ones fled to the twin cities and crossed the river bridge. However, as the corruption neared, the bridge was purposely destroyed and the the unlucky ones were trapped and were changed, caught up in the magical darkness. The once happy people were transformed into the living dead; ghosts, wraiths, zombies and worse. The spreading darkness stopped at the Great River near the bridge, the site of the Inn that once was The Lonely Plank. The Inn that once was alive with music was now a death trap to those who would dare visit.

After the Corruption stopped at the river the humans quickly realized they could enter the Deadlands without turning into the living dead themselves. They began making plans to loot the deserted cities and towns and recover great treasures lost to the darkness. However each party that entered the corrupt lands encountered all manner of creatures making their goals almost impossible. In retaliation, they began to burn down buildings and structures known to house the living dead. This is the setting which lead to the treaty of Death's Door Inn.   For Captain John Gillard the order to burn down the Lonely Plank was bitter sweet. He had urged his brother Von Gillard to flee the corruption and abandon his Inn. But Von would not budge. He said "This inn is my life and I would rather die in it, than live without it" and days later the corruption reached the inn. As Captain Gillard and his men approached the old building with torches ablaze a ghostly figure appeared. The transparent form of Von Gillard himself floated across the deck and down the stairs to face his Captain brother. No one knows exactly what was said between the two, but at the end the burning was cancelled. A few days later Captain Gillard returned with two copies of a treaty. One copy was signed and posted on the door of the inn. The other was signed and returned with the captain. From that point forward anyone who knows the secret knock is safe to enter the establishment. All others are free game.   Enter at your own risk. 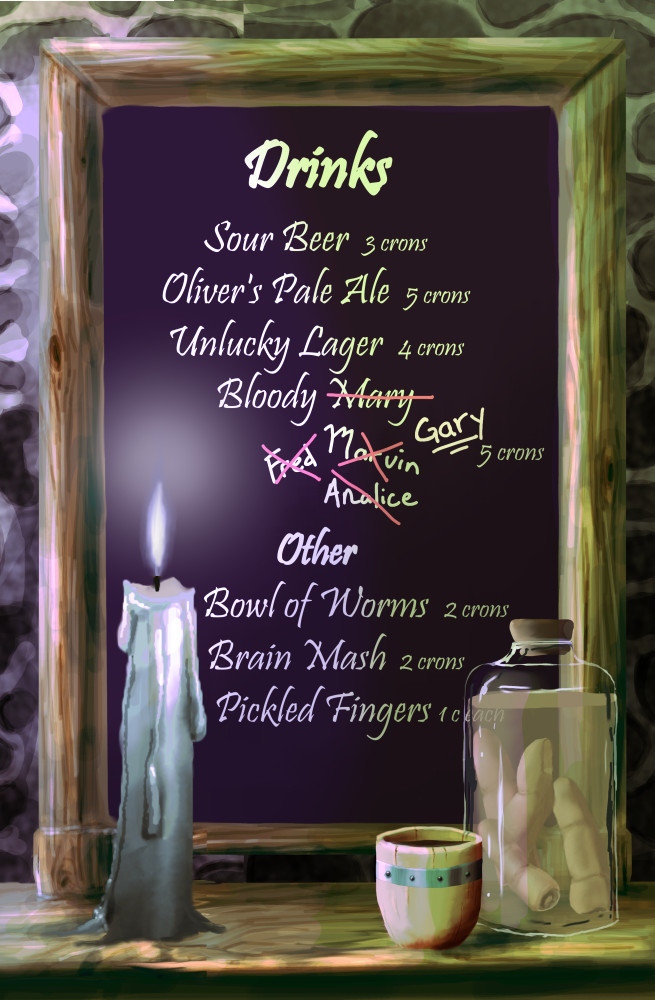 I love your art, the name of the inn, and your approach to this, with the 2nd person POV for the first half. I especially love the crossed out names for the Bloody Mary.

Thank you so much for the comment. Youre my first..commenter on WorldAnvil.

Oh my goodness, this was really atmospheric and super fun to read. I loved the whole concept and how it was told through prose in the beginning. The art is wonderful and I love both the crossed out names on the drink board and the touch of how the new name was painted over the old. I'm glad it worked out in the end for everyone and that they could stay there despite everything that happened.

Thank you so much for visiting the Tavern. I hope you made it out OK. :)

Love the quote, The artwork and the map in this article and the name of the inn!, a overall fantastic article!

I very much appreciate your visit to the Tavern.

Really good read, i like the mixing the living and the dead in a peaceful setting.

Check out my entry for the tavern Challenge   The Grand Muster

Poor Oliver. Poor Gary too. But hey, be careful when dealing with the not-so-dead!