The Dunewhale is a large sand-sailing ship and the main home of the nomadic sand-sailing tribe; the Dunestriders. It can be encountered sailing in the north-northwest desert of Balbaat. This ship boasts a large sleeping area and the most powerful of the tribes' mounted weapons, but mainly serves as a home-base of sorts. Its more limited movement leaves it to sail only the larger dunes while smaller ships are sent out to scout and flank.   The Dunewhale is "captained" by tribe chief Ghrayo, who barks commands from the ship's helm. It maintains a crew of at least 20 able-bodied men of the tribe who operate its harpoons, rigging, and maintenance.

"Truth be told, I've never seen such an impractical looking vessel in my life. And yet, watching it glide across the sand is something else... Something that makes you think about what might be possible." - Fugaro, "The Dunestrider Primer"   The Dunestrider is a vessel that measures roughly 230ft long. Made from wood harvested from the trees of the Sandy Forest, the ship boasts a relatively light and flexible build for one of its size. The deck sits upon several large constructs similar to pontoons, each also crafted from the previously mentioned wood. The flexible wood and tough rigging keeps the ship in one piece during dune jumps and collisions, though caution must still be taken.   Like most ships, the Dunewhale is powered by the wind. The pontoons, also called Skates, allow the ship to glide across sand. These are tapered at the front and back, curving downward to push sand aside and break apart smaller dunes. Thanks to the way they're connected by pulleys and rigging, the "skates" the ship rests upon can be turned independently of the ship's deck, with some limitations. This allows for better control over the steering of the ship. All smaller sand-sailing vessels retain a portion of this design.   The deck/hull itself is less concave than the design of the skates, but does act somewhat akin to a normal ship's hull. On deck there are several rails and rigging lines that allow for the operation of the ship's massive sand sails, which are designed to filter sand from storms and gusts. The sand pushes its way either off the side of the sail or up/down the sail and then into a hollow wooden pipe, which spits the sand out in a stream at the end of the boom or at the top of the mast. The mast itself is very thick and sturdy, with a large sail attached to the boom and one at the front for tight control. There are areas to tie yourself to both above and below deck, should there be rough winds or a hilly area. At the helm, there is a large lever-like steering section that controls the angle of the ship's skates. Lanterns dot the deck rails and are lit at night. There is a set of stairs at the back of the helm that lead to the Chief's quarters, and a larger set at the foot of the helm leading below. As with most ships, there is a Crow's Nest at the top of the mast.   Below deck are two distinct floors; the first floor down has the mounted harpoons (which are used to damage or immobilize enemies) for the ship near the sides, whereas the center is used as a communal area for eating and social interaction. Near the front and attached to the mess hall there is a cooking area used to prepare food. The bottom floor has the tribe's sleeping area and a docking bay for smaller sand-sailing ships, which can be hooked up to rigging and hoisted into the hull.   Thanks to the ship's size, it serves as a home for all members of the Dunestrider tribe. Since the smaller ships may be pulled up into the hull 112 people can semi-comfortably live within the ship's walls. There are many rooms, each equipped with 2 bunk beds for 4 beds per room. Each room also has 2 storage crates and a wall sconce for light. There are 2 bathrooms and a storage area for water.   In all, the ship can house up to 12 smaller sand-sailing vessels (as they can be pulled up and stacked thanks to their foldable sails and light weight).

"It's been said that the first sand sailing vessels were too small to support a large group, and so one chieftain generations ago sought to build a vessel to rival a rare and ancient creature that roamed the dunes." - Fugaro, "The Dunestrider Primer"   The Dunewhale was created long prior to Grahyo's rule. Oral traditions passed down through the tribe claim that it was built to resemble, roughly, a creature of the same name that could be spotted in the desert. There are no rough estimates of the tribes' creation or the creation of the ship, as they have been living in the dunes for centuries.   Grahyo is young and has been chief for roughly 5 years (taking the mantle at the age of 20 when his father was killed). He's commanded the ship since and has gained near tribe-wide approval of his skill in handling the ship and ordering the crew.   Thanks to analysis of debris offered up by the tribe to curious historians, the wood may date back at least 3 centuries. There are similarities to the makeup of current trees found in the Sandy Forests to that of the wood used to make the ship. However, there are key differences that suggest a major change in environment has happened for the trees since then. Why the ship stays in good condition baffles historians, but rumors about a wax the Dunestriders make to preserve it do the rounds every so often.

Below, you can find the map for all 3 levels of the ship. 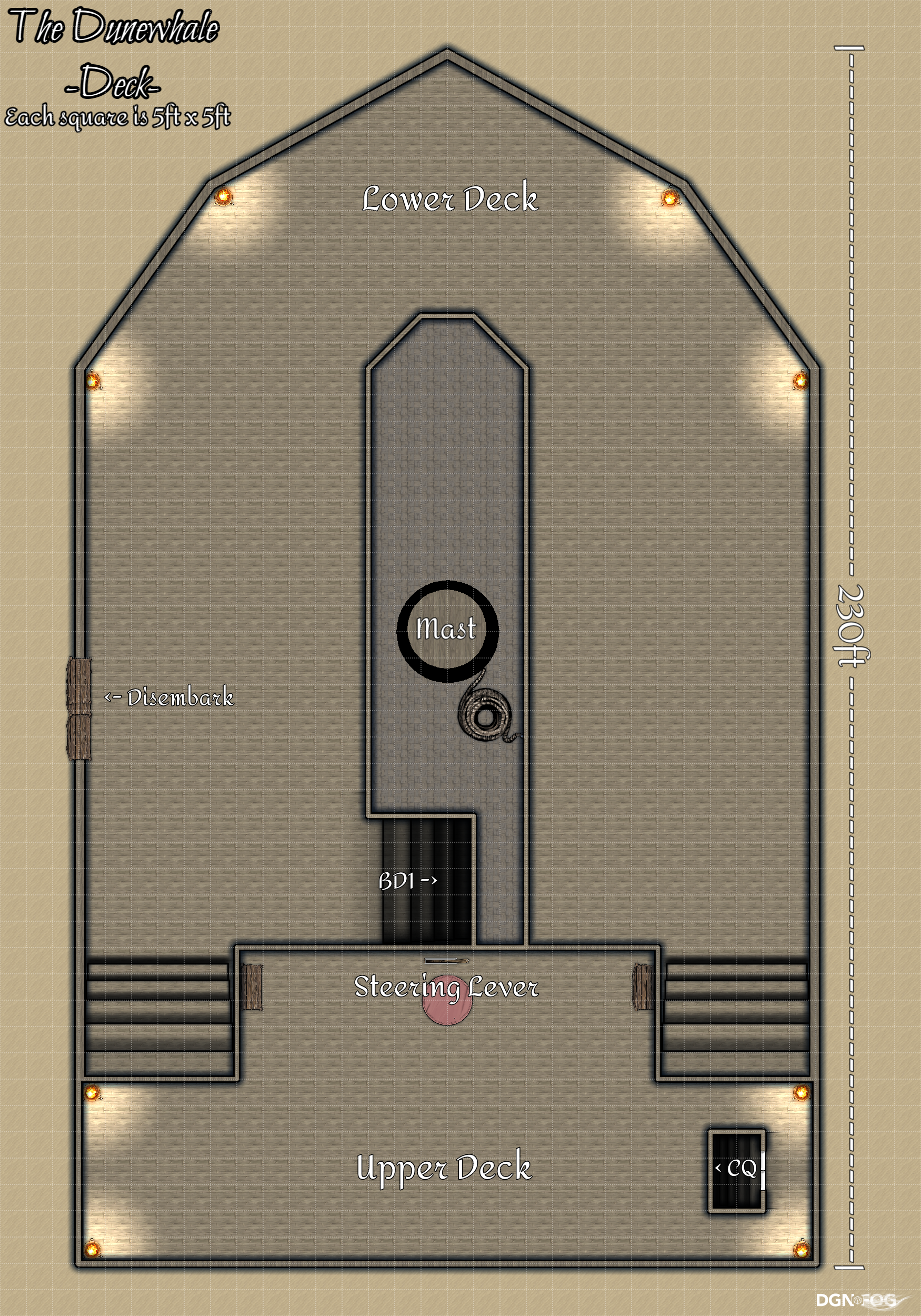 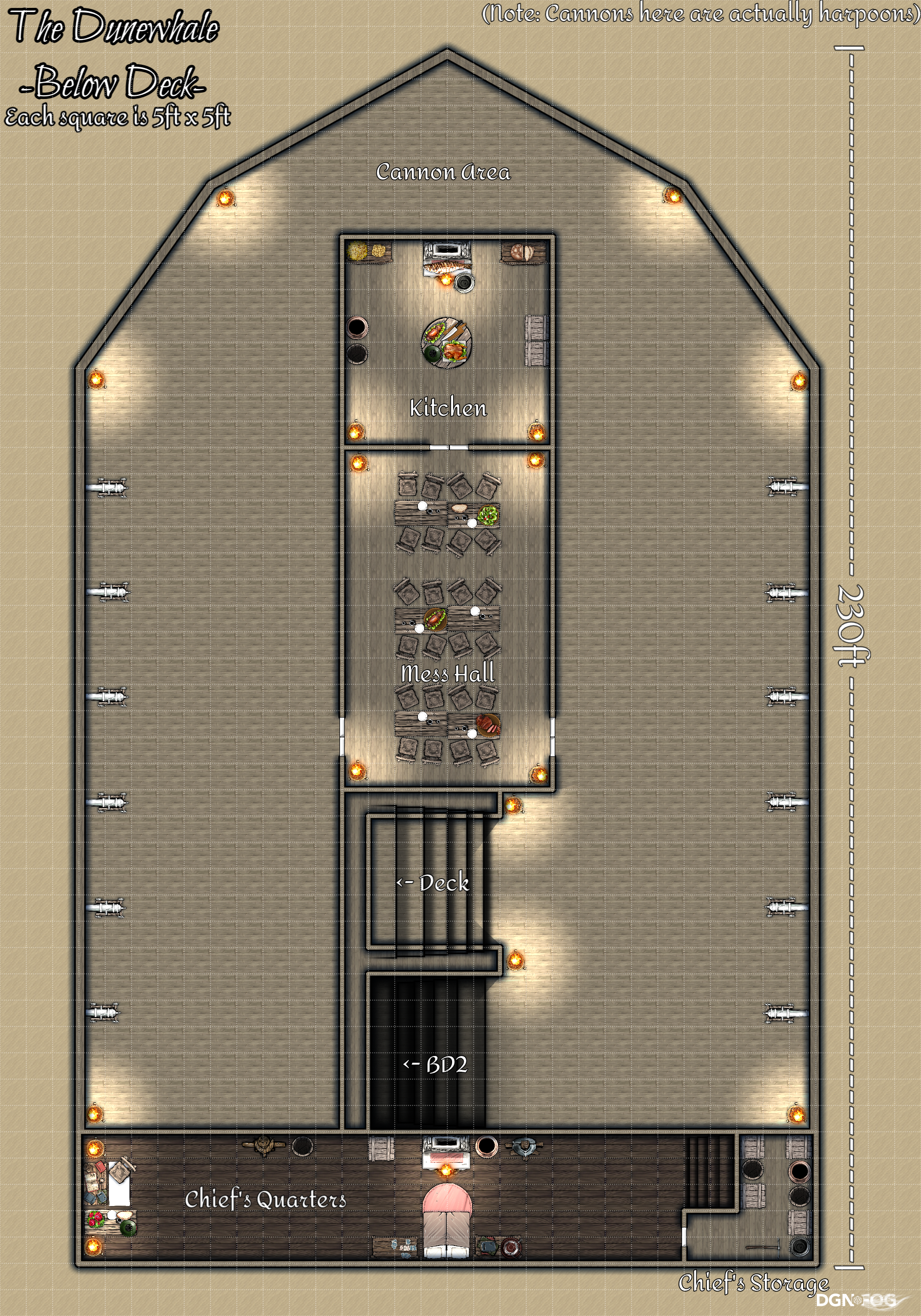 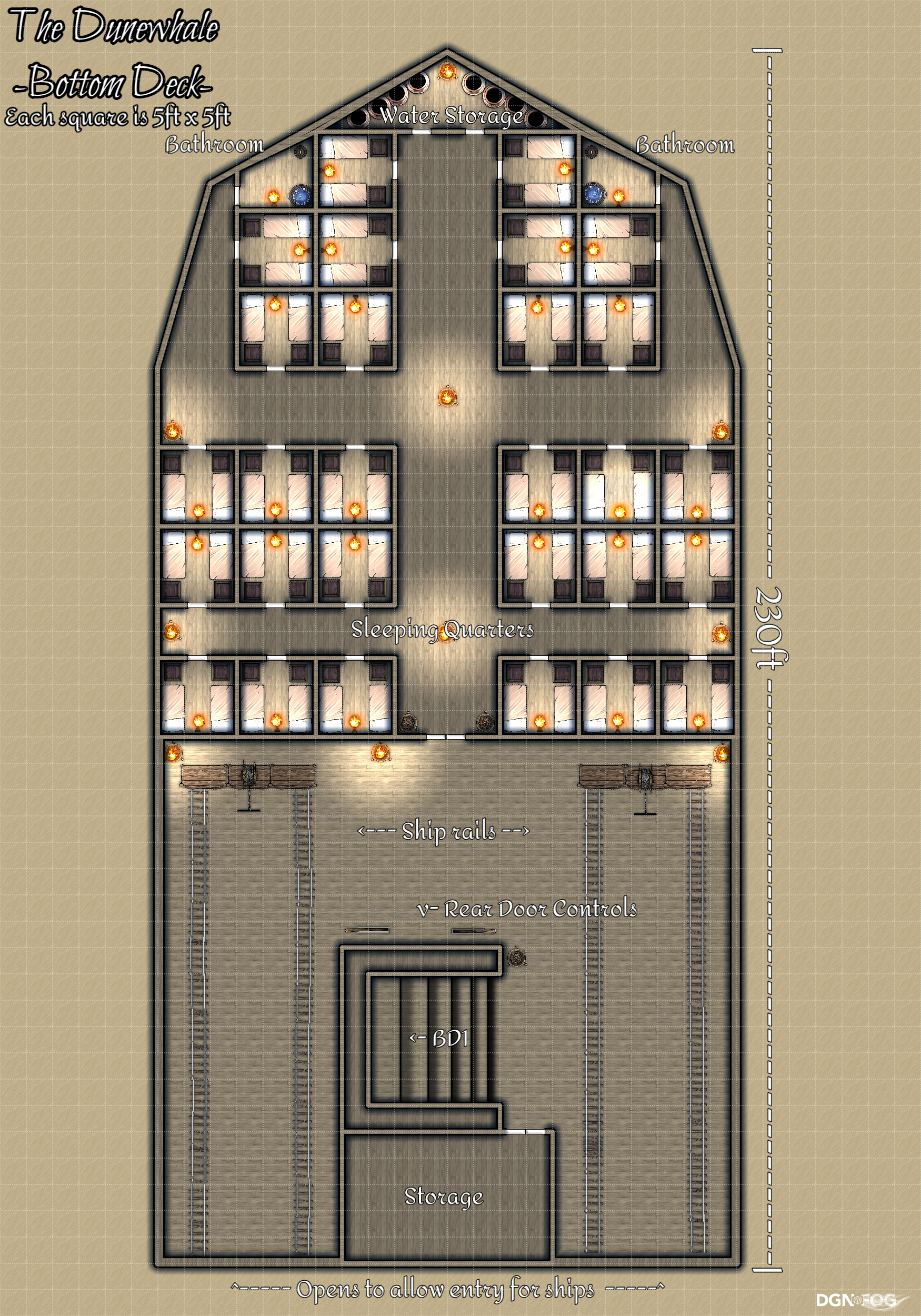 The Dunewhale's only propulsion method is wind. Thanks to the winds in the dunes of Balbaat, the ship becomes "stranded" only rarely.

The ship has 12 mounted harpoons on the lower deck. Crew and tribe members carry weapons like swords and axes.

The hull is constructed of wood from the Sandy Forest, and is durable under motion stress. The hull is vulnerable to attack by larger weapons.

since it seems this (and most) sand sailing ships are made of wood and in the desert, I am wondering about if using fire is culturally taboo, if the wood is naturally fire resistant, or if they have some other method of dealing with fires. other than that though i greatly enjoyed the article. 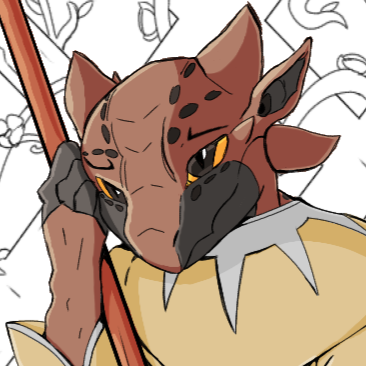 You make a good point, and I'll have to think about it. I'd assume no, considering how cold desert nights get, but it'd be interesting to explore.