This stone statue stares down from the Rivale cliffs to the chimneys of an industrial city making its best ignoring its inhumane gaze. Through human figure and disfigured face, the cold form of the young girl speaks of hurt and calls for revenge. Standing, head high, the child is captured in the sudden stop of her run to the fall, leaving watchers unsure whether she goes to her death or to rise the furious wings of her wrath. The girl about seven years old is shrouded in robes, and the sculpture shows great talent, as she seems about to come to life and pursue her steps. However, her precarious standing over the void, the claws marks on the sides of her skirts and her unrecognisable face, ruined by someone, madman or the sculptor himself, give her a sinister aura. Even though she is natural size and can barely be seen from the town below, all know she is there, and often their eyes wander in her direction with vague worry.

Thirty years ago, there was no such statue over Grímr. On one night of winter, screams echoed on the empty streets. As blizzard was there, none dared to outside and enquire the origins of the noise, but those were without a doubt produced by a young, femelle voice, and all through the night she kept screaming and pleading, high enough for even the weather's roar was less audible.   But opening the front door meant death in the deep of the winter, blizzard night.   The screams went on and on until the blizzard receded. Then the people went out. Some, driven mad by the continuous plead, remained quivering in the corners of their homes, others had mutilated themselves or even committed suicide, and it took time to find the one person to have disappeared.   In the Bli'ded family home, all slept until they were waken up by the angry neighbours: their home was covered in blood, furniture was in a sorry state, reddened and clawed, pushed to the side. And the elder daughter, Marhild, was nowhere to found.   Later, the appearance of the statue was remarked. Even though the face was smashed, resemblance to Marhild Bli'ded was striking, and few doubted there was a direct link to the screams and her disappearance.   The family, however, shaken by the appearance of their home, did not remember any of that winter. Upon waking up, they still thought they were in autumn, and while the shock was too much for the mother to withstand and she committed suicide as soon as she had the opportunity, the father was lynched to death by worried neighbours, not knowing themselves why they were doing it, but unanimous that this all was a very bad omen indeed.   When the authorities finally took back control over the situation, they were more cautious about the Bli'ded elder's culpability. He was no Wizard, and there was too little they could be explained. First of all, how had the statue appeared? There was no sculptor in town to wash it as a bad joke. And the screams settled so impossible, so unnatural, having echoed through the whole town and above the tempest.

Though before the events the Bli'ded family had a good reputation, this destroyed it. It is now widely believed that Sir Bli'ded was a wicked father and husband and the Dame a poor, weak soul unable to control her husband. However, considering the amnesia they seemed to be afflicted with and the place of the family in town - them being a well-off, politicaly powerful family - they are many who believe that these occult events were caused somehow by an opposing family, maybe the Clo'wn family who then rose to the first place. A few believe, with more caution, that the Clo'wn only blackmailed the Bli'ded elders without having actually provoked the girls disappearance, and explain that way why the case would never really be purchased, the authorities settling with calming the population.   Others say that the Bli'ded family was dealing with outsiders and messed up, blaming one or another of the many entities beyond. Finally, there are those who say the girl, who indeed was of an unnatural beauty, caught the gaze of an unknown creature who then chased here. They do not say whether turning to stone was her salvation or the pinacle of her tourment.

Though the story is only well-known in Grimr, it tends to leave a trace on those who only pass by, mainly because people generally retell it with striking emotion and many worried looks. While the events are becoming old as well, and the newest generation now gossip about it like it is an interesting story to be told by the fire or the shop with a good laugh, even them lower their tone and remember it is not just any event either when they see the tomb of someone who was plague to death by the screams or hear the delirium of one who was maddened. Many shiver thinking it might happen again, even if no other sign so sinister in Grimr or its vicinity announces it.

Grimr is an industrial town near the sea. It used to be a city-state, but events occurred cuminating with the Bli'ded Statue incident leading to the population distrusting the elites, and now it has been agglomerated in the Xulan empire who took that opportunity to gain the people's favour by promising them peace of mind. It does seem to be a safer place now.

The Bli'ded family used to own many factories in Grimr, including a quasi-monopole on textile. They were armators as well owning over fifty ships. The mother, Brynhild, was a quiet, beautiful woman, skilled in all traditional arts. The father, Haron, was a tall man, more impressive in reality than in any paint he appeared in, with cunning eyes. Their only daughter, Marhild, was a gentle and vivacious child, who impressed any who saw her by her already striking beauty and the skill inherited from her mom. 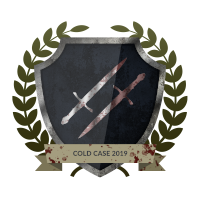 Special thanks to Dylon | Expedition Demeter for his kind advices.