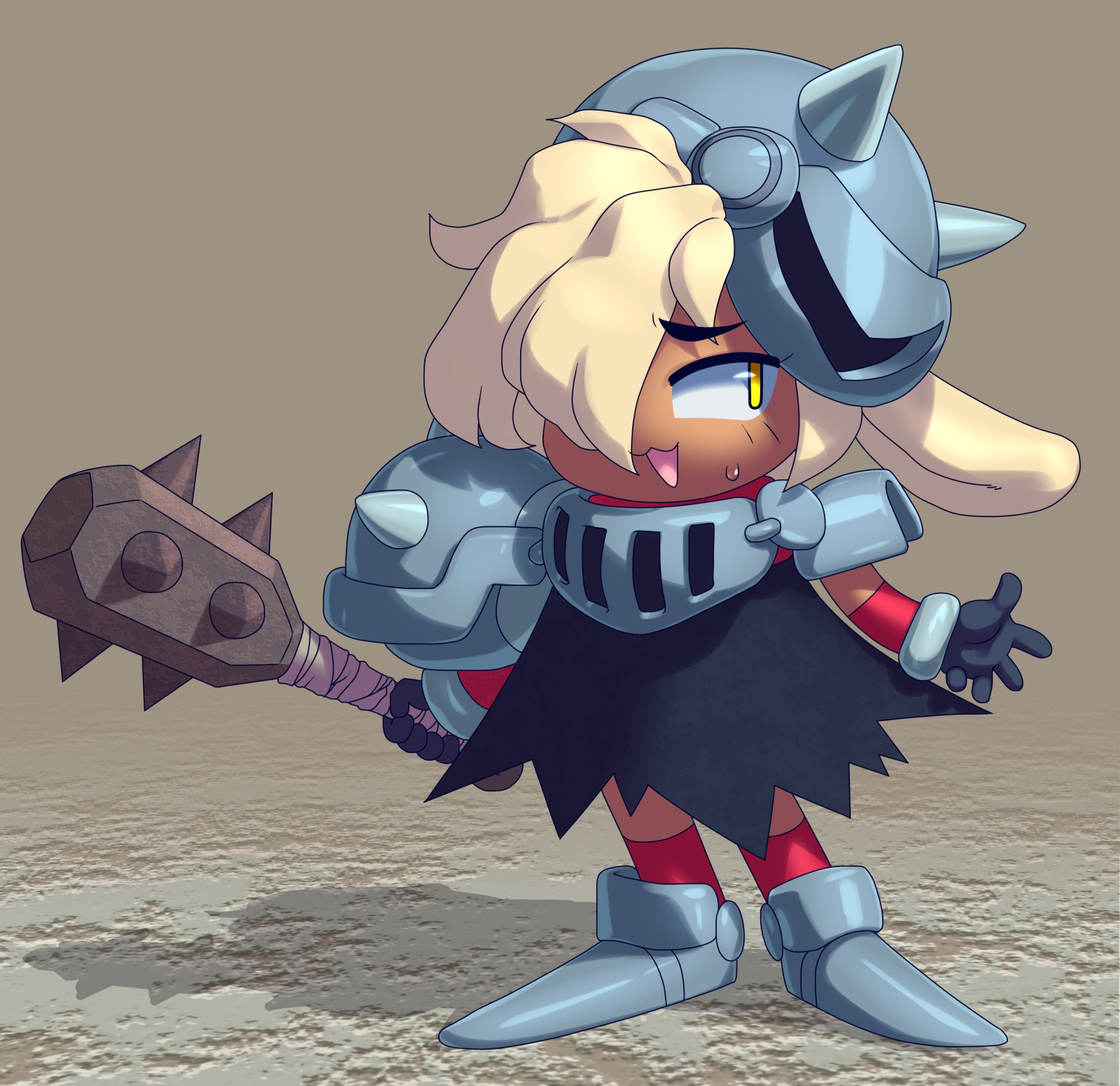 Fritz Lago, also known as The Rabbit Knight is a traveling Animal Hybrid Human who travels Dioya as a Mercenary. Fritz Lago is nearly entirely a human in physical form with exception of his ears and feet which resemble that of a Rabbit.

Fritz Lago was born to unknown parents in an unknown location in Dioya not long after The Great Disturbance. While Fritz' origins are unknown, what is known is that one day while searching the ruins of a trade outpost in The Wild Open Region of The United Lands of Midvail, a group of bandits from of The Broken Crown Alliance stumbled upon the young Animal Hybrid Humanoid nestled deep in the trunk of a tree. The first bandit who spotted Fritz was an Orc named Jukk Ob'barian who took the child in his arms. Fritz apparently did not enjoy this, because the baby tore at Jukk's beard with ferocity. Jukk, both amused, yet slightly pained by the infant, called the child "Mephit" and brought him back to his home in the town of Winham within The Broken Crown Alliance. In his new home, Fritz was raised by Jukk and his recently married compatriots, a Tiefling named Erris and a Dwarf named Gwanra. The name "Mephit" eventually turned into the simpler "Fritz"and Erris gave the child a last name so as to not distance the youth more from other humans.

As Fritz grew, his three guardians tried their best to keep up with the young Animal Hybrid. Jukk fawned over the youth while Gwanra and Erris gave him space to grow and learn at his own pace.   At the age of 6, Jukk gave Fritz his first weapon, a rusty dagger. Jukk trained Fritz every day in the basics of daggercraft, impressed with the child's natural ability to not just wild a weapon, but do so with profound dexterity. It didn't take long until Jukk realized that Fritz's ability to use a dagger was not because he was strong, but because he was quick, clever, and had remarkable dexterity. This became painfully clear to all when Jukk gave Fritz his first axe and the child simply was not strong enough to even lift it. Jukk did his best to turn Fritz into a berserker like himself, but realized that maybe the thin rabbit hybrid human would not be the best unchained warrior.   Fritz' training was eventually taken over by Gwanra and Erris. Erris, formerly a highwayman taught Fritz the importance of stealth while Gwanra indirectly taught Fritz' most important lesson, the value of lying. Gwanra was a notorious liar and after many years of seeing Gwanra successfully fool friend and foe alike, Fritz not only unlocked a profound natural ability to dupe others, but a keen sense of when the best time was to bend the truth.     At the age of 10, Fritz decided that he needed to make his own way in life and told his guardians that he was to leave home. The only member of his family to protest was Jukk, but after a stern talking to by Gwanra, the Orc eventually gave his adopted son his blessing. Before he left, Fritz was given some Dwarven armor from the fallen city of Korrvigsguard that Jukk had taken off of a corpse he found not too long after The Great Disturbance. The armor was too heavy for Fritz, but it was perfect. Fritz left Winham and traveled west.

The Birth of the Rabbit Knight:

Fritz traveled the roads from The Broken Crown Alliance directly east into The United Lands of Midvail. Though he was slow to travel the roads, Fritz proved to be quite the survivalist, adapting to his new life of travel quite quickly, applying all that he learned from his parental trio directly to his survival.   At this time, Fritz came across the corpse of a humanoid who was trapped in a divot in the ground. The corpse was well armored and they died with their hand posed upwards, clutching a peculiar looking mace. Fritz, wanting to make the most out of the unfortunate fate of the skeleton took the mace as his own.   Two years into his journey, Fritz came across the town of Fierath within the Brevia Territory of The United Lands of Midvail. At the time, Fierath was in a state of crisis, with half of the town burnt to the ground. Fritz inquired about the rubble and was told that for many months, Fierath was raided by a gang of bandits known as The Horned Menace. Marauders from the bandit gang would come every week and slaughter civilians and guards alike. Fritz had no familiarity with The Horned Menace, but he knew that since he was no longer in Broken Crown territory, the bandits were likely from his homeland. Recognizing an opportunity, Fritz offered to rid Fierath of their bandit problem. At first, the citizens of Fierath were confused by the offer, after all, Fritz was only a child. But his confidence and the plating of his armor made the youth seem quite competent, so he was put up in the local in and hired to take care of the bandit threat.   Days passed and Fritz was treated like royalty by the townsfolk. When the fateful night where the marauders of The Horned Menace came, Fritz took to the street and yelled for them to stop their pillaging. The heavyset, powerful bandits were surprised to see a child try to stop them, a few even let him speak. Given the opportunity to talk, Fritz revealed that he was originally from the Broken Crown and that if they don't leave, they'll ruin his good reputation. The marauders initially didn't care, but Fritz sweetened the pot by telling them that he had a better place for them to raid. The marauders took an interest to this information but insisted that if they were to return to their camp, they needed Fritz to join them and inform their leader of this better raiding location. Fritz agreed, walking out of Fierath much to the surprise of the citizens who hired him.   Fritz and the Horned Menace marauders traveled to their basecamp about an hour east of Fierath where the young mercenary came face to face with the gang's leader, a Minotaur named Kiatris Fearlessbane. Kiatris was livid that not only her marauders came back with no loot, but a child in tow. Fritz thought on his feet, promising Kiatris that there was a much better location up north where the Horned Menace could make far more money. Kiatris was interested, but did not fully buy the lie, insisting on details. Fritz wove an epic tapestry of words in front of The Horned Menace: a Golden City known as Charlios housed deep in the northern mountains. When Kiatris pushed and asked where, Fritz simply said, "It's hidden." Kiatris and The Horned Menace were convinced, thanking Fritz and packing their belongings to travel north to the city of gold.   Fritz returned to Fierath and told the townsfolk that The Horned Menace was gone, telling them that he had snuck up on Kiatris and knocked her out with one blow from his mace, scaring the rest of the gang into leaving. Many townsfolk scoffed at this claim, but upon checking the location where the Horned Menace used to be, the citizens of Fierath celebrated Fritz as their hero. Fritz was housed in Fierath for many months, celebrated and rewarded for his cleverness and bravery. Tales of the youth spread throughout the Brevia Territory, with the "Legend of the Rabbit Knight" told at campfires all around. When Fritz eventually left Fierath, his reputation proceeded him.