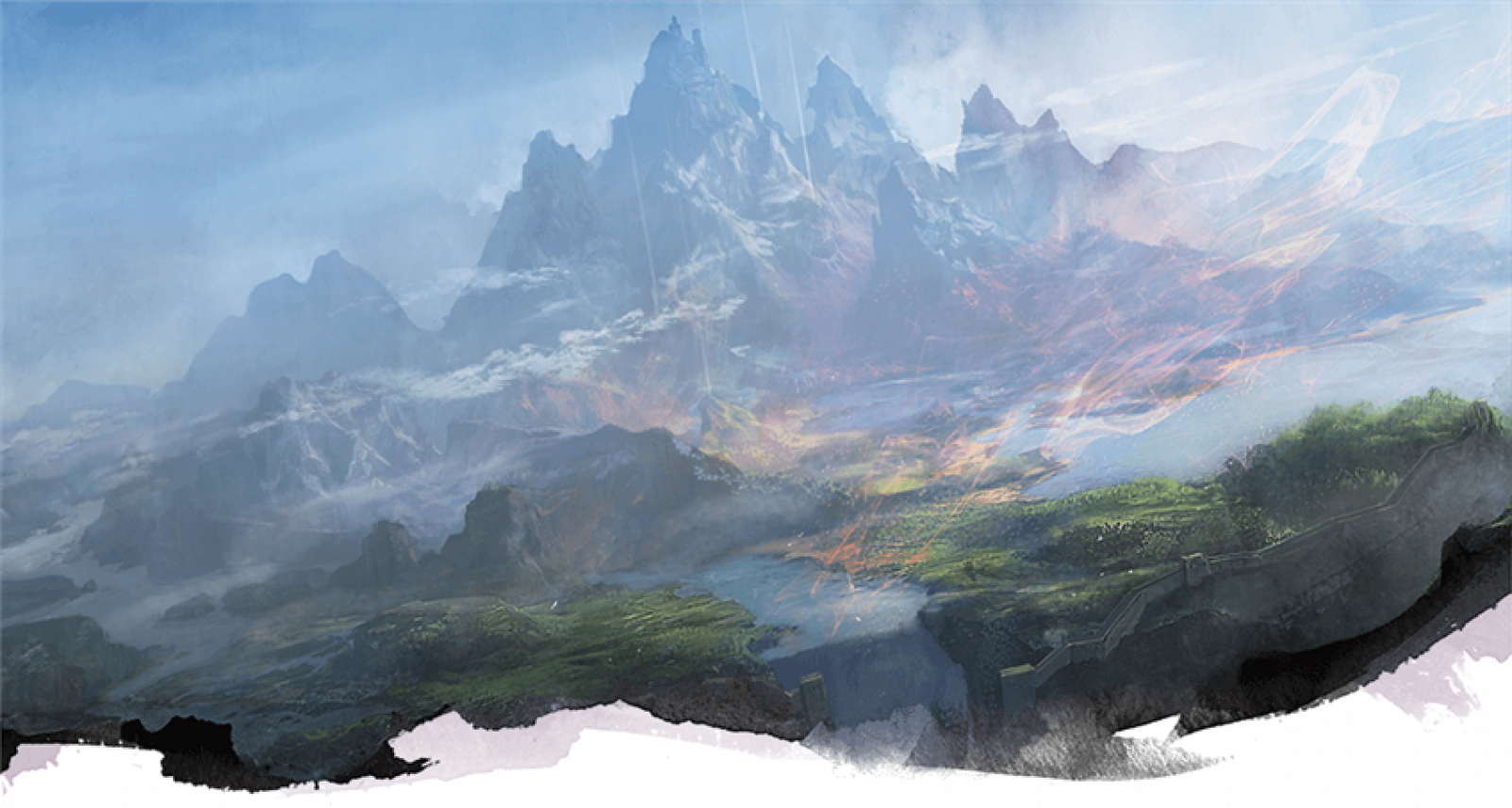 The Seven Heavens of Mount Celestia

The Seven Heavens of Mount Celestia, also called the Seven Mountains of Goodness and Law, Seven Mounting Heavens of Celestia or Seven Heavens, was the pinnacle of lawful goodness in the Great Wheel cosmology. The Seven Heavens were dedicated to goodness shaped by law and justice tempered with mercy.   As an Outer Planes, Celestia was spatially infinite and consisted of seven infinite layers (or sub-planes). The seven individual layers formed a colossal mountain that rose from an infinite sea of holy water on the bottommost layer, to the summit on the topmost layer. Ascending the mountain was analogous to travelling through subsequently higher or 'deeper' layers to the top. Each of the seven layers contained at least one mountain or high structure rising into the sky, and most had whole mountain ranges. The barriers between the seven layers were arranged such that entrances were at the lowest geographical points and exits were at the highest, so a traveler from the Astral Plane would enter the first layer at the base of a mountain (actually, in the surf of the ocean surrounding the mountain) and had to climb to the peak to reach the next layer, only to emerge at the nadir again. The sky of each layer had its own hue which softly bathed everything in gentle shades of luminance.

Celestia's first (bottommost) layer shared borders with the neighboring planes of the The Peaceable Kingdoms of Arcadia and The Twin Paradises of Bytopia; travel was possible between Celestia and these planes at certain locations.   Known as the Silver Heaven, Lunia was the first layer travelers encountered. The sky of Lunia was a nighttime sky filled with stars that illuminated the layer with a silver glow. The color pools of the Astral Plane would deposit visitors in the surf of a vast ocean, the Silver Sea, full of clean, fresh water that had the properties of holy water. The sky above Lunia was perpetually dark, filled with beautiful constellations of silver stars bright enough to illuminate the base of the mountain. The dark, starry Silver Sea was full of many good aquatic beings, including celestial whales and sea elves.   The adjacent beach belonged to an island with a majestic mountain decorated with grand citadels made from polished white stone. Descriptions of the citadels varied among travelers leading cosmologists to theorize that there were many of these mountain islands. Also in the surf of Lunia were the portals to the Twin Paradises, Arcadia, and Concordant Opposition which were large, permanent, free-standing blocks of finished stone. Black granite blocks veined with gold led to Arcadia, white granite blocks with veins of silver led to the Twin Paradises, and red granite blocks flecked with blue took you to Concordant Opposition. Travelers merely had to touch a block to activate the portal.

The second layer, Mecuria was known as the Golden Heaven because a warm golden light suffused everywhere. This layer contained the armory for the noblest warriors who came here for their eternal rest. If necessary, Mecuria was the marshaling ground for the armies of the Heavens.   Gentle hills and lush green valleys comprised this layer, which was also dotted with small settlements of archons and other good-aligned beings. Mercuria was known for its great tombs and monuments to noble fighters and paladins resting on the layer. These warriors were honored during an annual Day of Memory.

Peoni typically dwells in the enchanted meadows of Valon where it is forever spring. Valon is an impossibly verdant field of flowers, rich in delicious nectar, that regenerate themselves overnight. This is the heaven of Peoni’s worshippers. Here, in humble but pleasant cottages, dwell those who have labored hard in life.

The third heaven, also called the Pearly Heaven, or Heaven of Pearls, was a lush and verdant land with crops, meadows, moors, hills, and rolling countryside all bathed in the soft glow from a sky reminiscent of the luster of white pearls. It was somewhat colder than the previous two layers, its slopes often seen covered with a gentle layer of snow. Peaceful brooks and carefully terraced fields were common on Venya.

Solania, the fourth layer, had a sky that glowed like burnished silver and was called the Electrum Heaven, or sometimes the Crystal Heaven. Its valleys were enveloped in mist, fog, and strange scents. The peaks were home to numerous holy shrines, including monasteries and magnificent cathedrals controlled by demigods. Many of the slopes were rich in precious ores and minerals and were mined by populations of dwarves that resided there. Many pilgrims came questing to the roof of this layer in the hopes of finding answers to life's persistent questions.

With a sky not too different from Solania's, the fifth layer was known as the Platinum Heaven. Vast plains and savannas served as the mustering ground for paladins and other lawful good servants. Instead of mountains, Mertion had majestic citadels and huge black spherical domes dotting the plains. Access to the next higher layer was found at the tops of the domes.   The city of Empyrea, also known as the City of Tempered Souls, was located on the edge of a cold mountain lake. It was known to host many magical fountains with powerful healing properties, as well as many hospitals and expert healers.

The sixth layer, Jovar, was known as the Glittering Heaven or the Heaven of Gems. Its hills were studded with precious gemstones that glittered in the light. This layer was actually a vault lined floor to ceiling with huge rubies and garnets that gave off a glow like a hearth fire.   A seemingly unending ziggurat was the home of the Jovarian archons and guarded the entrance to the seventh heaven. Known as Yesteria, the Heavenly City, the huge seven-layered ziggurat displayed a large staircase on each face connecting the terraces of each layer. The stones that made up the city were made of precious gemstones, similar to those seen around the surrounding hills. On the topmost terrace was the bridge of al-Sihal, formed of pure light, where the portal to the topmost layer of Celestia, Chronias, was located, It is guarded by a powerful solar named Xerona who judged who was allowed to enter.

The topmost and final layer of Celestia, Chronias was called the Illuminated Heaven. Little was known of its structure because nothing was ever recorded by the few who had visited and returned. The legends said that Chronias was so good and lawful that it glowed of its own accord and any who entered had all evil and neutrality burned out of them, leaving them inherently good, if they survived.   It was thought to be the ultimate goal of the inhabitants of Celestia to ascend the layers one by one in order to reach Chronias, where their souls would join with the essence of the plane itself.   This plane is often refered to as Heaven by the followers of the god whom rules here, often called the Presence.
Alternative Name(s)
Mount Celesta, The Seven Heavens, and Skyland
Type
Planar Sphere/Grouping
Location under
Outer Planes
Included Locations