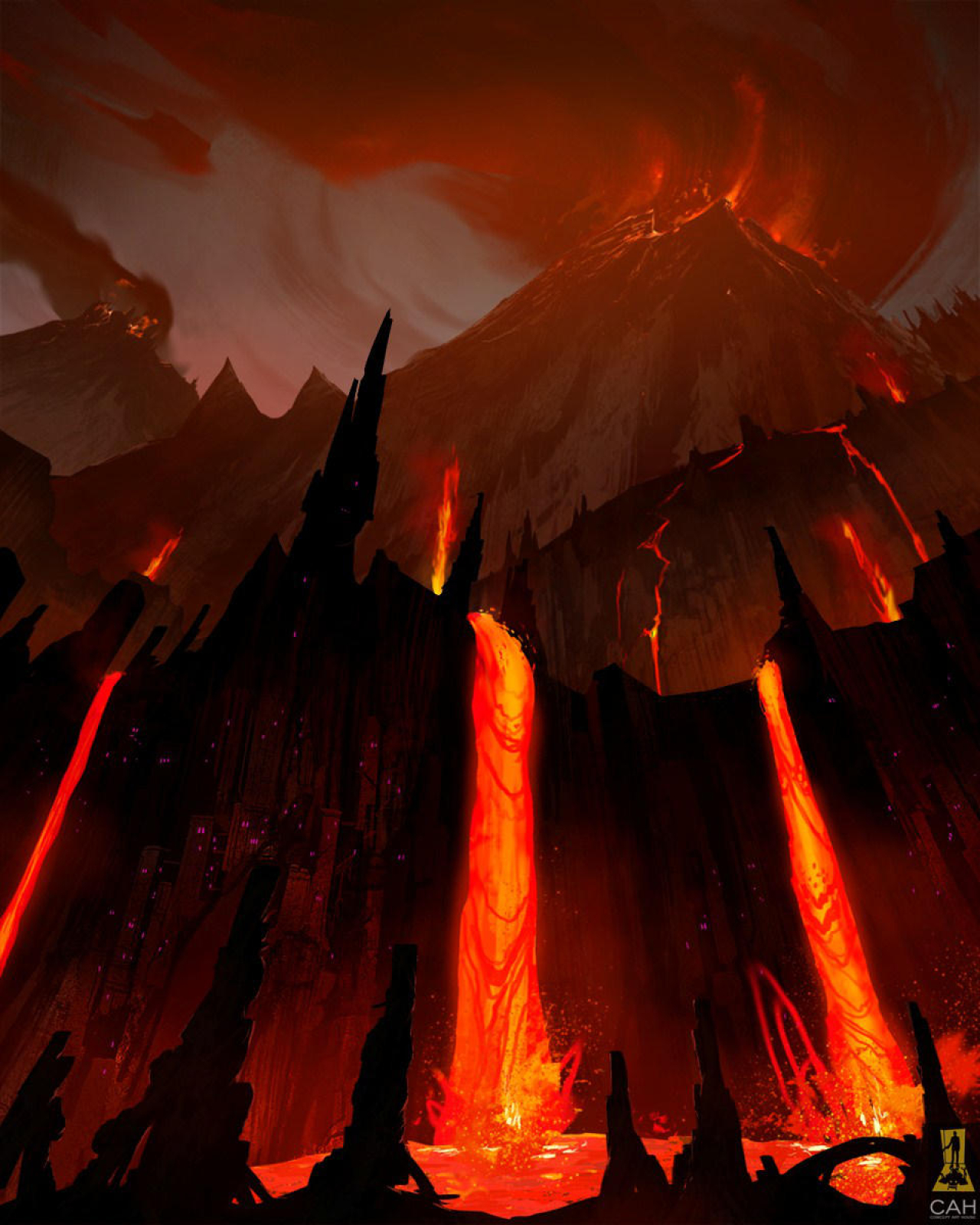 The Bleak Eternity of Gehenna

The Bleak Eternity of Gehenna is an Outer Plane representing alignments between neutral evil and lawful evil. The four layers of Gehenna were infinite planes with gravity at a forty-five degree angle to the ground, making travelers feel as if they were on the side of a mountain with no base or peak. Anyone losing their footing could tumble for miles before finding enough purchase on the slope to halt their fall. Nearly all terrain that was not a river of water or lava was slightly slippery to quite slick. All structures were either built onto or carved into the slopes. Heat and light came from the ground, much like Tarterus, but the source was volcanic: lava flows, vents, fumaroles, and mud pots were very common. Earthquakes and volcanic eruptions occurred often, tearing the land apart. On the hotter layers, unprotected flammable items and creatures would catch fire from the glowing ground or superheated gases being ejected. The barriers between layers were always underground, usually in dead end corridors.

The uppermost layer, Khalas, was the most livable of the four planes with many waterfalls cascading down the slopes, the largest being the river Styx. The Styx followed a rough path down the slope, fell for thousands of feet/meters, ran through twisty rapids before finally disappearing into underground passages. Steam rose into the infinite and empty black sky making the horizon glow a dull red. Khalas touched the Astral Plane and had connections to Hades, The Nine Hells, and Concordant Opposition . The portals looked like black chasms in the floor of deep underground passages. Markings on the walls would often indicate the portal's destination if you could read them.

The second layer of Gehenna was the most violently active layer with lava cascades thousands of miles wide and city-sized volcanoes yawning open on the slopes. The air was foul with acrid smoke for ten miles above the surface and would cause blindness to unprotected eyes and had the effect of a stinking cloud on the lungs. Below ground the air was fresher but stank of burning flesh and hair.

Mungoth was a land of falling ash and burning snow. The furnaces of this layer were fewer and farther apart, allowing ice and snow to build up in the darker places between active areas. Travelers had to brave the never-ending avalanches of wet snow and fiery rock. Underground passages were relatively safe.

The fourth layer was devoid of any volcanic activity, even underground. All was dark and cold. The name of this layer means literally "dead furnaces".

The only creatures known to be native to this plane were the barghests, running through the rifts of Khalas and occasionally found in smaller number on the other layers, and the pyroclastic dragons. All the other creatures originally came from the adjacent lower planes, mostly to hide from more powerful beings that wished to enslave them. Gehenna was often a plane of exile for the less powerful archdevils and daemon taskmasters.
Alternative Name(s)
Gehenna
Type
Dimensional plane
Location under
Outer Planes