The planet Ra/na (anglicized to Ra’na for human pronunciation convenience) is a vibrant world slightly smaller than Earth within the Tau Ceti system. It hosts a diverse and thriving biosphere, which includes a single sophont species who call themselves skae.

Ra'na is the sixth planet out from its sun, Ra/ku (known to humans as Tau Ceti.) It has a single natural satellite: a selenic spherical planetoid called Eo/ma.
Ra'na
Open full size
Ra'na is a terra-class world in the Tau Ceti star system, and the homeworld of the skae.

Ra'na has two independent continents, Apheliotes and Eurus; the other continents form the supercontinent Aeolus (composed of Boreas to the northeast, Caicias on the east/southeast, Zephyrus in the center, and Skeiron in the west). Both Eurus and Apheliotes detached from the Aeolan supercontinent millions of years ago and are moving east-southeast. Apheliotes is also rotating clockwise in its drift, and appears to be on a collision course with Skeiron. There is one subcontinent, Notus which is in the process of colliding with Zephyrus of the Aeolian supercontinent. This geological event, highly similar to the merging of India with Eurasia on Earth, is pushing up a jagged mountain range and is the main reason for the Setekh Desert's appearance. In addition to these, there is also a single sunken continent to the far north above Apheliotes: Aparctias. This continent is techically united with Boreas, as they share the same plate, but the Aparctian end is being severely eroded and subducted, thus dragging almost all of it below sea level.

There are six major archipelagos on the planet, most of which are volcanic/tectonic in origin. The largest of these is by land area is the Boreal Archipelago, which was formed by the tectonic fracturing and glacial erosion of the Boreal-Aparctian continent. The Boreal Archipelago hosts the two largest islands on the planet as well. The second-largest island chain is the Hesperidesian Archipelago, often simply called the Hesperides. The island group was named after the nymphs of the evening who inhabited the land at the western edge of the world in Greco-Roman mythology. These islands were/are formed by tectonic activity, with the convergence of the Aparctian and Skeironese plates compressing and forcing up the seabed.

There are roughly sixteen general types of terrestrial biomes on Ra’na, some of which are lumped together in the biome map due to their basic similarities. Biomic regions include the vast Setekh Desert, the fractured Vulcan Plateau, the boggy Vishnu Swamp Forests, the thriving Ophion and Quetzalcoatl Rainforests, the mysterious New Nazca Steppe, the isolated Aparctias Island, the ancient Nepthys Forests, the frigid Jotuun Tundra, and more.

Ra'na is home to the Ranagenid group of organisms, a highly diverse and successful type of life that includes skae. 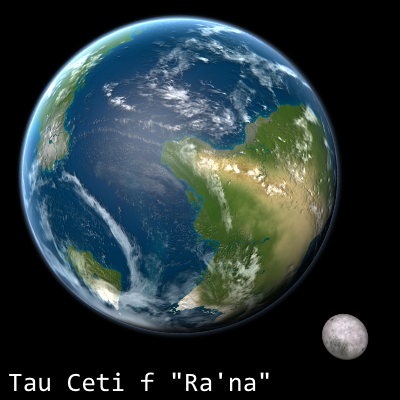