Pluuniima (pʟɯ-ɳi-ɱa), often called skyfins, are a hexapodal, winged, vaguely missile-shaped species of volant sophonts from the planet Niima in the Eonuu (Beta Canum Venaticorum) system. These sophonts are highly unique in many respects, hailing from an oceanic world with a super-dense water atmosphere and rather low gravity. They are uncannily agile, highly intelligent, and remarkably durable, but due to their high metabolic demands they are more prone to hypoxia than most other known sophont species (barring shyxaure). 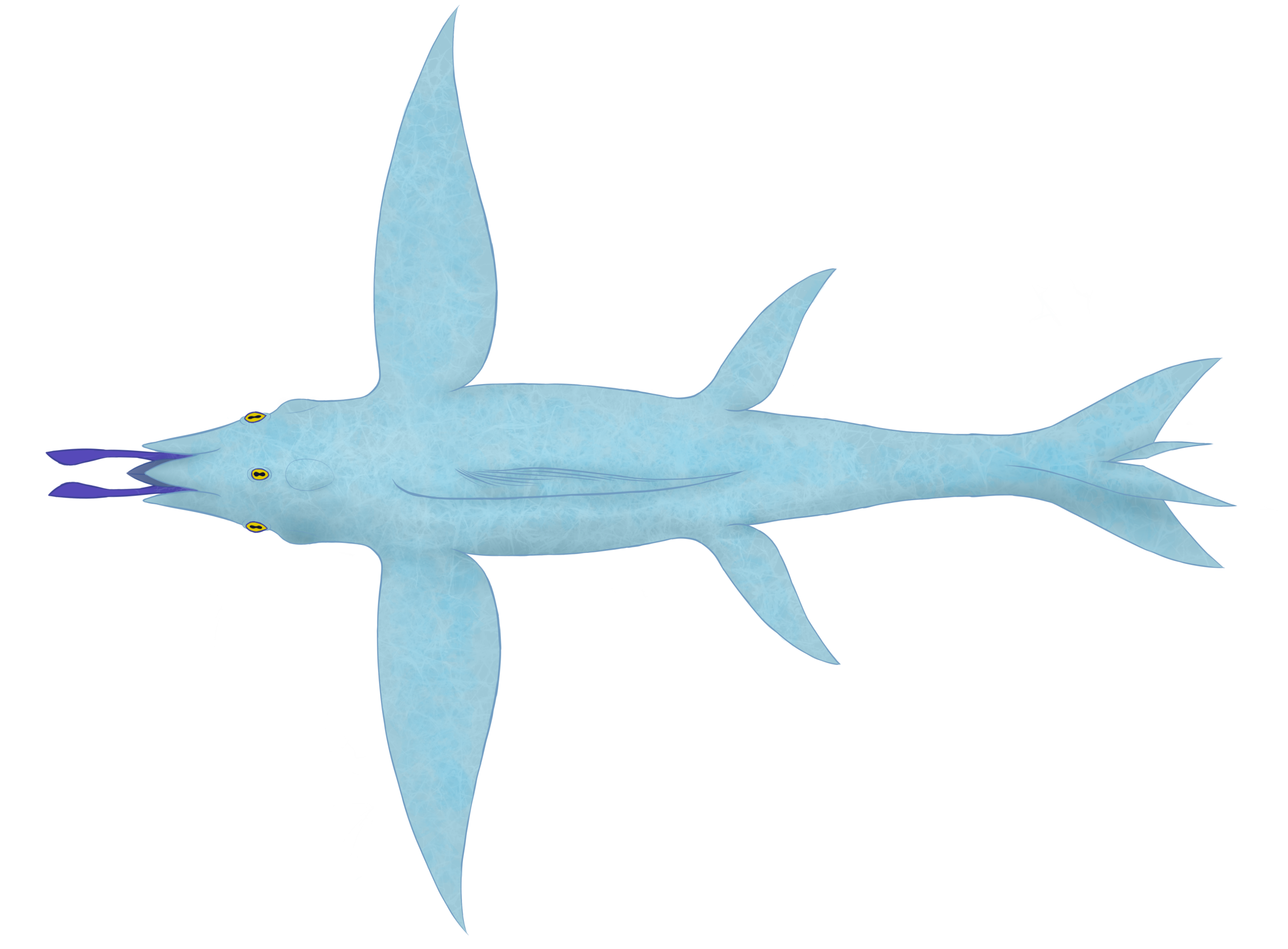 Pluuniima are horizontal hexapterid hexapods with almost perfect quadrilateral symmetry, with two pairs of flipper-like wings used for aerial locomotion (arranged perpendicular to each other just behind the neck) and one smaller pair oriented vertically towards the end of the main torso. The aft torso transitions into a medium-length tail with a small, four-pronged cartilaginous fluke, used as a rudder while in swimming flight. Skyfin skeletons are cartilaginous, though their bones have an internal lattice structure that is reinforced with carbon fibre like those of shyxaure. Their vascular oxygen carrier is haemocyanin, a copper-based protein that turns bright blue when oxidized. Though less efficient than coboglobin or haemoglobin, their highly oxygenated environment balances out this drawback.

The visual sense is absolutely critical to pluuniima. They are incredibly visual beings, having to navigate an environment with functionally endless three dimensions. Skyfin vision is facilitated by four focal eyes, set in equidistant circumference around the skull, which are able to detect motion, definite shape, spatial orientation, and a wide spectrum of color ranging from near-infrared well into the ultraviolet. They also have photosensitive pits running down their bodies in four lines, able to detect shadow and, by extension, movement.

Skyfins, like humans and shyxaure, are also very reliant on their auditory sense, facilitated by four sonar organs set just behind each eye as well as a pair of statocysts within the skull.

Skyfin olfactory sense is considerably more sensitive than that of humans, with a thin band of sensory hairs just behind the mouth.

Pluuniima are almost exclusively found on their homeworld Niima, having no technological capacity of their own to achieve spaceflight and preferring to avoid contact with their spacefaring counterparts. Pluuniima are largely solitary beings, with a family unit no larger than four occupying a vast hunting territory of up to a hundred cubic kilometres. For this reason, Niima has nothing resembling organized civilization, but it and its inhabitants are still respected as sovereign by the USSC.

And spyglass strikes with another amazing article! I really loved reading about the pluuniimaans! The way you describe them feels very reminiscent of old classic sci fi authors like Issac Asimov, Larry Niven and Arthur . C. Clarke, whose novels I love to death. Other than that, this article is a technical masterpiece and a perfect primer to a hard sci fi sophont ! I had some questions though. Have the pluunimaans ever encountered any other sophont species or mankind? Have they ever encountered the pluuniimaans? But still, this is an amazing article! Congrats spyg and keep up the amazing work!