Hemera is one of two planets orbiting Barnard's Star, and a vital link in the interstellar transport network. Though tidally locked, Hemera has an extremely active magnetosphere and oceans of liquid water, and the atmosphere is a fairly Earthlike mix of nitrogen and oxygen. The most comfortable place to live is the terminator, where it is permanently twilight, and this band of dusk hosts the largest concentration of humans on the planet. Although Barnard is a flare star, Hemera’s powerful magnetosphere protects its surface from the worst of the solar radiation.   Hemera has endemic complex life (the most visually notable being the vibrant red plants), as well as the ruins of an ancient civilization. At one point, Hemera bore an indigenous sophont species called the skgri'i, who were driven to extinction after several millennia of interstellar expansion.

Hemera
Open full size
Hemera is a terra-class planet in the Barnard's Star system, being the former homeworld of the skgri'i and a current human-inhabited world.

Hemera effectively has two very large continents that are diverging remarkably slowly, even on a geological scale. The "western" continent, Dawn, plays host to a series of sprawling grasslands and low, hammocked hills; whilst the "eastern" continent, Dusk, is more heavily forested. Hemera still bears the scars of its ancient war in the form of large craters that litter the surface, caused by the impact of orbital kinetic weapons. Interstellar warfare is a horrifying prospect, and Hemera was fortunate enough to keep its biosphere mostly intact; many other satyr worlds were rendered utterly uninhabitable for millennia.

Hemera is a rather dry world, but it still holds appreciable quantities of surface water. The vast majority of said water is locked in the immense ice cap that blankets the antisolar hemisphere. The liquid water on Hemera is mostly contained within the somewhat shallow global ocean, with freshwater accumulating in ancient crater sites and occasionally flowing out to meet the sea.

Hemera's solar hemisphere is, like most other tidally locked worlds, dominated by a monstrous permanent cyclonic storm. The Maelstrom, as Hemerans have dubbed it, is the result of intense oceanic and atmospheric heating near the zenith point of the planet, and as a result its powerful winds distribute moisture back towards the terminator and even out the extreme temperature gradient that Hemera experiences due to its tidal locking.

Hemera is home to the Hemeragenid group of organisms, which is a common form of life in the Ophuichus-Ara region of known space.

Three individuals try to understand the nature and purpose of a large, powerful, and vaguely unethical superscience organization.

A series of audio snapshots of life at various places and times in known space. 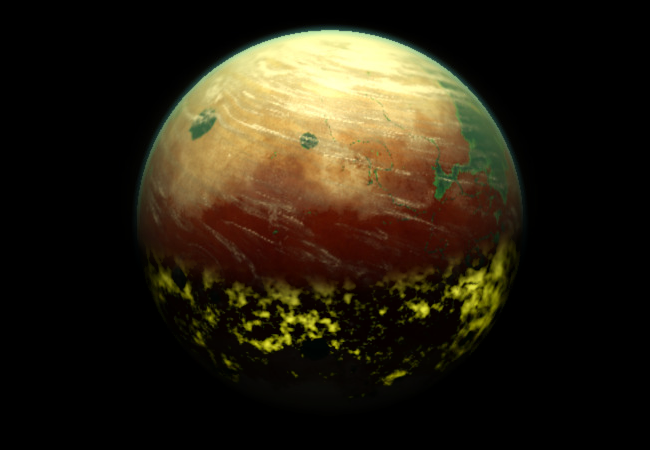 The planet Hemera, as seen from high orbit.

This looks so cool! What program did you use for the map?

Thank you! The maps in the Diaspora are all made using the planet editor in SpaceEngine, and tweaked further in Paint.NET.