Enceladus is the sixth-largest moon of Saturn; roughly a tenth the size of the largest cronian moon, Titan. Enceladus a cryonic world akin to Europa covered by almost pure water ice, making its albedo one of the highest of any planetary body in the Sol system. Despite its size, Enceladus is quite hydrologically active and as such has a wide range of surface features, ranging from heavily cratered static regions to tectonically deformed terrains with emergent vapor plumes. In fact, these geysers are responsible for Saturn's almost-invisible E-ring, beyond the bright inner ring system. Though small, it hosts a thriving human settlement.

Enceladus is second-closest major moon of the planet Saturn, which is the sixth planet from its sun Sol. It orbits at roughly 4 times its parent planet's radius, just outside the main rings. Its rotation is synchronized to its orbit, and thus one Enceladian hemisphere (the Saturnbound face, or "near side") is constantly visible to Saturn while the other (the spacebound face, or "far side") is never visible. Enceladus is locked in a 2:1 orbital resonance with the moon Dione, resulting in the excess kinetic energy's dissipation into tidal heating.

The internal structure of Enceladus is fairly typical of cryonae: an icy shell of volatiles conceals an ocean of liquid water surrounding a slightly porous silicate core. The subglacial sea, concentrated mainly around the south polar region, is warmed by a combination of tidal friction and the faint radioactive decay that occurs deep within the moon's core. In fact, the miniature-scale core dynamo is responsible for the intense, permanent cryovolcanism at the south pole of Enceladus, where deep fissures in the surface spew plumes of mineral-enriched seawater into the void at many times the Enceladian escape velocity.

Enceladus hosts an unusual branch of simple terragenid organisms derived from the microbes that arrived on Chicxulub impact ejecta. 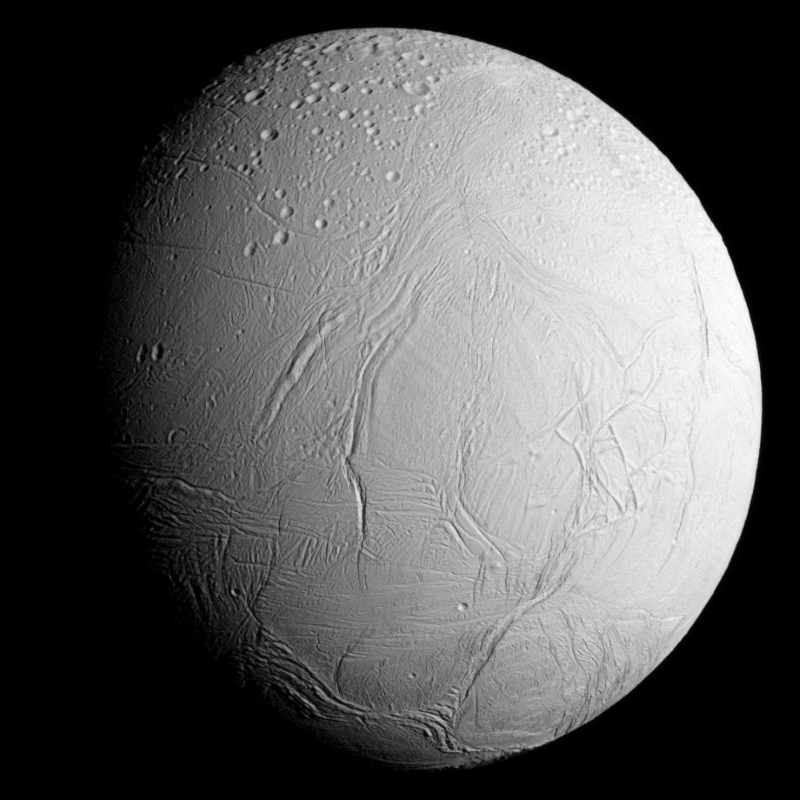