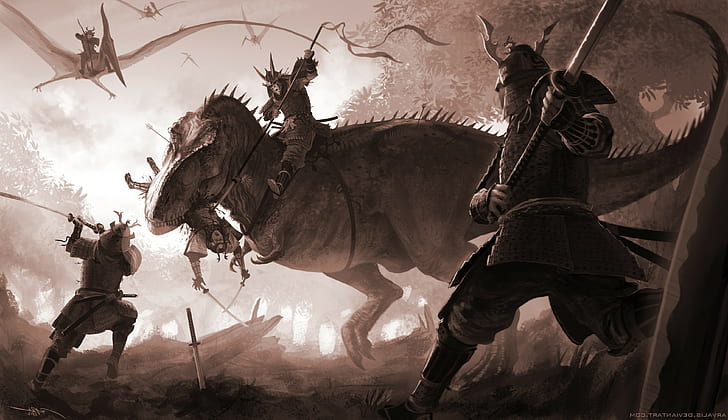 In the era after the extinction of the dragons and before humanity discovered the enigma of iron and clawed their way up to dominate Dharguun, when the world was still young and barbaric was an Age of Heroes. A time shared between the brutal people of the world and the savage beasts born of primordial beginnings, now forgotten to the world. A landscape in which cities of alien splendor, remnants of prehumanoid times, lay scattered across the map like gems spilled from a dead thief's hand and magic, wild and mysterious, holds power over young and superstitious civilisations.   The Land of Hivokia lies in turmoil. Warlord Grisfin con Lanre of neighbouring Pelonia has invaded with a hoard of conquering centaurs. Lord Morinari, head of the Noble Clan of Satochi, and his army rode out to meet them but were routed, scattered and defeated. Lord Morinari and his daughter Shio were captured and executed, their fate serving as a warning to the other Noble Clans who renewed their infighting like drunkards over a spilled drink. Some Clans fell to treachery and deceit. Some remained silent through fear. Other have their mouths stuffed with gold. But none among them spoke out against Grisfin when the King is assassinated and the Warlord of Pelonia rests the crown of Hivokia upon his satisfied brow.   Warlord Grisfin gathered the dormant eggs of the long departed dragons and at the commencement of the Celestial alignment, completed a ritual to summons dragons back into existence. His plan was executed flawlessly, yet he had not counted on dragonkind being as intelligent, as ruthless and as ambitious as he was. Dragons returned unto the world, seeking out their former place at the top of the food chain and the hierarchy of rule, loosening the Warlords iron grip on the Clans. In Hivokia now, only chaos reigns.