She's closely connected with ideas of mischief, chaos, and trickery. Sometimes this is considered her divine domain; sometimes it's just a deep character flaw or evidence of her infernal origins.

The Wraith has had many supernatural abilities throughout mythology. She carries immortality (or the secret of rebirth, depending on what culture you ask), as the most consistent thing. She's been said to have the power to talk to animals (especially birds), to change shape at will (again, birds are a supposed favorite), to hypnotize with her eyes and/or her words, to have influence over the natural world, to commune with the supernatural and/or the dead, to make herself invisible, to travel instantly from one place to another, and many more. How many of those are true-to-life and how many are exaggerations over time is the subject of much speculation.

The Wraith is most often portrayed as wearing blue, though no explanation has been given as to why this might be.

The history of the Scarlet Wraith is long, scattered, and riddled with contradictions. No one knows her true origins, nor her true intentions, nor really anything about her at all. What little is known of her comes through longstanding and widespread myths and legends. 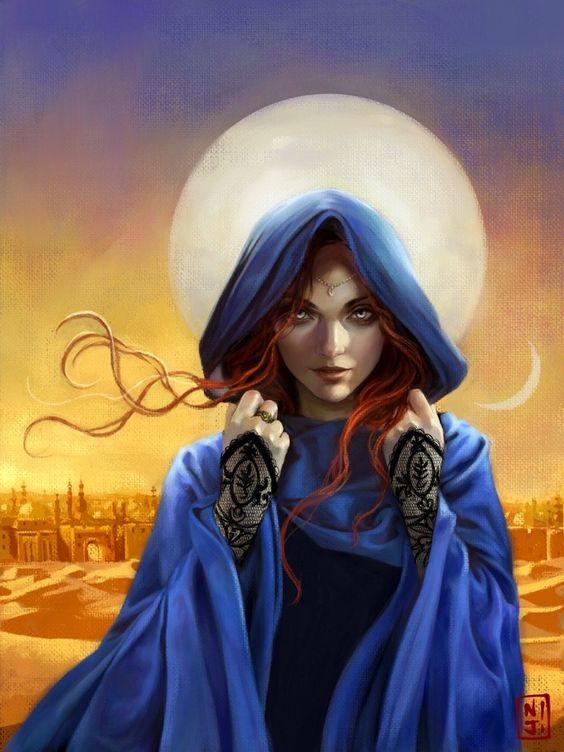 The foreign princess by Francesca Resta
Some say the Wraith originated in Kersir, a claim upheld by the fact that Eilis holds the earliest written record of her existence. This has helped give rise to the theory that the Wraith is a Noshka, born among The Ayan to sow destruction and chaos wherever she goes. While this theory certainly holds up with the character portrayed in most known myths about the Wraith (whatever name she might appear under), it struggles against the claim that the Veldani's oral legend of the figure dates back to their days as a free nation, prior to the Ayan's spread so far eastward. There's some argument as to whether these two details are mutually exclusive, since the Wraith is seen as a far-wanderer, but such speculation is best left to bards, tourists, and others with too much time on their hands. 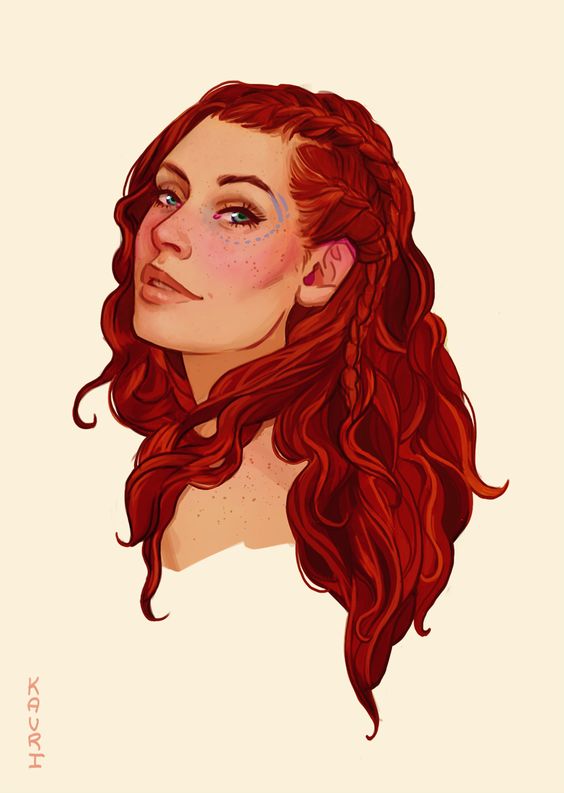 There are other claims that the Wraith was originally Sacharan, based on her fair skin and red hair, an ordinary girl who dabbled in witchcraft as a young woman and was consequently banished from her homeland by superstitious neighbors and left to wander the world for the rest of her days. If these stories include an explanation for her long life, which has allowed her to appear in myths all over the world over many generations, it usually involves a tale of the Wraith selling her soul to a demon, thus earning her "wraith" status. It is in these stories that she's given the name Fionwyn, a name likely referring to her white skin and wine-red hair. After her banishment, she's given the new name Cailledhear, which may be a compound meaning "red witch" or may be akin to a term meaning "lost," either of which would be appropriate to the story. 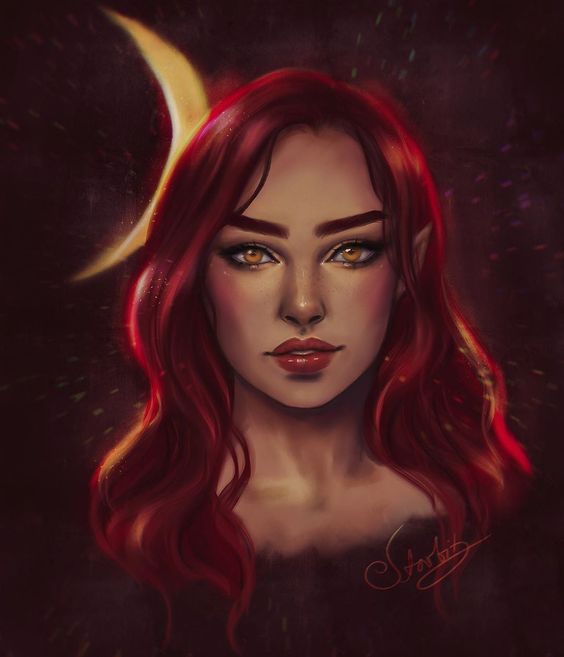 Bryce Quinlan by starbitart
The Wraith is known also to the Fendari, in whose mythology she's a red star-goddess. She appears with their pale skin, angular features, and copper eyes, but with red hair that sets her apart from all other Fendari and separates her also from the other star-gods. Here her name is Kochelva. Discontent with her place in the heavens, where she feels caged and grows bored of observing the world from afar, Kochelva comes down to Deseran and begins her long wanderings across its surface. Myth foretells that once she has seen all there is to see on Deseran, she will return to the Fendari and ascend back into the heavens.   Though her origins differ, and though some cultures paint her in a positive light while others paint her as a villain, a few things remain the same across mythos. Most notable, of course, are her universal red hair and pale coloring (though "pale" can be a relative term). She's also routinely described as "otherworldly" (sometimes as a positive, sometimes as a negative), "elegant," "ethereal," "bewitching" or "entrancing," etc. She always appears with poise and a stately presence which commands respect... or sometimes fear. And she is always portrayed as a trickster, whether her games benefit the heroes of the stories or not.

The Wraith never remains in one place long enough to put down firm roots, but across legend she's been portrayed in such range of occupations as dancer, barmaid, queen, priestess, bard, and merchant.

According to Teraki myth, the Wraith once captured a phoenix single-handedly and forced it to teach her the secrets of rebirth.   In Sacharan legend she's said to have caused the eruption of a volcano near the village of Pairghal, destroying almost the entire village as revenge for her banishment.   In Fendari myth, Kochelva is believed to have stolen the astronomical knowledge of her sibling stars and given it to the Fendari, thus aiding them in their advancement and helping to put them so far ahead of their neighbors. Some say this theft—and the long memory of the stars—is why Kochelva's pilgrimage lasts so long and she does not return to them. 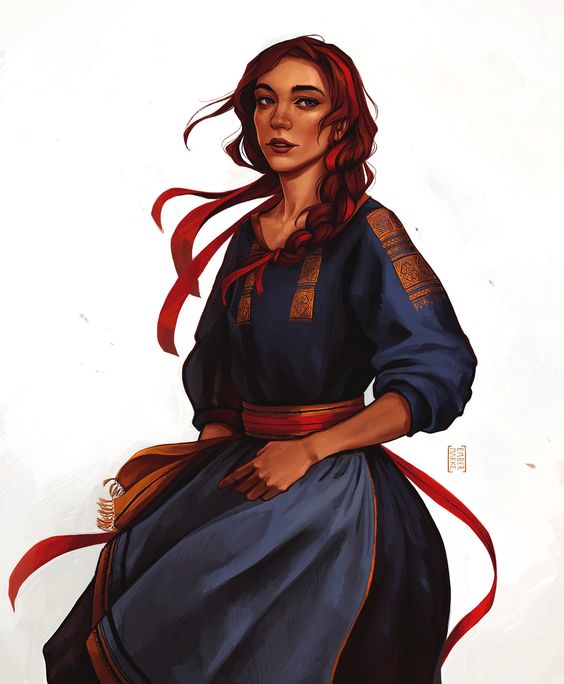 In Veldani legend, the Wraith (known as Rojeytamar) disguises herself as a common baker and turns the children and youth of Anteira toward her ways of sorcery and lawlessness through honeyed words and clever twists of truth. When the Veldani discover this, however, they pray that Arba would send them aid to banish Rojeytamar from their land, and he sends The Seadim. This group of divinely blessed warriors defeats Rojeytamar's sorcery and chases her out of Veldan, before coming to stand guard against her return. Ever since, the Seadim have appeared when needed to vanquish physical spiritual threats like the Noshka, and Rojeytamar has not dared enter Veldani history again.   In a similar Eilisian story, Dimaala (as she is called) is a priestess who begins to teach heresy in the temple, veiling her lies in half-truths and appealing to her audience's desires to persuade them of her path. When the matter is exposed (as are her illicit relations with several high-ranking priests), the high priests of all the gods band together to select the most loyal priest-warriors and send this elite group to vanquish Dimaala. Though the chosen priest-warriors are able to weaken her, and permanently cripple her use of magic through an attack fueled by Ydar's blessing, Dimaala slips away at the last moment and is never seen again. 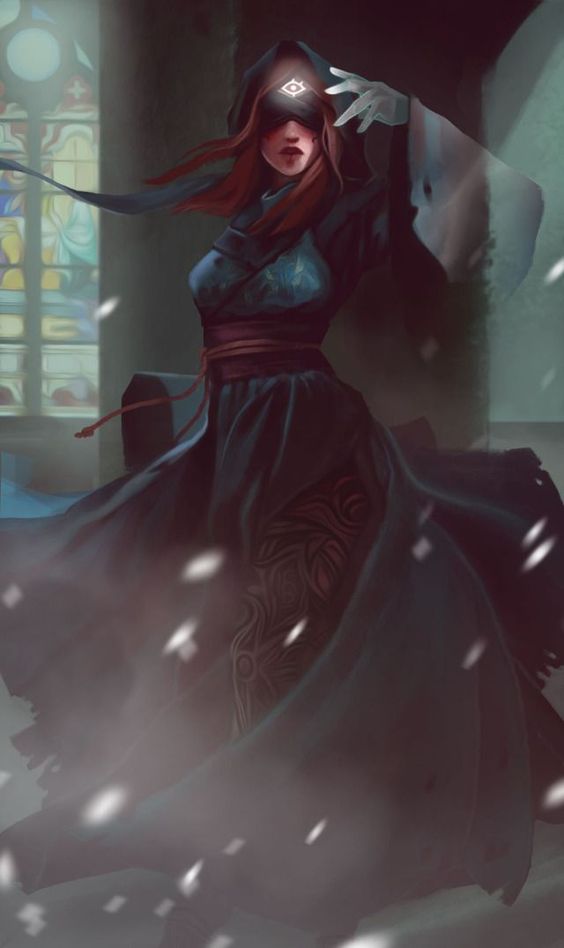 Divine Classification
Goddess, demon, half-demon, or none of the above, depending on who you ask
Age
Unknown
Date of Birth
Unknown
Circumstances of Birth
Unknown
Circumstances of Death
Some theorize that she cannot die or be killed; others weave myths of how some magic weapon or another is the only thing capable of killing her.
Children
Presented Sex
Female
Eyes
Most often gold, copper, or green, but there's no strict agreement. They're always described as "captivating" or "bewitching."
Hair
Red, always, though it can be anywhere from copper to wine. It always has a wild sort of wave.
Skin Tone/Pigmentation
Often paler than those around her; some call her almost ghostly pale.
Height
She's often tall and stately; no specifics
Uncategorized

This article bears various levels of influence from my recent study of biblical giants, books on Tolkien that featured notes on etymology, and recent reading on mythology (especially Norse mythology and myths of Loki). Pinterest also had a significant hand, and all of the scattered pieces were brought together by musings on what sort of myths Sachara would have that one of my novel characters would be familiar with. Overall, I'm really happy with how this article turned out!