As yet another example of the ingenuity of the engineers in Giz Moranth, 'the scuttler' is mechnically-driven contraption capable of hauling heavy cargo great distances without the aid of pack animals or magical assistance. It is so named for the dozens of legs, which shift incrementally for forward movement, similar to crabs. Aemark scholars puzzle over the details of its inner workings in an attempt to discern weaknesses or reverse-engineer key components, but to little avail. 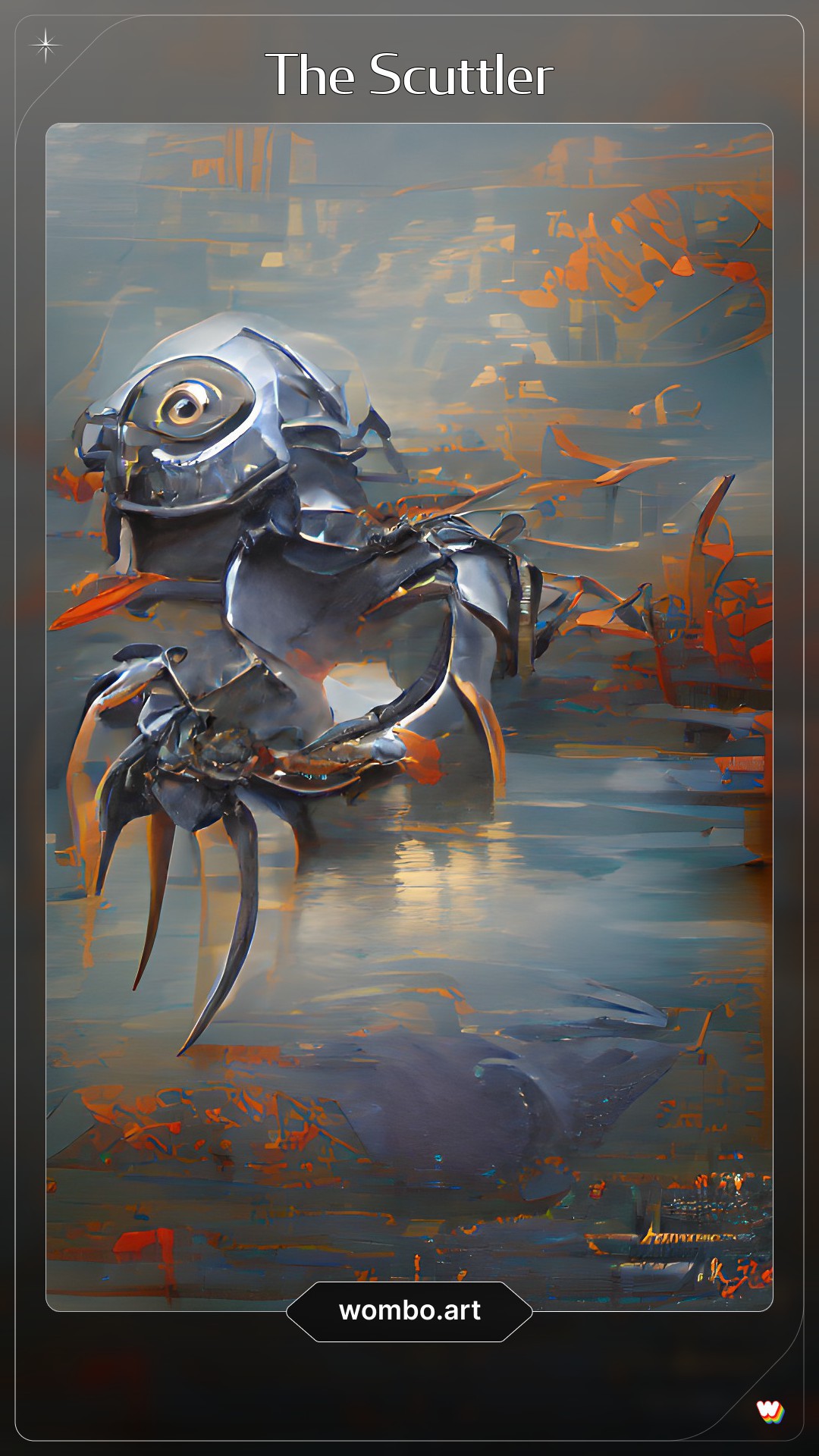 The Scuttler by Wombo ("Mechcanical Crab
Scuttle Steel Gray"
Like most 'Gizmos' developed by the Kaokut Coalition, the scuttler features metal alloys for a structural frame and synthetic 'hard rubbers' for its outer shell. Neither has been successfully recreated by Aemark alchemists, though some efforts have borne limited success in developing alternatives to conventional carpentry for vehicular protection. Observed scuttlers appear heavily worn, with dirt and grime caking the vast majority of its exposed parts, none of which impedes its operation.   With the rubber shell, the Gizmo appears as a large beetle-like creature moving along the ground at speeds rivaling a galloping horse. A Kaokutian will sit at the front of the mechanical beast, pulling levers and adjusting dials in a curious manner. Scouts thus far failed to identify a clear pattern other than the left- and right-most levers causing the vehicle to turn left or right respectively. The cacophonous sound of the machination is audible from nearly a mile away, resulting in the Coalition utilizing it solely for transport only within its borders for fear of being waylaid by attackers. Most versions include seating for guards armed with ranged weaponry, further discouraging a strike.

There is little doubt the initial designs were developed in Giz Moranth, where almost all such machinations hail from. However, it remains unclear whether the actual production of scuttlers is within the city or elsewhere in Kaokut territory. Over time, the Coalition has shifted production of key resources, including food and military assets, eastward to distance the infrastructure from the Aemark Kingdom's advance. Spies identified numerous military factories on the outskirts of both Giz Moranth and Jenganth, but none appear to relate to the scuttler.

The surprisingly gentle ride is supported by a series of small legs on either side of the scuttler. Each moves simultaneously up and down as well as forward and back in an oval shape to propel the overall contraption. Every leg integrates springs to dampen shocks and connects to a central underbelly of unknown purpose, but presumably providing the locomotive energy. The movement of the 'claws' generates a wave of sorts, repeatedly progressing down the length of the vehicle. With between one and two waves completing per second and a total length of 20 feet, the approximate maximum speed is 30 miles per hour.   At its rear, a smoke-spewing block of metal vibrates harshly against its casing when in operation. Scholars presume this 'motive device' provides the necessary energy to move the scuttler's claws in their rotation. The current theory suggests the process is a controlled, sustained fire of some form. However, the Aemark military cannot confirm this.

Kaokutian fuel is a closely guarded secret and Aemark spies have yet to discover the ingredients in its development, at least according to publicly available sources. Regardless, the fuel is a translucent brown liquid poured into a compartment at the rear, nearby the motive device, which continually spews blackened smoke. Wizards using aether sight have confirmed it is mundane and unenchanted. Military handbooks detail the liquid's flammable properties, which is valuable data in tactical planning and especially for pyromancers, as well as its pungent, chemical smell when poured or spilled.

The Coalition operates dozens of scuttlers to supply the central and southeastern warfronts. While an oxen-led caravan carries as much cargo as a scuttler, the continuous operation and speed it generates far outstrip Aemark's efforts. Fortunately, they appear to be expensive and difficult to manufacture, limiting their use to the most pressing of supplies, such as high-value objects, medicine, and explosives (a favored weapon in Kaokut's military).
Type of Vehicle
Mechanized Caravan

If you have any information regarding the design or manufacture of Kaokutian 'Gizmos,' please report to your local military outpost with haste. The Aemark Kingdom rewards loyal citizens for their efforts.   How any citizen is going to acquire this knowledge is beyond me. Though I suppose desperate people will do desperate things.
Soundtrack by SK Kage (via AIVA.ai)
Written by Sheyla Enelladalcol Aeleat