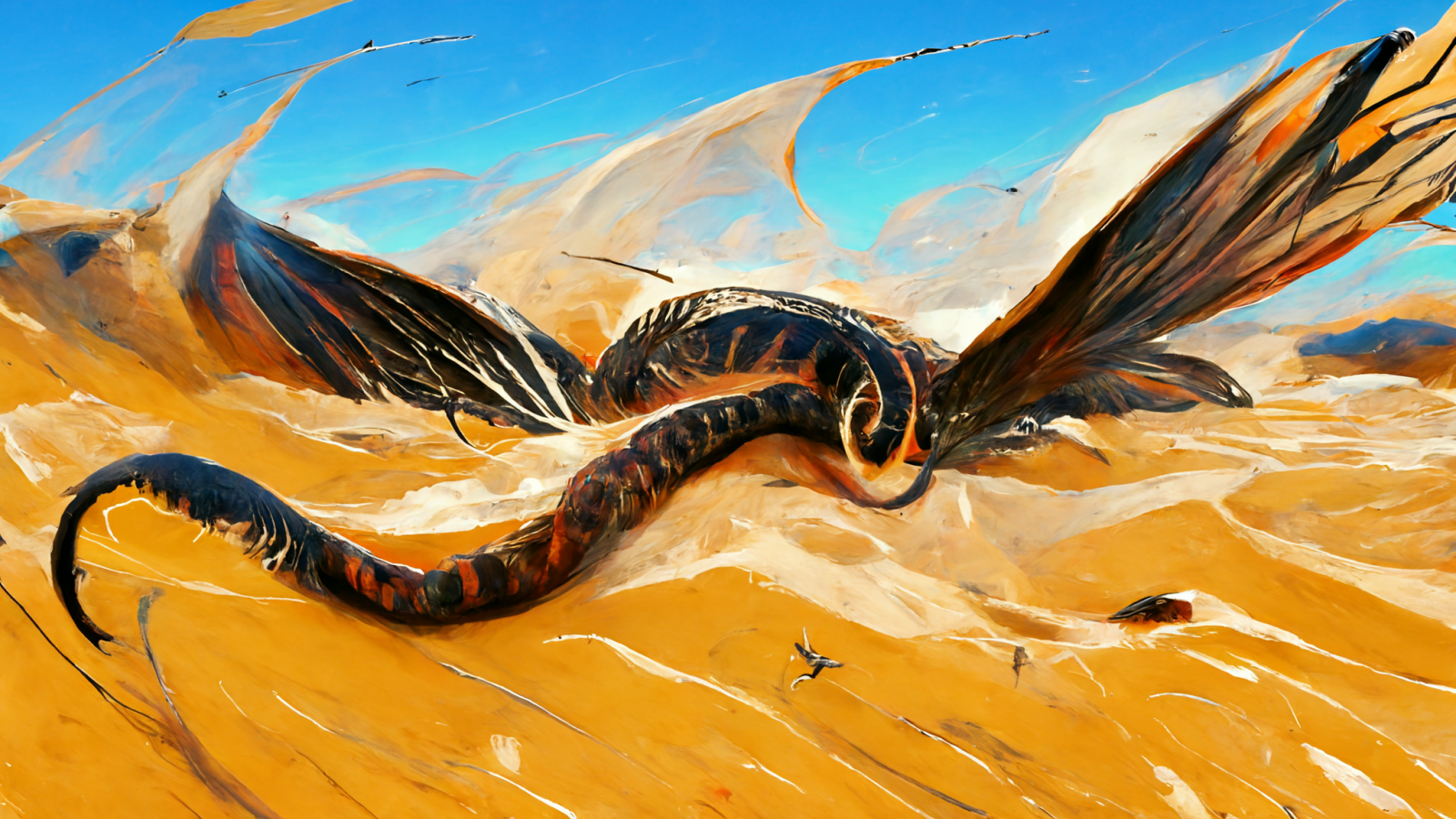 The elegant Serpens Aren, referred to as the 'sand serpent,' is a unique reptile and one of the few species native to the Great Desert. Unlike typical snakes, the serpent grows wings during their lifecycle, which retract flush with their body, but provide a surprising level of mobility. Similar to the ginroc lizard, the animal subsists primarily on ambient mana instead of vegetation or prey, though the occasional mouse is necessary for its long-term growth. 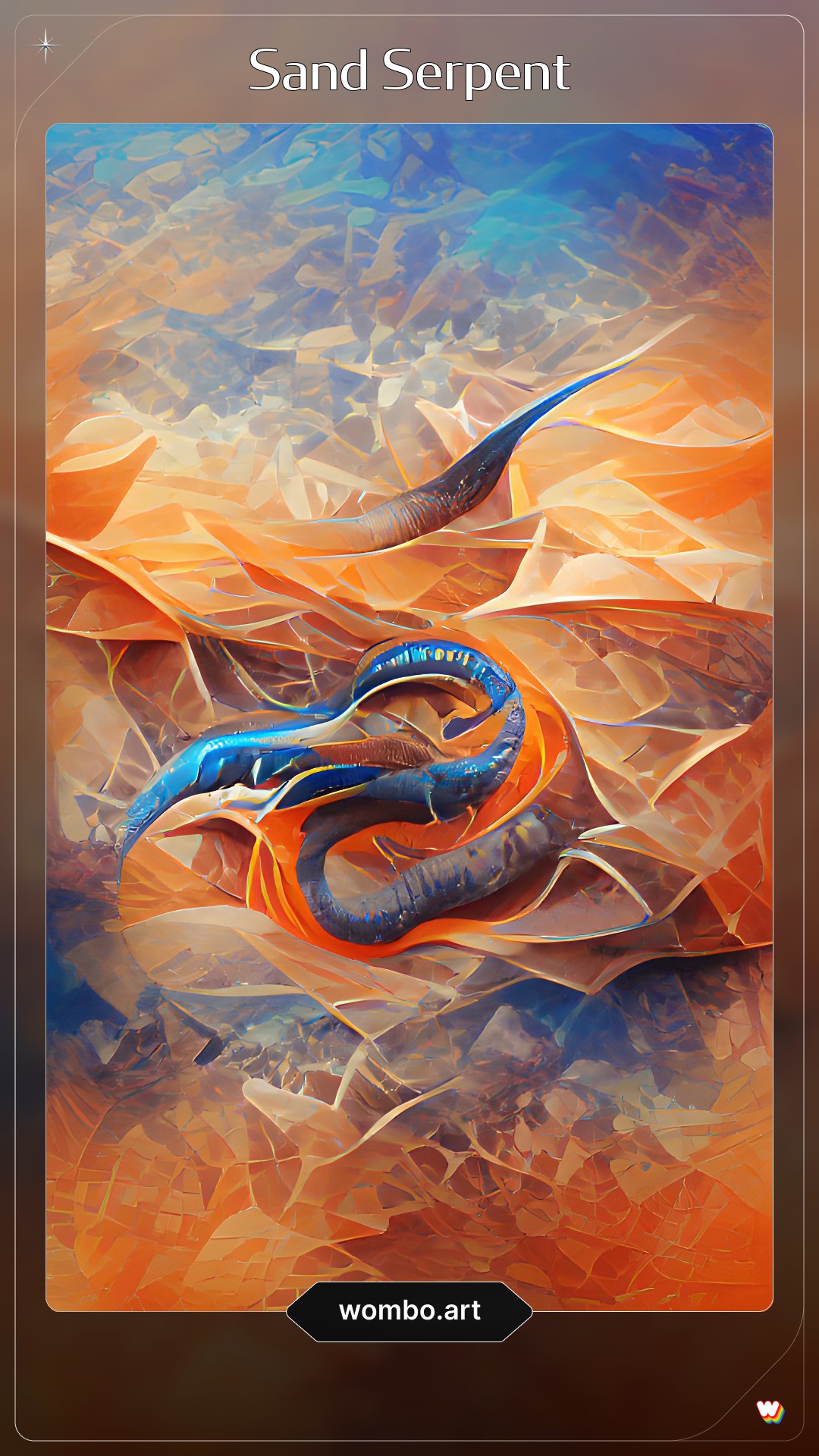 Sand Serpent by Wombo ("Sand Serpent Snake Wings
Wings Air Sky Orange Blue")
Sand serpents are classified under the reptile family, but they are the only species with the ability to fly. While scholars argue about whether they are actually snakes or a different class of creature, colloquial usage and local custom ignores the nuance identified by biologists. Ranging from four to five feet when fully grown with a wingspan of up to 54 inches, they are not particularly large compared to the terrifyingly huge reptilian specimens from the Pontar Delta or Druln Wetland known for eating humanoids.   Scale color ranges across orange and yellow hues, but when viewed from some angles appears light blue. The odd coloration likely aids hunting, wherein a rodent might momentarily confuse the predator for a section of sky. The brief confusion may offer enough of a window for the snake to strike and kill the target using the strength of its jaws to break bones and crush organs. Few hunts have been witnessed, but the speed of strikes is remarkably swift for a sizeable, hovering animal.

As with other mana-rich animals, sand serpents exhibit high intelligence (for non-domesticated fauna). Through unknown mechanisms, they recognize and differentiate between scholars and hunters, with some actively seeking interaction with the former. Their friendlier nature allows for closer visual study, but they immediately flee if touched. Perhaps using similar capabilities, the creature manages to find burrowing mice and beetles for sustenance without any external sign of their presence.

No records exist of sand serpent eggs or early stages of life prior to reaching one- to two-foot length. Further, despite efforts to locate them, scholars lack examples of nests or natural remains. Some believe the snake births live offspring rather than depositing eggs in a nest, which would be highly unusual for a reptile. Regardless, the best estimates available indicate they grow one foot per five to ten years; a slow overall rate compared with related species. Availability of prey and the necessities of desert survival likely limit maturation.   Unfortunately, serpents removed from their natural habitat usually die within three months. The reason for this swift death is unclear, but the characteristics of the Great Desert's climate are difficult to match without extensive preparation and magic enchantments. Even then, lifespan is extended only a few months. Scholars suspect this is due to the ambient mana in the region, which the animal has adapted to absorb.

In contrast with avians, sand serpents do not fly in straight lines or swooping curves. Their mesmerizing patterns of helixes, circles, and loops could not possibly keep them aloft without magical assistance. Ulysses Senelnlaesal Xavier observed 'The hovering, bobbing caricature of a legless dragon offers a glimpse of potential precursors to other gifted reptiles.' The prevailing theory regarding magically-assisted flight posits the surface area converts the creature's mana into aeromantic uplift. Larger wings contribute to greater force and more rapid consumption of mana reserves.

In centuries past, Kaokutians attributed mystical properties to sand serpents and featured them in religious texts and rituals. Notably, pilgrimages to the desert to witness and touch one were commonplace for the deeply devoted. However, as the Akaran Doctrine established itself as the core religion of the Coalition, this reverence eroded in favor of artistic depictions and interpretations of the creature.

Unfortunately, like all exotic animals, people desire them as a delicacy. Chefs and experts claim the meat of sand serpents is the most lush and succulent of reptile, but these are heavily biased statements because of the exorbitant prices of the product. Overhunting in Kaokut is a pervasive problem across ecosystems and types of animal. Extinction is a very real possibility for the serpent were it not for their innate intelligence and ability to avoid hunting parties. Trapping or shooting them is also especially difficult, which restricts how quickly the population dwindles.
Scientific Name
Serpen Aren

Interested in the unique and rich world taste of snake? The succulent flesh of ginroc? Order the freshest and highest quality meat from Rich Reptiles, a specialty outfit located in Aemark City!   Why do humans eat Ginrocs?! It's horrifying! Sand serpents? I can live with it, but not those cute lizards...
Soundtrack by SK Kage (via AIVA.ai)
Written by Sheyla Enelladalcol Aeleat

Answering: "Α species that survives in an unlikely place"
Visit Shikya's Competition Page Check all other answers to this prompt Competition Homepage