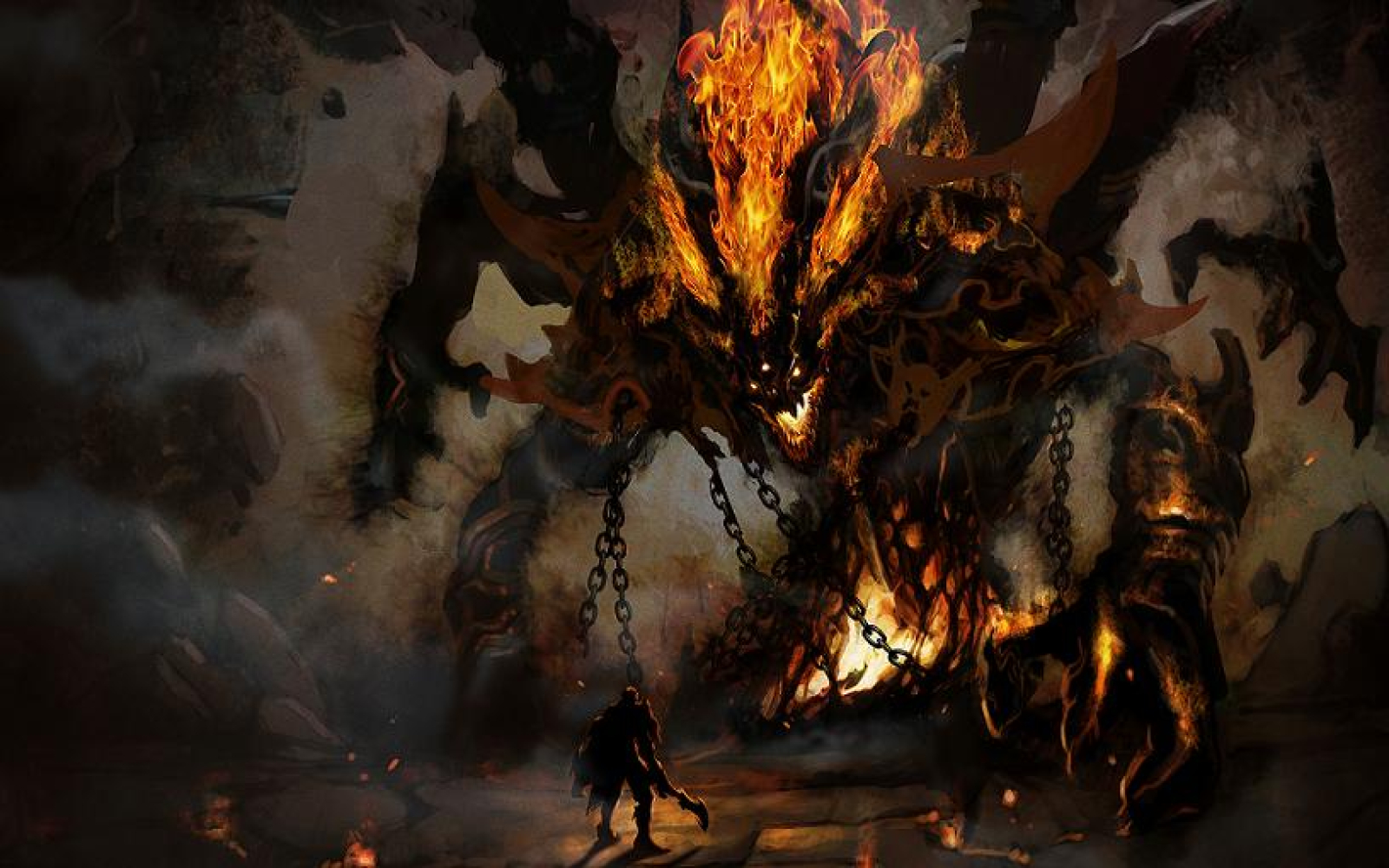 This act consists mainly of the realisation of Tharizdun and the fact that his chains may not hold forever. It is when the adventurers will have to realise the threat of the chained god and also begin to see the extent of what he can do. The Party will have to do research into long forgotten information to see the patterns of his touch and his methods of chaos.   This act will be mainly focused of finding cults and destroying them, as well as fetch quests to find ancient tomes and knowledge. The party will also be beaten into submission on a few occasions to prove the power of Tharizdun.

Act 2: Hunt For The Keys

After learning about the 333 gems that bind Tharizdun to his prison the party must find them! Find the gems win win win! This part will essentialy be one adventure. Use the module "The forgotten temple of Tharizdun". The module takes place in the middle of a mountain range, that will be incredibly hard to find. Remember, these are the single most important gems in the world so they wouldn't be easy to find.   Just run the module, make it hard to get to the module's beginning(using act one to explain it), and you should be fine!

The party has to now decide what to do with the gems. They essentially have two options destroy the gems, or hide and scatter them. Make it very clear that the minute the gems leave the prime material plane, they break and Tharizdun's chains are weakened. So the question remains: Scatter or destroy?

This will be mostly up to the players how they want to hide them. It will be a quest to find ancient sphinx's to keep them, crypts, tombs, deals with Lich's, This would probably be the highest politics part of the campaign as they negotiate payments and agreements with powerful entities. Scattering them at the bottom of the ocean isn't sufficient. They have a tendency to return to the surface, or create magical attention grabbing effects when left unattended.

Let them decide how they want to destroy them, let them struggle with the idea that if they destroy them and then cannot control the magic, Tharizdun will be free. Then let them make deals with powerful casters and discuss how to destroy such items. Maybe they must go on a quest for a conclave of ancient dragons who will help only after the orb of dragonkind is retrieved. This would make sense in parallel to the "Main Plot: Law" regarding Tiamat, as Tiamat works against Tharizdun "Enemy of my Enemy" situation. Once the gems are destroyed move on for a while, look at the "Main Plot: Law" for a while until the next scene.

Act 4Climax: The Chained Ones Return!

The midnight begins to envelop Dawnforge slowly as Tharizdun begins to materialise. The entire world is racked with fear, all will help in the effort, it's either Die or Die trying. This section will mainly be assembling an army with which to fight Tharizdun. By the time the armies arrive Tharizdun is already close to being formed, you must act quickly, every second wasted is 50 more people who might die. Tharizdun starts forming from the east, slowly engulfing Dawnforge. Every 4 days His scorched lands advance 1 hex column towards the west. Pretty self explanatory, climax, fight, who knows if they win!(No seriously Don't pull any punches..)

Either they died(in which case skip to Act 6), or they triumphed! If they triumphed this will be essentially about a session long and it will be about restoring cities, and helping citizens rise up from the ashes. It will be bittersweet, really. But they are essentially brandished as gods, people bow down to the party as if in the presence of all that is divine. Who knows, maybe religions are made out of this stuff.

Act 6Resolution: The Nature Of The Abyss

A low grumble echos throughout the players minds, one all to familiar to them,(play this https://www.youtube.com/watch?v=CJiG15euUes) dark spirals start to swirl around them as the room they occupy starts to distort. make a sanity save. If they fail they simply die, screaming inconceivably, tearing their skin apart, biting at their limbs, plucking out their eyes, ripping their ears off. If they succeed they learn of the nature of the abyss.   The abyss is not simply another plane with infinite layers, each layer is another parallel multiverse. Each layer is a world where Tharizdun won. Every demon lord is simply an incarnation of Tharizdun. You did not defeat Thrizdun, you defeated one of them. Dawnforge will never be safe.

Horror, Entropy, Chaos, Insanity, Evil. Dark spirals adorn many areas that this plot revolves around, as well as chains.

It’s been about 180,000 years since the Dawnforge, the event of which the land owes its name. The Dawnforge was the destruction of the midnight, and the birth of the new world. The midnight was a godless time, Demons warred with Devils, who warred with Hobgoblins, who warred with Orcs. The Cinder Wastes of what would become Dawnforge, burned bright, fueled by the ferocity of war, and burning on the blood of the fallen. Maglubiyet, the goblinoid god of war, was unfortunately the first god to touch the world. Baphomet, the demon lord was next, followed by Tiamat, the dragon goddess of evil, to rule over the demons. Gruumsh, the orc god of storms and war was the final of the original evils. But in the darkest shadows of the midnight stirred another god. Tharizdun, God of eternal darkness(A long pause). From the west came a new power, the beginning of the dawn. You see all nights must end, but(a beat) it is darkest before dawn. Tiamat, saw the first rays of light and began to prepare. First she severed her 5 heads, and let them grow into the first chromatic dragons, white, green, blue, black, and red. They grew into their own dragons and became the first of their kind, it was only a matter of days before Tiamat had regrown her heads. But, she made a mistake. A pool of her blood was struck by a ray of dawn and from it, Bahamut, dragon god of good was born. The rest of the gods prepared as well, but all were too hasty and allowed light to strike them. The first good touched the cinder wastes. The ‘Dawn Kin’ as they came to be known, were as follows: Bahamut, dragon god of good., Heironeous, god of chivalry and valor, who became the leader of the ranks of the dawn., Pholtus, god of light and law, who brought the first order to the wastes., Fharlanghn, god of horizons and travel, who carried the dawn upon his back. In the 20 so years of the dawn the rest of the gods came into the limelight. The Dawn war was volatile and crazed, but both sides knew how it would end. The dawn could not be stopped, light would continue to flood the world. Slowly the Cinder wastes turned to soil, and and pools of magma turned to water. The gods of evil started to flee, some hid in the shadows, places the light couldn’t reach, but Tharizdun, had a plan. He took what remained of the Cinder Wastes and created his own plane of existence, beyond the reach of the prime material plane, beyond the reach of the dawn. And so as such the Abyss was formed, a distorsion, and sinister spiral of madness, of the prime material plane, where the dawn could not touch. After creating and abandoning the Abyss, he marshalled an army against all the other gods and the primordials. The other gods defeated him, but could not destroy him so they bound and chained him in a secret location known only to them. There he festers dreaming of escape........ Many other gods took his idea, creating their own planes of existence. Some were formed as accidental bi-products of forming others. Eventually though, the material plane found balance.   And thus the day was anew. And 180,000 years later, nobody knows what time it is. No one knows weather we are seconds before dusk or in the pleasant glow of midday. The one thing people do know, is that life – for now – is ok. Common folk live in large cities for the most part. Markets line the streets, and kids run along sidewalks, chasing each other in make believe games, as their parents attempt to control them, to no avail. The political climate at the moment is more or less stable. But there are rumours of the occult taking root like a plague.

Put an end to what Tharizdun is planning, by either killing him, or strengthening his prison. The conflict here is one against chaos and evil. Demons, creations of Tharizdun, will fight for control over the prime material plane, while also fighting devils, lawful evil creations of Tiamat. The party will have to fight both forces or encourage combat between them in order to thwart Tharizduns plans.

Tharizdun is the eternal threat, the biggest threat. To end the time of Tharizdun is to eternalise the Dawn, to immortalise good in the multiverse as the dominant power. The goal is to rid the world of Tharizdun for good.

Demons want to stop forces of good, the Assimar in the party is captured, Demons hunt the party, trouble keeps finding them. Then they learn of the significance of the treat after going into a cultist dungeon.

Ok so like this is the over arching plot of the whole campaign, anyone that they ally with over the whole thing is probably an ally here.

Ok so like this is the over arching plot of the whole campaign, anyone that they meet who is neautral is probably neutral here here.

Tiamat and the Devils she commands also want to destroy Tharizdun but are definitely still evil. Keep an eye on them, any time you do work together they might betray you. They probably think you will do the same to them. Keep your friends close but your enemies closer.

Tharizdun is the ultimate adversary. Along with his demons and stuff.

As long as you are somewhere other than the far realm, Tharizdun's threat looms.
Plot type
Main Plot: Chaos