Joey Kang is the alias of an Australian gangster and bomb operator, he builds, supplies and utilises several explosive weapons for illegal conduct. He is also notable for wearing a pair of giant mechanical feet which allow him to bounce high up in the air like a kangaroo (as his nickname suggests).

He was once part of a heist group which consisted of six other criminals, all of them planned and partook in several successful heists which would propel them into infamy within the criminal underground and would give them a name within the news. However, this heist group was disbanded after an incident occurred where one of their members, Iggy, was captured by police and taken into custody. This resulted in a break out where Iggy was freed and a gunfight ensued between the group and police, who considered it to be getting too dangerous to continue heisting. Each member took their cut and went their separate ways, trying to stay low for a while from police.

In the beginning, before he had his alias and was a part of the criminal empire, he lived in Australia with his mother and sister. Him and his sister had an interest in diamonds, gems and other items within that variety, they would commonly steal these items and look at them closely with a magnifying glass. He was forced to move out by his mother with his sister after they had been both constantly getting into trouble and also living unemployed. Their mother gave them two options; move out or get a job and start paying the bills. They both chose to move out and fly to America for new beginnings.   Joeys first encounter with the criminal side of the world was when he was robbed at the store he worked at by a man named 'Luiz'. He then found himself in the midst of a gang operation that Luiz was apart of, being face to face with several members telling him to not mention what happened that day to anyone else. A man referred to as 'Bob from Baghdad' was sent to clean up the damages within the shop and this man was the one who really initiated Joey and got him into the game.   Joey and his landlord Luiz, weren't getting on so well, especially after the attempted robbery. It eventually led to an argument on the top of the apartment stairs, Luiz was yelling at Joey for the rent money which he did not have yet as he was not paid until the next week, Luiz did not care for any excuses however. The argument ended with Joey pushing Luiz down the stairs, Luiz bashed his head on one of the low ceilings as well as the several steps downwards before landing on the floor. Joey stood in shock as he stared at the now dead body of Luiz. The next day, Joey called Bob in a panic and paid him to clean up the scene to which he did.   Joey would then land in even hotter water when it would turn out that Luiz was an important, but unstable, member of a dangerous gang. The gang was considering killing him outright until being talked down by one of the initial members who was at the robbery, a man named Walker who acted as their full time PI. The gang then sent out a man named Grant to watch over Joey for the next few months, Grant would terrorise Joey and would end up being the main threat within Joeys life.

Joeys first job in America was as a cashier for a local convenience store. This was one of the few jobs that Joey could get with his very few qualifications and the main reason fro taking the job was to make some cash and be able to pay the rent at their apartment.

Joey and Iggy were once in a very brief relationship during the time they were in the heist group. It wasn't considered an official relationship by anyone, it was a bit complicated, they had a love-hate relationship. Once the heist groups disbanded, they broke it off there, Joey was tired of Iggy and started to dislike the way he was acting. They have currently, both moved on, Iggy still has a level of respect for Joey who seems to have disdain for Iggy. 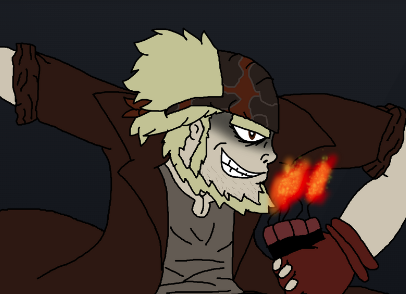