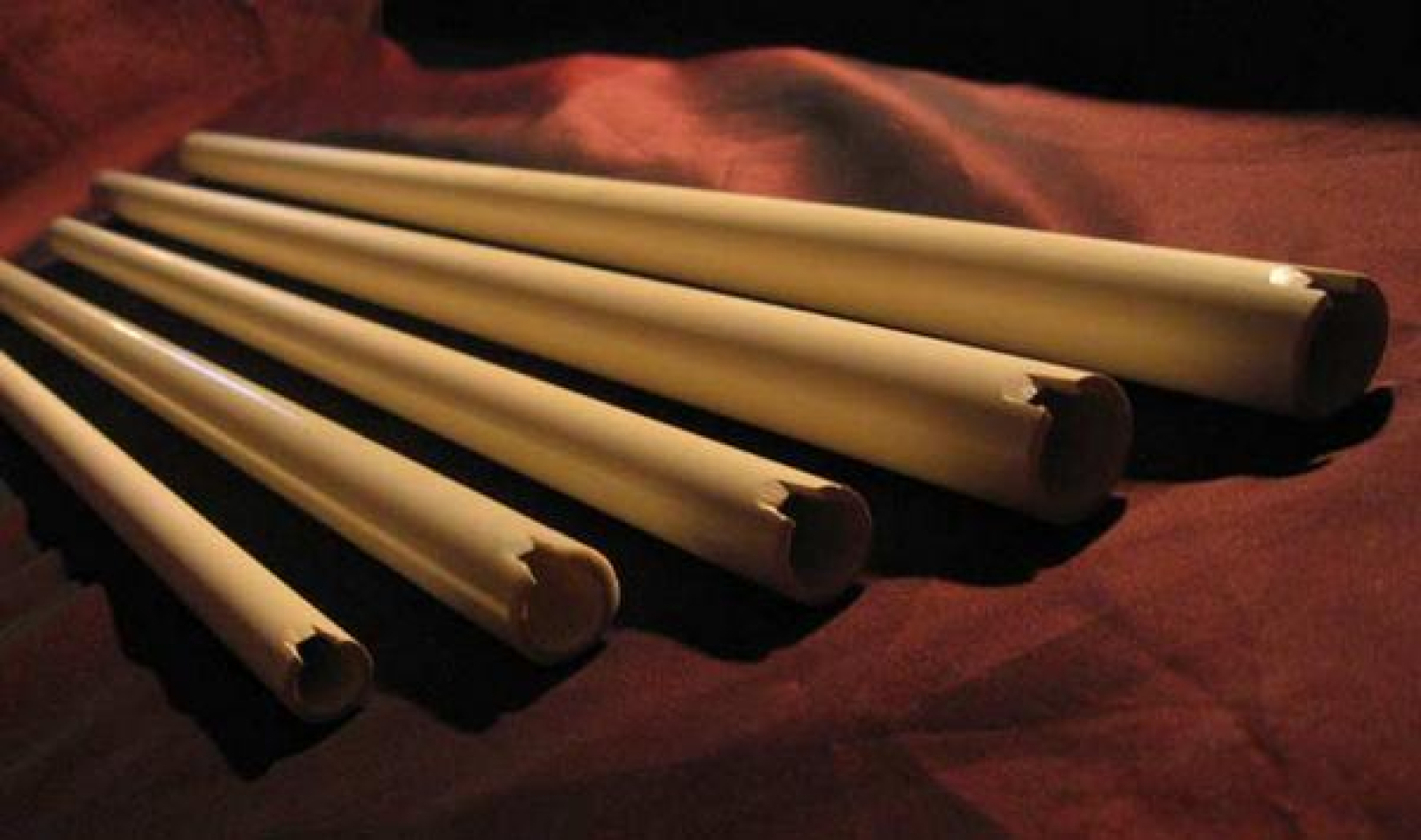 A Child's Memory of the Games   I could only see darkness at first until one stone on each side draped the two Whistlers in a dull red light. As they approached, their footsteps echoed throughout and the colors changed with each stone they touched. I was nervous with anticipation as they stopped facing each other only 10 feet apart. The slightest whistle touched my ears and I knew they had pulled their first two Chutes. Beautiful music erupted over the stands and all other noises vanished. As the Whistlers moved over the stones in a dance of color, they would spin the Chutes in the air. I could see the small flashes as they spun around and hear the amazing sounds as they whistled. There was a constant beat as each Whistler took steps one after the other in almost perfect unison. It ended with a splash and clatter as one of them slipped on the stone and the crowd erupted with a roar. I have seen many matches then, but I will remember my first one forever.   Tragedy invites Inspiration   Whistling Stones is a musical sport created from tragedy. Shortly after the collapse of the Alvinian Cavern that killed over 300,000 people. Koryn Voricinith found children playing in the rubble, dirty and hurt, but not defeated. She felt Cynosure had led her to this point to inspire all the people. This tragedy had left the people emotionally crushed and pushed to the limit. She needed to bring joy back to their lives.   The children were swinging small chutes that whistled through the air. They were leaping from rock to rock. Some were swinging them like swords and others were trying figure out how to change the noise in the chute. Koryn watched them for several minutes before walking over and played with them. She examined the chutes and helped the kids bore new holes to change the sounds as they swung around. She also realized they were more agile than her as she skinned her legs and knees trying to jump around the rocks. The laughter and joy brought around more people and soon they had as many adults as children playing on the rocks.   Koryn created the Whistle Chutes from that experience.     Let the Games Begin   The Arcane Stratum created a massive auditorium and stadium to host competitions. With the help of the Engineering guild, the auditorium would amplify the sounds of the competitors so that even the highest seats would hear the action. They also placed special stones in the floor that would glow when stepped on. This allowed people to follow the action without the need to light up the entire stadium. These stones would sit in two feet of water (this is required for the stones to glow) separated by a few inches which creates another obstacle for competitors.   The other Strata were told of the requirements and started making their smaller auditoriums similarly as to train the competitors properly. This is how the Stone Games were created.   Whistle Dance   Whistle Chutes became very popular for entertainment at the games held at the Auditorium, but soon the minstrels wanted to compete as well. They created their own rules based on the history of their beloved instrument. They would duel with music and dance. The new stadium was perfect for their purposes and the Whistle Dance was created.   Whistle Dancing is very simple. You play the Chutes while moving across the stones on the pond in a dance. If you dropped a Chute or slip on a stone you lost. While the rules were simple, mastering the dance was very difficult. The stones were usually slick from the water, the light stones can sometimes be distracting and the participants have to listen to each other to impress the judges. They would have to make immediate alterations based on the sounds of the competitor. This is to create a pleasing sound for the audience and to show the judges their flexibility. Their shoes are designed to create a beat of sorts as they move across the stones. These movements have to very deliberate and also match the opponents. Although the goal is to outlast the opponent, there are many strategies to win the trophies. The different categories allow for some to focus on a variety of skills. Some will create more complicated dances to confuse their opponent into making a mistake. Others will concentrate more on the sounds they make and adjust continuously to overshadow the sounds of their opponent. A select few will attempt to master versatility, the ability to create music solely from the sounds of their opponent, harmonizing with them. Lastly, some will learn to work the crowd, using tricks to keep the crowd focused on them. This usually involves mastering the light stones themselves and using the shoes to occasionally draw all attention to themselves. Whistlers would practice every Cycle at local ponds and then compete at the Stratum event to see who would represent their community at the yearly games.   Although there are many events at the games, this quickly became a fan favorite and legends would be born.

Special shoes and Chutes are given to competitors of the Whistle Dance. The shoes have a metal bottom which allows their steps to echo in the auditorium. The Chutes are coated with a special chemical that lights up slightly when friction from the air hits it. This allows some visual aid to the audience as the Whistlers make their music.
Awards   The Games have a lot of awards, but the Whistle Dance has some very specific ones. Last Whistler -- Given to the Whistler that has won all their duels. Long Dance -- Given to the Whistler who remained dancing the longest during any of their matches. Crowd Noise -- Given to the Whistler with the loudest applause. A very prestigious award. Amazing Symphony -- Given to both the duelists who created the best music together. Judged by teachers and retired masters of the Chutes.   These awards are given during the last day of the Games and reflect the best Whistlers in Crevice.
Playing the Whistle Chutes   They are a group of chutes of varying sizes although most are close to two feet long with holes in them that create music when swung through the air. Most kids are taught to use two chutes and create simple music with them. Those who wish to master the Whistle Chutes will use 4 or more chutes. Many times there will be groups of people who will play them together tossing them to each other allowing them to use more Chutes. The Masters have been known to use 8 chutes to create some of the most magnificent works of art known to the city.   To use more than two Chutes, one has to also learn to juggle and to quickly switch Chutes. Most will wear the additional Chutes on a specially designed belt. As they throw one in the air, they will switch out another. Experts and masters will juggle 3-5 of them at the same time, where timing of the throws and speed of the Chutes could alter the sounds. Groups have been known to use as many as 15 Chutes throwing them back and forth to create complicated works. Whistle Chutes and the Games   Using Whistle Chutes to create music has become very popular and something taught even in the schools to young children. Competitive music did not start until the Age of Brilliance and arcane magic in the city became stronger. During this age, great auditoriums were created to hear music created from Chutes and other instruments. Great orchestras would swallow the whole strata in inspirational ecstasy. Soon the auditoriums were also used for wrestling and dueling for the entertainment of larger groups. These were hard to see for most people in the darkness of the underground, so sounds were integrated into many of the competitions. The duelists were given special armor and weapons that would create a very distinct sound when they were struck. This allowed for the audience to hear the action. From this, competitive Whistlers would find their own way into the games and create an epic tradition that would continuously improve the moral and faith of the people.

I really enjoyed the origin story of this, how it arose from making a good thing from a horrible tragedy. This almost makes me think of a more musical ice-skating or something, given teh described movements, which I liked. Maybe I missed it but admittedly I'm unsure how big the chutes are, though, and I am unsure what the victor gets.