Potbellies are a species of medium-sized dragon from the Kazaharo Cliffs on Dracosei.

Potbellies have a noticeably flat body. Their torsos are round and flat, with a thick, warty hide that is a dark orange colour. Their legs stick outwards and are incredibly flexible, capable of bending in directions other dragons cannot do with theirs. Potbelly heads are large, with a pointed nose that is good for tunneling in the ground. Their beaks are hard, and are capable of spiralling like a drill to clear the ground in front of them. Most lack a tail, which helps them avoid getting stuck in their tight tunnels when they need to turn round. An incredibly rare mutation has occurred where potbellies are born with tails; these are usually wide and flat. Very few have ever been recorded with a tail, as it is about a 1 in a 1 million occurrence. The dragons possess large spikes that can extend out of their backs, from several rows, that are used in defense if they ever get attacked by a predator, not that it even has any.

Joints in their skeletons are much more flexible than other dragons. I've seen potbellies twist their arms and legs round 360 degrees, which was rather terrifying. Their bones are slightly elastic too, after stealing some rib bones from a potbelly corpse they reside on one of my shelves in my house.

Potbellies have large spikes that sit just below the skin on their backs. When threatened or in danger, these spikes will shoot out of the skin and stand upright. These spikes have proved great for fending off predators, and they have caused several tourist deaths.

Males and females are easily distinguishable. Potbellies have only ever been seen in pairs, with the males being larger and lighter in colour, and females being smaller and darker in colour. As well, the females have smoother scales than males. 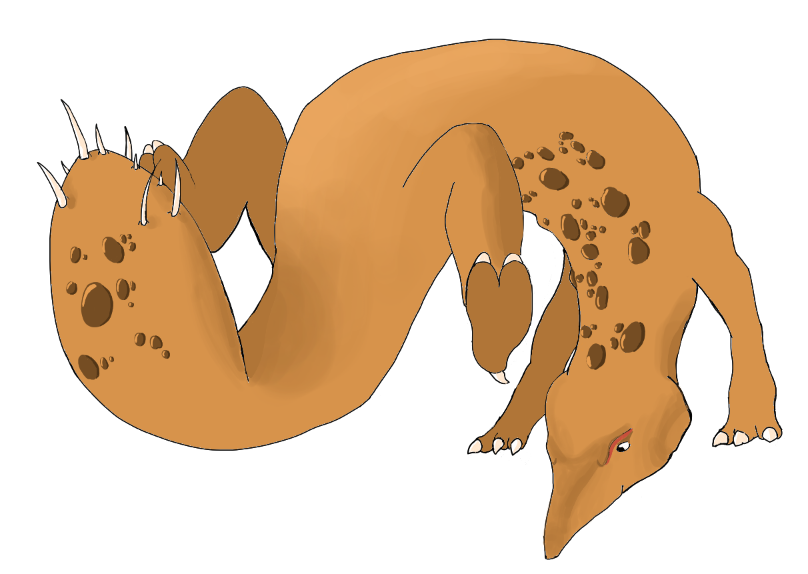 So I heard some rumbles in the cliff, and decided to take a look. Next thing I knew, a dragon shot out of the cliff and headbutted me. I went flying into the sea, where it carried on chasing me. I stood up, and grabbed my crossbow, and shot him in the tail. He turned around and slapped me in the leg with his spikes, spearing me. I still have a massive scar.
— Jerna, famed Travel Scholar, interviewing a potbelly survivor

Deep in the connected caves of potbelly burrows are nesting rooms. These rooms are the largest of the burrows, spanning at least 15 metres from corner to corner, the biggest ever measured was about 50 metres. All the females in the colony will lay their eggs in the nesting room, and a handful of females will be designated egg nannies, looking after the eggs until they hatch and age.

Potbelly eggs are very large, especially for their body size. Females lay 1-3 eggs every breeding season, which incubate for 4-5 weeks at most. Egg shells are hard, and can be used in shields for reinforcement. The eggs are a dark brown, with small ridges circling them. Orange dots are concentrated round the top of the shell.

Not picky eaters, potbellies are happy to eat anything as long as they think they can kill it. They are able to distinguish species of dragons and other creatures, and remember fights that they've had with particular ones, which helps them figure out if they would be able to kill and eat the dragon. They have many methods of catching creatures; they have incredibly speed, their running speeds reach 60 miles per hour, They can certainly burrow faster than one can walk, and they can even jump about 50 feet into the air to catch low flying dragons. It is safe to say there isn't much you can do if you were ever spotted by one.
Potbellies have hundreds of tiny receptors in their feet, that are able to detect tiny movements in the ground, caused by things walking and running along the ground above them or through the cliff face. When the dragons sense something, they dig their way out of the ground silently to have a look at what it is, and evaluate if they could kill it and eat it. If they can, then they'll hunt it down, but if they can't, they'll just retreat. Careful not to fall in any holes while you're near the rainbow cliffs, as you may just end up inside a potbelly nest.