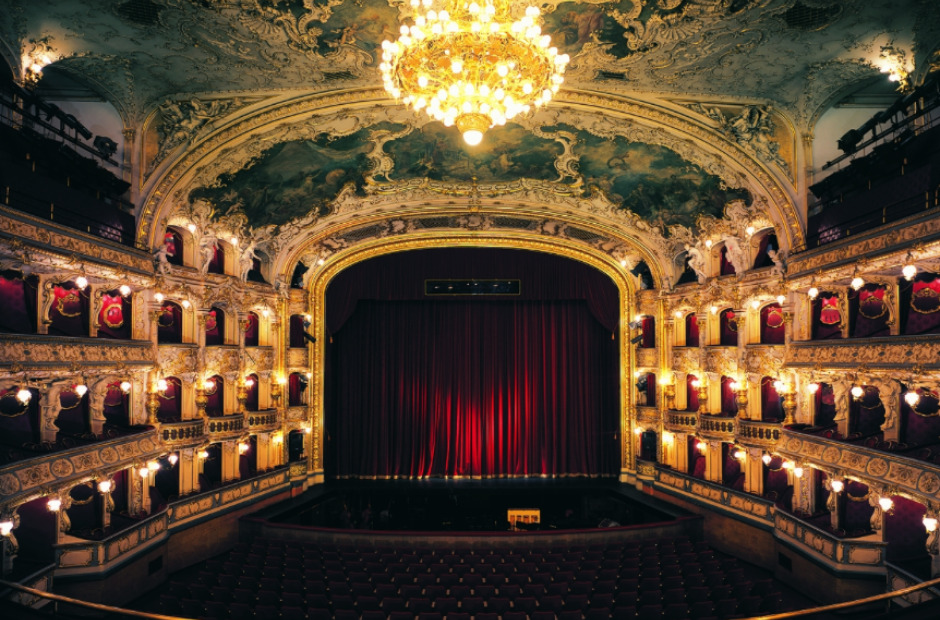 The Uncouth Theater is the building that mortals shun, both by its tragic history and now reinforced by the Kindred of Vecna. The Kindred have layered the building with Vampiric Disciplines, Devotions and Blood Sorcery, that build on the fears and expectations of the mortals familiar with the theater.

Protection of the Vitae

The Council of Elders are privy to everything that happens within it. When one or more of the Council of Elders are within their territory, they can feel when a person or animal crosses the barrier of the theater, with a relative feeling of their power. The Elders always have a rough idea of where everyone is within the theater, and only a strong supernatural power such as Disciplines can dampen their awareness — triggering a Clash of Wills.   Unless invited, the Blood Halls scare off most creatures. Animals and wild beasts won’t enter, and will fight to escape if forced inside. Humans and supernatural creatures must succeed at a Clash of Wills to enter — or to stay in the area. Unless they buy off the Aura Condition, the feeling of overwhelming dread hangs on all their actions. Layers of fear roll off the theater, forcing most to actively avoid it, not approach it or to retreat from its closeness. Even if someone resists the fear and enters the theater, the illusion of obfuscate covers any recent signs of activity and reinforces the theater's abandoned and discarded nature.   One or more Skill Tests or Clash of Wills is required to act on, resist or penetrate the Kindred protection.

Kindred of the City

Sitting laggardly on a sad little corner in the Northside of Midtown Ward, the Theater of the Uncouth rests and, some say, patiently waits. The building clings to the shape of its once-grand architecture; however, the face of the theater has fallen to the weathering of time and damage of neglect, making it a mere ghost of its former self. The locals skirt this building whether deliberately or on some primal instinct, not wishing to pass within its looming shadow. Most people keep several buildings between the theater and themselves as soon as the sun goes down, not wanting to risk even so much as a glance upon it.

Once known as the Twilight Theater, the Uncouth Theater was a mighty and quite beautiful place, full of spotlights and exotic scenery. Many legendary plays once graced this stage, like the much-beloved Destruction of the Realm, a tale of war-torn kingdoms. The late and great actor Bowie Sanchez made his debut performance as the lead in the ever-famous Lord of the Shades. The Twilight Theater was once among Midtown's most extraordinary crowning jewels, bringing in the crowds of wealthy nobles while filling the coffers with gold coins.   Then came the scandals, with tales ranging from the most unwholesome criminal activities to basements used in necromantic rituals. Several acts of murder even occurred near the theater. Some even remember being in the seats on the night the curtains opened to present a corpse grotesquely posed to the start of the theater's most famous play. People rightly feared to visit the theater or even so much as gaze at its marquee after that disaster.   The old owners of the place, Oswald Williams Jr. and Jackson Fowman, did what they could to maintain the business they owned and loved. However, after an incident involving patrons, staff, and a suspicious alchemical fire, the owners received a "friendly suggestion" from the authorities to shut down the place altogether. It was a sad day for the Midtown Ward, and the name Uncouth Theater quickly took hold, while the term Uncouth Widow was whispered for the poor souls that ran afoul of bad luck within or near the decrepit theater.

The front of the building shows the worn and destroyed ticket counters like the broken teeth of a leering skull. The twin sets of solid double doors, while well-worn, remain firmly shut and chained against intrusion. Inside, the lobby acts as a gathering area with three chained double doors leading into the main floor area. Stairs, riddled with holes and damage, climb left and right up to the wings of the balcony level. The main floor's disrepair drives home the sheer age and neglect layered over this once-grand theater. Ruined seats and smashed benches lie scattered like a graveyard audience before the main stage bathed in its palpable sense of despair. Cobwebs and dust layer the entire floor like a barrier to the forgotten past. In contrast, the main stage is the only portion of the building that seems to still be intact, with the polished wooden beams, obviously treated with durable alchemical protection.


Can ye' not feel that? How the building seems to crave fer ye' like i's just waiting for a chance to gobble ye' all up. Makes me feel real small that does, like a minnow to a whale. 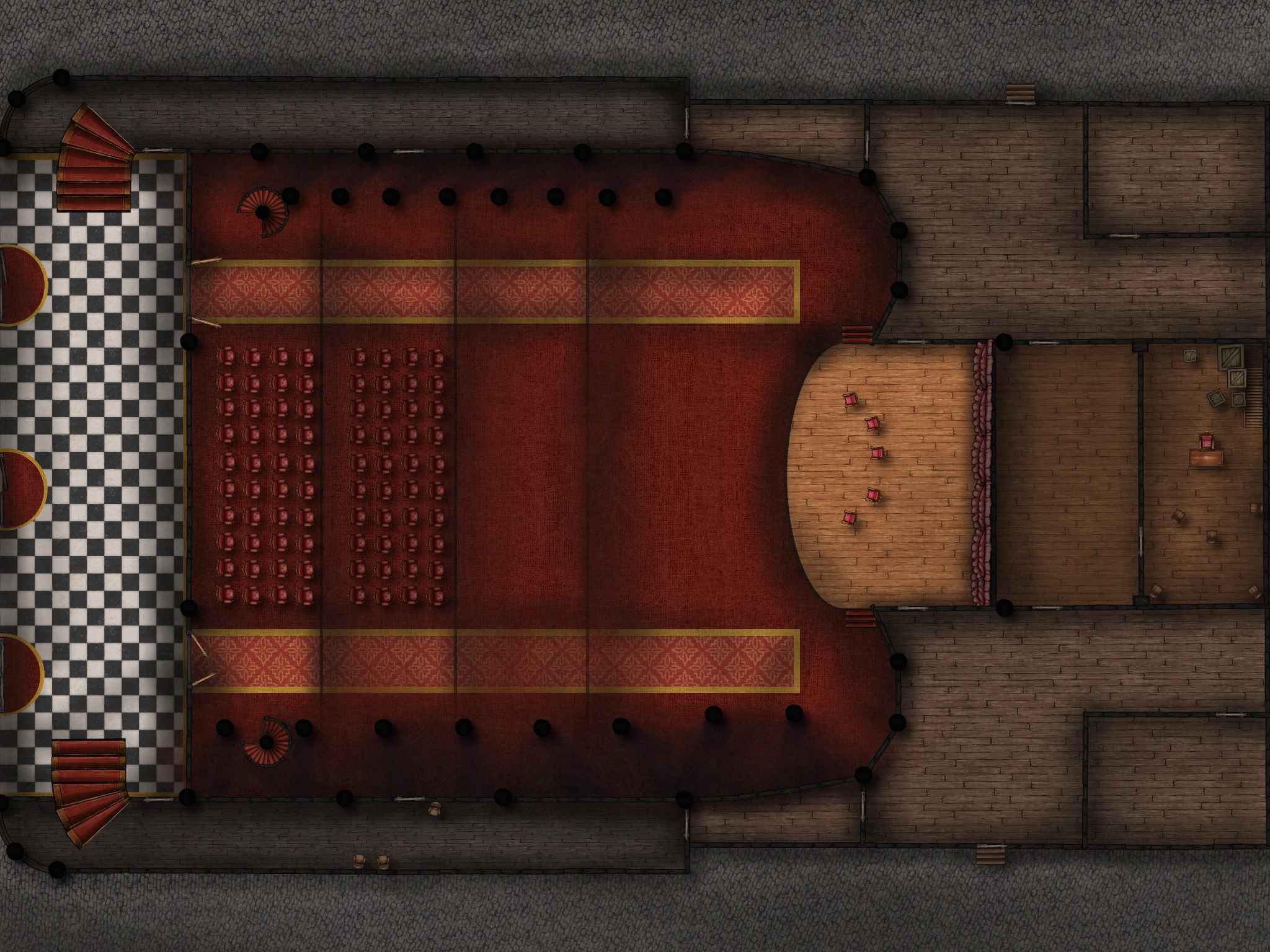 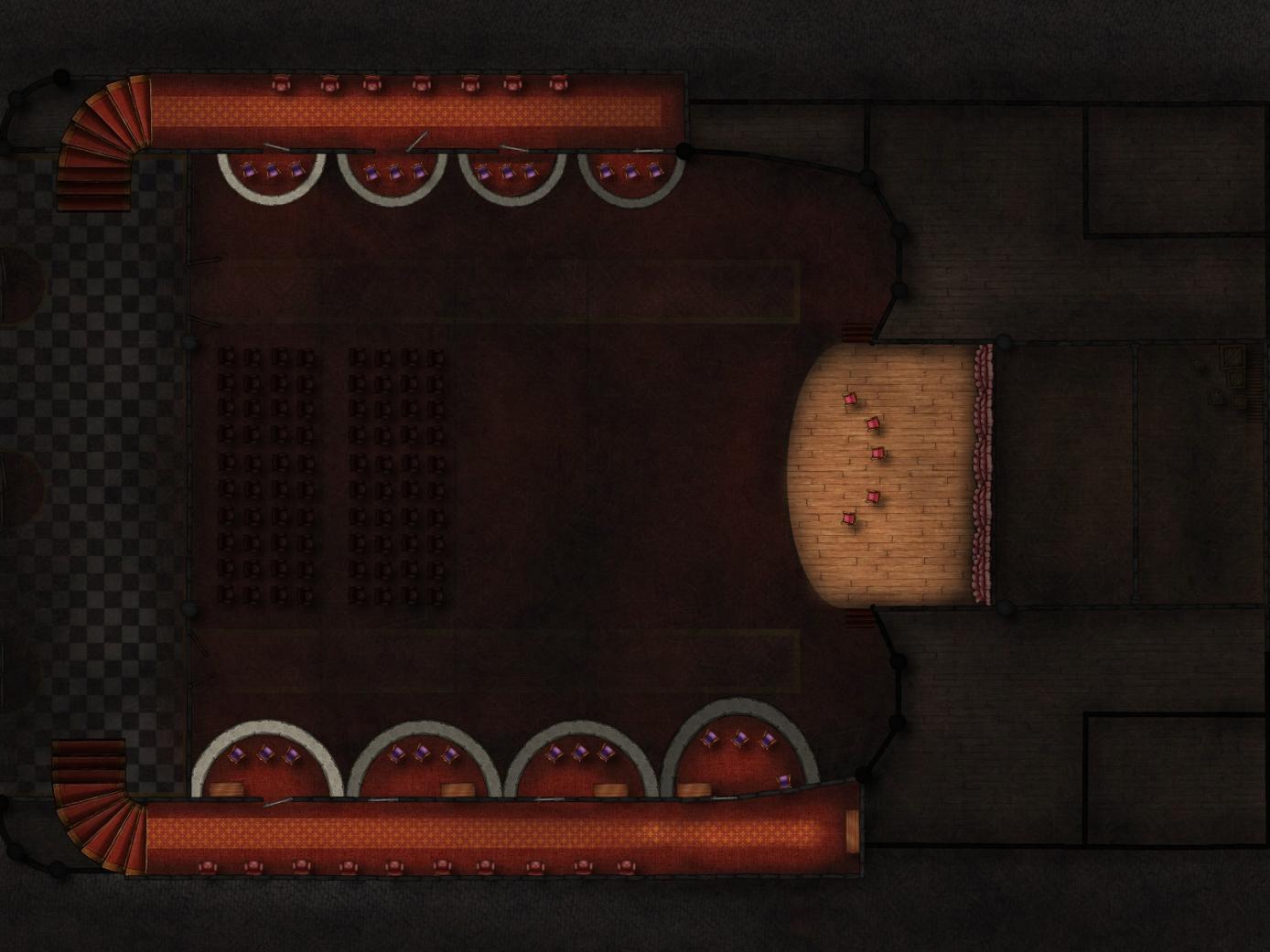 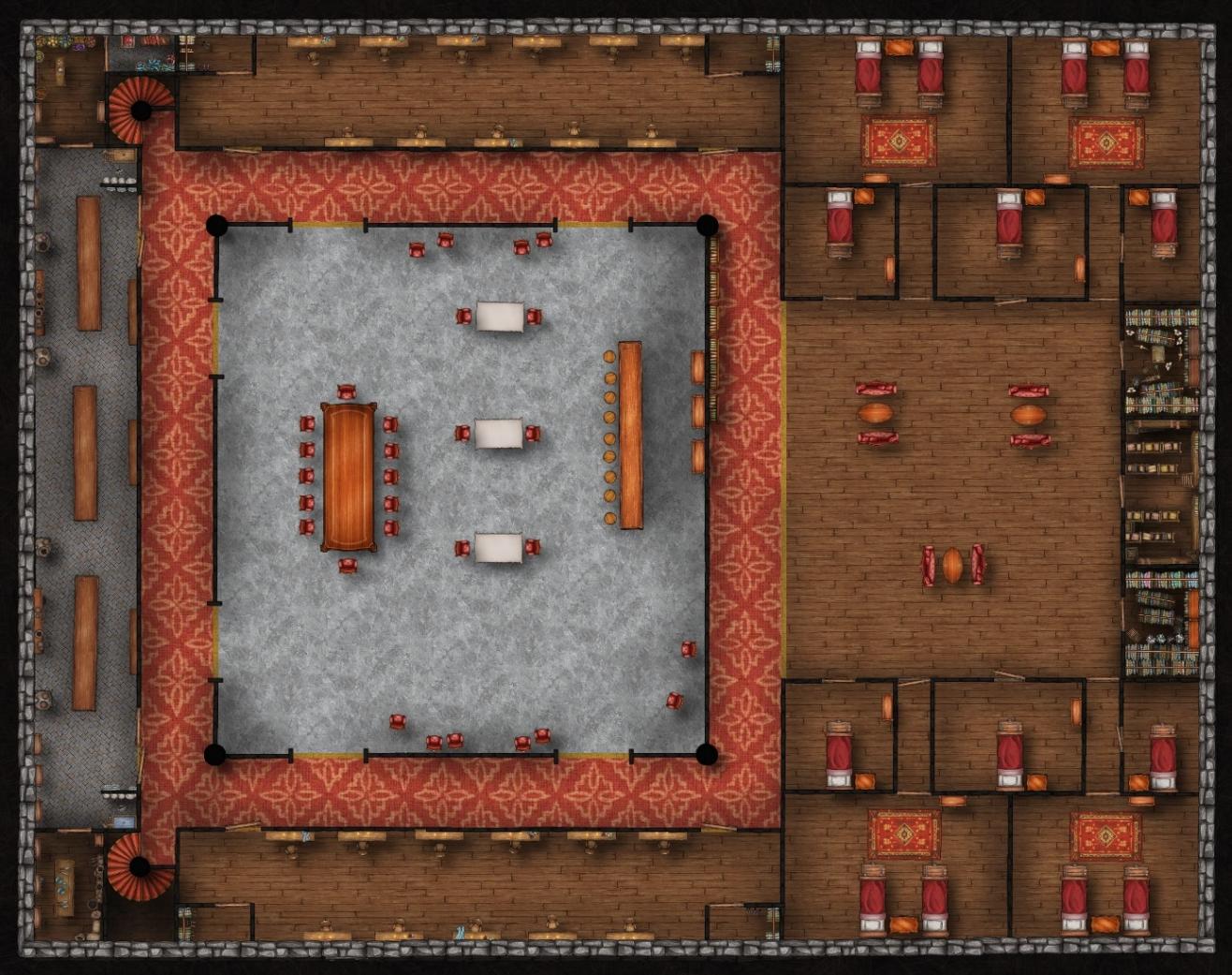 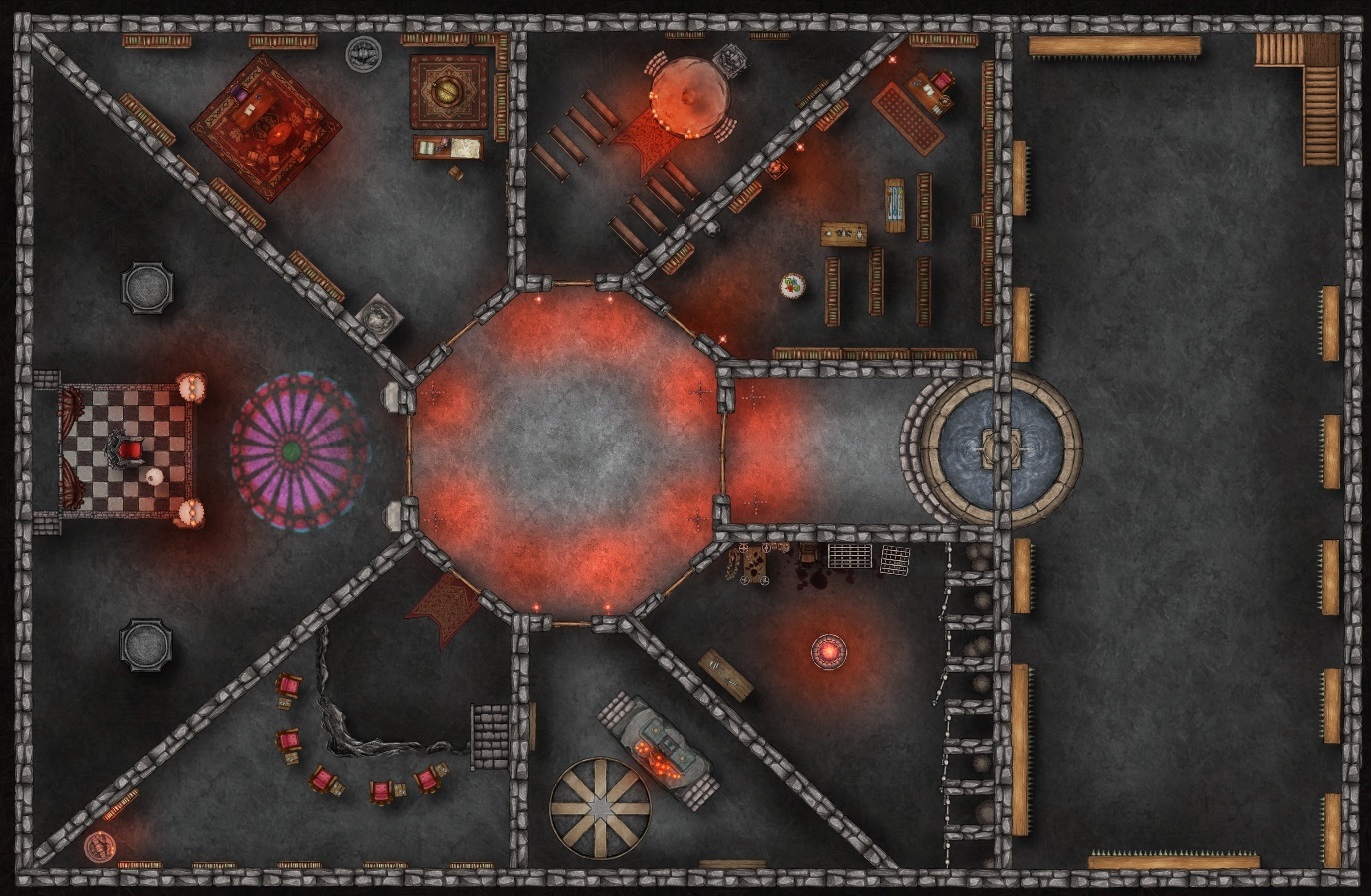