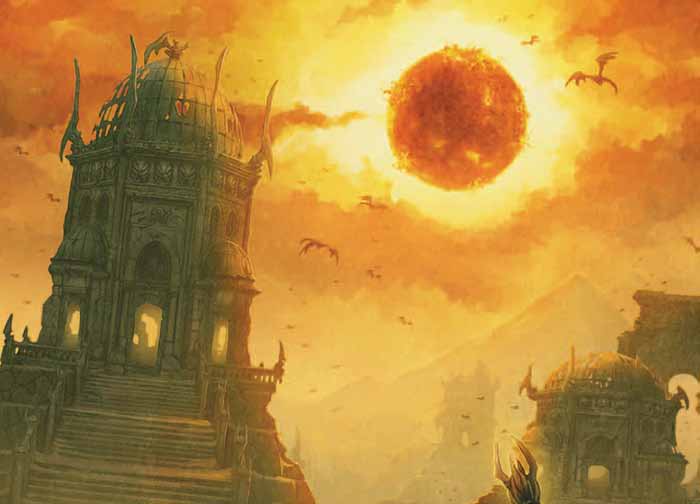 The City of Night (formerly the City of Fear) Eldaarich is made up of seven walled-off sections, with the gates between guarded at times by either Daskinor's Templars, a noble merchant's mercenaries, or in exactly one case, seemingly no one at all.   The sections of the city are...   The Markets - The common area of Eldaarich where most trade happens, just inside the city gates. There are smaller markets in most every section of the city, but this is the primary marketplace. Despite the chance of getting robbed, the Markets is typically the safest place in all of Eldaarich to be.   The Hold - The slums of Eldaarich, where any non-nobles or outsiders live. Death and disappearances, as well as plague and hunger, are common here, and living conditions are poor. The city's aura of paranoia seems especially noticeable here.   The Grey Watch - On the outside edge of the city facing the Sea of Silt, this nobles' quarter is lorded over by a trade alliance dealing largely in metals and obsidian. They have a substantial mercenary force of glaives and largely keep to themselves.   The Sun Quarter - In one of the few portions of the city to rarely fall into the shadow of Daskinor's temple, this nobles' quarter is a home to Daskinor's most outwardly loyal petitioners who deal in extravagant goods and often claim to have been empowered by Daskinor as his "chosen few."   The Moon Quarter - Opposite the Sun Quarter, the Moon Quarter is a noble district often in the temple's shadow, and was once home to the city's psionics academy before Daskinor ordered it burned to the ground. The Moon Quarter's nobles are a curious lot, leaving the gates to their district unguarded, yet anyone passing through them will feel closely watched. They have also been known to extend aid to the Hold in times of great distress, but whenever they do, disappearances in the Hold experience a spike soon after.   The Templar Quarter - The barracks, armory and training grounds for Daskinor's templars, which used to reside in the temple itself until Daskinor no longer trusted his templars not to rise up against him. They watch the city from a high post and these days must spend almost as much effort guarding their own stockpiles as they do the temple.   The Temple of Daskinor - Looming high in the center of the city, the Temple is less opulent than its southern counterparts, forgoing style in favor of security. The high walls guard a series of tall, white spires sitting atop a broad pyramid base. Rarely is anyone but the captain of the templars and their personal security detail seen going into or coming out of the temple itself. Around the city, worship centers for the few scattered faithful have been set up in each district (especially in the Sun Quarter) to commune with their paranoid god-king as they will.     Law and Legality
Daskinor's paranoia has led to any number of things being on the list of unlawful things in the city of Eldaarich over the years, and enforcement against these vague threats has tapered somewhat over time as the templars suss out for themselves which are and are not legitimate threats to the sorcerer-king's power.   A few things remain consistently illegal, however: Many of these laws are enforced disproportionately heavily against the denizens of the Hold versus those in the noble districts, who can afford to bribe certain templars or otherwise find more creative ways to mask their illegal activity.   Sample city map using Vor Rukoth 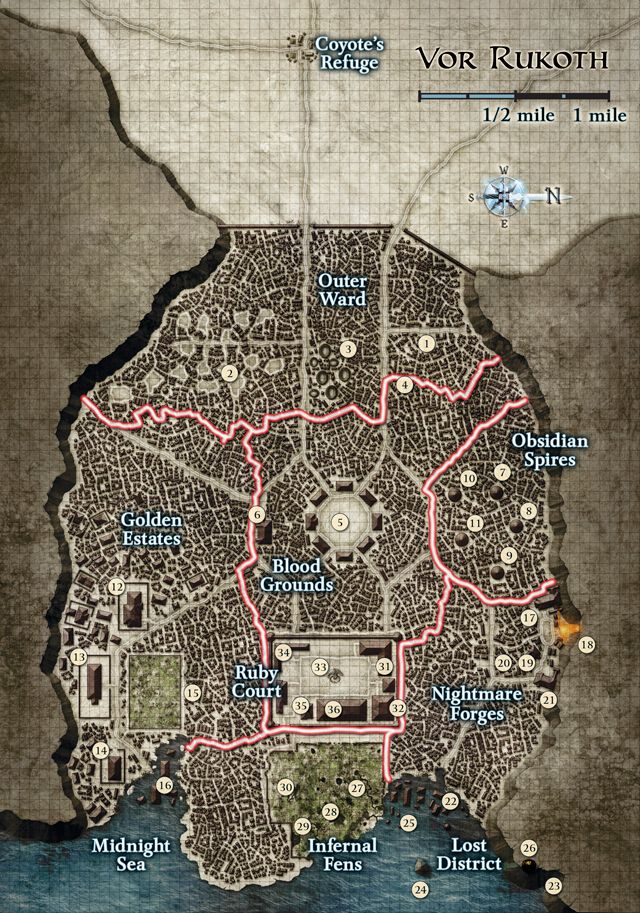