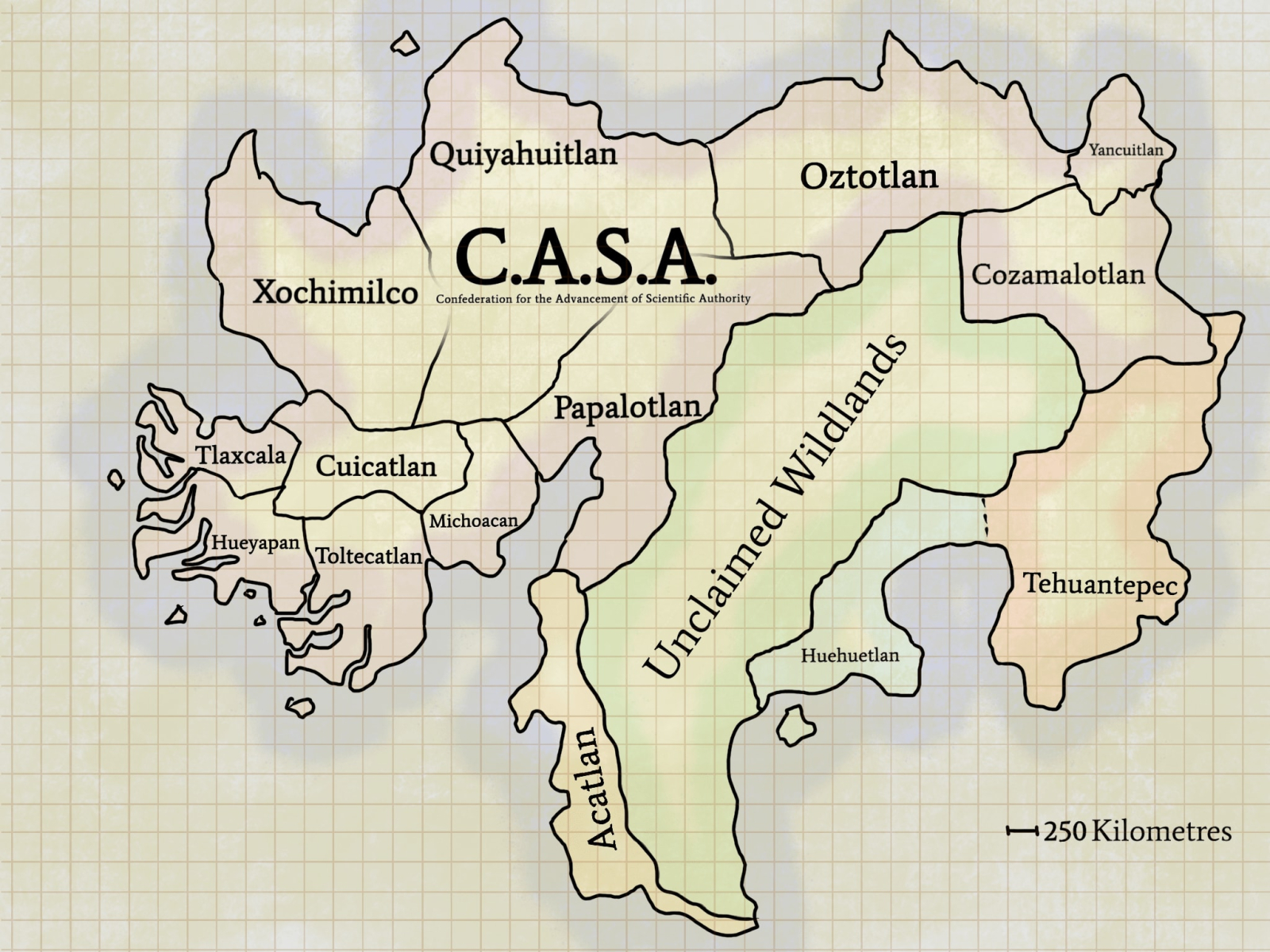 opticalcite
Craton II is a large, continent-like landmass situated on the inner surface of a modified Dyson shell. Over half of its surface is covered in dense rainforest, with the majority of the other half being patchier or partially-cleared temperate forest. It is approximately 10,000 kilometers across on the X axis and 7,500 kilometers on the Y axis. The vast majority of Craton II is populated by humans and human-adjacent species. The following are considered human-adjacent: A. Were human in the past, but underwent a drastic transformation into something new that still contains the DNA of and ability to interbreed freely with humans, B. Are so rare that they have little to no independent culture and simply blend with human society, or C. Are mixed-race with human and choose to live in human society. Much of the culture is based off records of the Mexica (Aztec) people, especially religion. It’s a little alternate history and a lot fanstasy. The Aztec creation myth may as well be cannon. Initially there were very few humans on Craton II, and they all pretty much had the same religion. As they spread and their population grew, they began to split into factions, as religions are wont to do. Primarily, they split into the Followers of Quetzalcoatl and the Followers of Tezcatlipoca. Both gods became rather prideful of their cults, and began granting them blessings more and more often. This in turn made them more powerful and began a short but intense religious war ending in a massive schism, splitting the religion for the forseeable future. The schism was cemented by Quetzalcoatl. As the blessings granted became more and more potent, he gave his followers something that could not be revoked lightly: he mutated their humanity and turned them into something else, the serpentine Coatzitzintin. They were overjoyed. Tezcatlipoca, seeing this, decided he too must change his followers or they might desert him, making them the jaguar people Tabaxi. This far into the feud, they were satisfied, and stopped their petty warfare to have peace. Mostly. The remaining less devoted humans, however, were slightly horrified by this development and turned away from the religion that formerly saturated so much of their lives. They began focusing on one thing and one thing alone: technological progress.   Primary inspirations include: the Eberron campaign setting, Central and South America, South Asian rain/cloud forests, old/19th century science fiction (Mary Shelley, Jules Verne, H. G. Wells), Woman on the Edge of Time (1976), Studio Ghibli films (especially Nausicaa of the Valley of the Wind, Howl’s Moving Castle, and Princess Mononoke), the Age of Enlightenment, Industrial Revolution and subsequent period

An introduction to the world of Craton II. But in your travels and exploration, you just may find something more . . .