The Lord of Bones

"You won't catch me crossing the river after dark when the moon takes her leave, not since that night. I don't care how many generations the sigils have held, those carvings on the Necropolis walls don't keep you from hearing what's going on inside, and I still wake up with them in my head some nights. First come the pipes, high and eerie and so quiet at first that you're not even sure you're hearing them. About the time the hairs on the back of your neck are standing up straight as can be, the drums join in, beating out a march. After a time it all stops for a few minutes and the next thing you hear is the most mournful and haunting violin. That's Old Rot himself, playing to raise the dead so they'll be easier for his soldiers to grab. They say that if it's a clear night you can glimpse him standing on top of Griffon Hill playing out his tune, but you ain't going to catch me looking.   Soon as the fiddle dies down, that's when the sounds that give me nightmares start. The drums start up again, gentle at first and then building and building. But it's not a march this time, it's something more sinister, anxious. Almost predatory, if that makes any sense. Then some of them start switching up the tempo, so you've got a clash of different beats going on all at the same time, all chaotic and disorienting. That's when the screams start. The horrible wails of the dead that get so loud you can barely hear the drums. There's a little bit of respite when the pipes come back up. They don't drown the shrieks of the doomed completely, but at least they mute them a bit. Then the drums start playing their march again and the dead's cries of pain are just a counterpoint to the same march as before. The sounds get quieter and quieter as the procession goes back into The Pit and underground into the Carrion Moors .   As soon as the music and the screams fade out completely, you hear the most complete silence imaginable. It's as if everything in the city, from the people to the rats to the wind itself, has been holding its breath so as not to give the Carrion King a reason to test the barrier. Then after a beat it's all over and the city gets back to business again. What else can you do?"
--Old Griff, retired thief

The Society of Bone paints both their own faces and those of their victims with stylized skull designs.

The Society of Bone is not so much a religion as a death cult. They believe that if they kill in the name of the Lord of Bones, he will make them barons of the Carrion Moors when they die and allow them to remain in his realm for eternity without ever having to face the judgement of Argalak, the Weigher of Souls. Until they receive their eternal rewards, members of the society have profited in the worldly realm by acting as an assassin's guild.

The Lord of Bones leads his procession into the Necropolis to collect corpses during each new moon.

The Lord of Bones' only known aim is to collect the corpses of the dead whose souls have not yet been transported elsewhere and drag them back to his realm. Doing so allows him to take control of the soul for 99 years. The Carrion King's dominion over the souls preserves the associated corpses, which are used as construction materials in the Carrion Moors. Many believe that Old Rot's supernatural powers are fueled by the souls as well.

The Lord of Bones is a tall, thin man with dark brown skin. His face is painted in a skull-like pattern of white and black grease paint and his eyes are the color of blood. He has a deep, clear voice that is somehow sinister and melodious at the same time and he speaks with a genteel formality reminiscent of some faraway time.

The Lord of bones wears a black flat-topped brimmed hat and a traditional black funeral coat with no shirt underneath. A necklace of bones hangs around his neck. His staff of office is an intricately-carved human femur with several shrunken heads hanging from the top end. His well-worn violin is carried by a valet in a bag made of skin.

The Lord of Bones arrives in our world aboard a funeral coach pulled by six skeletal horses. The coach made of skin, bones, and other human remains. Close examination reveals that the coach is covered with a thin sheen of spectral material in which can be seen moving patterns that occasionally form into the agonized faces of the dead. According to adventurers who claim to have visited the Carrion Moors and managed to return to the land of the living, nearly everything in the Summerland is constructed of equally gruesome remains, and if you listen closely you can hear the agonized moans and wails of the dead whose souls are still tied to their earthly remains. 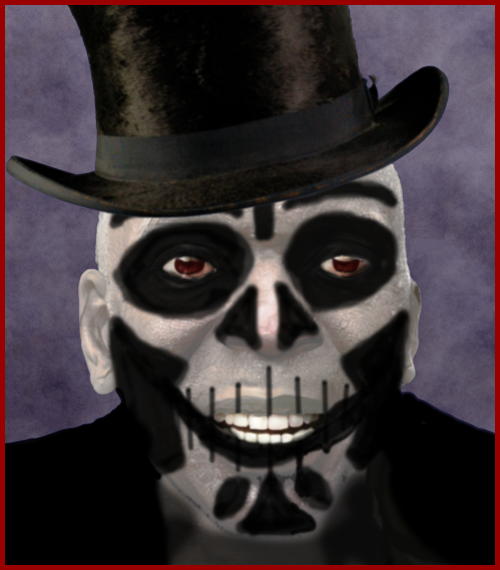