Rickcan 'Robbie' Fowler is a Dwarven vigilante, ex-mercenary, and adventurer located in Discordia. Ever mysterious, Fowler has been causing all sorts of chaos with other unknown individuals. Formerly of the notorious criminal organization, the Featherfall Hatchery, Fowler has been seen in a more heroic light. Recently, he has been within the walls of Sol City where there have been reports of noble vigilantism in the area.

Very rare for most dwarves, Fowler doesn't have a beard. As a matter of fact, he has a completely clean-shaven face. On rare occasions, Fowler could usually be seen with a stubble. The purpose as to why is unknown.

Fowler has showcased rare moments of strength. Dwarves are naturally able to be strong, able-bodied warriors, but Fowler's strength has garnered rumours throughout the land of Discordia and beyond.

Fowler is equipped with a belt of magical origin with a spotless black diamond in the center. It's one of the reasons he goes by "The Black Feather". It is also noted that Fowler always walks around with three vials of a purple liquid.   Aside from that, Fowler's weapons of a choice are daggers and a silver-and-white hilted rapier and main gauche.

Rickcan James 'Robbie' Fowler hails from Gloomvale, a Dwarven town near the Crestvale Hills. A very close-knit community despite the name, Gloomvale revelled in holidays and events regarding their Dwarven heritage. Born into a blue-collar family, Fowler prides himself on being a people-person with a small distrust of authority figures. Smart, witty, and friendly, he usually travels by himself to the main regions of Discordia, always looking out for the downtrodden and the poor.   In his younger years, Fowler showcased skills of stealth, sleight of hand, and gathering information through acts of youthful defiance. His acts made him somewhat known as a vigilante in Discordia. That, plus his problems towards authority figures, got him into the Featherfall Hatchery, one of the biggest crime syndicates in Chobos. Complications within the syndicate, however, led to an altercation with some members leaving. Whether that was Fowler's doing or not remains a mystery. Fowler has been seen with some individuals with matching capes, spreading their vigilantism throughout the world.

Brought in by the Featherfall Hatchery, Fowler was brought in by one of the higher-ups to oversee a large ring of lower-end members. The purpose of the group is unknown to many people around Discordia. However, people have seen Fowler, along with a couple of his cohorts, leaving various homes of powerful families across Discordia in the dead of night.

After this small man saved me, I noticed a sign similar to that gang of thieves, the Hatchery. He then told me that things are different and that he wanted to forget what they made him believe. And then... he left me in the dark with a gold piece. I couldn't believe it...
— Eyewitness Report, Sol City Core

Fowler has been known to be one of the most moral individuals in the Featherfall Hatchery before its seeming implosion. Unwilling to steal or take the life of an innocent, he uses unconventional methods to succeed on his missions.

Through eye-witness accounts, they believe Fowler maintains a mindset that sometimes, people can be driven to set things in motion for the right reasons. These things could be as kind-hearted as helping people from assaults or as... murky as 'eliminating' low-standing members from notorious crime families.

Fowler is a notorious drunk, able to identify a person's personality through a couple of minutes at a bar. Fowler's most famous vice is his slight kleptomaniac tendencies when he's drunk. It is said that there's an event in which Fowler reportedly stole a belt of magical origin from a half-orc enforcer.

Extremely wise in social situations, Fowler is charismatic and suave. Able to blend in Sol City, it is documented that he is more than okay with dealing in large cities. It is said that witnesses sometimes see Fowler in a more serious light, willing to turn into another state of mind.

Anemone and Robbie met during an altercation involving an unknown criminal hiding in the Challon countryside. With their own intentions regarding the fate of the criminal, not much is known about the outcome. However, despite the difference in personalities and outlook on life, Anemone and Robbie saw some common ground. With a (not-so) secret guilty pleasure for funny individuals, Anemone took to Robbie's... unique form of self-deprecating wit. Robbie took to Anemone's... unique intensity and his (not-so) secret guilty pleasure for confident women.   Eventually, they started a relationship that went on for five years. The relationship was kept a secret due to Robbie's history as a known criminal, but they made it work. During that time, Anemone taught Robbie fencing and the application of magic in combat. Robbie taught Anemone the joys of some good alcohol and releasing one's anger. Unfortunately, the bond wasn't built to last. After an event that caused Anemone and Robbie to have a vocal and violent altercation, the chemistry was gone. The odd yet noticeable love was washed away and Anemone and Robbie parted ways. Whether or not there's still a spark left, none could say.

Alcohol, combat, having people you can rely on. 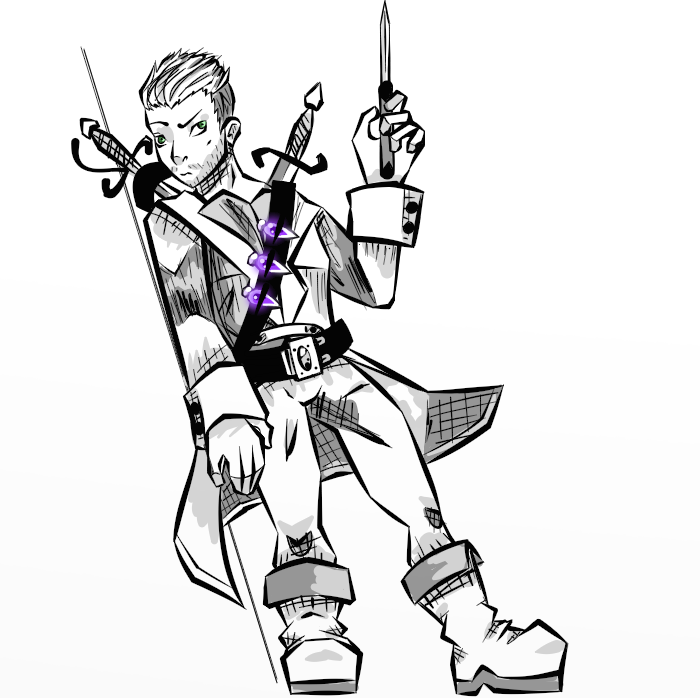