"Someone that doesn't enjoy cheesecake doesn't live life to the fullest."

Created by Daniel Yeboah and a lot of hot chocolate.

Aubrissa Magrora is a travelling bard, adventurer, and notable musician. Born as a half-elf, Aubrissa is considered one of the rare talents in Discordia's history of bards and musicians. This is especially the case considering that Aubrissa is a solo artist, singing her way to fantastic performances in Showcases all around Discordia.   Currently travelling and seen with three other individuals, Aubrissa is currently in an adventuring party that has garnered some attention in Sol City. While adventuring, she can also be seen with D.T. Bailey and the Spectacular Carnival of Wonders, Oddities, and Wonderful Oddities. Aubrissa can be found singing while she is conversing with fans young and old.

Aubrissa is a nimble and graceful half-elf with a slender frame. She has peak physical conditioning and deceptive physical strength.

Aubrissa has olive skin, a rarity amongst half-elves in Chobos. She has shoulder-length brown hair that recently grew out during her travels with D.T. Bailey's carnival.

Considered to be one of the most exotic individuals in Discordia, Aubrissa's purple eyes are her defining physical trait.

Aubrissa is also a bit of a fashion icon. She has two braided pigtails on either side of her face. That distinction prompted many girls and boys to style their hair just like her.

Through appearances and interviews with Aubrissa during Showcases, it is known that she has displayed feats of invisibility and songs that have eerily curative properties.

I don't know why, but that Magrora girl? You know the one in that popular singing competition? She looks a lot like that Acra Phobia chick. The one that wrestles? Shit, maybe they're related!
— Carnival-goer, D.T. Bailey's, Sol City

Aubrissa sports purple & gold bandages on her hands and ankles at ALL times. Very few people know why. She is also equipped with a satchel which - interestingly enough - carries a small unique hammer. There have been reports that it's similar to the hammer used by Acra Phobia, a famous pro wrestler in Discordia.

Like several people in Discordia, Aubrissa is a wielder of a Luitarra, the first invention under the SRC-Tech name.

Born and raised in the Crown Jewel of Sugarhill in the country of Symphonia, Aubrissa Magrora (or Rissa, to old and new friends) lived a happy life of music and adventure as a travelling bard. Born as the only daughter in a family of five, she is the daughter of acclaimed musicians Ambrosia Fen and Lyle Magrora. At an early age, Aubrissa was taught music and magic by her father and mother, respectively. To her, it was fun.   Deciding to take her experiences on the road, she often sang with her parents as her older brothers were away on business. Growing up, Aubrissa has a stunning voice that still brings fans to this day. However, her life wasn't always grand. Having her share of bullies and hecklers growing up, she grew to be friendly but reserved. A sweet yet innocent soul, she started to travel alone to find herself and her confidence as a bard, an adventurer, and as a person.   All of that changed when the circus came to town with a new feature: the Squared Arena Federation. It was there that Aubrissa, after years of seasoned adventures, learned about the new creation of professional wrestling with a smile on her face. Curious, she took the opportunity to offer her services as a musical talent, bolstering the local carnies' morale.   Determined to open up to the world more, she often frequents the travelling circus, offering her support through tunes, smiles, and some cheesecake with friends and strangers alike. It is said that she now travels with another group of star-crossed allies. For what purpose? Aubrissa cannot say. Even a warm soul can have cold secrets.

Ever the friendly optimist, Aubrissa loves to meet people - especially children - and make friends with them.

Aubrissa's most notable vice is that she is a cheesecake addict. Prone to tell anyone about her latest cheesecake recipes, she's more than willing to share. Whether people like it or not.

Aubrissa occasionally snorts while she laughs during some of her performances.   It's a quirk that - unsurprisingly - earns her a fair amount of fans.

Aubrissa is the daughter of Ambrosia Fen and Lyle Magrora, two amazing bards and musicians that have previously won the Discordian Showcase Series in its first year.   She is also the sister of Raymond 'Kai' Magrora, a renowned treasure-hunter across Chobos.

Aubrissa's charismatic and friendly. Approachable, she exhibits a positive personality in most occasions. A bit of a flirt, she's always one to compliment an attractive individual in sweet ways. In rare occasions, she'd be dour and almost laser-focused on her mission. 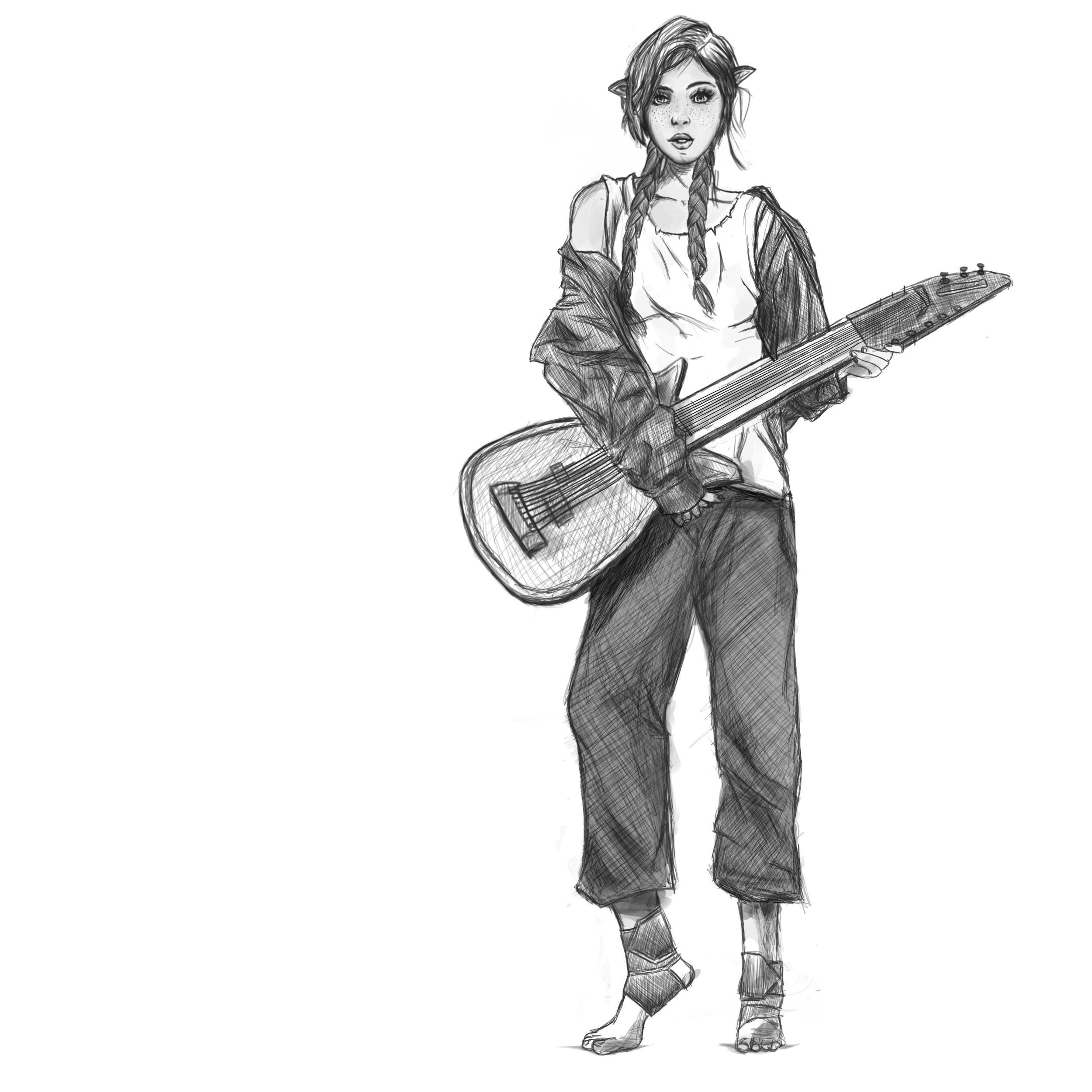 Decided to bring some D&D spells and abilities here and convert them in a way that makes sense, worldbuilding wise. Hope y'all enjoy.