The Empire, also known as Mitra Empire is the most powerful nation of the Known Lands. It is an enormous religious, economic and military superpower that has so far no rival in the battlefield. The Empire has been ruled since its foundation by the same person, Mitra, the immortal empress.   It started as a small city state that grew to become the biggest city in the world, conquering all the nations around or submitting them as vassals. It is no secret that the Imperial City has enormously benefited from the Red Plague outbreak that destroyed most of humanity. The Empress arrived to these lands with a cure for the disease, and many had to chose between surrender to her or be terminated.   Little by little the empire spread its grip to most of the mainland. Most settlements that had managed to survive the plague, were however not able to expand outside their defensive locations or outside their walls. During these dark centuries, they were so isolated that for many, the arrival of Mitra's army was the first contact with other humans.   The Empire keeps spreading nowadays, and its becoming clearer and clearer for most free nations in the Known Lands that it will not stop until all the land belongs to Mitra. It is also becoming obvious that their previous tolerance to other cults is coming to an end, and religious prosecution start to take place withing its borders.   There are different regions within the empire, that have very clear geographical borders and very distinct cultures and religions. Even though Mitra keeps trying to wipe out other cultures, languages and religions to establish its own. Some areas are more loyal, others have rebels that start to organise themselves against the fear of The Empress.

The structure of Power varies on the territories, depending if they are fully annexed areas or client stares. In many cases the power has stayed like it was before the Empire, but their leader will deal directly with the Empress. For the rest, the same social structure develops in the empire. The Empress has all the power, but there is rich families that can attain a status similar to nobility. Each family that wants to enjoy privileges, so they pay tribute to Mitra each seven years. The higher the tribute, the highest the position one can hold.   The gilded: The upper class of the empire rents its privileges. They have access to the best jobs in the military, economic and religious sectors. They can commit crimes against lower classes without mayor repercussion. The jobs are all organised in a pyramid structure falling under the rule of a different ministerial organisation. The head of all organisations is the Empress. The military is ruled by the Hands of Mitra , the religion is ruled by the Eyes of Mitra, the economy is ruled by the The Vault Locks from their Headquarters in Fenvault. Other many minor organizations exist. Some of them independent, some depending of any of the previous.   Freemen: Freemen are a big part of the population. They may be rich, but not enough to buy the gilded status. They may be poor, like beggars. But they are all under the scrutiny of the Eyes and the Ears of Mitra . The life of most average freeman on the empire consist in surviving and not doing something that may call the attention of those organisations. Or cause the jealousy of a neighbour. In theory, a poor freeman from a poor family could become a rich person and buy the gilding, but in reality very few manage to improve their situation in their lifetime.   Slaves: A slave cannot be freed in the empire. Once a slave you will always be a slave. Slaves are heavily marked with tattoos. Most of slaves come from war prisoners, and a few come from the waves of newborns that have come from the underground in recent years. A person in debt can become a slave too. Slaves are treated horribly in the imperial society. Not just they lack freedom, but they tend to have a low lifespan due to this . The impossibility of getting freemanship once a slave, the huge numbers of underground refugees and the endless revolts and wars, makes them a easy to acquire commodity.

It is very difficult to count the population that lives in such a large diverse territory, and so far nobody has tried to do a census. However er know that many imperial cities are over the 100.000 inhabitants, and the capital is over 500.000   Life expectancy is in general high for the gilded that can afford it or for the richest of freemen. The rich, could easily pass the 80 years old, and have an active life. It happens that some families spend most of their income in obtaining the gilding, having less access to medication and good sources of food and water. Their life expectancy is however still high, near the 60 years. Some of the freemen also reach this age.   Poorer freemen can expect to live until their late 40's.   In the other hand slaves life expectancy tend to be 25-35 years, depending if they are domestic slaves or work in the mines.   As usual throughout the known lands, children barely survive their first year of life. The average family does not have many children though, at most 3-4, being slaves very cheap many people use them as labour even in small farms.   The most common cause of death are intestinal problems, but also famine, dehydration or exhaustion (specially amongst slaves) The south has also outbreaks of Swamp Fever regularly, and can be quite devastating.   War or violent death are not uncommon causes of death. 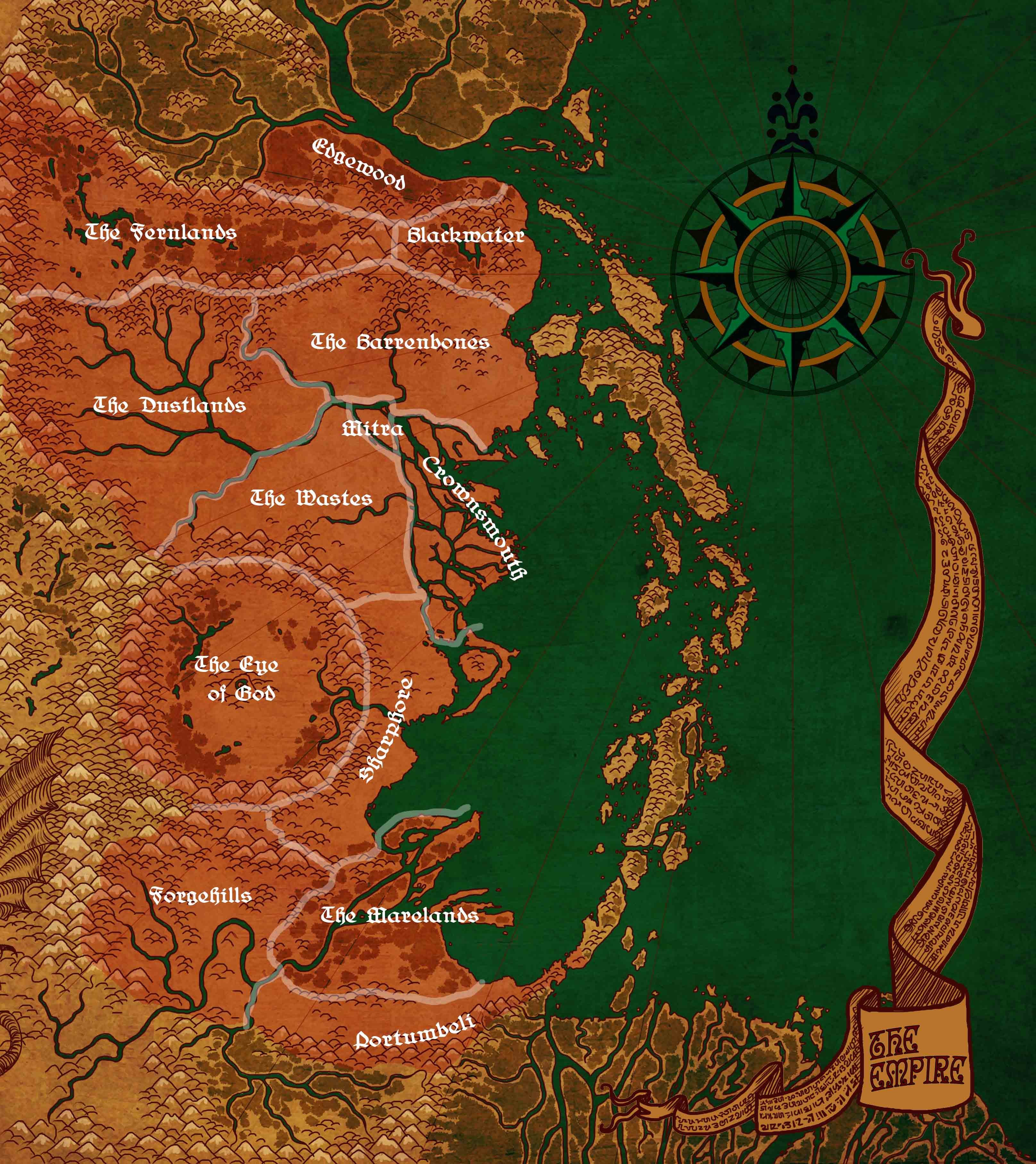 The land army of Mitra is the biggest in the known world. The nation has an imperial army, the Hands of Mitra , that counts with over one million soldiers all over the Empire. There is also a number of Mercenary groups that have fight for the Empress in the past, in exchange of coin. The vassal states also count with an army, as many militarised branches of the religious groups. There is also slave armies that belong to certain gilded families

Mitra does not have official relationships with other countries. They allow antalean ships to trade in their harbours, and always had a good trading relationship with them based on leaving each one to their own affairs. Things are changing rapidly though. The empire is at constant war with the Remains of the Arnian League in the south, To the north its more and more suffocating the economy of The Autumn Tribes and getting in close contact with many other northern factions that are not pleased with Mitra's expansion.
Type
Geopolitical, Empire
Capital
Imperial City
Head of State
The Empress
Government System
Theocracy
Power Structure
Unitary state
Economic System
Mixed economy
Currency
Imperial Mask (gold, silver and copper)
Legislative Body
The Empress Mitra
Judicial Body
The Empress Mitra, but she rarely deals with most common issues. The Eyes of Mitra is a group of priests that make sure the law can reach every corner of the empire. It is a militarised religious order that has a clear ranking system that goes all the way up to the empress. they work closely with the Ears of Mitra. A secretive state organisation with an extensive network of informants.
Official State Religion
Imperial Religion
Official Languages
Controlled Territories
Neighboring Nations