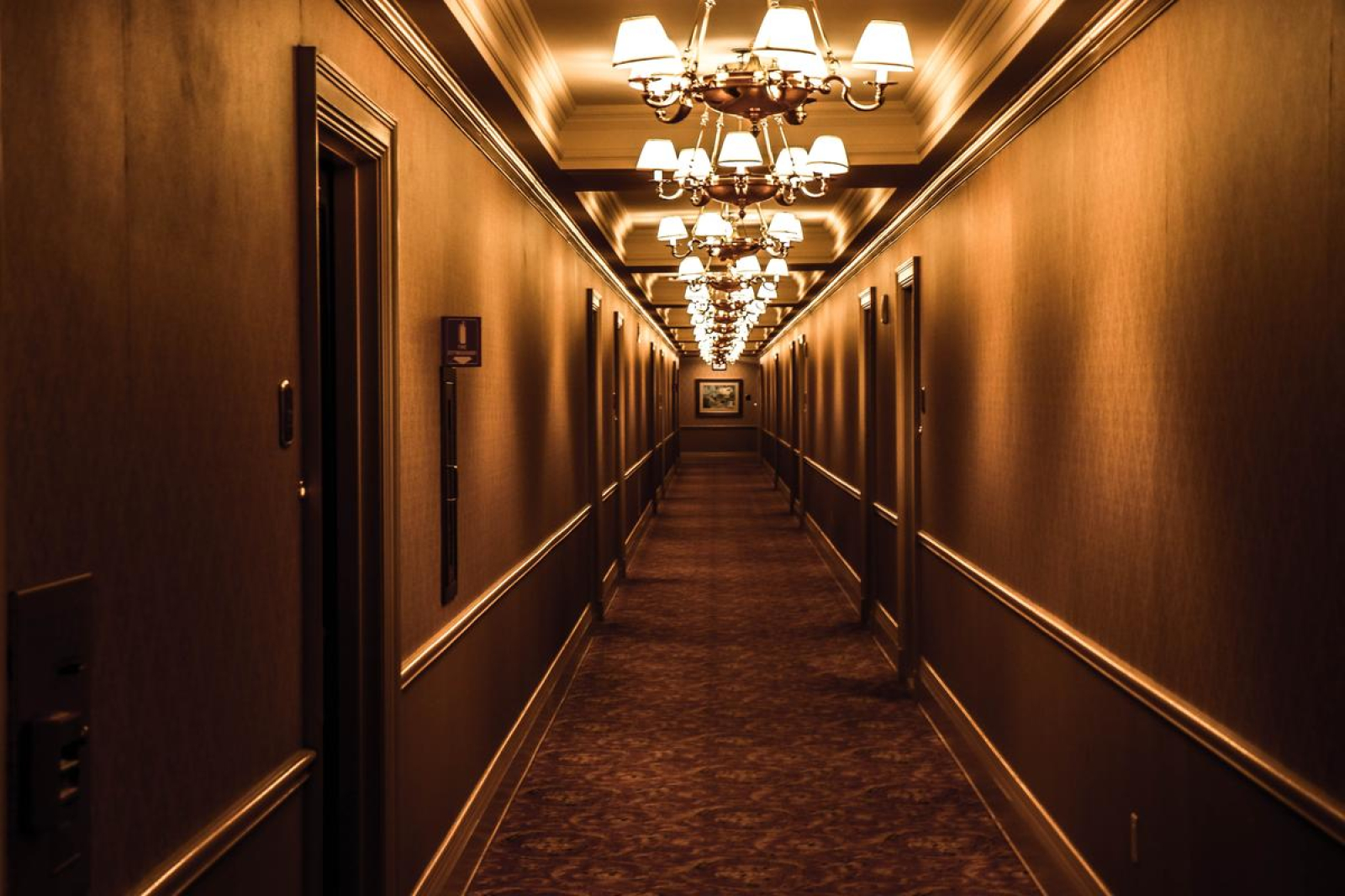 Harriett placed the neatly folded sheet on the pile next to Sissy's cart. Her eyes flicked to the small, round-faced clock over the laundry equipment and was started to see how much time had slipped away. She inhaled deeply, the scent of soap and bleach burned ever deeper into her sense of self as she stood alone among the fans and mangles. Her reality glared back at her from the piles of linen.

The cacophony of the equipment in the room drew in all other sounds, adding any knock, tap or whisper to its din. Deep in her own thoughts, Harriett failed to notice she was no longer alone. Glen Thomas stood behind her and silently watched. His beady eyes slid down her back and lingered on her firm buttocks. A meaty hand wiped at his mouth. He managed to draw his eyes back up as she turned away from her work and towards him.

She jumped back and raised her hands in front of her before she recognized him. Placing one hand over her heart she fought to regain her composure.

"Mr. Thomas, you startled me," she managed to say after a few moments. "How may I help you?"

"We're not paying you to gather wool staring at the linen, Ms. Monroe," he scolded. "I came to ensure you counterpart remembered my instructions for this evening. Where's Sissy?" he folded his arms across his chest. "She was instructed to deliver towels to room 1501 at eleven sharp. She has ten minutes to get them up there," Glen said.

"She...uh...took a break, Mr. Thomas. I'm sure she'll be back in a few minutes and I'll send her straight up with the towels, sir."

"Ensure that happens, Ms. Monroe. Or she'll be out on the street," he spun on his heals and stalked out of the room.

Harriette glanced back at the clock and swore. "Damnit, Sissy. Never knew you to take so long with an interview. Must be one hell of a ride."

A heavy sigh escaped her lips as she reached for a stack of towels. I should be heading home by now, but no, I have to save your sorry hide again.


Harriett clutched the stack of towels to her chest and watched the needle slowly crawl its way through the numbers stamped into the bronze plate over the elevator doors. The polished brass of the doors reflected her image. She blew at an unruly ringlet that had slipped down across her face as she stared into bright, honey-brown eyes.

"You deserve better than this. Don't ever stop believing that it will happen," she told the reflection. It remained silent. No expression of encouragement nor agreement showed through its slightly distorted features. A feeling of resentment or perhaps a sense of being trapped in her unfulfilled life sat heavy on her soul.

It's not fair. You are young, full of life and laughter and talent. What are you doing here? Slaving over sheets and pillowcases and running interference for a friend who shows no desire to better herself. Damnit, Sissy, why didn't you get back to work in time. You should be taking these towels up. Mr. Thomas asked you to do it. Sometimes girl, I just wanna slap some class into you, I swear.

The elevator car shuddered as the needle passed the nine. Her reflection blurred. She watched her face smear into a grotesque mosaic.

I should just leave. Go find my own gig. Find my own band. This is not for me. I have strong enough wings to lift me higher than what life has given me. The car steadied and she once again stared into her reflection, but this time a bright, defiant gaze stared back at her.

"Well, okay then. Time to leave the nest, Harriett. Time to test out those wings."

The needle settled between the one and the five as the car reached the fifteenth floor. A second later the doors shuddered open and Harriett stepped out onto a deep, red carpet. The square heals of her clunky, black shoes sank into the elegant weave as she made her way down the hall. Her steps slowed as she approached the door labeled 1501. She paused a moment to tuck her rebellious curls behind her ear before she reached out and knocked.

The door opened. As she held the towels out her heart stumbled several beats when she saw the older man with dark, gray streaked hair and a red beard smiling down at her. His eyes crept slowly down her body and her fathers words echoed in her memory.

I want you to stay away from a guy with brown hair and a red beard. He's rotten through and through.

"Your towels, sir," the words stuttered forth from her lips. Her heart pounding hard deep inside her. Her eyes darted down, then side to side, obeying an overwhelming need to look anywhere besides at the man before her.

She cleared her throat and clutched for her self-control. What was she so terrified of? This man had done nothing to her. There was no reason for her to act like he was Satan in the flesh. Hell, she didn't even believe in the practices and beliefs of her father. She would not let herself fall apart simply because of his mumbo jumbo. She raised the towels a little higher, "Mr. Thomas send them with his compliments," she said.

A deep, slow laugh rumbled out of the man. His greedy eyes settled on the hollow of her neck as he licked his lips. A shudder ran up her spine.

"Yes, our towels," he took towels from her hands and tossed them into the room behind them, "I'm sure we'll find a use for them very soon," his lips pulled back from his teeth in a cold, hungry smile.

"Yes, sir. Good evening, sir," she said and dipped into a truncated curtsy before turning to leave.

She took a couple of steps toward the elevators and her nerves started to untangle. She chided herself once more. How ridiculous she had been. If she were actually going to go out and seize the life she had dreamed of for years, she needed to grow up and stop being daddy's little girl. She was a woman, and it was time she acted as such.

She took another step away from room 1501... her screams were never heard as a strong hand clamped over her mouth and dragged her back through the open door.


****
Part One: 3 Fisticuffs
Part One: The lounge
Part One: 5 Reality Slips
Chickenbones is a copyrighted work written solely by Susan Wilkerson. Any use of this work requires the authors express permission.
Cover image: by TIM SAVAGE
Cover image: by XPLATOON