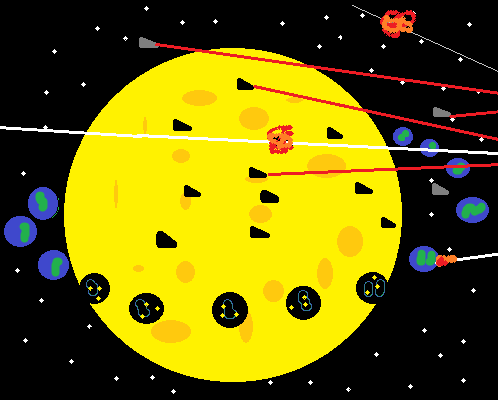 Go to CHG/Central Human Gov't. "Where we at and how we at here?" Homepage

You know how Earth life basically ended up colonizing Loki through the portals? Yeah Loki does that but to almost every planet within range that is potentially suitable for life.

Those Lokian portals weren't only linking to Earth, buckaroo - it's just that Earth was the only chad around with anything still alive on it to colonize Loki with thanks to those Old One maniacs.

Thanks to this, the process by which Earth life colonized Loki is the same process by which Lokian life, which is descended from Earth life, colonizes hundreds of thousands of worlds over the millions of years (in case you didn't read the previous thing: micro-organisms make the environment suitable for the plants to cross over which then makes things suitable for the animals, although there are cases where it was only the micro-organisms and they were therefore able to go down completely new evolutionary routes). At the start this life is generally... not very diverse as everything is descended from that same herd of triceratops that went through the portal because the grass looked greener and the early bird-like things that followed them to eat lice off of them but hey hey hey it's our good friend literally millions of years of mutations and natural selection that lets us have a very diverse selection of life forms on each and every planet. Now, you might be wondering: did this life go to Mars? Yes. Yes it did. In fact, there was intelligent life. I declare that a Martian society is totally cannon in this Universe and that it got rekked by solar flares and there's no surface trace of their society to see from Earth without digging deep into the planet. That said it's unlikely that there was ever even life on Mars... we must therefore venture further into space if we are to make space s̶l̶a̶v̶e̶s̶ buddies.
Related Location
Planet Loki
Related timelines & articles
Events and stuff within this world (article)

The New Old One Empire