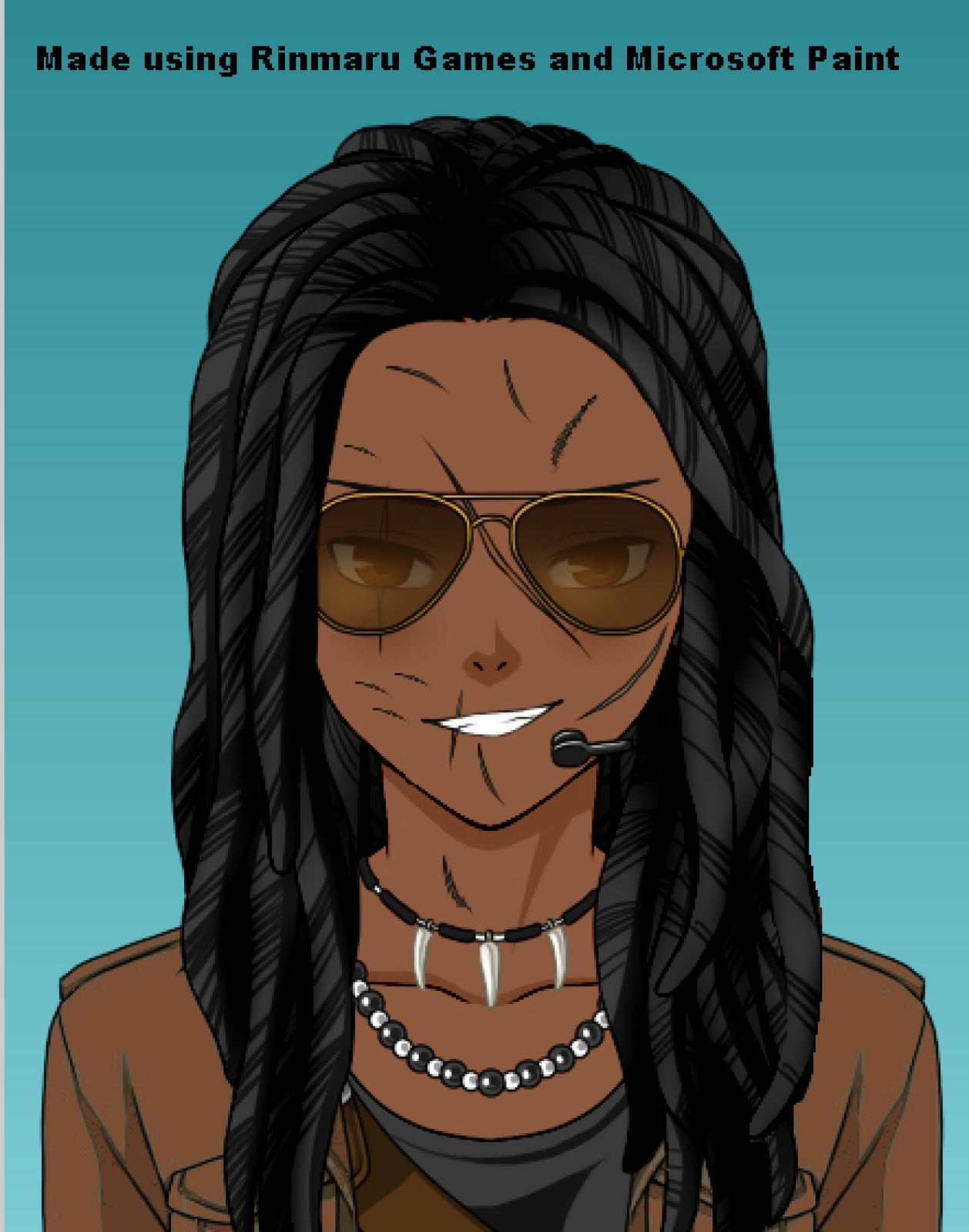 Was taught about poisoning people, dual-wielding machine guns, some basic mechanical skills, how to operate various weapons, etc by the mercenary group.

Wow, Inyoni, imagine how helpful each of those people you killed could've been against the aliens. Good job on killing so many aliens and stopping their nukes from being a problem, tho.

Some nukes slipped by her. RIP Berlin. Also that time Aramis killed the politician. And a few other things.

Extremely cunning and good at predicting how people and animals will respond to certain situations.

Morality not found. Would you like suppressed compassion and ruthless bloodlust and greed instead?

Using anything where she has to repeatedly pull the trigger to fire the weapons: it's gotta be holdin' down = spray or she ain't gonna use it effectively.

Cunning and brave... yeah that's it you're gonna have to read the books and bear witness to that character development if you wanna see more.

Her lips open but her jaw does not when confused. Grinds her teeth in her sleep.

Yes... about that... she um... can go days at a time without showering and not see a problem with it.

Has a sister in South Africa but the love between them is kinda sour.

She's basically a bully and the entire human race, herself included, are her victims whenever she talks to them. If she weren't so goddamn good at what she does nobody would hire her.

If feeling somehow unsafe she will have her hands on her hips, usually with her guns there and if not gripping her hips as if they're there so hard that extended amounts of time like this can cause bruising. However, when flexing or feeling like she's winning an argument she will put her hands behind her head, with her elbows up. This is not to be mistaken for an opening to attack as she keeps knives in her hair and has designed the holsters of her guns so that it's very difficult for anyone but the wearer to draw the guns.

Has a pair of attack dogs that used to belong to one of her soldiers, but said soldier was killed in the Egypt-Ethiopia war.

Will put her hands behind her head, with her elbows up, whenever she's flexing or feels like she's winning an argument.

Has a vault in a cave full of mines and other traps containing gold, oil, weapons, money in numerous currencies. In short not only is she probably rich no matter what wrecks the economy but she's got weapons and ammo stored up so she can make herself rich if all the goodies in there somehow becomes worthless.
Species
Mostly Hairless Monkeys Without Tails (Humans)
Year of Birth
2007 CurlyWurly 966 Years old
Circumstances of Birth
Born as the daughter of a doctor and a nurse (oh I sure do wonder how they met or what passion brought them together), with 2 older sisters.
Circumstances of Death
She defected to South Africa to fight the Goners there as she considered protecting a location that people actually lived in more important than the Antarctic's uranium. She got a plasma blast to the belly.
Birthplace
South Africa.
Current Residence
Alongside her dead children, with her shrine having the words "lawless hero" on it, right next to her son who has the entire lyrics of "soldier boy" from Avatar on his.
Biological Sex
Female
Sexuality
I think her having 4 kids with a member of the male species can reveal the answer to that.
Eyes
Brown
Hair
Long, thicc dreadlocks. Varying between brown and black at parts as she never cuts her hair.
Skin Tone
Black, slightly dark-skinned.
Height
5'8
Weight
72 kg
Quotes & Catchphrases
"Nothing has a constant worth, so I might as well try and get as much of every kind of wealth as possible" - Inyoni explaining why her vault contains money of dozens of currencies, gold, silver, obscure collectables, weapons, ammo and several barrels of oil.
Aligned Organization
United Commonwealth
Other Affiliations
Known Languages
Zulu, English. No that's seriously it she hires interpreters a lot.