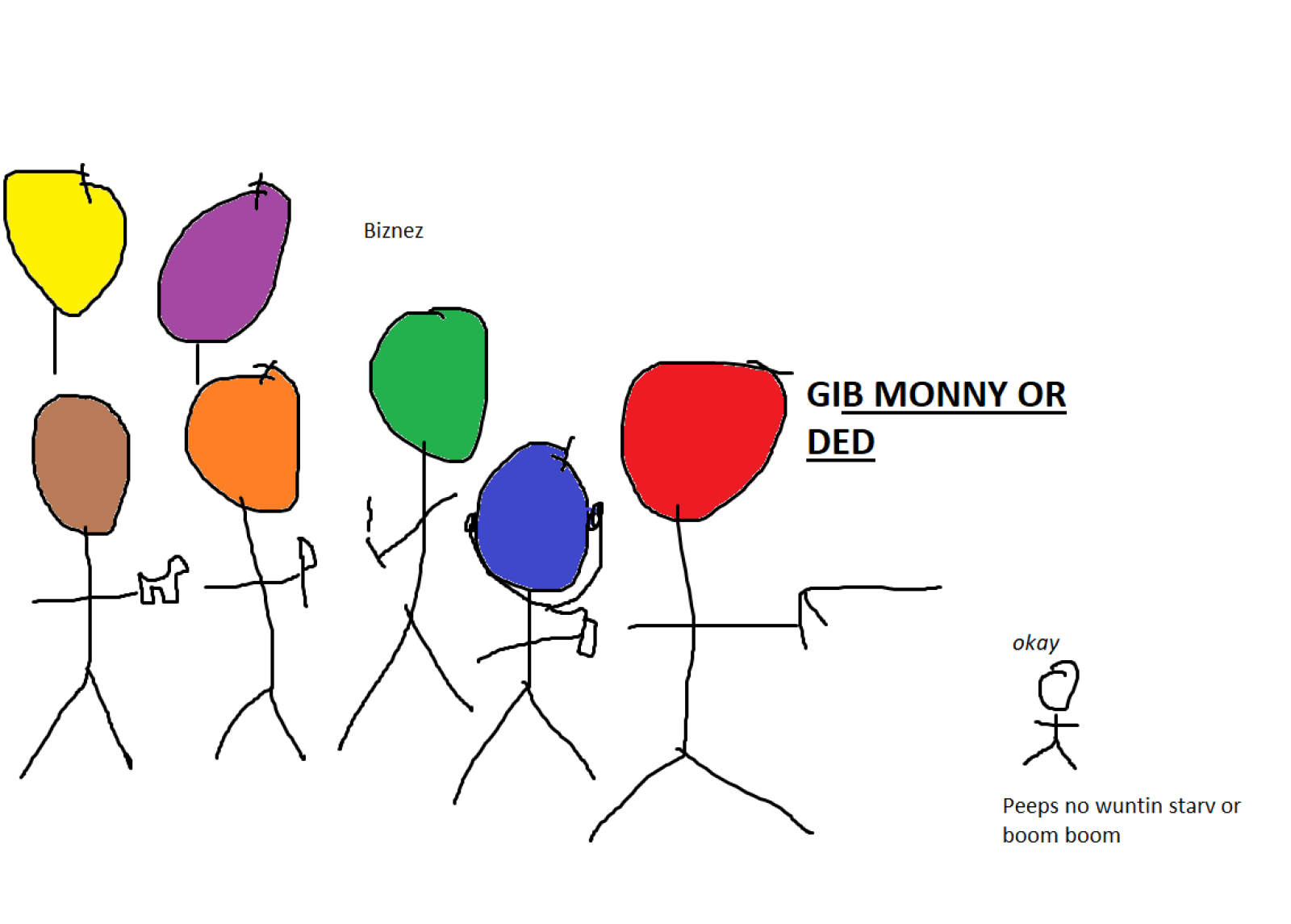 Across the territory of the CHG megacorporations engage in entire wars over territory to sell in and recruit from while the CHG government itself just grabs some popcorn and reminds them to keep paying their taxes, so megacorps specialising in selling war materials to the government, megacorps, frontier worlds, merchants, pirates poorly pretending to be merchants and so on have a huge advantage and so do corporations that are already stupidly huge, So, megacorps will sometimes make alliances with one another, often sealed with the pressuring of members of the families running those megacorporations (getting a license to own businesses on multiple planets is extremely difficult due to the length of queues and even those who apply vast bribes can only expect the wait time to go from "never cos people are constantly bribing their way in ahead of you" to "cool dude give it 23 years". This led to a culture of megacorps being run by families, with it rarely being the actual license holder that's running the show. Non-family members can buy shares and bigger contributors can make suggestions but the families are only about as willing to follow those suggestions as they are to think it serves their own interests - which normally consists of trying to find legal loopholes, often with assassinations, sham marriages and blackmail built in, of regaining shares to keep more of the profits to themselves or redistribute shares to those more useful in the moment than the grandson of some dweeb who shilled out his life savings to get the company off the ground in the first place) into marriages with one another. Where does that come in with the Hellfire Alliance? It comes in with the fact that the Hellfire Alliance consists of 7 megacorporations, Hellfire MInc chief among them, that work together to seize and protect territory from outside megacorps, as well as to throw stupidly huge parties. There are also many smaller corporations and businesses included in this alliance but they're mostly pawns not worth mentioning. Hellfire MInc (war materials like ships, guns etc, has origins in the The Secret of the Muffin ), Heavendust MInc (drugs. Research department works closely with that of Glanis. Will sometimes distribute drugs that cause health problems when Glanis needs a pick-me-up. Born of a drug syndicate "going straight" using laundered money in response to drug law changes, specifically reduced restrictions on many planets. Still sells illegally on the planets that ban drugs, even if through pawns to avoid personal implication), Glanis MInc (medical. Started as a front for organ theft and selling but laws surrounding that have changed so now they just extort organs in addition to many other medical practices) Flavourville MInc (started as the result of a mafia extorting a town finding out that it was home to some of the best cooks and secret recipes in the CHG and responding to this information with pressuring them into working in restaurants this mafia family owned, helped along with threats, marriages, getting a small portion yet also a large amount of the benefits from this arrangement and occasional murder) Grantells MInc (general media, mainly but far from exclusively holovision. Gained much of its success from the illegal creation of an animation AI followed by faking the existence of 9 individuals per actual worker as a means to cover it up. Made a similar AI for the production of music known to "sound good but utterly lack any actual meaning") ModelPrints Minc (vast space factories full of 3D printers and cheap workers piecing the printed pieces together into various things like children's toys, holowatches, holorings, household items, etc. Provides a lot of parts to Hellfire Inc. Born of a teenager inventing spray paint that sticks and expands and his friend going "wait we could use this for 3D printing", them starting a company, one of them only having one child - a daughter - due to being accidentally shot in the testicles and the other disinheriting all but his favourite child, being the one that had always gotten the best grades and had the biggest superiority complex and also a daughter, those daughters being pressured into marriage, and 2 of their children being really good with the business upon the death of their grandfathers) Bobbyclub MInc (basically a hub where various individuals offer various services, those seeking services (including sexual) go on the website to pay someone to perform said service, and Bobbyclub MInc shaves a nice 30% off the top of whatever the service providers are paid in addition to there being a monthly fee. Also used for human and alien trafficking and money laundering. Also used by assassins using code languages since Bobbyclub MInc absolutely does keep a record of all accounts and transactions but pretends not to. Bobbyclub MInc itself also owns many smaller companies dealing with things like plumbing and other services (sighs yes, including sexual) that provide their services through Bobbyclub MInc) Overall, they're really not to be messed with. As much as they specialise in the areas clarified above, pretty much anything in their territory somehow benefits them. Water? Glanis MInc got the contract from your city's awfully beaten-up looking mayor to fix the under-maintained outdated water filters. Need someone to fix something? It's being done through Bobbyclub MInc. Even things that shouldn't have any relation in the slightest will turn out to just be a casual side-property of one or more of the Hellfire Alliance's member megacorps, usually for laundering of money from their less legal operations. Universities? Literally owned by Heavendust for being prime territory to sell illegal drugs. Giving money to homeless people? They're being extorted at gunpoint for most of that by a smaller puppet of the Hellfire Alliance, and probably being extorted of their organs or free labour or both too if they make the mistake of signing any contracts. Going with your spouse to the park? Oh yeah it was made by Grantells as a setting for some of their shows and you have to pay to get in.

Hellfire Inc first built the alliance with Heavendust (names in top excerpt are in order of when they joined) and since then has always been the leading internal faction, further compacted by being the one with the most military might, even if it's usually the one making the least money out of the lot. Each company then has its own internal structure but the general gist is that there's a lot of scheming and internal espionage within each company and occasionally across them. As a rule each company has to go for nomination succession, in which all assets are legally passed to an individual pre-chosen by the current owner before their death, although the issue of who's actually running things and to what degree in each family is constantly being contested.

Despite the internal plotting that is commonplace within each family, relations across them are generally pretty good or at least good enough for nobody to go disrupting the highly profitable order they've created.

The entirety of 87 solar systems, with partial control over 243 more. Basically anything they want from those systems and worlds under their control is theirs to use as they wish, including to trade for what few wants can't already be provided by their territory.

Each has its own history but in short Hellfire took over a tonne of turf and then buddied up with the biggest drug company around before the others naturally added themselves in the order listed in the top excerpt. 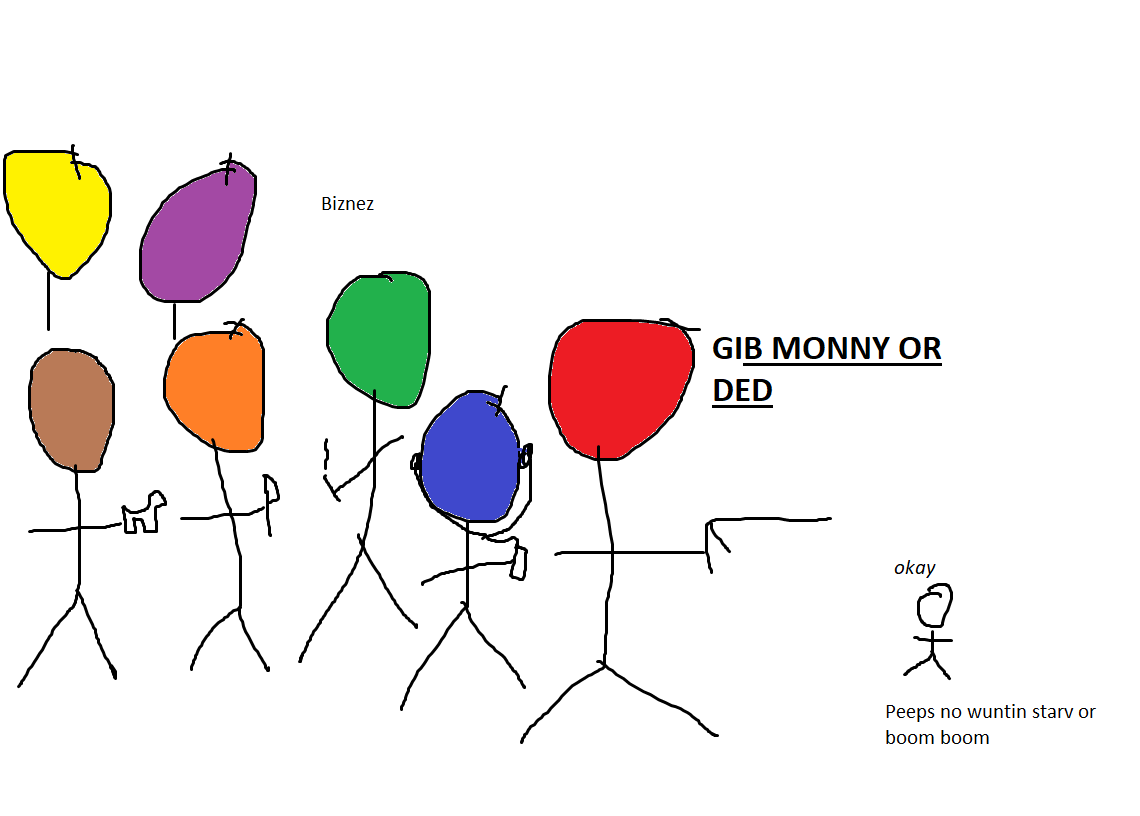 Fellow homies, I have created a golden image for this article but know not of how to upload images under this new system. Give me your wisdom, I beg of you.

"The Secret of the Muffin" doesn't lead anywhere.