The Case of the Disappearing House

In the northern Sunstone Citadels, there exists a lavish manor with an odd quirk: the moment one takes their eyes off it, it vanishes not just from sight, but also from memory. Simply catching a glimpse of it in the distance can cause a stutter in one's memory; an odd discontinuity of conscious experience. One who wanders too close finds themselves facing away from the structure.   While eerie, the site is largely considered little more than a curiosity in its current state.   The phenomenon has inspired various stories and legends, along with spurring a deeper introspection in the nature of the nation's governance.   Despite extensive investigation and research, there's a question nobody seems able to answer: just whose house was it?

While it was long-established that some sort of memory block existed over an area just a mile from the closest city, nobody was quite sure what this implied for the longest time. At first, there were stories about a Forgetful Forest- a copse of trees that would always push explorers away from it. As a result, this particular patch of woodland remained despite being so close to a nearby settlement. All around it was mostly deforested, harvested for fuel and materials.   Some believed that it was a sort of nature spirit. However, given the region's natural infestation of haunts, there was no reason to believe that the environment was ever anything but malicious.   For decades, it was little more than a curiosity.

Then, it attracted the attention of mages. As delving through eldritch ruins left by the land's predecessor civilizations was essentially the primary source of income for most career mages, exploring this phenomenon seemed like another day on the job. There were some who, exploring the memory block's limitations, realized that they could simply walk at the structure with their eyes closed and explore it through touch. Invariably, such individuals were never heard from again.

No amount of money would ever make me go back there. Just thinking about the damn thing feels like I'm being smothered.   That being said, I'm surprised you would be so invested in this, my lord. There's a rather popular bit of writing going around lately. It levels some serious accusations; I'm sure you've heard.   Of course, you yourself are innocent. This was all far before your time. That being said, the writer all but outright stated that your family was complicit in... whatever it is that took place. Wouldn't it be in your best interest to let this mystery lie?

For the better part of a century, the region was nothing more than the Forgetful Forest.   It was only when this phenomenon caught the interest of Hauntfall's resident Cotd sorcerer, that any meaningful headway was made. Humoring a persistent favored student, she traveled to the area. Using her race's not-quite sight, she began to sketch the structure with her back turned to it. Partway through, she suddenly stopped, seeming completely frozen for a moment. Then, eyes closed, she stood up and walked away. Only after passing the treeline did she re-open her eyes and take a gasping breath.   To this day, she refuses to elaborate on what she saw that unsettled her so. This would be the first and last time that Aquila visited the Disappearing House. 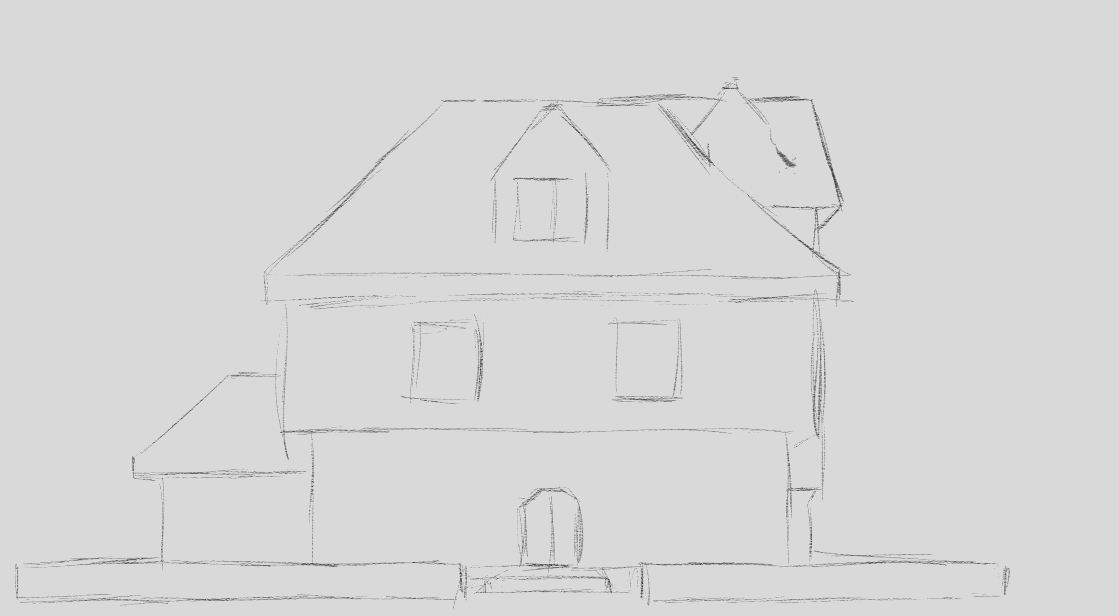 Many who have seen the sketch believe that she saw something in the tower window.

While its exact origins are murky for obvious reasons, much can be intuited from the building's appearance: an almost comically stereotypical noble's seat of power. Small compared to those of other nations, but extravagant within the culture. This is due to the expense of keeping space lit with sunstone- many commoners in the region's settlements can't even afford the privacy of walls.   The use of windows implies renovations in the post-Stormgate contact era, as glass was not readily available in the land beforehand. On the other hand, the foundations suggest pre-Hauntfall (possibly as far back as 750- no earlier, given the use of sunstone). With over a century of continued existence at minimum, it's simply unthinkable that nobody would know of the owner.

The mage delving culture is responsible for a lot. From the moment they earned their silver wands, mages were told that the only way to meaningfully gain wealth and power was to explore the trap-laden ruins scattered throughout the wilderness, searching for magical reagents, treasure, and combat experience. By its very nature, advancing as a mage without existing financial backing was extremely high-risk, high reward.   The people trained to believe such gambles are a necessity will eventually run into a more intelligent sort of monster while exploring these ancient ruins. Contracts are formed. Most are brief, and end horribly. However, sometimes it works out, often enough for such individuals to form support structures and give themselves a name- diabolists.

As time went on, awareness of diabolists grew: many prominent rulers and archmages were implicated to be part of such circles, several long after their deaths. Given this new context, the disappearing house's implications became far more unsettling. While a general sense of unease and suspicion of authority grew, it culminated in the book that gave this phenomenon its current name.

Had it been the mere work of a demon, one could simply consider the situation a cautionary tale on the dangers of darkness and the folly of attempting to bind it. Unfortunately, I do not believe this to be the case.

The Disappearing House gets is name from a treatise published in early 936. It's simultaneously a case study of the magical phenomenon, and a condemnation of the Citadels' system of governance. Its double meaning is meant to invoke a degree of suspicion- either the rulers are too incompetent to realize that one just below them has been erased, or they were complicit in the act.   The core premise: This wasn't a natural curiosity; nor was it simply a case of a mage dramatically overreaching. The sheer thoroughness of destroyed records implies that it was the intentional targeting and erasure of a noble family. This would explain why no records exist. Whatever magic shrouds it from memory had been shown not to affect writings and illustrations, after all. Instead, it would be something arguably far more insidious.     The work gained significant traction not only for the insights it offered, but also through simply being an incredibly engaging piece of writing.   The Case of the Disappearing House became incredibly popular throughout the continent, aided by Whirlpool's printing capabilities. Most readers treated it as a series of parables and case studies on the implications of power of various types. Few knew, or even cared, that it was a true story.

Unless otherwise noted, all writing, images, and 3D models by James Do (Argoms) (except for the default WorldAnvil theme assets)