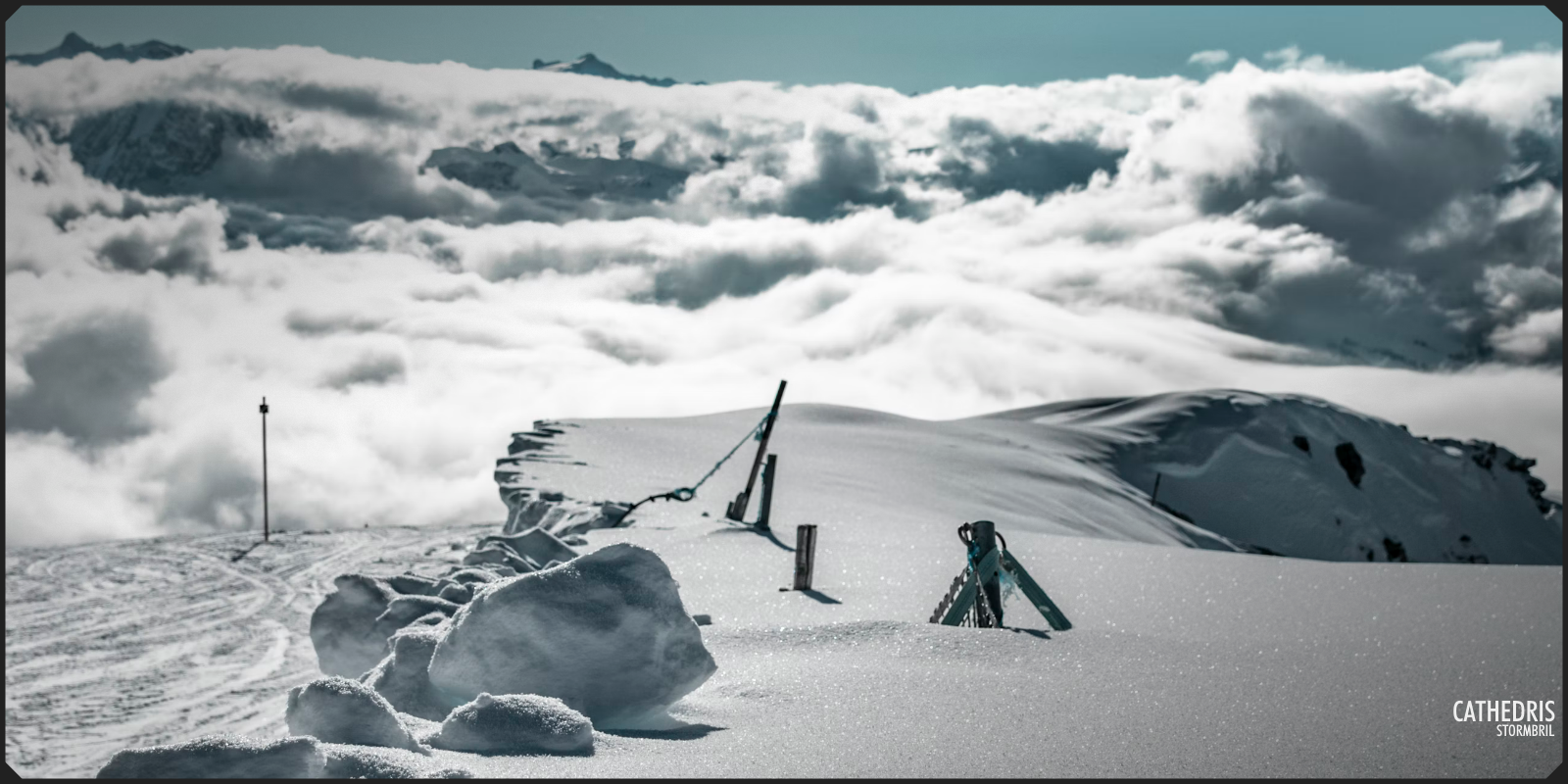 With nothing left, you eat what you can

You can't truly call yourself an ice runner if you haven't run out of supplies and had to drink the worms.
— Veteran Ice Runner

For members of the Legion running to and from outposts among the glaciers of the Cradle of Ice, food is always of utmost importance. It can be days or sometimes weeks before they reach their destination, and if they're on a return trip after dropping supplies off, they are often limited to just a small amount of food to make the trip with.   Thankfully, the glacier provides -- those who travel upon the ice are never far from a nutritious, protein rich slurry of ice and worms.

The ice worms are easily found in late day sun, when the light shines through the ice and shows em all up near the surface.
— Ice Runner

Ice worms can be found by the millions, in large swathes across all twelve Cradle glaciers. They live a cyclical life, gorging once on surface snow algae, before diving below into the ice to mate, lay eggs, and die. During mid-day they're generally deep within the ice, as they need the cold to survive long enough to create the next generation; but at evening and dawn, they can be found much closer to the cooler night-time surface air.

If you keep twisting the auger for too long, you'll melt the ice and and up with slime, and nobody wants that.
— Veteran Ice Runner

It's during this time that the worms are easiest to harvest. Using a specially modified ice auger with a collection shroud attached, hungry Ice Runners can drill into the ice where a large patch of worms are found.   The motion of the blades spiraling into the glacier works well to blend them and the ice into a semi-homogeneous frozen meal.

If this is your first time... you drink first.
— Veteran Ice Runner

Once the consistency of worms and ice approaches a palatable level, it becomes dinner time. The auger and attached shroud are pulled up, forming a sort of make-shift pot. A ladle is used to scoop out portions of it into durable metal cups, wrapped in leather so as to protect from the cold.
The drink forms a sort of horrific gray-ish brown and black slush, depending on how long the auger spun for, and how cold the outside temperature is.   The main portion of the drink consists of shaved ice, turned shades of gray and brown from the pulverizing of hundreds of worms. The worms themselves are mostly emulsified, but small bits of them still exist whole, existing as black flecks within the slush. 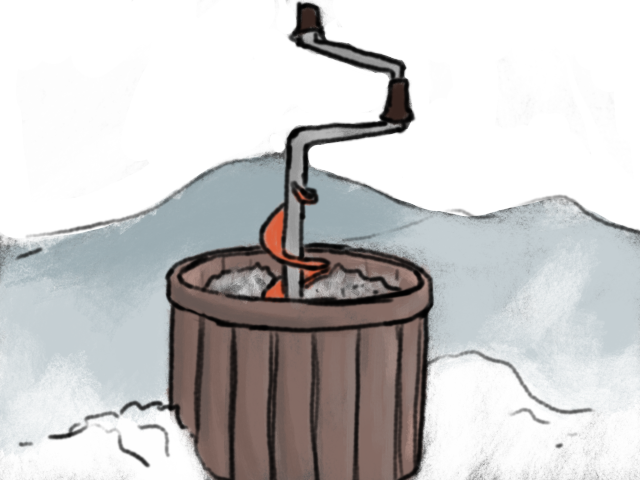 Among teams of two or more Ice Runners, the tradition is that the newest team member must be the one to take the first drink -- sometimes with the twist of toasting to the worms, for without them, the Ice Runners would likely die. 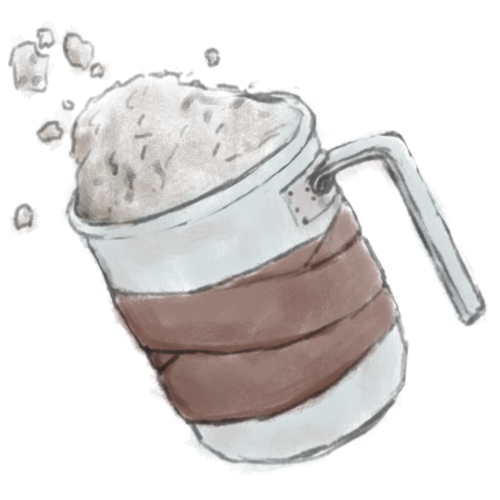 The Ice Worms seem to be a unique species of worms, found only within the twelve glaciers that make up the Cradle of Ice. They're the only species of worms found within all of Cathedris that appear to be able to live in sub-freezing temperatures.     The worms have a body diameter of about 1mm, are an average of 6-10cm long, and weigh somewhere around 1g. As they live in temperatures that are below freezing, they have specific adaptions that help them to survive these frigid temperatures. The main thing keeping them alive is their blood -- brown in colour, and packed to the brim with sugar, which stops it from freezing and keeps the tiny animals moving through the ice.

I'm not ashamed to say how much I enjoy drinking this slush. I even drink it when I'm off duty -- that's when I like to add in a lil' bit of the homemade special stuff to give it an extra kick.
— Veteran Ice Runner

Smoke belching failure-ridden machines built to cross the dangerous barren glaciers of the Cradle of Ice.

Leftovers from the Seven Day war; bits of dead gods and magical blood mixed with magic and the local wildlife to become the monsters in the dark that people fear.

Answering: "Α food that marks a rite of passage for a culture in your world"
Visit Stormbril's Competition Page Check all other answers to this prompt Competition Homepage

Only one question remains -- chunky, or smooth?

OMG this is so gross and also so clever--every quote adds a wealth of personality to this article! :D

Thank you so much Dani! :D It was a lot of fun to write this disgusting thing xD

This article made me feel... many emotions

That is exactly what every writer likes to hear :D

What a rollercoaster of an article. Not what you expect from a food article, hah! It's really well done, I love the nutritional info and especially all the amazing art :D

Woooo! I love dipping into the unexpected sometimes. Thank you for the lovely comment :D

This is an amazing and super cool article and idea, but also absolutely disgusting XD Did you actually look up worms' nutrition information??? XD I really love how clever and logical eating the worm is . and the guy at the end just loving them so much he drinks them for pleasure! XD

I love hearing that! xD I had so much fun writing this! The nutritional information was mostly based off of what protein shakes would have, and some assumptions of what very sugary worms might add to it xD   Thank you so much :D

I wasn't sure what I was getting into when I started this article, but I was not expecting worm slushies! Nice work here! Real question though, do people in cold climates eat cold things when they're outside? I'm a Floridian, so I literally don't know!

Mmmm, tasty blended wormmssss...   Definitely! I'm a Canadian who loves ice cream during the winter (let's be honest, I always love ice cream lol), but it's especially good during the cold since it doesn't melt so fast. A fun thing to do is also to take maple syrup and pour it on fresh snow for a sweet cold treat!   ...we don't eat ice worms, though xD

Mmmm, yummy... I really like the idea of this one. One does not get to be picky when one is traveling in a hostile climate. Poor worms, though...   I like that you added nutrition information, and the quotes about the slush are wonderful to read!

Thank you so much! This one was particularly fun to make for me :)