Cathedral of Our Eternal Protector


Located in Esé-Nal in the city of Imlarnin, the Cathedral of Our Eternal Protector is the largest church dedicated to Corellon Larethian, God of War and the Arts, in the world. Its age and size have established it as one of the most sacred sites of the Seldarine-Ayer and it is a popular pilgrimage destination. The cathedral has long been the centre of the Eternalist branch of Corellon's church and is viewed as the centre of that denomination's power. Its status and influence have been greatly weakened since the Gregorian Blasphemy of 1128 PC (103 AR).


The cathedral is situated atop one of the many hills of the city of Imlarnin. At the time of its construction it was on the outskirts of the city, but as Imlarnin has expanded the base of the cathedral's hill has become surrounded by house and streets. The hill is unusually steep even for Imlarnin, and attempts to climb its sides are fatal more often than not. The only safe ground access to the cathedral is across a long, narrow bridge that joins with the top of a nearby, more accessible, hill. This awkward location was a deliberate choice by its architects, who wanted the cathedral to be able to double as a fortress should it be necessary.

As a consequence of the limited building space atop its hill the cathedral is taller than it is wide, pushing the limits of the construction materials and techniques available when it was built. The cathedral was deliberately built to appear ornate and inspire wonder, while still being built to be easily defensible. There are few entrances into the building - and all the doors are heavily reinforced - and the cathedral's grand windows don't actually reach down below the first floor. Viewing rooms at the top of the cathedral's towers offer an excellent view of the surrounding lands, and the bridge was built deliberately narrow to restrict how many attackers could cross at once. The cathedral's walls are hard stone and are thicker than strictly necessary, while internal buttresses and columns are more prevalent than in other cathedrals. While not up to the standards of a true fortress, the cathedral would be a tough building to assault even before considering its precarious location. 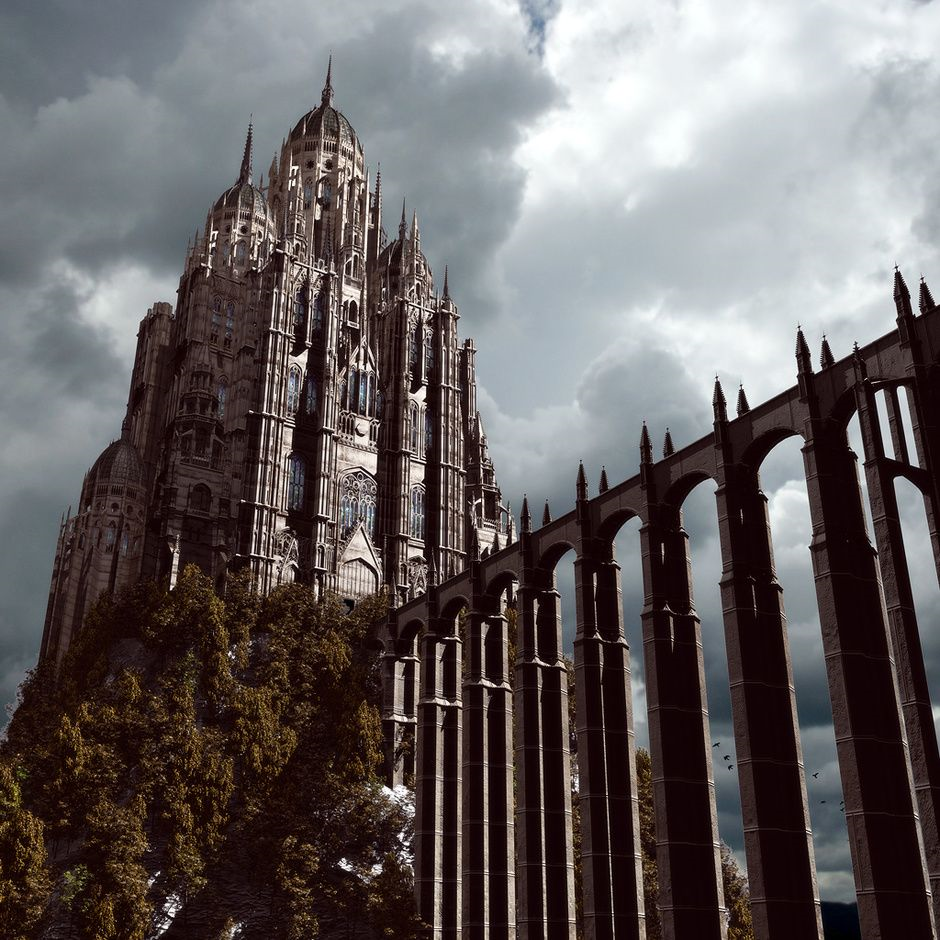 by Jean-François Liesenborghs
The Cathedral of Our Eternal Protector

Shortly past the main doors the cathedral boasts an enormous, open-plan worship room with rows of seating broken up by thick columns. This chamber is lavishly decorated, brightly-lit, and can hold eight hundred worshippers at a time. Beyond this central chamber the rest of the cathedral is dominated by spiral staircases, narrow corridors, and a counter-intuitive floorplan, all deliberately designed to make it easier to defend should the outer door be breached.

The cathedral contains accommodation, kitchen and storage facilities, a library, a treasury, and the many offices required to manage Corellon's sprawling religion. Enough supplies are kept in stock at all times to withstand a siege, and if rumours are to be believed the cathedral has some magical means of providing fresh water.

Beneath the cathedral, built into the hill it stands upon, are levels upon levels of crypts. Here for centuries the honoured dead were laid and their bodies maintained by the priests of Corellon. The intent was that, in times of great need, the dead could be called back to serve again. This has only occurred on a few times throughout the cathedral's history. Following the Gregorian Blasphemy the crypts have been used in a more conventional use, holding the non-preserved bodies and bones of the dead. No one outside the Seldarine-Ayer's hierarchy knows how deep the crypts go - and it might well be that the priests themselves aren't quite sure. 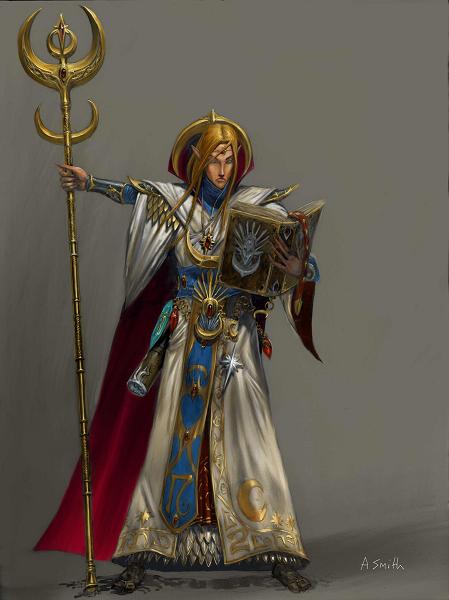 by Adrian Smith
A high-ranking member of the Seldarine-Ayer
As a stronghold of the Seldarine-Ayer the cathedral serves multiple functions. Its original purpose was of course a religious one, and regular services are still held in its great central chamber. By long-standing tradition the services are open to all worshippers, so long as they can swear to the Truthseers guarding the door that they will cause no trouble. Over the centuries its role as a place of worship has gradually fallen in significance to the Seldarine-Ayer as they focus on its other functions, but it remains a truly sacred place to the common worshipper of Corellon. Pilgrimages to the cathedral are common, with worshippers travelling from across the nation and even beyond to visit. It used to be that the priests of the cathedral were renowned for their skill at resurrecting the dead, second only to Selah's priests, and desperate families brought the bodies of their loved ones to the cathedral in hope that those lost to them could be returned. Such a practice was abruptly ended by the Gregorian Blasphemy, which has prevented all resurrections within the walls of the cathedral. The cathedral remains a popular destination for its ancient and sacred nature, regardless of its restricted utility.

In addition to its religious role the cathedral serves as an administrative centre for the church of Corellon across Alliance lands. Many of the upper echelons of the Seldarine-Ayer have their homes or offices in the cathedral, and use its facilities to coordinate the Nalunaran branch of the church. In particular the cathedral is the centre of the Eternalist denomination, and is the hub of their political and propaganda campaigns against the Finalist denomination. The cathedral is also designated as an emergency redoubt for the Seldarine-Ayer in the event of some calamity, and its defenders regularly run drills to simulate such a catastrophe.

As the heart of the Eternalist movement, the cathedral played a significant role in the practice of reposing. In the vast crypts below the cathedral the honoured dead were kept in a magically-preserved state thanks to constant ministrations from the priesthood. The bodies were prevented from decaying and the spirits of the dead were kept tied to their mortal forms. In times of great need the spirits would be recalled to their bodies and the dead would rise again to defend their church. Other sites across Esé-Nal maintained these reposing dead, but the cathedral was the centre of the practice and boasted by far the greatest number of honoured dead. 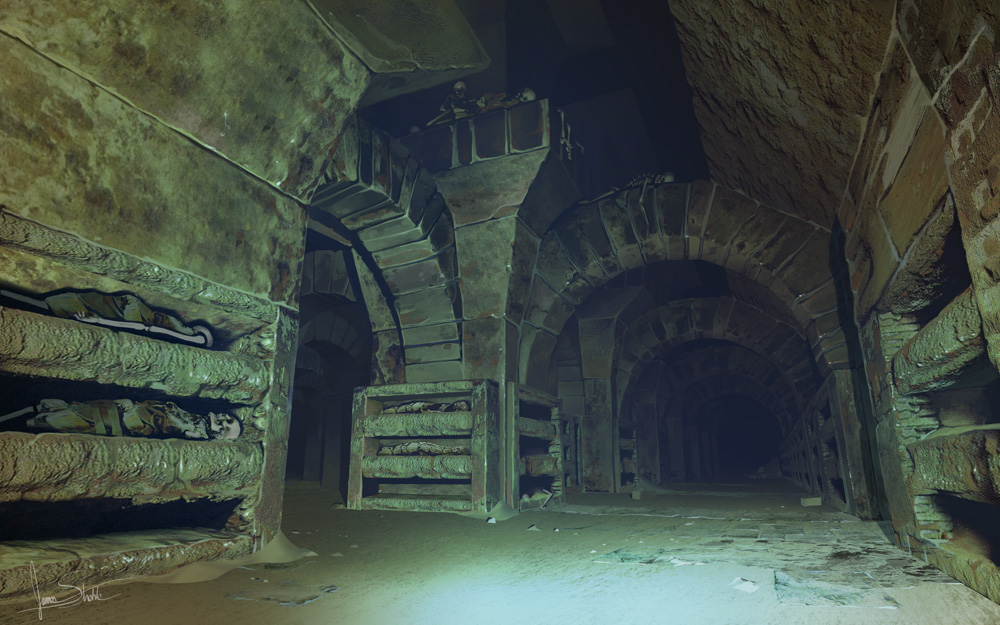 by James Wolf Strehle
The crypts below the cathedral

This practice had always been a contentious one. The Seldarine-Ayer themselves were split, with the Eternalists supporting the practice and the Finalists arguing against it, and the religions of some other gods - most notably Selah, Goddess of Memory and the Grave - were fiercely opposed. This had led to a lot of tension both within the church and outside it, but the tension had largely been restrained to words and arguments.

This uneasy state of affairs changed abruptly in 1128 PC (103 AR), when Sir Gregor Boley, the Hand of Selah, somehow infiltrated the cathedral's crypts with his companions. While his companions held off the outraged Seldarine-Ayer, Sir Gregor performed some sort of ritual deep in the bowels of the crypts. It cost him his life, but it completely altered the rules within the crypts and the cathedral above. The reposing spells on every body were ended all at once, and every body instantly decayed to dust while the bound spirits were cast deep within the afterlife.

The ritual had lasting effects too, and ever since that day the boundary between life and death has been rendered inviolable within the cathedral's grounds. Within its walls no repose spells work any more, and perhaps worse no resurrection spells work either. For a famed church with a priesthood skilled in, among other things, healing and resurrection, this was a crippling blow to the cathedral's prestige. Whatever Sir Gregor did remains active until this day, despite the repeated efforts of the Seldarine-Ayer to end the effects of what they call the Gregorian Blasphemy.

Sir Gregor's actions were seen by the Seldarine-Ayer as an attack on Corellon's church. Relations with the church of Selah were already tense, and only became worse following this incident. Although Selah is now dead her sister Wee Jas, Goddess of Law, Magic and the Grave, espouses many of the same tenets as Selah did, and so the Jasidin church has inherited much of the Seldarine-Ayer's enmity. The Blasphemy also tarnished many elves' views of humans, for it was a human that committed what many elves view as a crime against both church and state. Although Sir Gregor acted alone, without the authority of any human government, it is not exactly a secret that most humans broadly approve of the Hand's actions.
Location Imlarnin, Esé-Nal, Nalunara
Owners Seldarine-Ayer (Eternalist denomination)

Hey there, thanks for entering the Sacred site challenge, be sure to share your article on Reddit, Facebook, Twitter and any other social media sites! Remember more hearts (at the bottom of the page) increases your chance of winning!