"...I am not mute. There is just nothing worth talking to you about."
- Sharla
Sharla doesn't say anything more. Instead she turns away, puts her headset back on, and continues to ignore everyone around her.

Sharla is a Vusinor 'created' in the city of Barun Deth, Vefaria. Growing up, she had a kind, outgoing personality and wanted to be a lot like her mother, Zilda Marn ...until she learned that she was a clone of her mother and her mind was supposed to be wiped and taken over, which she didn't learn until after her mother's death. After that she became much more...blank, insular, a reclusive shut in.

As said, Sharla's personality is not a very open one. She doesn't listen to most people and she barely speaks at all. As if to drive this point to everyone around her, she will put on a headset if you try to talk to her, and it's difficult to tell if she's ignoring you or not. The are only a handful of people she will show any kind of warmness to, such as Kaline, and her friends Elya Sarai and Raini Fior. You can tell if she cares or not if she doesn't have her headphones on when listening to a person.

The Vusinor Species have the unique ability to perfectly clone themselves with no genetic defects, or at least so few its negligible for hundreds of iterations. This gives Vusinor the ability to live potentially infinite lives by switching between clone bodies. Sharla Anri Marn, originally designated Clone ZM-C-616, was to be just the latest in a long line of Zilda Marn Clones. Zilda, after upoading herself into a fresh clone body that was about 25 or so years old, she had ordered another clone from the Vusinor Research Corps HQ in Barun-Deth Vefaria.
Zilda had two choices when it came to her clone. she could keep the clone 'on ice', or rather, in suspended animation in a specialized holding tank, at the VRC HQ. She could instead raise the clone as a child, which makes for a much stronger body, but it is not recommended by the Vusinor to do so because of the emotional break that might happen when the child's mind is wiped and the parent takes over.
Zilda always went with option with one. At the time she ordered Clone ZM-C-616, she was friends with Kaline Serna and several other Regalti at the time who were raising young children of their own. Zilda was a scientist, she had lived for more than ten millennia, and has been to thousands of worlds, but raising a kid was something she was scared to death of doing. With convincing from Kaline, Zilda decided to not put her clone on ice. She instead gave her clone the Regalti name Sharla, which was a word for a type of blue flower. With a little help from Kaline, Zilda started to raise her child. 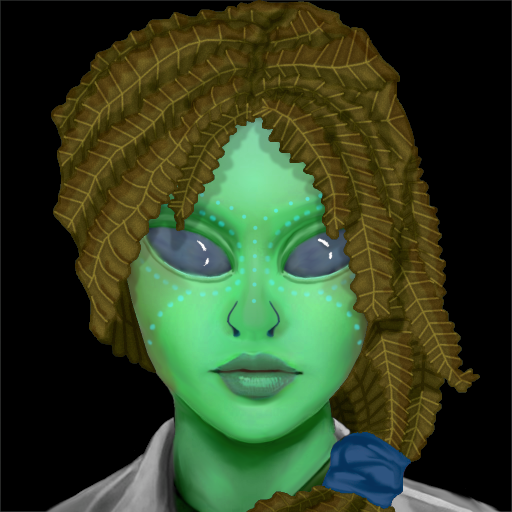 Sharla grew into a kind girl that was interested in learning everything she could about the world around her. Despite looking different and being an entirely different species, Sharla was friends with just about every Regalti around her. Her infectious personality could brighten anyone's day.
When Sharla was about 10, she grew very interested in her mother's work, and wanted to be exactly like her some day! Zilda was happy about this, but was also completely mortified! By raising Sharla, Zilda wondered about the literal hundreds of other clones whose minds she wiped and took over. Sure they were empty minds that never learned a thing because they were left in suspended animation, but they could have been like Sharla, like her daughter.
Zilda left on what would be her last mission with the Void Chaser in the year 378 A.E. when Sharla was about 12...Zilda didn't return, having sacrificed herself to save the Void Chaser and her crew. The chip that would have held her mind was destroyed, or at least couldn't be found. Sharla was devastated that her mother had died. Kaline had the child live with her after that.
About a month later, representatives from the Vusinor Research Corps knocked on Kaline's door, looking to collect Sharla. Kaline wasn't having it, but the VRC had authority over all Vusinor in the Delvi system, and by Cairn Sector laws, Vusinor Clones without the original mind aren't technically people. They are property.
It was only an intervention by the Venerable Captain Uul that it was stopped, but not before Sharla learned that she was a clone of her mother, wasn't technically a person, and had her mother's chip survived, her own mind would have been wiped.

(Placeholder Space for an article block/ article about Sharla's mother, Zilda Marn. I'm working on it...)

(Placeholder Space for an article block/ article about the Void Chaser's Last Mission and how Zilda Sacrificed herself. I'm working on it. If you are interested, you can read a short summary of that mission in this old article: History of the Void Chaser)

Sharla grew cold and distant from everyone after learning the truth. Instead of that child that could bring a smile to anyone who talked to her, there was a cold being that didn't acknowledge your existence.
When Sharla was about 18, she joined the RAN (Regalti Allied Navy) for military training, and was to be stationed aboard the Starship Void Chaser so Kaline could keep an eye on her. At the academy, she met Elya and Raini, who were also to be assigned to the Void Chaser. Sharla tolerates their presence and is every so slightly more open with them than others around her.
When they got out of the Academy, all three were assigned to the Void Chaser. Sharla was assigned to be the communications specialist. she does the job well, but her monotone voice makes her sound like an artificial being over the radio. When she came aboard the ship, Captain Sul gave her the key to Zilda's room. Maybe Sharla could learn something about her mother in there? Sharla has yet to open the door to her mother's room and wants nothing to do with her.

Commanded by Captain Uul, this Starship is a Scout class, meant for taking on long-range missions through deep space...

Sharla's mother lived for ten thousand years and was a scientist through nearly all of it. Sharla started studying these subject areas at a young age because she wanted to be like her mother, at least until she learned just how much like her she really is. Still, she spends a lot of time reading through her mother's old research logs because it is one of the few things she has to remember her mother. She spends a lot of time looking at the screen at the last research log entry her mother made which has nothing to do with research at all. It was clearly meant for Sharla but she can't tell what was said at the end.

Sharla tends to tune out reality around her, and she does it almost exclusively by listening to music. Her taste in music tends to be in simple melodies, playing patterns in a repetitive manner.

Elya and Raini are Sharla's friends from the RAN Naval Academy. While Sharla was placed on the Void Chaser so Kaline could keep watch over her, Elya and Raini were specifically recruited for the Earth mission. They are two of the very few people that Sharla won't ignore...at least won't always ignore.
Elya unintentionally uses Sharla as a wall to speak to about her interests, though she almost never gets a response. Raini talks to Sharla quite a bit, about pretty much everything, but the response is similarly nonexistent. Sharla does occasionally talk to them, but it is almost always about three things. 1) Music. 2) Their jobs on the Void Chaser. and 3) details Sharla finds in her mother's research logs she doesn't understand.

"...So the research log you showed us. I think it's saying that Zilda did something involving Kaline before she died. Did you ask Kaline if she knows anything?"
- Elya
"....."
- Sharla
"I can't tell if that means 'no' or a 'not interested'..."
- Raini

Asha is able to learn languages easily, similar to Raini, so she was able to learn a little Vusin relatively quickly and talk to Sharla. Speaking to Sharla in Vusin is the usual barrier to entry to gaining her trust, though she will speak to you in any language she knows. Unfortunately for Asha, Sharla doesn't have much interest in gaming. Asha tried with other subjects like food, history, astronomy, literally anything. Asha finally got Sharla to talk back to her one day when Asha was humming a song. Sharla wanted Asha to teach it to her. then Sharla finally acknowledged Asha's persistence and the two became friends.

Being a lot shorter than my other character articles, I may expand this one in the future. Since it's already over 2,000 words though, It's more than enough for now!