Cairn Sector    Regalti Race      Regalti
((Unless stated, all images displayed on this world are made by me, Chrispy_0))

The Regalti are a sentient, upright, bipedal species of relatively average size, native to the planet Collena, and Collena's Moon, Sephar. They have since spread out from their home worlds to the stars, and now a majority of their species lives in space.


The Regalti are unique for being a sentient species able to see into the Ultraviolet Spectrum of light (UV), and for being able to involuntarily change their skin color, based on body temperature and emotional state. Their cultures and languages developed first around their association and perceptions of color. They have feathers or a feather-like structure that superficially resembles flight feathers, though did not evolve from birds.


As an advanced civilization, Regalti have discovered fusion technology, have life-extension in the form of uploading their minds to computer systems and robots, and have discovered how to make high-temperature superconductors. Most of their technology is based around mass drivers and magnetism, and most sources of their energy are nuclear in nature, though they do use fossil fuels and wind power under some circumstances.


The Regalti live almost entirely in space. These stellar Regalti make up 99% of the total population.

Overview (as recorded in the Galactic Compendium of Sapient Species 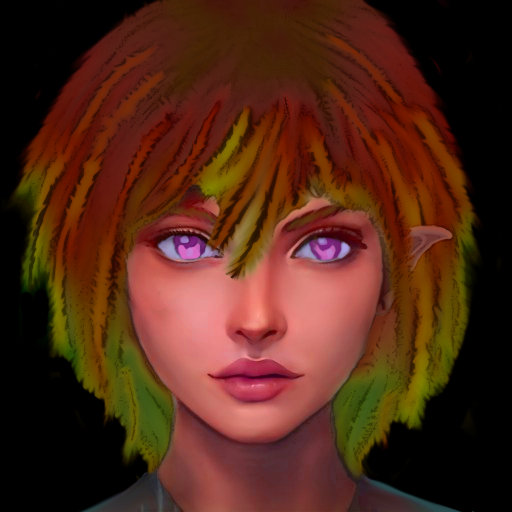 Regalti stand upright and walk on two feet, using their arms and tails for other tasks. Their hands consist of four fingers, two pairs of equal length, and 2 opposable thumbs, one on each side of the hand. Their feet have six toes. They have 2 dorsal limbs or tails that split off from their spinal colum at the top of the back beside the shoulder blades. These tails are fully prehensile, though varying covers of feathers make it difficult for some Regalti to use them to hold objects.


For both sexes, the average Regalti stands at about 1.7m tall with an average mass of 75kg. Their tails are just over 1m in length, though some races can have tails reaching up to 1.5m in length. There is little sexual dimorphism between males and females of this species. Females develop wider hips and there are differences in bone structure. Males are on average slightly taller and heaver, and very rarely grow facial hair. That is about it.


The larger difference between the two sexes becomes more apparant if you can see in the UV spectrum. The Males have more brightly colored feathers than females. Evolutionary relatives of the Regalti still use their brightly colored feathers as the primary method of attracting mates. Even modern females are still attracted to males for the less noticeable brighter colors of their feathers and skin. Females also have patterns of darker spots on their skin, formed from excess melanin while males are almost entirely spot free.
Species is Camera Shy. (Placeholder for a future image showing general anatomy structure of upper body and hands)

Regalti have excellent hearing, and have a hearing range of 50Hz-58KHz. before Regalti evolved and they were tiny aboreal creatures, they mainly hunted even smaller rodents and birds, and the ability to hear the ultrasonic sounds these creatures made aided their success. Regalti hearing does get slightly worse starting at adolescense though, and by adulthood, they can only hear from 55Hz-31KHz, which prevents them from hearing many sounds their former prey makes.

Regalti have an extremely sensitive sense of touch on the tips of their fingers, their lips, and on the ends of their tails. They can detect difference in surfaces only a few molecules thick. Despite the excellent vision capability of this species, they tend to rely on touch just as much in many situations

Regalti don't have the most sensitive sense of smell on their planet, not even close, but being a sentient species, the grace of having a large brain means they have room for developed olifactory senses and processing, which means that they can easily distinguish hundreds of thousands of differents scents from each other, and are able to more easily pick up the scent of plants, especially those with fruits, much more easily than nearly any other animal on their planet.

Regalti have five basic tastes, which in English are sweet, sour, salty, bitter, and umami (savory). Different parts of their tounges feel flavor in different ways. Many Regalti have a particular fondness for certain sweet and sour tastes, which can sometimes send them into a state of lightheaded euphoria. Other Regalti though, never experience this.

Regalti Visible spectrum by Chrispy_0
This image is a representation of how Regalti see color. They can see wavelengths that are anywhere from 275 to 725nm, but on average can see 300nm to 700nm. This allows them to see into the UV spectrum of light. Biologically speaking, Regalti have 4 pigment cones in their eyes. A Red cone centered at 560nm, a Yellow cone centered at 545nm, a Cyan cone centered at 475nm, and a Violet cone centered at 380nm. They also have rod cells that are centered at 500nm. The violet cone is sensitive to ultraviolet light down to 300nm, which is when Regalti see something reflecting or absorbing a lot of UV light, it appears slightly purple.

The red, yellow, and violet cones are close to a comparable Vusinor or Human's red, green, and blue cones, but as they are positioned differently, this causes all three races to percieve colors much differently from each other. To humans for example, yellow and green are the brightest colors. To a Regalti, Cyan and Far-Violet are the brightest colors. Far-violet sits just outside the spectrum of human vision, and appears black to them.

About the color of Regalti eyes, the iris is actually pigmented light brown, but the structure of the iris will scatter certain wavelengths of light, making them appear green and blue, similar to how the colors of their feathers change. Additional scattering can make some Regalti eyes more violet, even glow under uv light. The cornea appears slightly blue or violet to most Regalti, but to anyone else, appears white instead.

Regalti have two different types of feathers on their body. They have Vaned Feathers and Down Feathers.


On the top of their head, the vaned feathers are composed of a long thin shaft 0.5 to 2mm thick, small but still many times as thick as an average human hair. They have many thinner filaments (or barbs) about the thickness of a human hair that form the vane of the feather. These feathers continuously grow throughout a Regalti's life, and will regrow if pulled out. They can potentially grow to a great length, but generally never reach more than 0.5m in length. Very rarely, these feathers can also grow on the face, the tips of the tails, and around the elbows and knees. The total width of these feathers is between 0.5-1cm and from a distance might appear to be hair and not feathers, but up close it is quite noticeable.


Under these vaned feathers are a much finer down type of feather that is composed of multiple filaments, sometimes called a plumulaceous feather. Except for the top of the head, these feathers are generally small and fine enough to not even be noticeable, even in the UV spectrum. These feathers can be found anywhere on the body, but has some concentration under the arms and between the legs. The tails are usually completely covered with these feathers.

The colors of a Regalti's feathers is hereditary and can be inherited from either parent. The primary color of Regalti feathers is usually red or green, but can also be brown, yellow, and violet. Due to structural iridescence, the color can change depending on the angle, and is usually blue or green.
Also, Regalti feathers will Flouresce when exposed to light. This flourescence is partially visible to human eyes, but to Regalti perception, it causes the tips of their hair to glow in bright, bold colors, usually offset slightly to a shorter wavelength from whatever the primary color is (so red feathers will flouresce orange. Green feathers will flouresce cyan). This flourescence will override structural irridescence, making the tips of feathers (or the entire feather in very bright light) appear a different color.

Regalti skin functions in a unique way and is able to change color based on a number of factors. It is a complicated system with at least three different determiners of skin color.


The epidermal section of skin forms the outer protection and has a pigment layer among several translucent layers. This brownish pigments are caused by melanin. These levels are increased by genetics or exposure to the sun and appear lighter or darker depending on the level of melanin.


The top layer of the dermal layer of skin is composed of tiny guanine nanocrystals organized into a cubical pattern with capillaries running between them. Normally they reflect yellow light the most and other wavelengths less so. Combined the red color of the blood and the upper pigment layer of skin, this makes Regalti skin generally appear as a brown to orange to rosy red color.


The mechanism that causes the skin to change into a number of different colors is related to the expansion and contraction of blood vessels, which causes the nano crystals to spread apart or condense closer together, reflecting longer and shorter wavelengths of light. Electrical signals from pain and emotions as well as heat and cold can also affect the shape of the nanocrystals which will cause them to reflect or absorb UV light, which will make Regalti appear different to each other.
Some Regalti lose the ability to change their skin color. This condition occurs when the nanocrystals either fail to grow or are dissolved due to being poisoned. These Regalti are called Colorless. While they can't turn red, green, blue, and violet anymore, their natural base skin color still has a wide range of tones depending on their ethnicity and exposure to their sun, ranging from rosy pink to tan to yellow to dark brown. 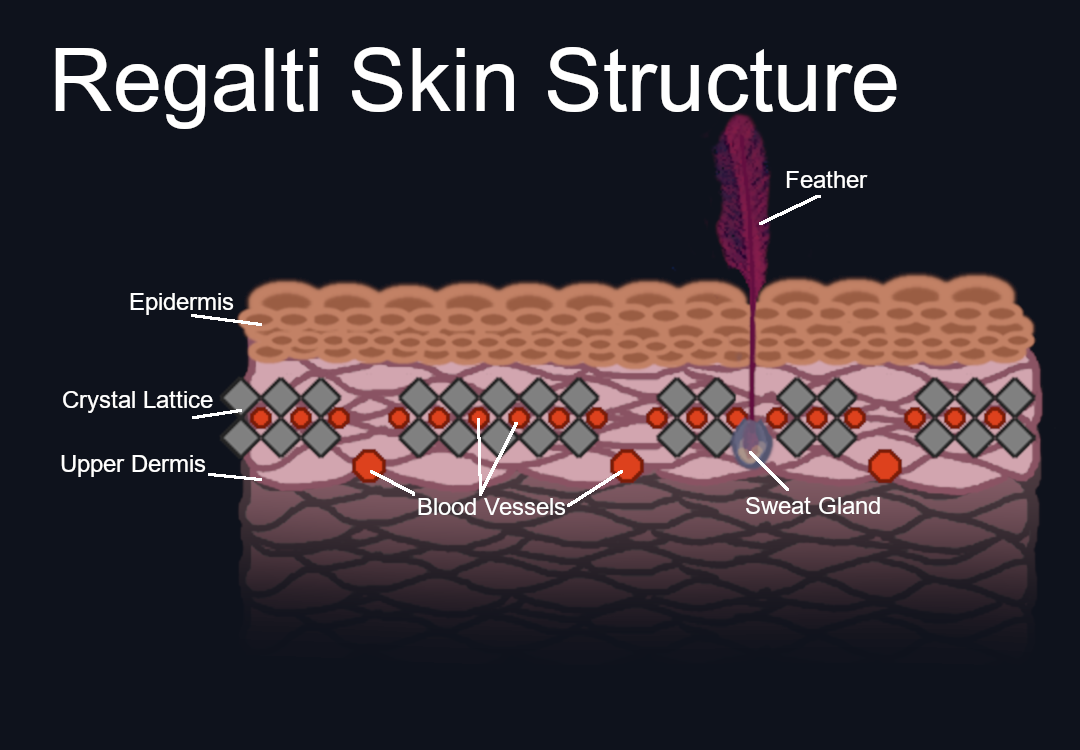 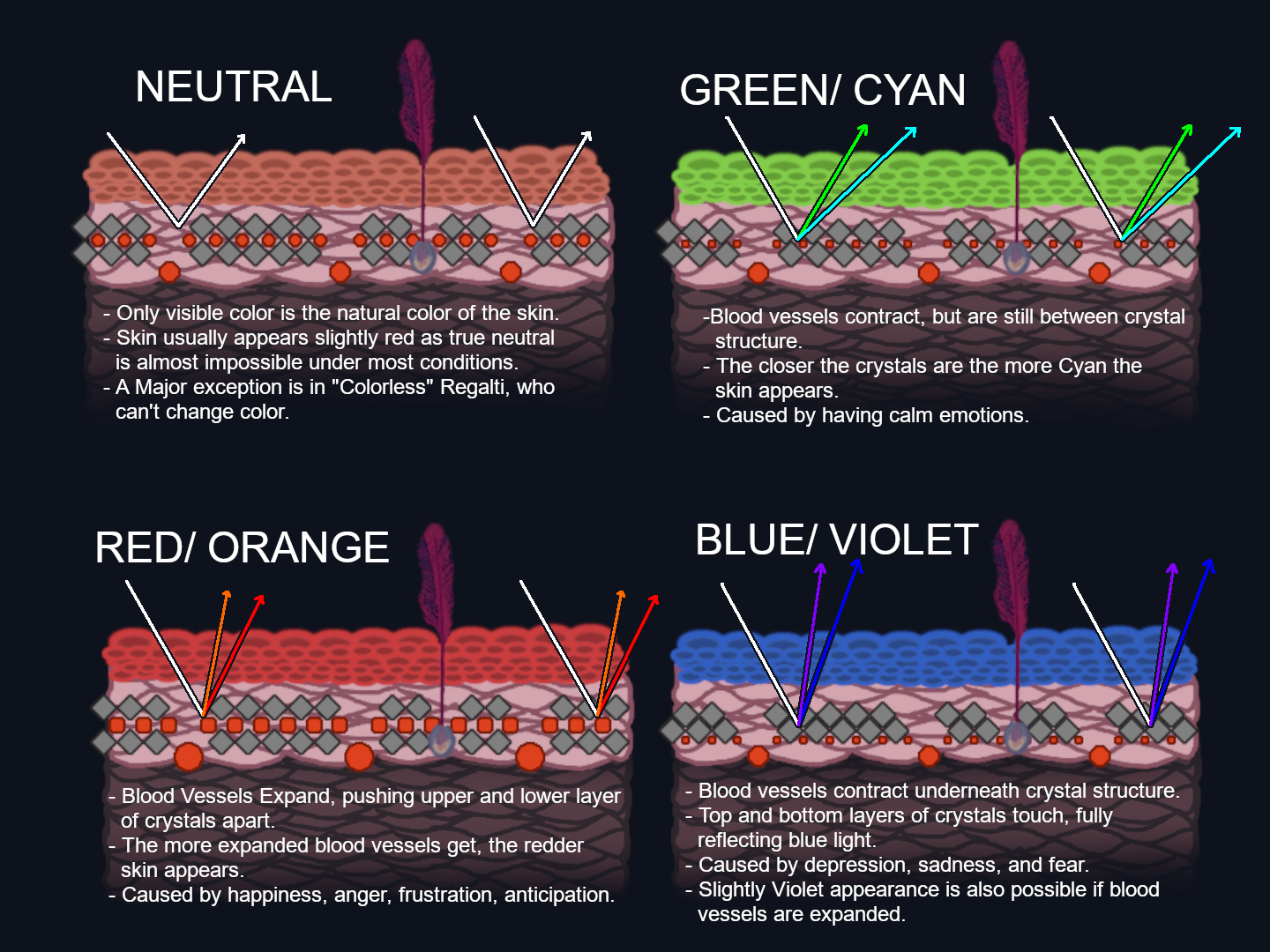 (Gonna stop here for now...Rest of article are headers to fill in for the future)

12/10/2021: Updated the look of the Overview Section to be more in line with a future article. Appearance should be cleaner now and not have the error of the sections running into each other.

5/2/2022: Updated the skin structure section, added the art I created for the Colorless article and rewording the section so both articles read similarly. Also updated the portrait in the Overview Section to look more like the new style I made for my Regalti portraits.
Please Login in order to comment!

Super cool. Can't wait to see what your species looks like. I really like all of the details within the appearance like the color ranges. It's also an interesting and unique concept for a space-faring species. Great work here!