Money in the Cairn Sector

While some Places in the Cairn Sector (mostly on Planet Collena) still have physical currencies, nearly all monetary transactions are now handled by a money card with two chips in them, and a biometric fingerprint reader. The following information is more specific to the The Delvi Star System rather than the whole Cairn Sector, but the money cards are the same general design no matter where you are in the Cairn Sector, or the rest of the Galaxy.

We're going to use the card owned by Elya Sarai as our example here...

The Card can have any design the user wishes when they have it made. In Elya's case, she chose an image of Eshani, a minor goddess of luck in fevarik religion, in a super cute style that many younger Regalti like. The goddess is holding an Esha coin, the minted coin of the nation of Vefaria.

This barcode has the identification of the card user that can be read by a Galactic scanner. In this case, it says "Elya Sarai, Del". It doesn't have the user's account number or any other identifying information, only their name and an abbreviation of the star system they came from

3. Name of Cardholder, in Native Language

In this case, it says "Elya Sarai", and is in her native Vevari Script. Vevari is generally written top to bottom, but here, it can easily be read left to right. These money cards can use any of millions of languages in the Galactic Database to generate the name. 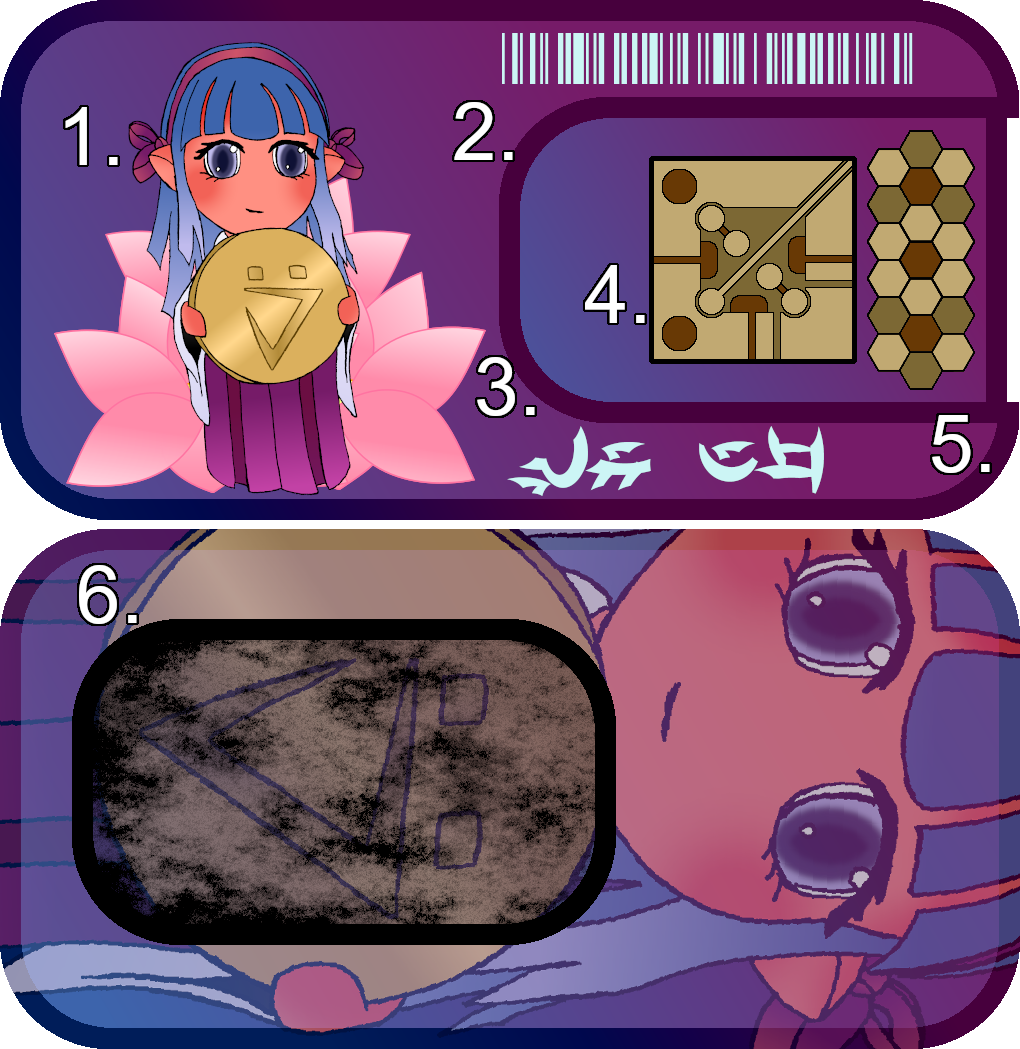 This Chip interfaces with the Delvi Alliance Blockchain, as well as the Central Bank of whatever nation the user is from. All currency types between the nation level and the Delvi Alliance are automatically converted with each transaction and are generally done without a fee. This way you can buy an item anywhere in the Delvi system without having to worry about not having the proper currency. This chip is necessary at the system level and every star system in the galaxy has a different chip design.

This Chip is standardized across the ENTIRE Galaxy. The system will first contact the Galaxy's Blockchain, then it will interface with whatever system the user is from, converting currencies automatically and without a fee. This way, you can buy items anywhere in the galaxy with the exact same money card without having to worry about not having the proper currency.

Another feature standard across the entire Galaxy, this scanner is usually for fingerprints, but also works for whatever soft appendage the species happens to want to use. To use it if you are a Regalti (or human), you must slot the card into a card reader, then keep your thumb on the biometric scanner for about two seconds.

No account numbers or passwords are required to be remembered or any of that, your biosignature is your account number and password. The specific biotech the Galaxy uses in these bioscanners is extremely sensitive and extremely difficult to counterfeit, and even if one is made, the Galaxy's monitoring systems will know if a person isn't in the right place when their card is used. Since their latest version was made around ten thousand years ago, there hasn't been one successful counterfeit transaction made.

The Delvi Alliance has a Central Bank of sorts, which has an account number for every single living Regalti, as well as accounts for other species like Maorian and Vusinor that frequently visit or live in the star system. Their digital currency is blockchain based, but it is also tied to the value of physical gold. One DSC (or Delvi System Credit) is always worth the cost of 1 milligram of Gold, and they have enough gold stored away to issue roughly 100 septillion DSC. Mining and production of gold is regulated across the galaxy, and it is rare enough that the price has been relatively stable since the currency's adoption around 400 years ago. 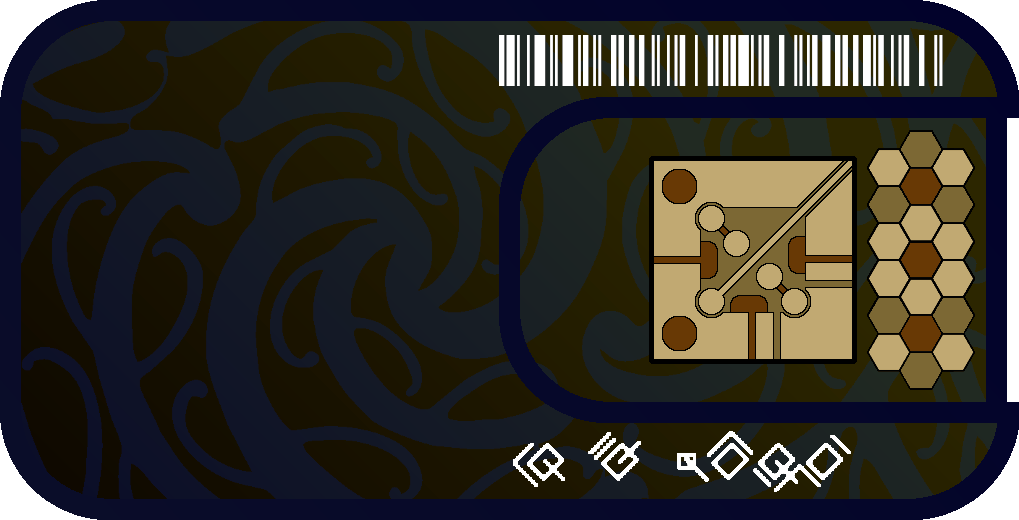 No one ever actually owns a GSC (Galactic Standard Credit), they own the currency of the star system they came from. A GSC is just a standardized way to convert currencies between the tens of thousands of different currencies across every star system under the influence of The Galactic Council. This way, anyone from any star system can buy anything from any other star system.
It is blockchain based, and it has its value tied to a physical commodity. Rather conveniently for some nations that tie the value of their currency to Silver, such as the Vefarian Esha, it is easy to convert currencies between them and the Galactic Standard, which ties its price to the value of Silver. 1 GSC equals the value of 1 Gram of Silver.
Since the entire Galaxy trades freely, the values of several commodities in the Galaxy are listed in Galactic Credits. For example, 1 Gram of Gold is currently worth 83.33 GSC. While the values of all other commodities shift a little over time, the value of 1 gram of silver will always equal 1 GSC.

The Nation of Vefaria has always had their own physical currency separate from the digital version that now dominates society. It is called the Esha, and is named after Eshani, Goddess of Luck. This Currency is backed by the price of silver. One Esha Coin is always equal to the cost of 1 gram of Silver. 1 Esha can be divided into 144 Ishas. Coins don't see much use in Regalti society anymore, and Vefaria stopped minting new ones on an annual basis centuries ago. They still mint coins, but only every decade.
The only real use for them now is to use them for offerings at one of the nation's many, many shrines and temples. While most of them have a card scanner to make donations with, all of them still have a physical donation box to place coins. The coins are also used as physical gifts for younger Regalti, and there are collectors always looking for rare coins. It is very rare that you would find a place that doesn't accept digital currency, but considering how old and disconnected some places on Collena are, experienced travelers aren't really surprised at this, but many younger tourists are caught completely off guard.

Eshani is the daughter of Sevi- Goddess of the Moon. Eshani is a trickster of sorts, and will take pleasure in making your life miserable if you ignore her for too long. To stop her, all you have to do is toss a single coin into a body of water and say her name. If she accepts the offering, she will protect you from evil spirits and bring you good luck for one day. Tossing more coins doesn't actually give you more luck, so don't try. You might even make her angry for throwing away your wealth like that! 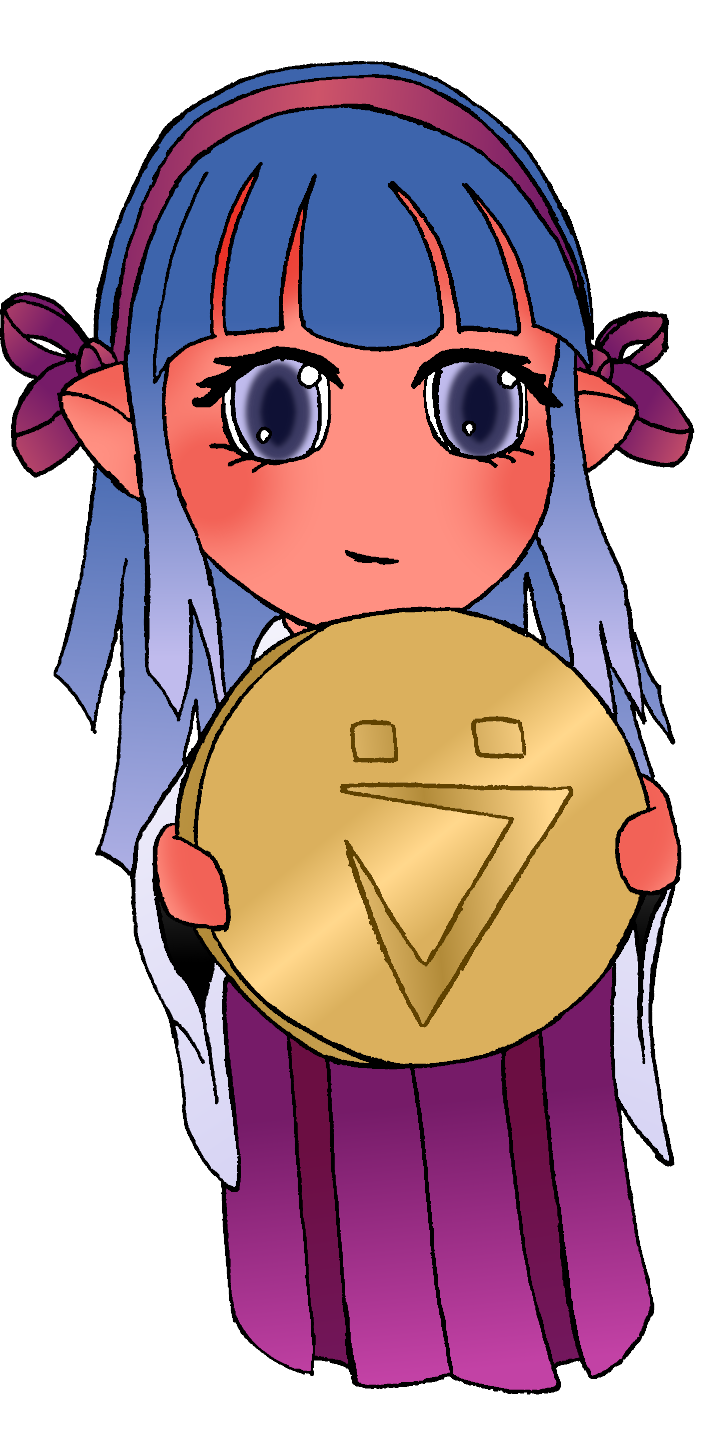 While currency is generally all digital now, most of the Galaxy is against tying the price of their currency to the supply of the coins or to a value that can't be directly measured. Because of this, the price of currencies is generally tied to the price of a physical commodity. As stated elsewhere, 1 GSC (Galactic Credit) is worth 1 Esha, and both are the value of 1 Gram of Silver. 1 DSC (Delvi Credit) is the value of 1 Milligram of Gold. As of this writing, the value of a Milligram of Gold is equal to 0.0834 grams of Silver. 12 Milligrams of Gold = 1 Gram of Silver, at least as far as galactic matters are concerned.

Before the Charter of Worlds was signed in the year 25 Before Exodus, Each nation in the The Delvi Star System had their own system of currency, and the move to adopt the Galactic Standard Currency hadn't been put in place yet. Most nations on Planet Collena had entirely different currency standards while most Stellar Regalti out in space had all moved to various different state-backed blockchains, most of which weren't even tradeable on the same networks, requiring the use of third party services that charged various fees to do the transaction. The planets Sephar and Senon also had their own methods for dealing with money. It was a mess.
One of the sections in the Charter of Worlds treaty was the establishment of a single system-wide digital currency that was tradable anywhere in the star system. The Currency was to be controlled by the Delvi Alliance, the central authority in the system now, and it also enforced the adoption of Galactic Standard Credits as a secondary means of converting currencies. Many nations held onto their own currencies, so that they could simply print more money when they needed it. This wouldn't do much other than devalue their own currency after a time, compared to the value of the Delvi Standard or Galactic Standard credits that barely change.

Upon arriving in the Delvi System, Elya and Raini took biometric scans of each of the humans. Uul used his connections and had an account opened for each of them, issuing them their own money card. They each got 100,000 Delvi Standard Credits put into their accounts, which would be worth about 5,839 US dollars going off the raw gold value on Earth. The humans were abducted against their wills, but they aren't treated badly. They are given money and some freedom, as long as they go where they are told, otherwise the plan is never going to work...
One final note is that Sul opened the human's accounts listing them as Regalti, since humans still don't exist in the Galactic Record yet. The Barcode however, lists their star system of origin with the abbreviation of 'Sol', indicating that they are from the Solar System. He also used Latin Script, which oddly did exist in the Galaxy's Database. 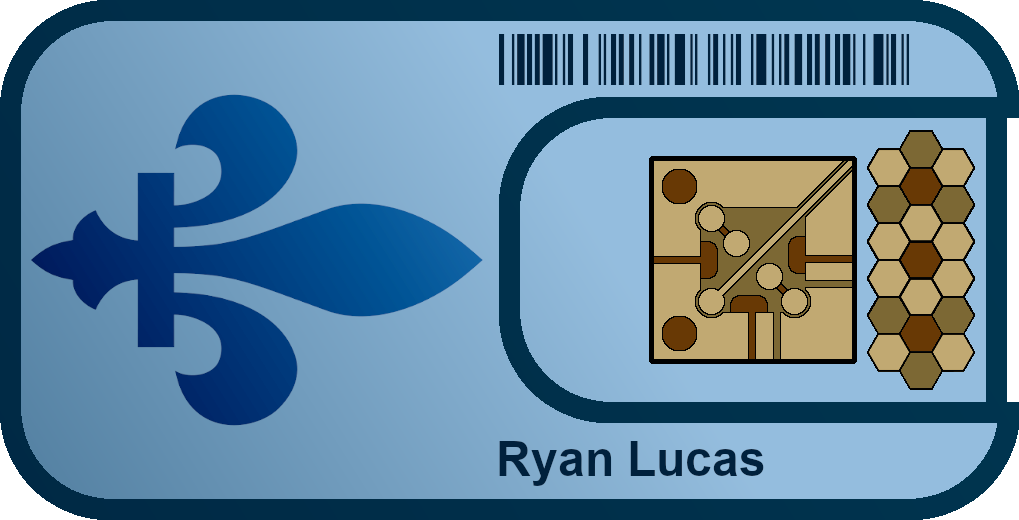 If you liked the article, leave a like or follow. If you didn't like it, then Please leave a comment explaining why so I can address the issue and improve my ability as a writer.

I am not sure if I have misunderstood the currency conversion box but in it the Delvi Credit appear several times with different values. Is that wanted? If so I must have misunderstood its function and I would like some explanation, when you have time...

Yeah, I should've given the conversions its own section to explain it better. Instead, I shoved it in a empty spot without much thought. Sorry about that. I'll update the article in the next day or two so it's explained better. But to explain it now...

Now I get it... Thanks for taking time to explain! Nice work!

Cool article, I also made currency system for WE and enjoyed comparing these. Like the detail.