Cairn Sector    People      Kaline Serna
((Unless specifically stated, All images on this world are by me, Chrispy_0.))

Kaline Serna is a Regalti from Barun Deth, the capital city of Vefaria. She is the current senior Pilot of the Starship Void Chaser, and has been flying on that ship on various missions for about 25 Ryears, more than half her life. She is also a master of flying the Fighter craft attached to the Void Chaser, and dozens of other vehicles. Her ability to fly these ships is extremely impressive, considering her body is incompatible with Regalti Cybernetics and she can't interface with these ships directly. In her free time, she is normally reading the physical books or magazines on several different subjects, or looking through the physical blueprints of the void Chaser and other ships.

Kaline is a warm and caring person, and has a tendency to act motherly towards younger members of the crew whether they like it or not. She is very hard to anger (Trust me, even the master button pusher Juan has tried and failed....). Kaline will always listen to your issues and she is a great person to approach with just about any problem. If there is a negative to Kaline's personality, she is very good at hiding it.

Not a whole lot is know about Kaline's early life. She was born in the year 353 After Exodus. Barun-Deth is not an empty city compared to others of the continent, but other than government business, religion, and tourism, there isn't much there. Kaline always wanted to see the stars and become a pilot, but it was a difficult road for her.
When most Regalti are 5 Ryears old (or about 7 Eyears), they get injected with the necessary cybernetic enhancements to be able to read virtual signs and interface with a majority of Regalti tech. Kaline's body was incompatible with it, as her immune system would attempt to attack the graphene shell of the microscale machines. For most Regalti this would lock them out of their dreams forever and keep them at a disadvantage if it involved certain jobs, and piloting ships was one of those.
Kaline stayed on course, and when she was 12 (16 Eyears), she traveled to Argen the Silver City. Her intention was to join the RAN and fly starships across the Delvi System. During the day long train ride to Argen, Kaline met a woman named Zilda Marn. Zilda was actually from Barun-Deth, but mainly kept to the Vusinor side of town. The conversation was mostly uneventful, but Zilda was rather impressed with the girl's eagerness. She passed a recommendation to the Void Chaser's Captain, Uul. Two years later, Kaline reported to Captain Sul and was the new junior pilot of the Void Chaser.

Despite Kaline's inability to mentally interface with the ship's systems, she quickly became a master at piloting it. She could fly the Void Chaser between obstacles and fly in combat situations that most other pilots could only dream of doing. When not flying missions for Sul, she flew ships for the Regalti Allied Navy, and flew successful missions on ships ranging from tiny fighters, to massive Carriers.
Kaline got romantically involved with a fellow pilot, Yrasken around when they were 19. Their relationship was constantly strained as they were piloting different ships and it ended after about five years with no formal marriage. They did have a son, AiKeren, who is now about 22R years old. Kaline and Yrasken saw each other a few times in the years since then, but both have moved on with their lives.
While Kaline isn't as active of a pilot anymore, she still flies all Void Chaser missions and still gets paid by the RAN. When she isn't flying missions for Sul, she stays at her home in Barun-Deth, occasionally helping her brother and her nieces maintain the Shrine of the Forest Dog, which has been in the care of the Serna family for almost a thousand years.
Kaline is known to cook large batches of Jinani Renreda to take on the Void Chaser missions. It's unfortunate that Maorians can't taste spicy foods, because the Regalti and Vusinor love her cooking. 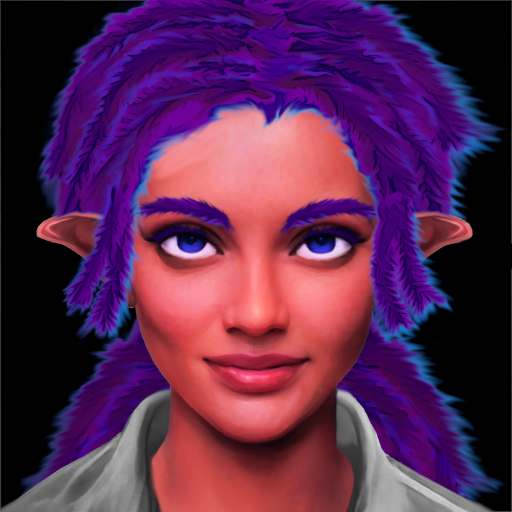 Zilda Marn is a positively ancient Vusinor that has lived for many thousands of years, jumping between clone bodies when her current body gets too old (it's a unique feature of the Vusinor Species, the ability to grow perfect clones of themselves...). When Zilda died about 8 years ago, she curiously requested that her mind not be uploaded into Shara Anri, which was to be her replacement body. Shara was only 12 at the time, and was placed under the care of Kaline.
Even long before this, Shara called Kaline Anvi (Aunt) and continued calling her that. Kaline did her best to raise Shara, despite being completely different alien species, but she was the one that convinced Zilda to give being a parent a try, instead of growing a clone body solely for the purpose of wiping their mind and taking over when their old body died.