Called Jinani by the Regalti, Birds on Collena are flightless and have four legs. Their "Wings" are nothing more than atrophied limbs on their backs, or don't exist at all. Millions of years ago, flying Jinani resembled griffons from mythologies on Earth, and many myths on the Regalti homeworld of Collena also heavily feature the creatures, inspired by numerous skeleton fossils. Jinani lost their ability to fly, and since then have evolved to fill numerous ecological roles, from the giant but gentle Sea Crawlers to the tiny and skittish Mouse Finches.

As all Tetrapods (four legged animals) on Collena have an extra set of limbs in the upper dorsal areas of their back, so do birds. This set of limbs evolved into what many understand to be wings. Most tetrapods on Collena also have feathers of some variety, but only birds evolved stiff feathers that allowed for flight.
Around a hundred million years ago, a series of volcanic eruptions on Collena caused an ice age, causing a mass extinction event. Large reptiles similar to Earth's dinosaurs went extinct during this time, and birds had evolved from one of the branches of these creatures.
Birds were able to survive the mass extinction event because they were able to fly away from the worst areas at the time, but as they diversified, most of them lost their wings. Mammals were confined to a single continent in these times, while birds had free reign over the rest of the world. This allowed birds to quickly diversify into a wide variety of creature, filling every ecological role they possibly could. 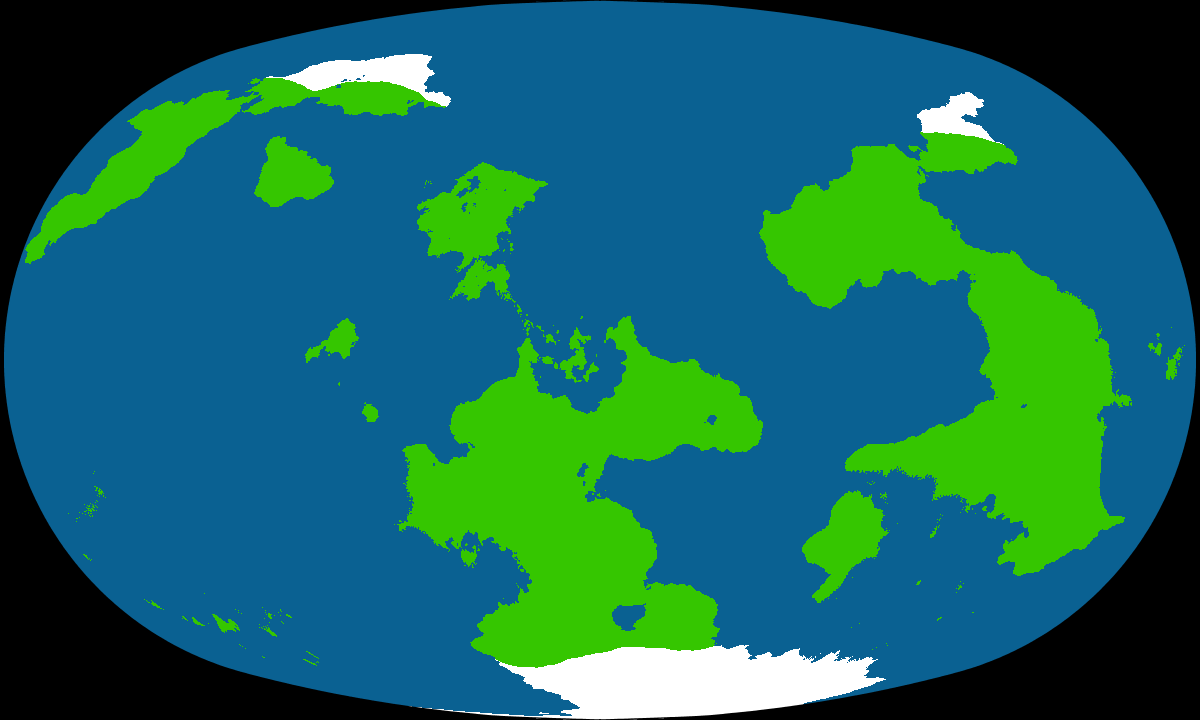 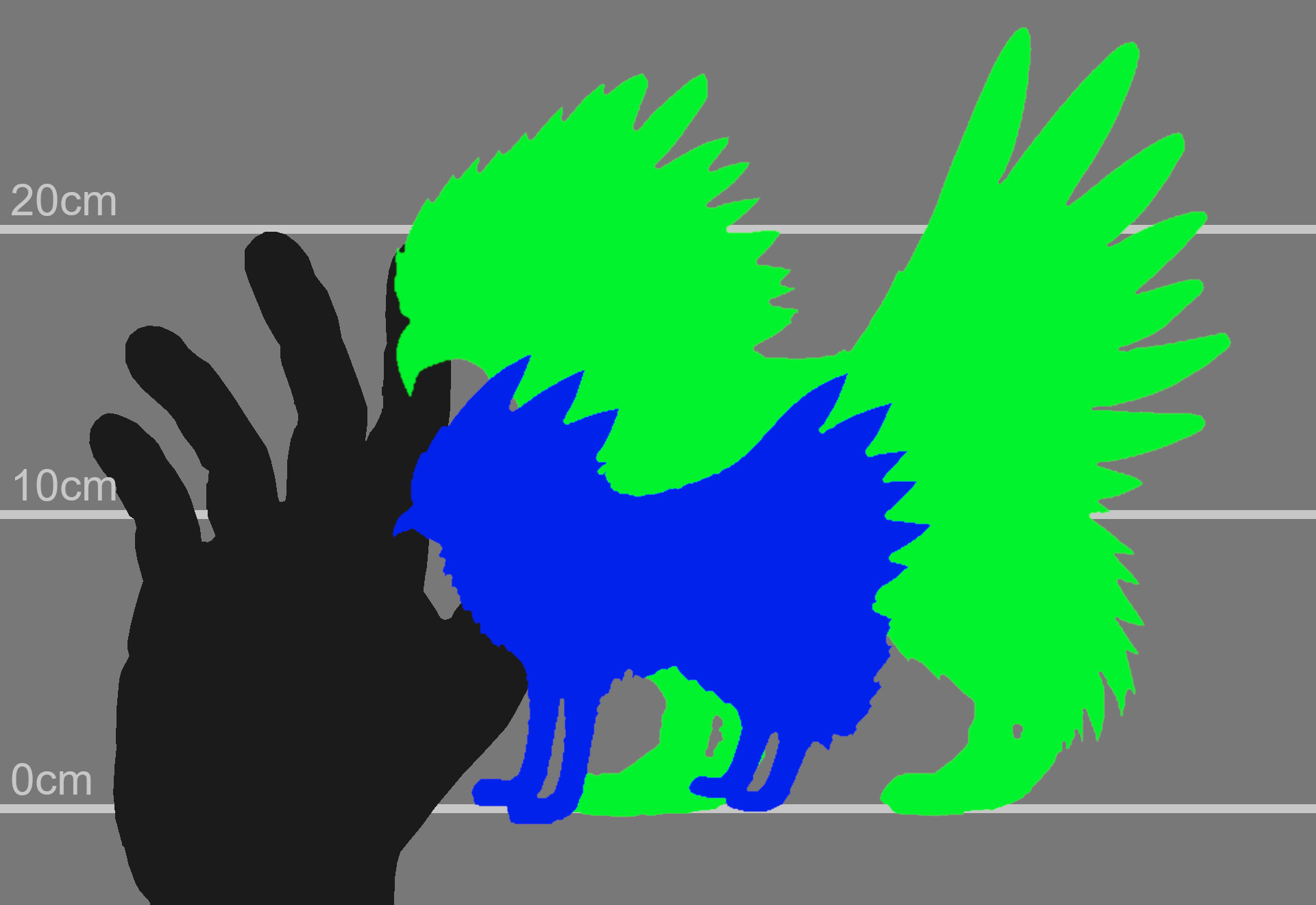 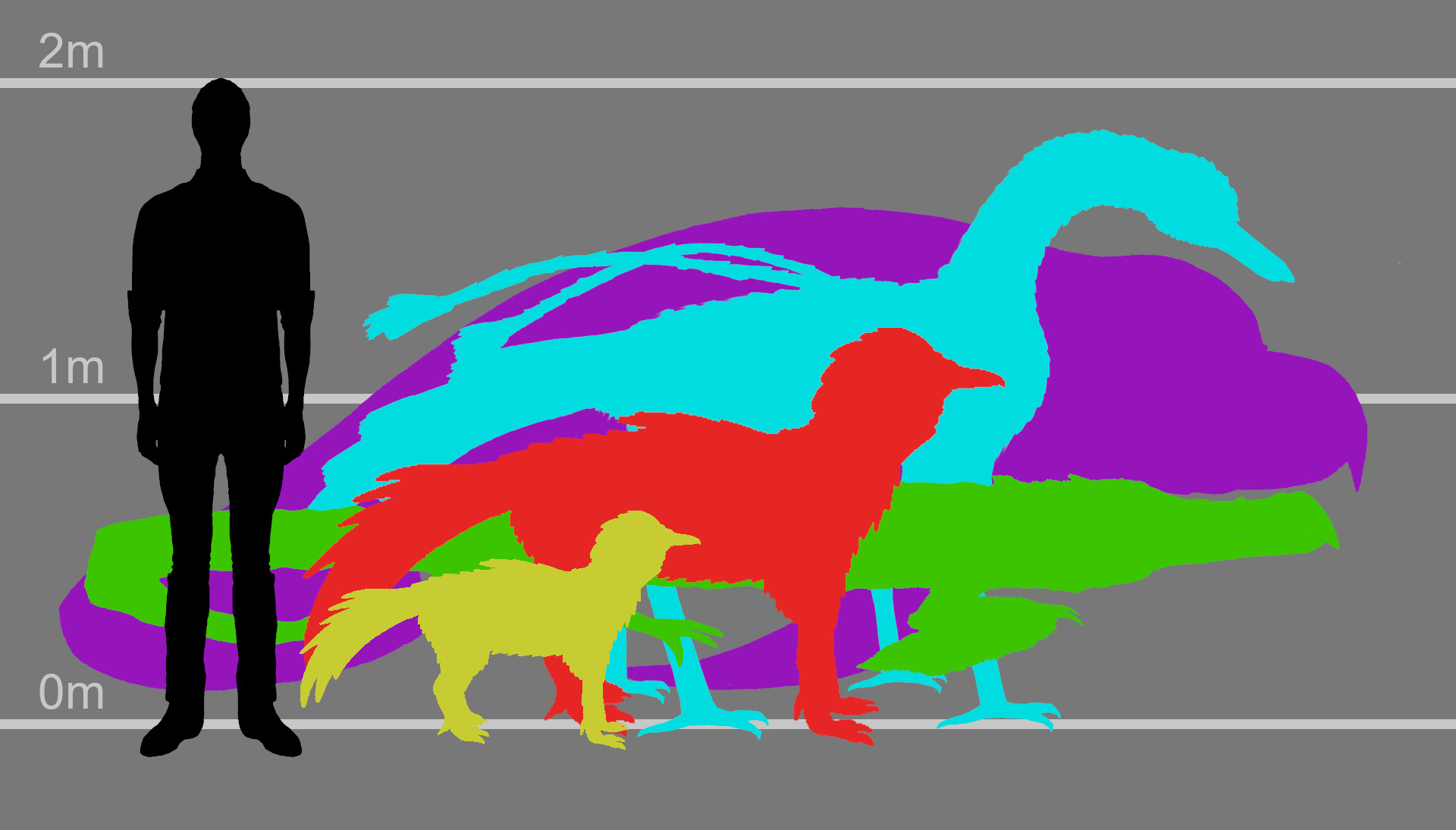 Riyanni loosely translates to "Tiny Birds". Rarely measuring more than 10 centimeters tall at the shoulder, they are the smallest family of birds on Collena. Some varieties are even smaller, standing as little as 4 centimeters at the shoulder.
when humans saw them, they gave the name "Mouse Finches" to describe them. As their english name implies, mouse finches have similar behaviors as both of these small animals. They are skittish, always on the lookout for predators, and food. Similar to mouses and finches, their primary sources of food are seeds, though they sometimes eat smaller animals. 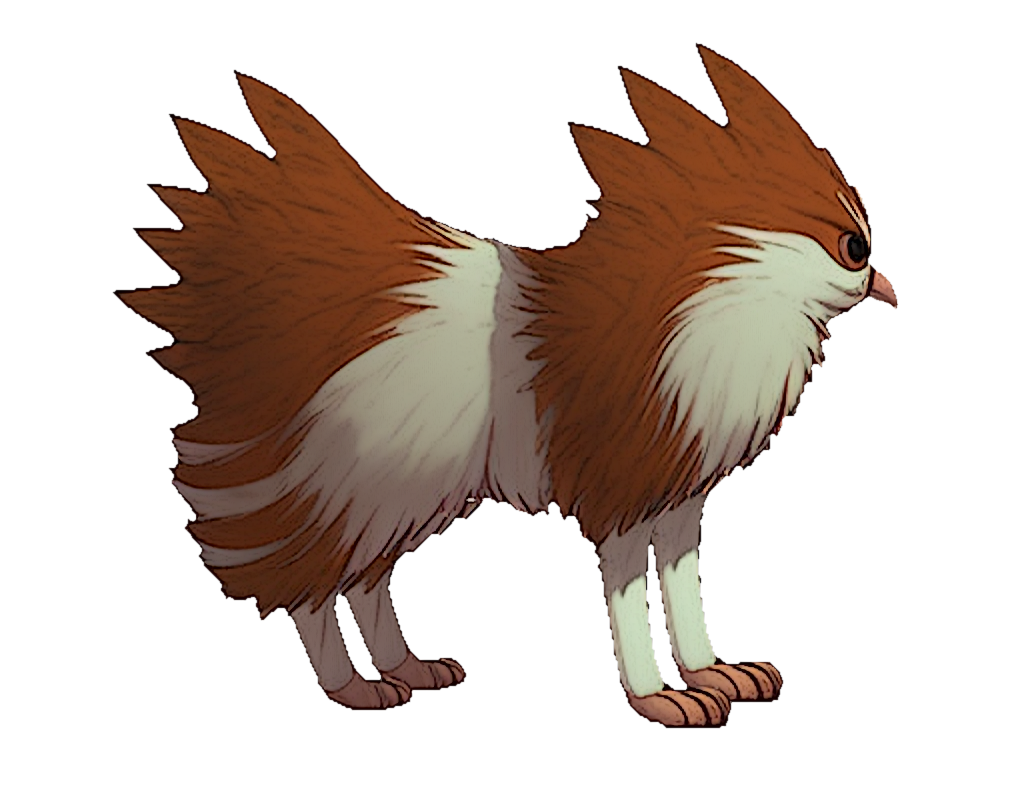 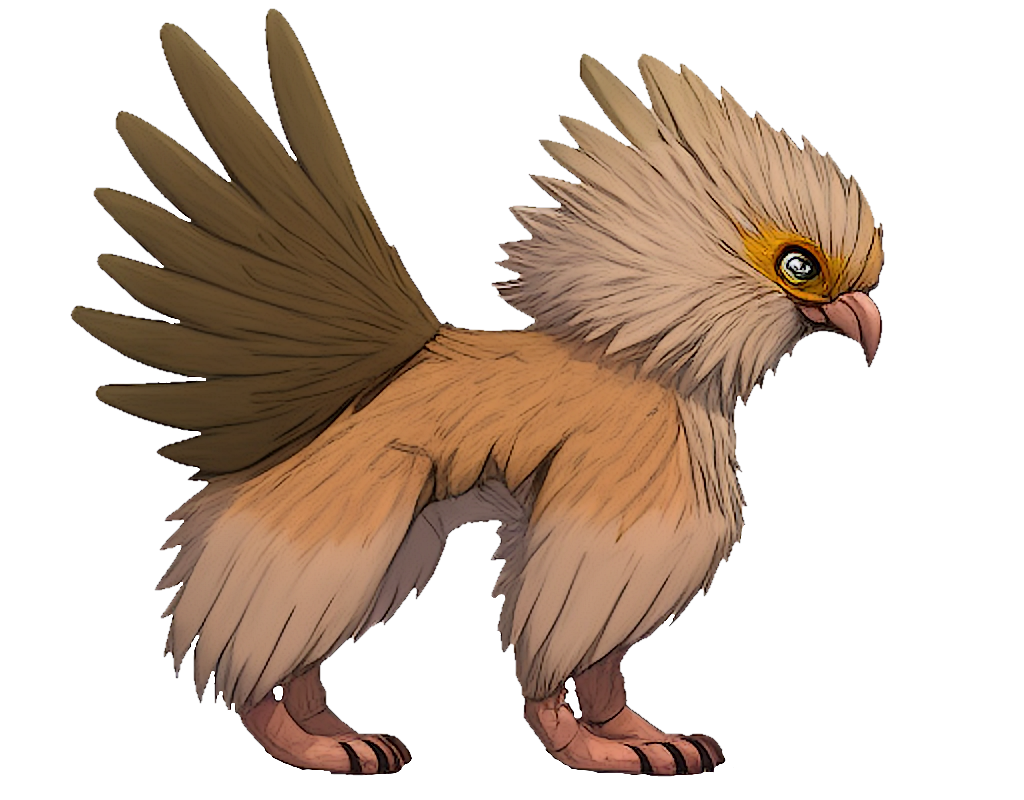 Shoryi, or "Gnashers" are a small family of birds, with most standing around 15 centimeters at the shoulder. Some are larger. Their fluffy feathers hides just how slender their bodies actually are. They are very active, very quick, very vicious, and almost entirely survive on hunting small animals.
Many Shoryi have a habbit of communicating with each other by clicking their beaks and sometimes making a grinding sound with them. This immediately scares their prey who take off running, often right into the hungry mouth of a waiting Shoryi. For this reason when humans saw them, the translated name of "Gnasher" was perfect as it was.

Galin are medium sized family of birds with long, flexible torsos with well developed claws and a beak evolved for tearing at the flesh of small animals as easily as crushing seeds. They can best be described as ambush predators, hiding in tall grasses or on branches waiting for the perfect moment to strike.
When humans saw the smaller varieties of these birds, they decided to call them "Chicken Cats" because their face very much reminds them of a chicken, but they mostly look and act like cats. 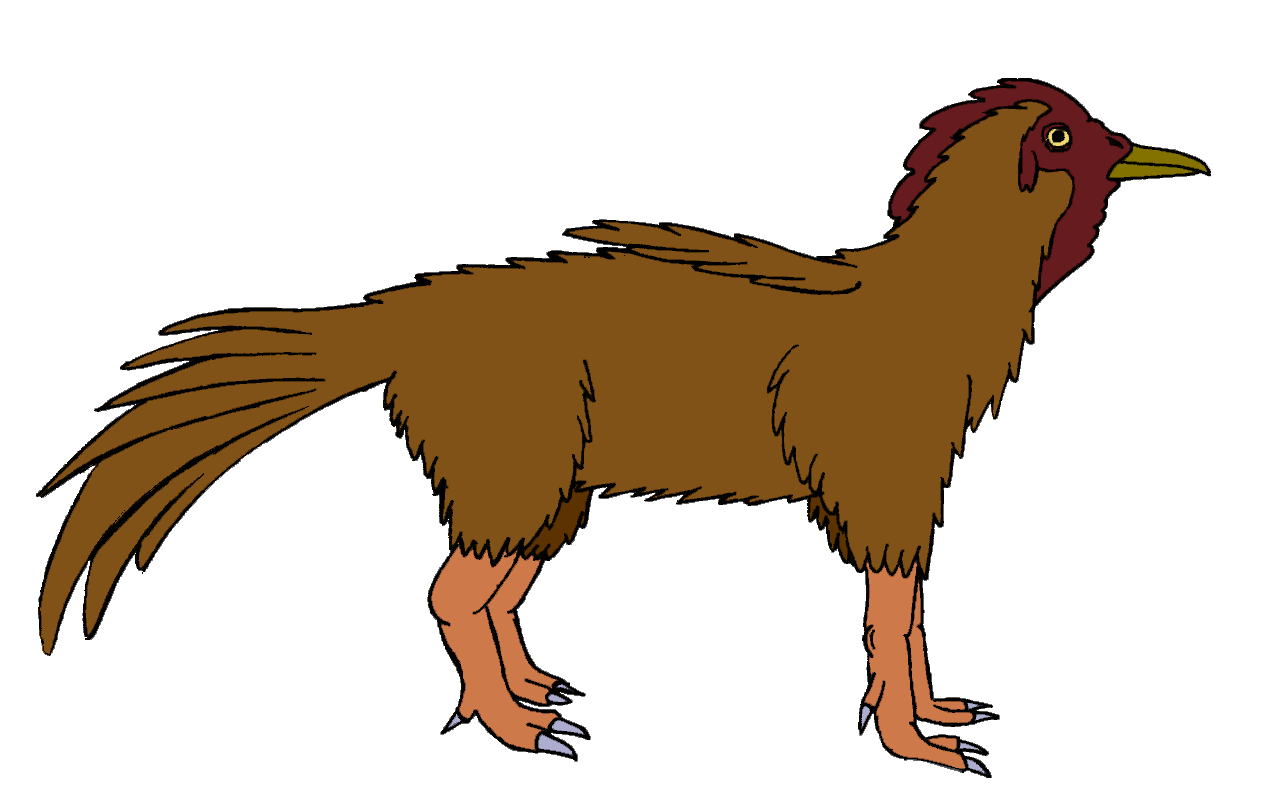 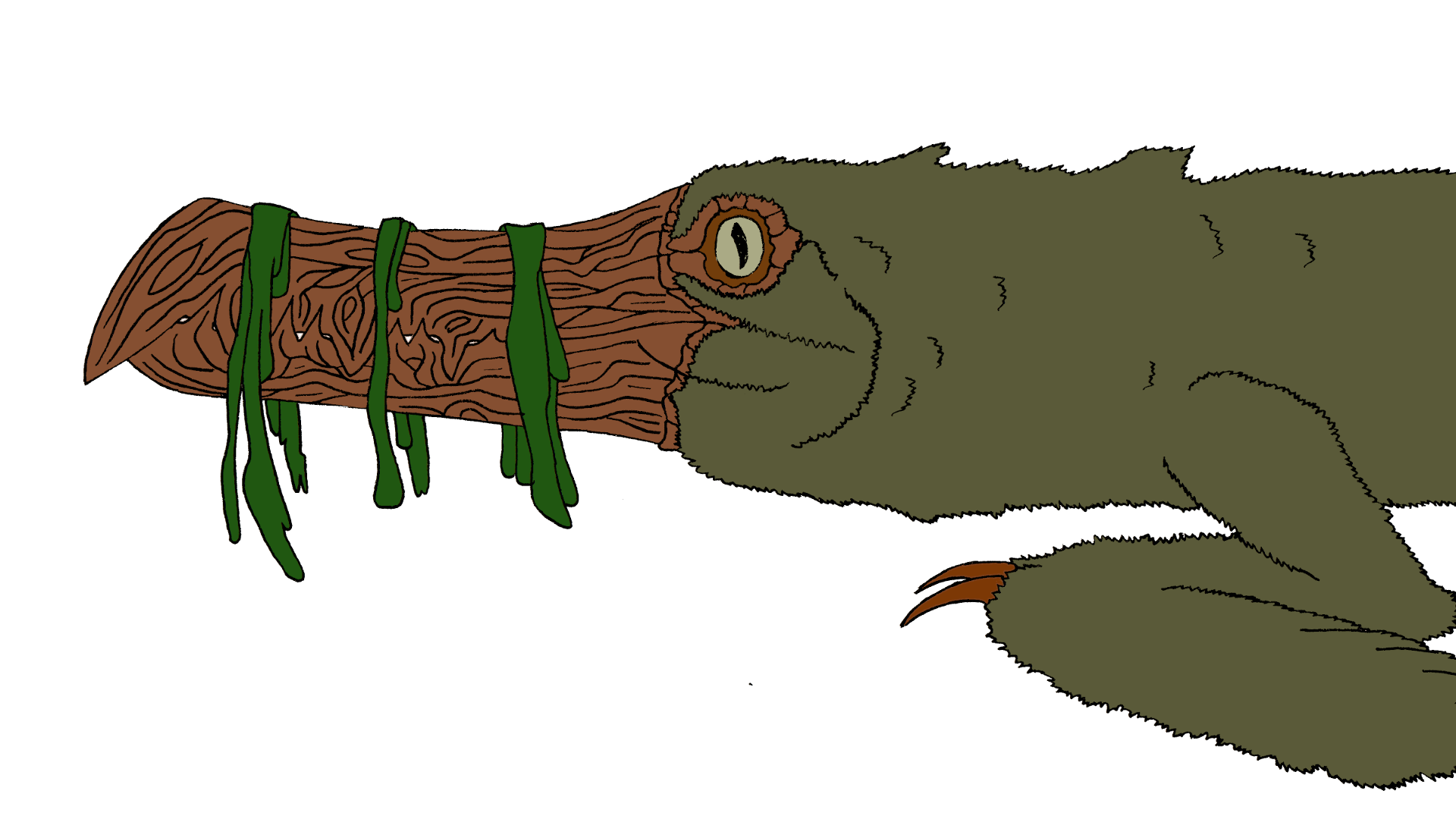 Stillbirds wait at the shoreline or in the water with their large beaks open, staying motionless for hours, waiting for the perfect time to snap their jaws around whatever accidentally stepped in them. Some varieties of this family of birds are active hunters instead, swimming through Collena's waterways, catching fish.
All Stillbirds have breaks with a woody texture pattern on them, making it hard to tell the exact shape and placement of the mouth. To a human these animals look most like a crocodile or alligator on Earth.

Ikandi are large herding birds, standing over a meter at the shoulder, with some standing much taller. Their diet consists primarily of seeds and plants. They are a similar to ruminant animals on earth and have a specialized stomach for fermenting low nutrient foods.
The tails on their backs are all that remains of once large and impressive wings, but this was also millions of years ago when the animal was significantly smaller. Now the tails are used as a way to signal other animals in the herd of impending danger, as well as in courtship rituals. 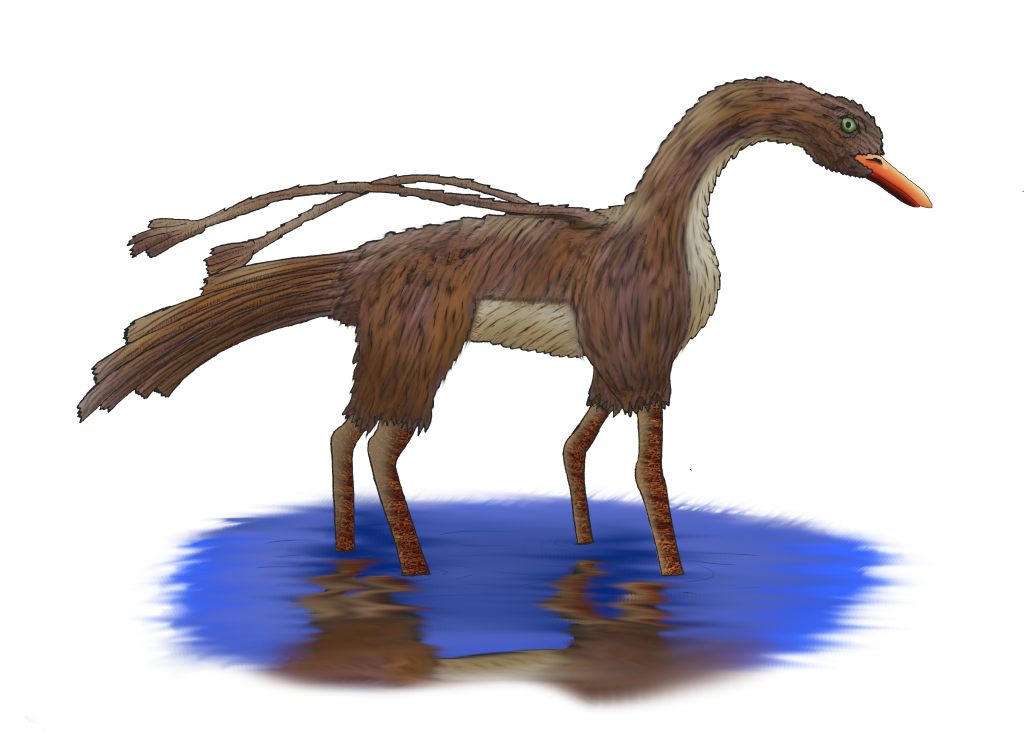 Sea Crawlers are large, fat creatures that float in the water, eating seaweed, urchins, and coral with their large beaks. That is mostly all they do. They are fully aquatic animals and sleep just under the surface of the water.
While their beak is large and they could easily crush a person with them or even rip off limbs, they are actually quite gentle creatures.

In the past, the planet Collena was host to a number of flying birds, many of this had a similar appearance to griffins from mythology, others had multiple sets of wings. Nearly all of them are extinct.
what we are left with in modern times is the Yorikandi, a Sky Bird, and the Lekanni, or Void Bird. These birds are quite small, standing no more than 30 centimeters tall at the shoulder. Compared to virtually all other birds on Collena, they have well developed flight feathers. With their wings they can fly/glide for hours on end without ever getting tired. when on the ground, they keep their wings folded up on their backs and try to keep their feathers fanned out as much as possible to make themselves look as large as possible.
These animals are called "Griffins" by humans. 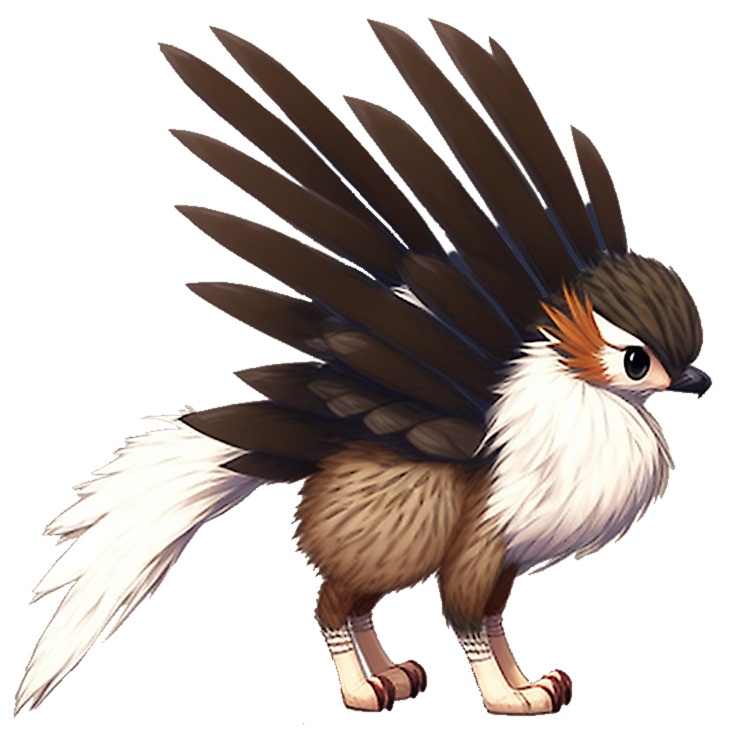 Feathers in creatures on the planet Collena all have a similar structure, with a central shaft and barbs coming off of this shaft. Their feathers can be split broadly into two types: Vaned Feathers and Down feathers. Down feathers form the inner insulating layer, while vaned feathers form the tougher outer layer.
In most creatures in the galaxy, feathers or a similar structure evolve first for thermal insulation, then specialize more with the need for flight. As most birds on Collena are flightless, many specialized feathers for flying simply no longer exist on most species except for the Yorikandi and Lekanni.
Then there are creatures like the Sea Crawler. Those adorable sea cows don't seem to have feathers at all other than some bristles near their eye lids. These bristles look structurally similar to hair and fur in creatures from other worlds, modified for protecting the eyes from debris.

Bird feathers are able to Fluoresce much like mammals on Collena. Unlike mammals that fluoresce in a shorter wavelength, bird feathers will fluoresce in longer and shorter wavelengths depending on the feather type and species. Birds and Mammals both are mostly plainly colored in visible light, which is very useful for hiding in tall grass, bushes, and more, but under a UV light, they are brightly colored and stick out to any creature evolved to see such things.

There are many worlds in the galaxy where creatures evolved feathers, or a close analogue to a feather. While many of my colleagues believe that feathers were able to somehow evolve independently on every single world, I believe that our old friends the Sarlar may have had a hand in influencing their evolution some three hundred million years ago!
We'll take the feathers on Collena and Earth for example, at least when it comes to birds. Depending on the type of feather (and there are too many to properly list), the structure is nearly identical, both physically and chemically. How would it be possible that such a similar thing would evolve on two completely different worlds?
There are some differences, yes. Evolution will do that no matter how much outside influence there is. I'm just saying, it is too much to be mere coincidence.
- Zilda Marn, Class C researcher


((Click the Above Tabs to View some research noted from the famed Vusinor Researcher Zilda Marn.))

The griffin is adorable! And I particularly like the fluorescence and anomaly sections. Great article!