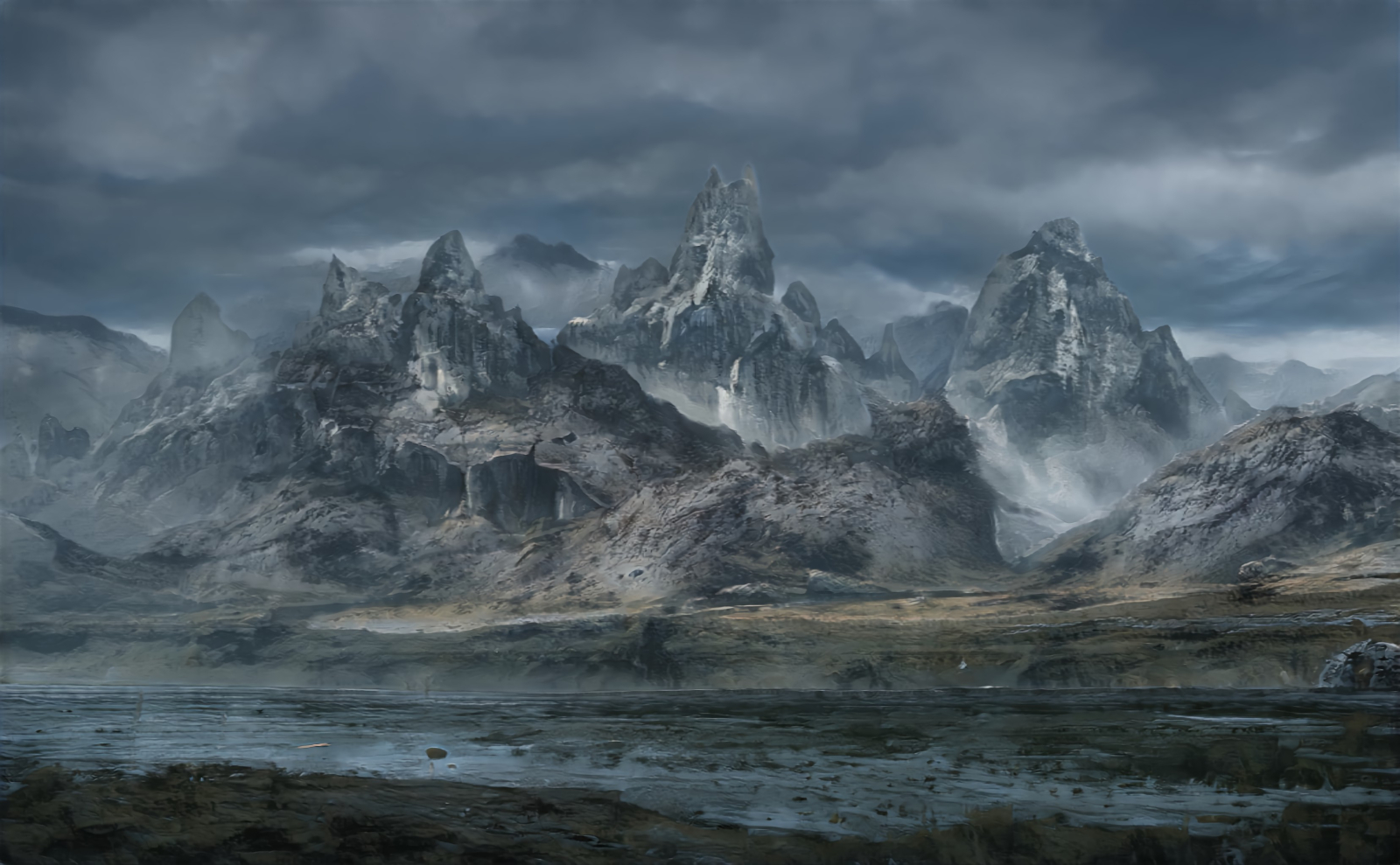 The immense archipelago that forms the Myriad Islands is a marvelous region. Of its numerous islands however, only a few are inhabited. And the main city in the Myriad Islands is on one of the largest land masses, called Siiem.
Siiem island has been colonized in 697.II, as families seeked shelter from the fightings in the eastern
Golden Sea. Those refugees of the early Third Magissal war era attempted the daring journey eastwards, and found fortune on the jagged slopes of a mountainous island. There, they found a plentiful habitat, in which nature has lots to give, but can take take it all back in return. On the isle, people quickly learned to profit from its valuable resources, and to protect themselves from the land's dangers, while paying heed to the gods' might.


One of the isle's main features is its massive temple, built with great efforts on the island's summit. It inspires awe and respect to anyone coming on the Island, and is one of Boomal's most notorious monuments.
There are lots of skippers takling and writing in their logbooks about the magnificent temple's sight offering itself to ships as they reach Siiem. Here is one from a veteran captain:

The currents prove strong on her belly. She rocks and cracks, heeled hard by the southern wind as she approaches the end of the journey. And behold, for the crew to have a first glance at the island's peaks. At the highmost, two obelisks stand barely visible over the relief. Overviewing the whole island, the Red Temple
is an ode of the utmost respect to the gods, whose tantrums are so feared. Its deep red colour is what gives the temple its name, even though it was built black, from the dark local basalt, but decades of cold, damp conditions at the summit have turned its exterior brownish red.
In the islands, where nature is both generous and destructive, faith is strong in the Rebaari gods. Their power have scarred the lands several times since the arrival of men. Not just once but thrice, the gods have let their will loose on the island. In 708.II, when Caeia, who usually is so calm and giving, let the mountain explose on the eastern coast, ravaged Astfront. Ten years later, the Temple was built on the mountain, they hoped to satisfy her and be protected, but she would not be contempt enough, and the southern part of the island erupted once again forty-three years after the first blow. Today, people still talk about it in fear; houses crumbling from the quake, the skies turning dark as night and red as fire, rocks the size of a barrel falling down on the towns.
And cataclysms do not come from the lands only. Surrounded by the ocean, they are at the mercy of Thaisse's play. It's not only the storms hitting the Myriad Islands every year, that instill fear into the minds of even the hardiest islanders. In the memorable year 786.II, after an unprecedented quake of the island, the ocean suddenly pulled back, to come back up in an immense wave. The tidal flow rushed and hit the island's slopes, and swallowed many houses and their inhabitants in what remains as the deadliest cataclysm the islanders have faced.
All these perils have forged the islanders' minds. They have learned not to anger the gods, and in the midst of these events, the Red Temple is the only hope they have to keep the gods' temper away. I'm not really a rebaari faithful, I'd rather put my faith in Kal's will, but from my long career between Siiem and Aarden, I can't help feeling the presence of the gods in the people's lives. And I take care not to bring any faithlessness to them, because offenses are despised and bad for everyone's business.


When ships arrive at the Island, there are not many places to make it to shore. The best suitable coast is at the end of the Black Bay. There, the waters are calm and deep. It was the best area where to construct the port.
In The dark waters of the Black Cove, the lapping waves and creeking rigs are joined in the night by cheering lights from the port of Siiem. Ships calmly rocking asleep, waiting to be loaded or unloaded, while the crews spend their well-deserved breaks in eateries and taverns, that is life in the Myriad Islands. And while the last rays of the setting sun shine on the mountains, the sea turns black in the bay and the heat of the day dissipates in the air.
As a silent witness of this gentle dusk, the fort of Black Bay overlooks the constellation of masts. Atop of its walls is the best view of Siiem. It gives the soldiers on watch a full panorama of the port, with the mountains as background. In the fort however, there is no recreation. Corps come here for intense training. Scout trainees undergo extreme expeditions in the forested wildlands in the mountains. They learn skills for stealth and surviving behind ennemy lines, and must spend days to months in autonomy on the volcanoes.
The fort provides workforce to the islands. the Service's pioneer corps come to the island for field training, and consequently are mandated for construction and layout in the island. Thus, it is by their work that the port was fully rebuilt between 788.II and 792.II. They replaced the worn wooden docks with stone piers to increase the port's capacity; embankments were constructed to protect the port from future tidal waves, and terrain was terraced to create more space for the city to grow. The Service has played a huge part in landscaping the island, including for the construction of roadways and tracks across the mountains. Its political influence on the local ruling however is a subject of distrust from the locals, who are rather reluctant in letting foreign organizations meddle with their business.


Siiem's growth has been made not by massive imput from mainland operations or by the initiative of large companies. It's the work of a few families, who came by their own will and effort, and made on the island their own living. Farmers, they are the ones who created fields for growing the newly discovered spices and foods. Sailmen, they are the one who brought the island's production to mainland markets.
The port of Siiem is the most populated area on the island. The slopes are low, and bear a constellation of colorful roofs. There live the farmers, dockers, innkeepers. They created large terraced areas to grow crops: greenroots are tasteful tubers and a profitable food source. Karqua, carec and Corquus are all native plants that produce expensive spices. And in summer, when karqua bushes are in full bloom, they give the island's slopes bright colours of red, orange and pink, to the delight of sailors.
From Siiem, there is a single way to travel to the eastern coast: a road goes up the mountain, following stormy rivers. In a few exhaustive days, we reach Astfront. It's a smaller version of Siiem, but the town does not go down to the sea. Locals know the dangers of storms and big waves, and have learnt to stay safe on the high grounds. On the eastern side, crops are a bit different. The drier and sunnier weather is perfect for the growth of Benia trees, which suffer a bit from the dampness on the western coast. Those are small trees producing sour and sugary fruits. Even the large leaves are tasty and are a common ingredient in local recipes, while the fruits are often turned into syrup and liquor. And liquors from Astfront are way more tasty and refined than those grown and distilled in Siiem.


North from Astfront is a smaller community. Ermitlair is named after the original presence of an ermit. A recluse man had made his home in autarcy. His rebaari faith had made him search for a way to get more deeply connected to the gods, by ending all ties to the human society. It is said he chose this place for its unusual feel, as it is said to be an area where the gods' magic is strong. It is very probable he died during the 786.II catastrophe, and several months after, a small group of families who had lost their homes in Astfront decided to rebuild the place. They gave it the name Ermitlair in memory of this faithful man, and started athe village anew from what he had built and lost to the wave. The place has kept its spiritual purpose, and often welcomes travelers seeking for divine presence in the magic winds.
Siiem is a large island. It is part of the volcanic chain of the Myriad Islands, and is itself created by three active volcanoes.
The island is around 11.5 rides across at its largest, and its summit is 159 cords high above sea level. Most of the island is covered in dense forests, except for populated and farmed areas. Show Spoiler
Those measurement translate to 230 km wide and 3180 meters high (SI). See Field guide for practical measurements vol. I for further informations on Boomal's standard measuring systems
Only around 85 000 people live on the island, mainly in the port city of Siiem.