As told by Nal'Draken Bloodrage

The Eldritch Fire spell is one that I personally love. It gives me an added edge in combat when my blades can't. Plus it's really good at campfires, torch lighting, and cooking. As soon as you get the ashy and charred taste out of your mouth.

The effect of the spell is to create a flame from the otherworldly connection I, and people like me, were bestowed with. I've found that I can do a variety of different things with the fire once created. Form it into a ball and throw it, release it like a jet stream of purple-greenish flame, or form it into different shapes and objects. This one time I made it into a bat of fire and smacked some poor dude's face clean off. Oh, it was amazing, but I drained him of his Essence because I needed to be sure he wouldn't be found.

Sides effects?! What do you take the spell to be, some sort of nurse's prescription that makes you have a headache? I mean there are some effects that are bearable, obnoxious, but bearable nonetheless.   I've encountered my veins boiling to extreme temperatures, my eyes flicker to a liquid black orb, I have some tinnitus in my ears during the spell, and finally my veins with the boiling glows with the otherworldly Essence I use for the spell.   Another way the spell takes effect into reality that I've seen is just regular flame. I don't know what these other users of the Eldritch Fire are doing to make theirs look more natural. Maybe it's me and not them, but either way, mine looks better.

The manifestation that I usually see is a flame of black and purple with green speckles like the cosmic sea that we use to travel between the four realms. It's quite a spectacle to watch, if you're not the one that's receiving my pyre.

Where did I learn the spell? Well It's because of Melisandres, that little canine bastard. He showed me the spell and... well, let's be perfectly honest - it's pretty cool. I've been able to use it many times to cook my meat, provide heat, which is strange considering it doesn't feel "hot." I know, that sounds extremely odd, but it's the truth.

I don't know when the discovery of this spell came to be, but I think it might've been created by the same person that showed me how to use it, Melisandres.
Gestures & Ritual
So how I usually call to the spell is by taking the Essence, or for you, Mana, and gathering it with my hands while speaking the incantation.

At this point, the Essence makes my veins bulge and glow before I start to gather it into a shape and then I release it upon the world. 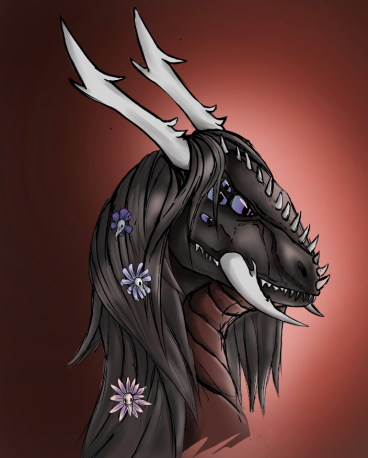 Thank you for that. Really appreciate both the comment and the thanks for the congrats!

Great concept! I enjoyed reading this! Thanks for entering the WE 2021 Spell Category! Best of luck in all the categories you entered!

Interesting way to learn about a spell one of the people that cast it. Especially love how he describes what he feels when he uses the Eldritch Fire.