Show Spoiler
The leader of the The Assassin's Club , a cold and detatched loner who prefers to stay in her own lane. Her father, Marcus, was the headmaster until his sudden disappearance. Katarina grew up in a prominent household, dodging assassination attempts since she was 9 years old. After losing her brother in an assassination plot that was meant for her, Katarina closed her heart and became a true loner, fearful of her name bringing misfortune to those stubborn enough to worm their way into her heart.     Despite her cold demeanor, Katarina holds the very, very few people she trusts close to her heart. She speaks with very few words, which most people assume to be because of her cold stoicism... but in reality, is just a result of her being an awkward loner.     She's in her second year at the Durandal Godweapon academy, content to be the head of the Assassin's club. Nobody dares to try and stand in her way.       Her weapons are twin daggers,named Corrupt and Flourish. Both were given to her on her 10th birthday. They're a set of serrated daggers, which both can be infused with her Mana for further lethality.     Katarina's signature technique is called Final Flourish - Wilt and Crush   Katarina outputs all her mana into her hands, wrists, and legs, unleashing a storm of daggers that fly around her in a 360 degree angle. Despite numerous questioning by the students, she's never specified where she gets all the daggers from...       She holds a B rank in the academy. 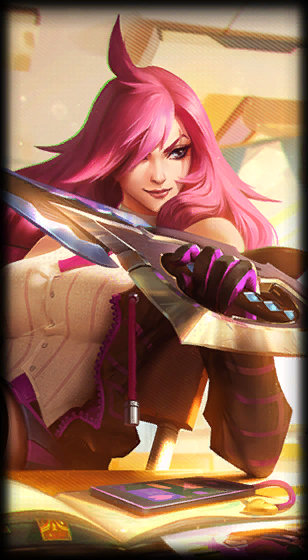