Tops is played with polyhedral dice. The point of Tops is to roll as many high rolls on each die as possible. A maximum roll on a die is called a Tops. The player with the highest number of Tops wins. If there are multiple people with Tops, it comes down to points. Each die has a corresponding value from 1 point to 7 points.

If there is a tie on the Tops calculation (ex: two people roll only one Tops, a d20 in both cases) then the total roll is counted and whoever rolled the highest value on face showing wins. This is where the d10 (percentage) die really comes into play, as it can add up to 90 points to your roll.

If no Tops are rolled by any player, the points are calculated by roll total. This is also a good place to the d10 (percentage) die to shine.

Tops is tradiationally played in seven rounds. Whoever has the highest number of Tops at the end of the game wins.

Tops can be played alone. Unlike when played with others, the only purpose to this game is to get as many Tops as possible. When you have no Tops, it is called a Bottoms round, and counts against your total points as a -1.

Just like with multiplayer Tops, this is tradinally played in seven rounds, with total Tops and Bottoms calculated at the end. Single Tops is sometimes played competitively to see who can get the highest points.

This is a variation on Single Tops that plays by golf rules. The point is to get as many Bottoms rounds as possible. This is also played competitively.

It is also called Seven Sixes, usually by Mundanes.

This is a controversial variant on Tops where the top roll of 0 on a d10 (regular) or a 00 on d10 (percentage) is considered the bottom roll. Instead, the Tops roll is a 9 or 90, making the highest non-Tops value possible 8 or 80 for the d10s. 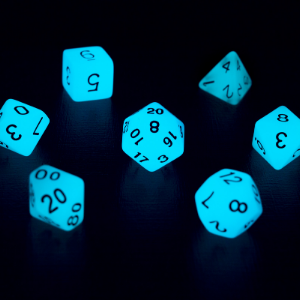 While more people are capable of playing, the tallying of rolls and Tops can become tedious with more players.