Eve Quinn is an Ahrimane Gangrel under the employ of Seneschal Corinthia Banner. Rightfully named a bitch, Eve hates most everyone except her siblings (Patrick and Nora Quinn). She is an ex-Thin Blood who is desperate to do anything to never feel helpless ever again.

Eve has the symbol of the Thin Bloods branded between her shoulder blades. It is both a mark of pride and revulsion for her, and she regularly attempts to carve it from her skin, yet just as often wears shirts that expose and even draw attention to the scar.

Eve stands defensively at almost all times. Arms crossed over her chest. Chin lifted challengingly. Eyes flashing. Her siblings are the only ones who bring any consistent softness out of her, though children and young mothers are often people who can bring her gentle side out (she's not very good at being soft anymore though, and it makes her awkward and Eve actively fights showing any weakness).

Eve tends to wear outfits that would be categorized as 'boho chic', with long, flowing shawls over short, simple shirts and pants. She does not like tight fitting clothes, nor thick clothes, nor dresses and skirts. Sandals are her favorite types of shoes, but only wedges (if she has to have a heel).    She wears necklaces sometimes, but all other jewelry is frivolous or dangerous in her mind. Earrings to be ripped out of her ears and rings could tear the skin from your fingers or even rip fingers off entirely.

Eve Quinn was the second child born to Niall and Roisin Quinn. The kinder and quieter of the two sisters, she was far more well liked than her sister when they were young. Nora, the eldest, chafed under the rules of polite society, and joined an Irish gang while she was still young – leaving Eve to care for their younger brother, Patrick (their mother had died long ago and their father was a mean drunk). Eve eventually met and married Shaun Byrne when she was but 17 years old… a chapter of her life marked with tragedy.   Nora died in a shoot out while working with the IRA, and Patrick moved away shortly afterwards to pursue his own fortunes, taking a position with an English bank as a clerk. Eve was left alone to grieve. It was two years later that she had her first child: Samuel. She loved him with all her heart, but her happiness was not to last. Shaun filed for divorce the next year, claiming infidelity on Eve’s behalf, and though she denied ever having strayed, the divorce was finalized and Eve was tossed out. She was destitute, a marred woman, and her child was lost to her.   This betrayal broke something in Eve. When once it was Nora whom could be counted on to be a troublemaker now Eve threatened, stole, even killed to survive alone. One of the robberies ended poorly for her, and Eve woke up with a splitting headache and a thirst that wouldn’t quench. A passing Gangrel, impressed with her ferocity and independence, embraced the desperate woman and released her on the Irish countryside. Eve, like always, adapted to the new situation with the ferocity of someone who had nothing to lose.   At this time Nora suddenly reappeared. It soon became apparent that both sisters had met their end and rebirth from the fangs of these undead creatures, but something was…. Off. Nora was stronger. More powerful. And Eve was… not. Oh she was still immortal and drank blood like her older sibling, but she was unable to heal like her sister, or access many of the abilities her sister displayed.   The two of them didn’t care though, and they lamented that their brother was not with them. Nora was the one who came up with the idea to embrace him as well, so none of them would ever be alone again. Eve agreed, though her blood was too thin to allow her to be Patrick’s sire. It turned out, Nora’s didn’t take properly either: Nora, a Brujah, sired the Caitiff  Patrick Quinn when he reached the same age as his sisters did when they were embraced.   The three of them soon left Europe for the Americas where they lived happily for five years. That is when Eve was discovered to be a thin blood by the Camarilla in Boston and was taken by them. Forcibly sun branded by the Camarilla, Eve was tortured by them – one of the first thin bloods in modern nights and ostracized as a sign of Gehenna. She escaped, but swore she would never forgive them for what they did, nor would she allow herself to be so weak ever again. She stalked one of the Camarilla goons who had first captured her for weeks before attacking him and viciously draining him.   Eve after this time left her siblings, wandering on her own for years. It was in New Mexico she met the Ahrimanes, and they welcomed her in with open arms. She agreed to join their tribe, and has lived happily amongst them for years. However, in recent nights her sister Nora has contacted her: Patrick, who had decided to live in the Caitff friendly city of Baltimore, has gone missing. With the signs of a sect war, Eve rushed to join her sister in scouring the city for their little brother before it’s too late.   Finding him safe with the BCU, Eve and Nora were relieved. However, there were other powers at work. Approached by the mages Steven Williams and Mary Aranha with promises of power beyond their wildest dreams, the Quinns agreed to publicly break the Masquerade.   After disrupting a city street race (Eve transforming into a wolf and Nora throwing a car), the Quinns' faces were plastered across every news site and broadcast network. Patrick even became something of an internet heartthrob.   However, they grew remorseful of their actions and repented, going before Queen Eleanor for their punishments. The siblings were forced to blood bind themselves to the priestess of Lilith, Corinthia Banner. Unbeknownst to the queen at the time, however, neither Eve nor Nora could be bound to any vampire. Patrick was not so lucky.    Still, Eve and Nora remain in Baltimore for fear of what may happen to their enthralled brother should they flee. Eve despises the city, and is miserable being trapped here. Yet what choice does she have?

Eve is part of a New Mexico coven of Ahrimanes, and takes great pride in who she is. When ordered to bond herself to Corinthia Banner following the Quinns' Masquerade Breach, she proudly spat the blood back in Banner's face, declaring with glee that she was an Ahrimane, immune to such compulsions.   Despite her taking great pride in the Ahrimanes being independent, not beholden to any sect, Eve's beliefs are most closely aligned to the Sabbat. If there was an Anarch movement in Baltimore, she would almost certainly join it, but between the two she is much more comfortable with Sabbat vampires than any other sect (if she was forced to choose).

There are only two people Eve trusts in this world: Nora and Patrick, her siblings. She is fiercely protective of them, but also wants to keep her shit as her shit and is often stand offish or lies to them out of a misguided attempt to keep them out of the line of fire from her own fucked up mind.   Nora can't help but play the protective older sister, and is constantly having to pull Eve out of whatever funk she's gotten herself into (Eve is far less mentally stable than her sister, so this happens far too often).

Because of the Quinns' crimes, they were placed as servants of Priestess Corinthia Banner. Unable to bond either of the sisters, they are kept in line by their brother's Blood Bond. Eve hates Corinthia, almost as much as she hates Eleanor. But she does not wish to have her brother Pat come to harm, so she plays along... reluctantly.

Corinthia refuses to call Eve by her first name, citing that it is the name of a weak woman. Instead Corinthia uses Eve's middle name, 'Mare.'

Thomas and Eve have only met a few times, and despite Eve's prowess as a fighter, Thomas knocked her into torpor with one punch. He revived her, and Eve panicked, experiencing flashbacks to when she was a prisoner of the Camarilla.   Eve is terrified of her Primogen, embarrassed of both the way he was able to dispatch her so easily but also that he is aware of some of her darkest secrets. She avoids him if at all possible.

Of everyone in Baltimore, there is no one Eve despises more than Queen Eleanor. Eve would have never said that there was not some punishment deserved for the Quinns' Masquerade breaches, but when the Queen ordered - commanded Nora to murder Eve's grandson Noah Byrne, Eve instantly hated the Queen with every fiber of her being.   Through some cunning work arounds by Patrick and Eve, Nora was staked while Noah was spirited away and hidden by a coven of European Ahrimanes. Then they were able to remove the Dominate still infecting Nora with the compulsion to kill Noah.   She has no choice but to follow the Queen's orders while Patrick is still held hostage, but if she ever gets the chance, she would drain the Queen herself for the satisfaction of watching her ash. 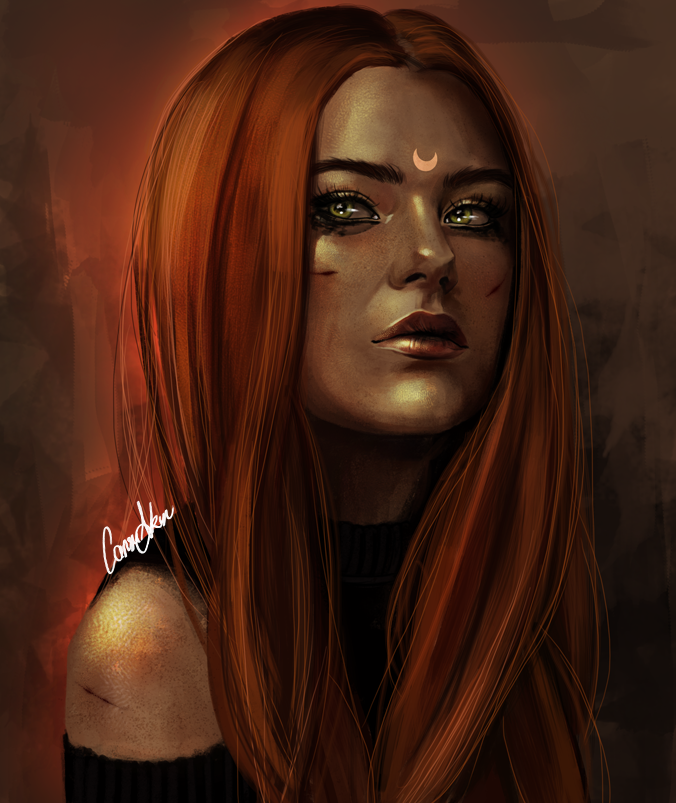