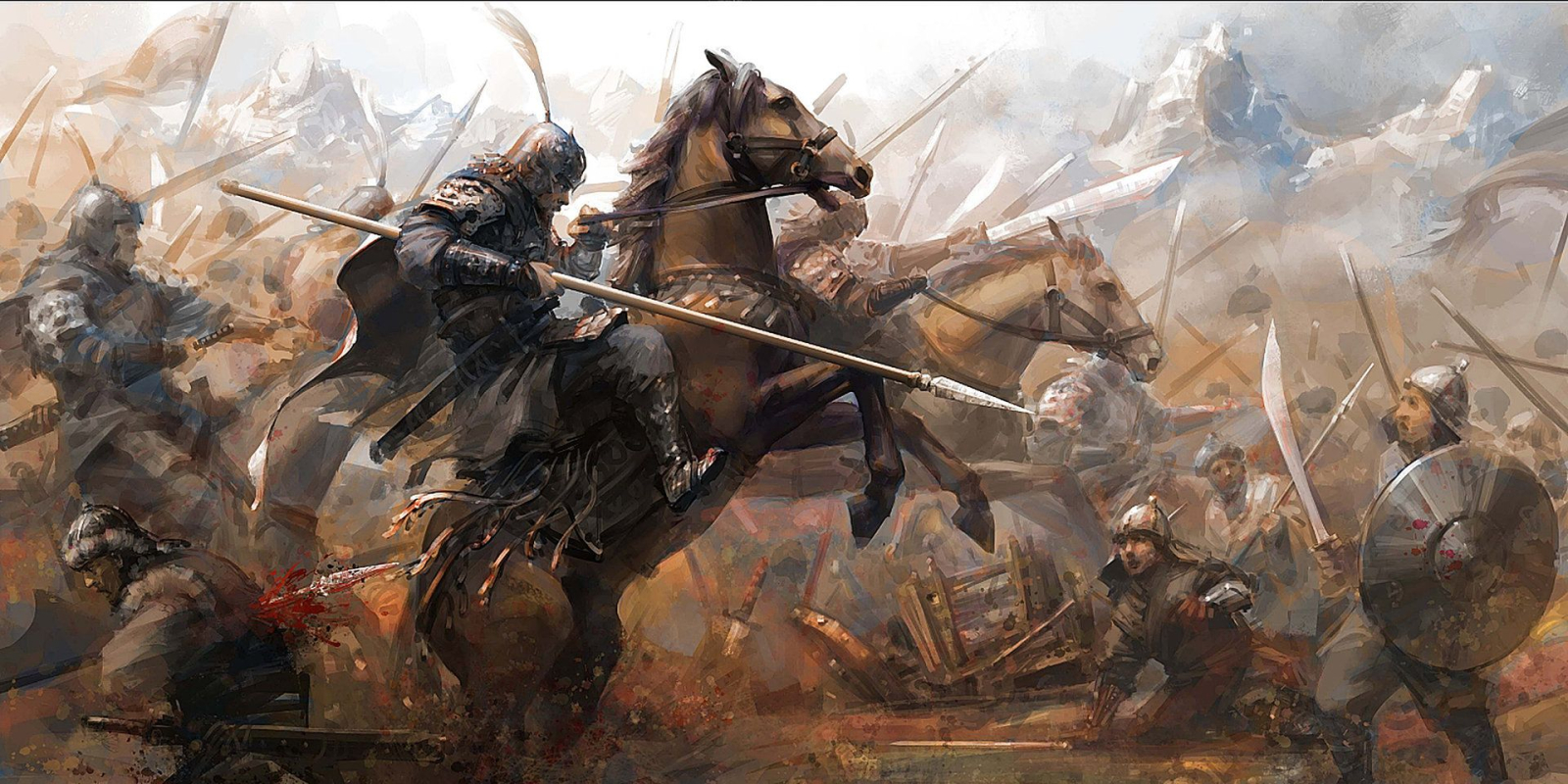 House Tyrionn, said to be one of the greatest houses to ever live, and here is the history.

House Tyrionns public Agenda is to take over Azuron, and seize the crown, atleast, it was.

Before the later part of the civil war, House Tyrionn was a very wealthy House due to their relationships with House Warhall and House Jourles. They had many castles and forts scattered around, but only had one city, the city Saurous. They had over 500,000 troops at beginning of the war, but lost over 450,000 men by the end. The troops were equipped with Long swords or War Axes for Heavy Infantry, Short swords and Shields for Light Infantry, Short bows and Long bows for Archers, catapults for artillary, and horse riders with a variety of different weapons. They had 10,000 naval ships, all had a crew between 50-100, those who werent manning the ores had bows that mainly used flaming arrows.

When it was first founded, House Tyrionn was just a tribe. They stayed like that for a few years, until the most powerful House, House Warhall, took House Tyrionn under its wing. It protected House Tyrionn from all aggresors, but when Lord Luwin came into leadership, he declared war on House Warhall and the King, Norm Warall. They went to war for decades. When they finally defeated House Warhall in 3000 BCW, Lord Luwin Tyrionn died in the final fight. Before they could get Luwins heir to the throne and to be king, they were taken out by House Stwaller.

House Tyrionn was taken out in 01 ACW, just after the death of Lord Luwin Tyrionn. Before Luwins heir could come into leadership, House Stwaller sent in its whole army and attacked Saurous. They murdered every blood house member, and enslaved all other members.

House Tyrionn has twenty castles, 1000 people in each. There is 50 towers, with 20 guardsmen in each. Then, there is the city Saurous. It has a population of 998,091, and has a very high birth rate, but it plummeted during the Civil War, and with the death rate, it was very low, but when the Civil War started it shot up through the roof

House Tyrionn control a large province that is on the North sealine. They have lived they ever since House Warhall destroyed House Yernin so House Tyrionn could inhabit the land.

They had over 500,000 troops at beginning of the war, but lost over 450,000 men by the end. The troops were equipped with Long swords or War Axes for Heavy Infantry, Short swords and Shields for Light Infantry, Short bows and Long bows for Archers, catapults for artillary, and horse riders with a variety of different weapons. They had 10,000 naval ships, all had a crew between 50-100, those who werent manning the ores had bows that mainly used flaming arrows.

The tech is all the same as all the oter Houses. They have: War Hammers Shields Long bows Short bows Long swords Short swords Spears Javelines War axes

House Tyrionn is very friendly with many other houses, including House Jourles, and House Perill, Huse Gounda, the houses that started the war with Tyrionn. During the Civil War, there were 13 other Houses that allied with House Tyrionn, but over 25 Huses banded together and fought against House Tyrionn with House Warhall.

They have vast fields filled with corn, wheat, potatoes, and much more. They have steel mining, slaughter houses, farms, you name it. The only thing they do not have are Horse Breeding Pens. They get all their horses from a trade deal with House Gounda

They mainly trade with House Gounda, mostly food and weapons and animals, but sometimes they trade resources when the other house in in dire need of something. They set up a large trading booth that is in between the two corders, where a caravan from either House goes to when they make the trade. House Tyrionn also trade with other houses, and when they do it is always overseas.

The education in House Tyrionn is simple, and the same for all classes unless they go to different schools after Simple School. Every boy goes to the Simple School for 2 years, and when they finish they are given the followng choices: Dropout Knight Academt Agricuture school Polotics school Travel school   For girls, they also go to Simple school, but are given differnt choices on what to do after. There is: Dropout Princess academy (Only for Nobles and Lords daughters) Agricuture school Labor school

They use storied buildings, built with brick. They have a very sufficient sewege system in the city, and working roads all throughout the region. They have border towers along the border of House Warhall, but not House Gounda. They have a wall surrounding City Saurous. There is a large castle for the Lords family in the center of Saurous.

In the beginning, the four gods were at war. During one of the battles, all four of their fists collided, and created Azuron. After seeing the beautiful creation they all made, the decided to have peace. They watch over Azuron for eternity, only stepping in if a religous member is in possible danger.

The religion came from a drunken peasant in a pub, but it ad gone around like wildfire until it began to create actual teachings and rituals.

The four gods fists collided, and with all of their powers combined, a bolt of lightning crashed into the physical plane and created Azuron.

_ Never say any of the gds names in vain

They have to pray on the mat of Furss before and after the sleep, no matter what. If someone doesnt, it is seen as disrespectful towards the religion.

The leader of the religion is called the runter. They are appointed by getting blessed in the mountains of Aeock, the one place high enough to pierce into the gods realm. They are distuingeshed, because they wear blood red robes, with all the gods symbols mixed together on the chest, painted in gold.

There are no actual powers granted to the runter, but Runter Garrack lied and said that he could talk directly to the gods. All runters below him decided to lie, thinking this woulf be a good way to gain power.

A war in 1000 BCW caused the Old Gods to be destroyed and no longer mainstream, the New Gods winning the fight. The Old Gods would never had lost unless it hadnèt angered King Hurmaan Warhall.
DISBANDED/DISSOLVED