As if the one frost giant prior wasn't near death enough, the three trudged forward like leering elephants to clearly terrified rabbits, as equally territorial and capable of stamping out these interlopers. With their backs against one another, seated in a tight circle, Relomas pressured his elbow against Vigo's side...After all, coaxing his Halfling luck prior worked so far!   "Do...something..." He whispered, petrified that any motion might be seen as an act of hostility and they would be little more than gunk under the mammoth hide sandals these towering tyrants wore.   "Oh, and what would you have me do? Perhaps we can talk about the weather up there, or maybe I can take the next three years of my life shining one of their boots!"   "Just do anything!"   Desperation wore on them all at their impending doom, and, frankly, doing something was better than nothing since it seemed they were bound for disaster. With shaky, uncertain legs, the shorter figure stood and dusted at his vest, his mind racing with thoughts of what exactly to say.   "Ahem! Ex-"   Yet no sooner did he attempt to speak did a small gathering of blue, scaled, gliding creatures dove at faces of the approaching giants, causing them to shield their faces and roar in defiance of these winged fiends biting and clawing.   "Dragons!" Toren'domir exclaimed, though it seemed standing in wonderment was not the correct option. Whilst kicking and diving at the frost giants, one of the swooping figures turned and shouted at the group.   "Flee!"   And flee they did. Dodging deftly between stamping feet, bounding through high reaches of snow, slipping and sliding on uneven terrain until they were left panting and gasping in a clearing.   "Whew...Alright...Well, I'm a bit tired of all of this dashing about nimbly wimbly!" The excitable Gnome, Gillibee, exclaimed, hands on her knees and labored breaths escaping at the rate of her swiftly beating heart.   "I'm afraid thou art not out of the clearing yet, little one..." The voice bellowed behind them, and as they turned the view of their saviors struck them in awe, equally as impressive in a state of rest as they were fiercely battling and distracting mighty frost giants. "...But peradventure we can help maketh some distance between thee and danger. Cometh now."   "Tia...Mera's...Luck! We get to ride a real dragon!!" Moro seemed clearly beside himself at the prospect, and who could blame him? Dragons were mostly bound to mythology, with some skeptical that they even existed. To encounter one, let alone ride upon it, seemed a wish come true, and in different ways for different people. As they laid their heads slowly down, the group approached, now able to appreciate their regal stature rather than fear it as they had the king black dragon.   Lobir mused, hope in his tone despite his otherwise voiced, grim desires, "Perhaps you can drop us all to a painless death..."   Silence hung in the air, punctuated by Relomas's groan, "You can be a real downer sometimes. Thystle, ride with him and make sure he doesn't throw himself off."   "Hello. I am Toren'domir, and we are in your debt." He offered his nation's formal greeting as an olive branch, which was met in kind by a light bow from the figurehead.   "Good morrow to thee. I am Alanishaudalin. Now, we should maketh haste." It took no further coercion. They were quick to climb upon their willing mounts, many two or even three to a dragon, leading to a bit of expressed concern upon taking off, but their worries were swept away to relief the moment the wind whipped at their faces, putting distance between their previous woes and their newest allies.   "Your name is much smaller than G...re...b..." Toren shouted against the wind rushing upon his Elven features.   "Greburigmusstionthynthdrosdir...And it's likely because I has't not achieved as much as he. Perchance mine own name shalt groweth more regal at which hour we bringeth down that winged fiend, Yogregoriondiolaguvin."   "Who...?"   "The demon Dragon himself - Yogregoriondiolaguvin, the Ebon Vessel!" If Hoarmin, the Pale Terror  was to be the chief blight upon the land, it seemed this 'Ebon Vessel' was the nightmare of the skies.   "That reminds me. He said he didn't intend to help, so why are you aiding us? The black dragon king seemed fine with letting that monster fly about uncontested." Rage trembled in his chest, wretched memories of the tragedy befallen at the hand of the Dragon titan resurfacing.   "Most doth not intend to help. We art of a rebel group who standeth unconvinced that nothing can beest done. We wilt resist these monsters to the very end." 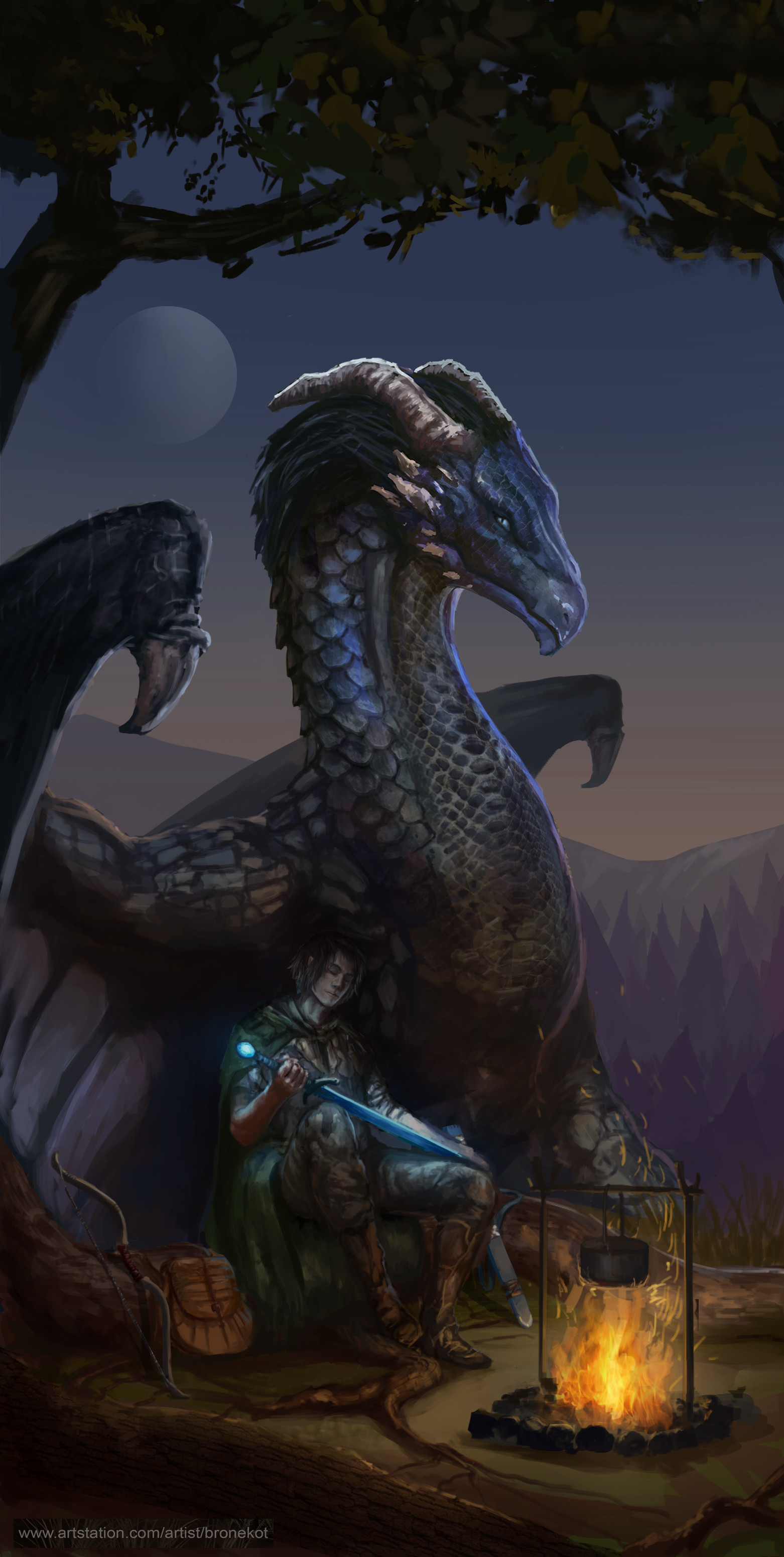 by Oleg Bronekot
Their descent was slow, with caution paid for any marauding Orc warbands that might be patrolling, but when deemed safe, the group began to land. The hour was late. It was time for camp, and with the excitement wearing off, the weight from their adventures made them weary and sluggish. They were eager to bed down, though one remained awake, quietly setting a log atop the campfire to keep it alive just a little while longer. It was Toren'domir, lost in thought, blade settled across his lap.   "Hast thou not had enough of the day?" Alanishaudalin spoke, settling near to the Elf.   "I've just a few things on my mind that keep me from rest." Silence hung between them, equal parts exhaustion and apprehension.   "Thine blade is beautiful. Hast thou a name for it?" Naming was clearly symbolic to Dragons. It was a statement, a definiton. Truly a rose would not smell as sweet by any other name, if the idea proposed to the winged ilk.   Yet Toren'domir shook his head, "I haven't."   "Hmm....Perhaps Letoriondalkoverit-"   "I think i'll call it Culhainn." As the name was muttered, a brief shimmer ran up the broad face of the sword.   A thoughtful nod was offered in kind, "Culhainn. Yes. That name doth please." The two studied the weapon, seemingly with their minds elsewhere, using the blade as a vessel for their idle gaze, broken only by Toren'domir.   "Senera believes me capable of greatness. I'm not so sure. I've always lived a simple life. I'm not cut out for fighting or liberating everyone from this dark tyranny. I guess i'm just hoping for this to blow over..."   "Fear me that wishing for this to pass is a fool's errand. How long hath it been since those terrifying fiends hath walked these lands?"   How long had it been? As he stared to the mystifying, ever moving surface of the weapon, lost deep in thought, memories washed over him. The lightning flash that revealed Hoarmin. Hugging his wife. The attack on his homeland by the titanic Dragon. The months of treacherous travel, hiding from patrols, scrounging for food, trekking through the snowy peaks. His tone turned grim as he realized just how long he had been at this.   "Half a year. At least."   "Aye, and with no end in sight. The vile giants encourage the foul green skins to terrorize the land and then really their winged tyrants blot out the sky. This is a victory that must beest seized through acts of heroism."   "I'm just not sure I am cut out for heroism."   "And yet you've retrieved such a blade, has't thee not?"   "...Well...I suppose...yes."   The azure Dragon remained stoic and confident in their words, "Recall, heroes of legend art simply those who has't risen to meeteth the challenges in front of those folk. Just as thou has't before and just as thee wilt again."   This confidence seemed infectious, and with a self assured puff of his chest, the Elf nodded, this time with more pride and vigor. "Yes. We'll find a way. We have before. We must again."   "Wonderful!  Now...Doth thee knoweth what thy next course of action is?"   Like a balloon deflated, his shoulders slumped, clearly at odds, "I'm afraid not."   Yet only one of them seemed concerned. The other, with a rumbling chuckle, patted its scaly palm against his foot in reassurance, "Worry not. Alloweth us receiveth some rest and peradventure t'will cometh to thee in the morning's light."   He could not deny the call of rest any longer. Even as he drew a breath to respond, it was punctuated by a deep rooted yawn and an acknowledging nod. "You're right. Do rest well Alan...ish...va-"   "Alanishaudalin." Another chuckle easing his embarrassment, "And I shalt. May thee rest well, master Toren'Domir."   The campfire was set to rest and the two followed shortly after. It was sleep well deserved.

And what pleasant sleep. Having met like minded allies in a never ending sea of strife, made the campsite reprieve feel like curling up on freshly washed sheets. Even in his dreams he felt a relaxing warmth, and what laid before his eyes was a sea of golden clouds, never ending, and the sun hanging pleasantly in the distance. So serene was it that he had to pause...a deep inhale...an even slower exhale, and an opening of his eyes to a figure that began to descend in ray like fashion from the only celestial body in the sky. Therein stood a man, chiseled and handsome, with hair that flowed and shimmered like the surface of the sun. His radiance was inspiring, commanding Toren'Domir's attention as the being spoke,   "Hello. I've been watching your progress."   Despite the cryptic words and alien form in front of him, he didn't seem perturbed, likely owed to the serenity of the landscape around him, "Who are you?" He asked.   "I'm afraid that's not important. Only what you must do." His arm eased up and around the Elf's shoulders, standing by his side as the clouds parted, and what was once an ocean of tranquility was revealed to have a familiar, bleak hellscape below it. Nary a plot of land was kissed by the sun. Black clouds swarmed overhead, punctuated by brief spouts of lightning and adjacent thunder. The forests were gnarled, misshapen, and the mountains wilted in grief and agony. Joy and mirth had long since left the world beneath. This was Ayn as she stood in that moment.   "You must go. The road ahead will be arduous and long, but I am here to offer you aid. You simply must go where you should be."   Somehow this felt right. This was not the time to question himself. The stranger's convictions rang with assurance in his chest, yet he couldn't help but feel a bit of confusion, "Where should I go?"   Yet with a smile upon his features the stranger seemed unswayed, instead, lightly patting between his shoulder blades, "You will know. There will be no doubt in your mind. And remember...We believe in you."   Those words were all it took. His eyes immediately opened, purpose in his chest, and as he emerged from his tent on that mountainside, he spotted in the far distance the clouds parting and what appeared to be a comet streaking down towards Ayn, flying in a perfect line downwards, briefly shedding light in its wake akin to an arrow of pure sunlight fired from above. With the sight burned into his mind, he rushed from tent to tent, waking his companions and allies to rally them.   "Everyone! We must leave immediately! I know exactly where we must go!"   And with a pleased nod from on high, Solisius, smiled and muttered to himself,
"That you do, Toren'domir. That you do."