It seemed that the group was in a difficult situation.

After trusting Gillibee's "Experimental person-to-matter travel confibulator device" to bypass the treacherous frost giants that inhabited the icy valley, they were forced to pause, regain their bearings, and in a moment of clarity and impeding dread, realize that just on the other side of a door not far away, a massive creature stomped about.   When asked where they were, she responded, "I-I-I don't know...B-But I don't think we're alone!", and she was right. Upon further inspection by torchlight, it seemed they were transported on a shelving unit with a frost giant but a room away. Although the frosty behemoths were not known for their intellect, there was an unspoken appreciation for just how viable the shelf was. Roughly hewn, but assembled with some level of structural integrity, even housing multiple compartments, and one of which that would catch Thystle's analyzing gaze.   "Master Toren'Domir. Is this what we're looking for?"   His plant fiber finger extending to point below and a few feet away.

"Where is my lucky toothpick!?"

A chilling question, not simply because it revealed that frost giants could speak common, nor that this mysterious weapon that could apparently pierce any material was being used as a simple means for crude dental hygiene. No, it was concerning because it meant that he was actively looking for it, and no doubt would be thorough in his search. Attempting to slowly and methodically move throughout to escape was no longer an option, and with their wits at the heels of their impending doom, they rushed to their objective: The edge of the table facing the dishes that had stacked haphazardly up and along the wall.   "Ok. I'll jump first, loop the deadbolt with the cloaks, then Thyst-" Relomas was interrupted as none other than the gargantuan figure itself, and as the group turned to assess their situation, the frosty gaze of the homeowner assured them their presence was well known.   "Who dares enter into my home?! I will crush your bones!!" He bellowed forth, stomping towards the table and slamming his hand atop the wood to try and squash them. Fortunately they were quick, darting behind a prime cut of once-bleeding meat.   His closed fist caused all manner of items to leap in place, including the group, who began to scatter, some running behind a mug laid flat on its side, others tucking under a large tree-nut husk. Even Vigo would pop his head from a hole in a large hunk of cheese, "Are you saying you won't not crush our bones?"   A perplexing proposition, as the giant shoved his finger to the hole to try and squash his head, left only with a wedge of cheese mushed around his digit, "Yes! Wait! No! I will not not crush your bones! You will not be not crushed!"   "Wait, i'm confused!" Moro chimed, diving into some flour, his voice expelling in little puffs of smoke in various locations from his white powdered mountain, "If you're not going to crush us, then just don't do it! Leave us alone!"   If he wasn't enraged before, he certainly was now. All sorts of items were being swept onto the floor, Thystle and Senera caught in a cup until they leapt free and onto the table. "You do not tell me what to do! I will squash you like the insects you are!"   "Then do it!" Vigo ran into the open, arms out to draw attention to himself. Much to the groups confusion, he exclaimed, "Then squash us! Crush us beneath your mighty thumb!" 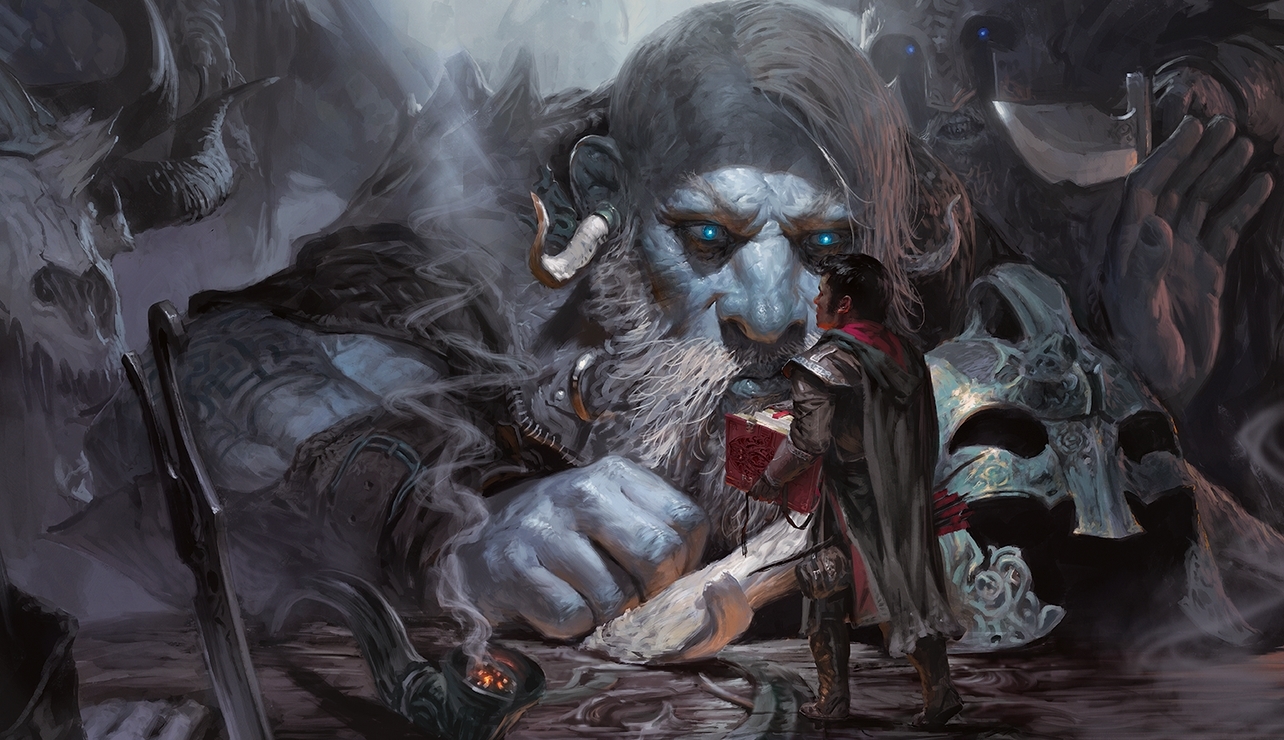 by Tyler Jacobson
His face lowered nearly to her level...gaze intense, as if a roiling rage lay just beneath the icy stare, and his voice trembled with that same fury, "I will not be ordered around by a chittering rat! You will leave this instant!!"   And just like that, he was snatched with impatient haste and tossed into a bag, his companions faring the same, bundled up like coins in a purse. What happened next was out of their sight, but judging by the grumbling, stomping, and swinging of doors, it almost seemed like they were being transported, and with a mighty toss, they sailed through the air, aided by landing in the soft, powdery snow.   Although they were alive, it was not without a few bumps and bruises from clattering against one another, not to mention that their landing was only so soft...but they counted their good fortunes in tandem with counting heads, and began to emerge from their burlap prison.   It was just as they had entered...Twin snowy peaks flanking them on either side, complete with steady drops of snow and a brisk wind lightly ruffling their cloaks.   Or it would be just how they had entered...
If it wasn't for the three towering giants surrounding them with malice in their eyes.