"Who dares disturb mine slumber?"

The very walls trembled from the bellowing voice, as smoldering, cinder gleaming eyes pierced through the thick dust that permeated the cavernous basin. 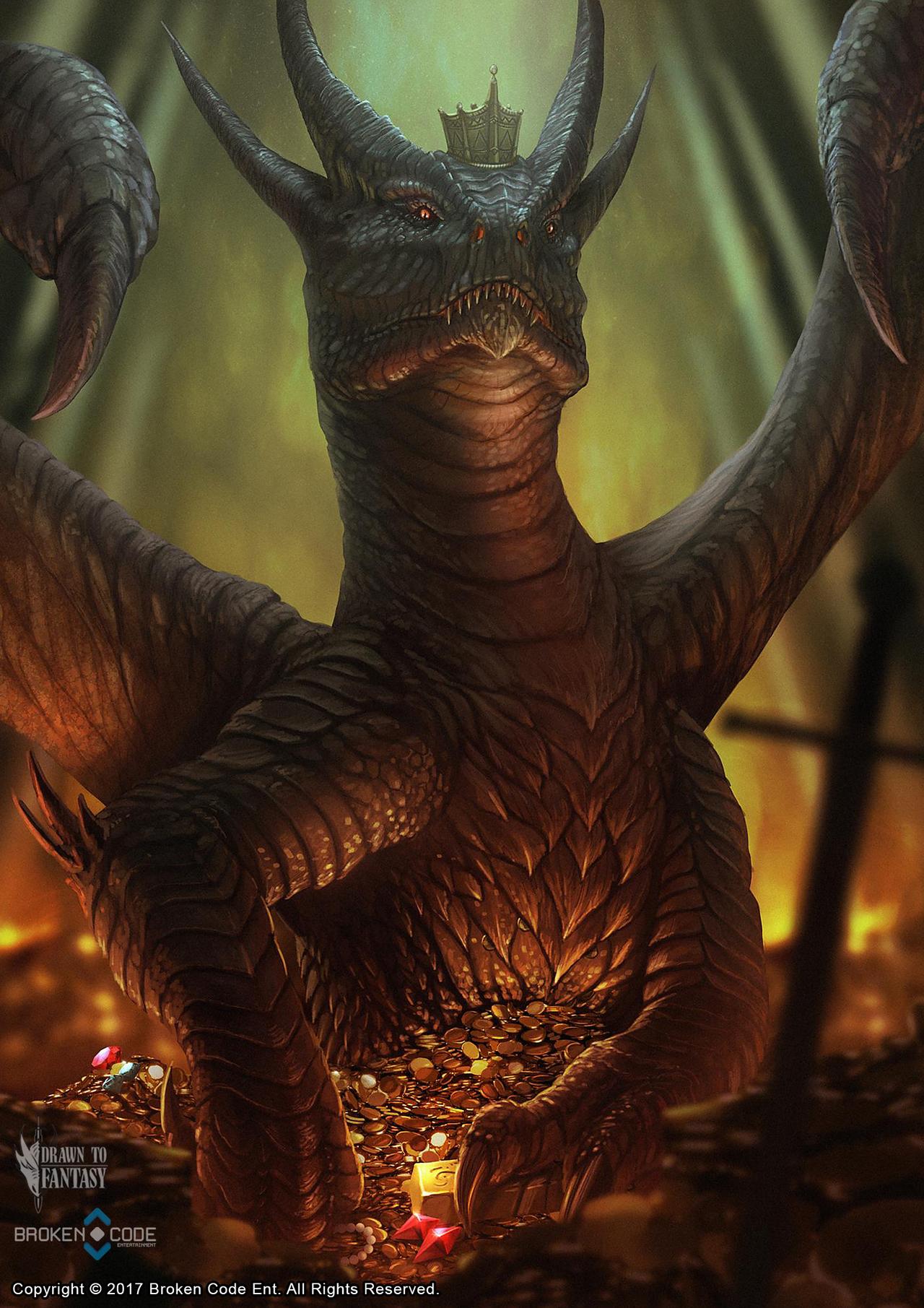 by Robert Crescenzio
As the air settled, however, they were greeted with the awe inspiring sight of one of Ayn's most greatest and majestic creatures - a giant, black dragon. Yet judging by the horde of gold that he settled upon, as well as the crown atop his head, it wasn't just any black dragon...but rather the one in charge. So rare was a meeting with such a creature, let alone up close, that the group could not find the words. Their minds laid not on their previous strife and current exhaustion, but rather on the scope and grandeur of exactly what they were faced with.   "Well!? Surely thee didst not breaketh into mine home to standeth and gawk. Out with it!"   The group looked to one another before Lalia stepped forth.   "Um. Hm. H-How do you like your tur-"   Only to be interrupted when, realizing the potential consequences, Toren stepped past her, speaking louder and with more intent, "We were hoping you could spare some clarity on the fearsome dragon that attacked our woods and terrorizes Ayn. It was unlike anything we had ever seen...Is it under your domain?"   "Hardly! Thee bethink I, the most wondrous Greburigmusstionthynthdrosdir, would allow such a creature to roam freely under mine wing?! Tis the worketh of man, this obscene abomination. Thy kind is at each moment known for their wanton desire for destruction and conflict and now we art madeth to endure thy missteps?!"   "Wait...This is not one of your kin?"   "Not at all. We knoweth not its origin, nor how to deal with it. Some believeth we should strike it down, others argue that we should leaveth thee to thy own devices. It hath caused a sort of civil war amongst our kind, and it is all thanks to thee."   "And where do you stand?"   "Frankly, I am of the mind to alloweth thy demise beest at the handeth of thy creation. Poetry, truly."   Confusion swept over their faces as they considered the words. Senera lashed out with indignation worn upon her tone, "How dare you consider that foul beast our creation. It attacked our home, killing many of our loved ones in the process, and all you can do is hide among your treasures?!"   The beast would snort derisively, peering from over its snout as its serpentine tail began to curl about the group in a threatening, yet subtle fashion. As the group tightened their formation, standing back to back to watch out for any direction the creature may strike, Relomas chimed in, his voice illustrating the nervousness his adventurers felt at the scaly arena that was beginning to constrict upon them, "Excuse me, sir Gree...berry...misto-"   "Greburigmusstionthynthdrosdir!!" Thundered the dragon, thumping his tail to the ground and sending a bit of the cavern ceiling to crumble. The tremors forced them to extend their hands to balance themselves.   "Yes! Exactly. We've been through quite a bit to get here. Is there any help you can offer us to deal with the menace? Any at all? I'm sure you would agree it would benefit everyone if we could put this creature to rest."   There was a pause...A moment to consider the offer, before the tail unfurled and he was once again collected, "Nay. I am unable and unwilling to giveth any help." The news sunk their hearts, weighed by the anchor of hopelessness. Perhaps it was their look of forlorn that slumped their shoulders, or an equal desire to see the same outcome, but after a brief spell of silence, the beast continued with a burdened sigh, "What I can giveth is information regarding a mystical blade hath said to pierce any surface tis plunged into willingly. Twas stolen from one of mine kin's horde a fortnight ago by frost giants and now lies within their possession but a few peaks over. Perhaps thy weak bodied ilk can help themselves for once?"   It seemed the conversation had reached its end. Downtrodden, yet hopeful, they had little more questions to offer and it seemed their benefactor had even less answers to give, and so a passage had been revealed that was far less treacherous than the one they entered from, but no less winding...giving them time to lament how little they have achieved. The morale was not entirely crushed, however, as the promise of a weapon to smite the vile creatures that plagued the land at least afforded them some direction, and so they set out, clutching their cloaks close and braving the blizzard that frequented the mountain range. 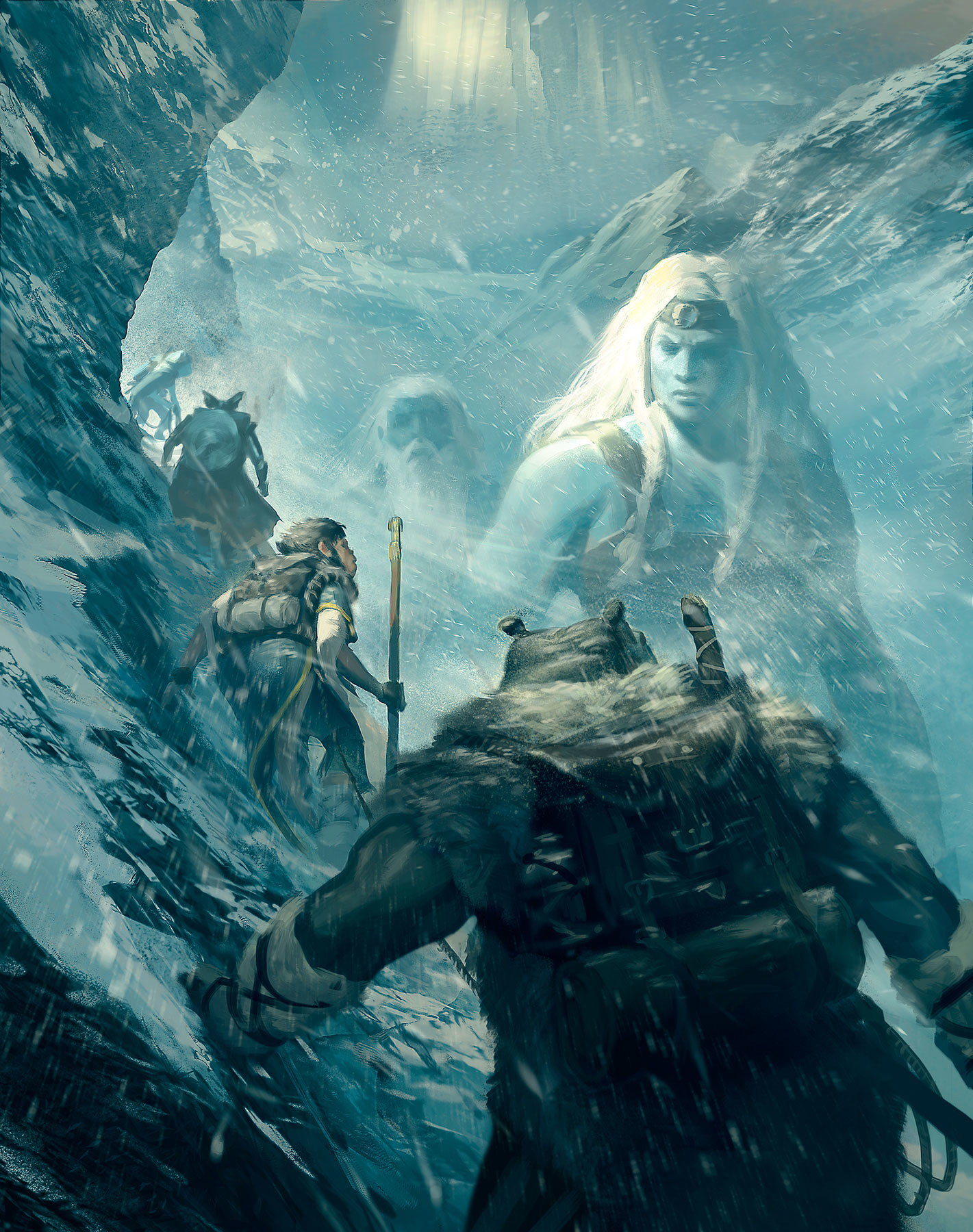 by Javier Charro
Crossing the peaks, it was there they spotted the towering patrons of the valley and it seemed that they certainly lived up to their namesake. The behemoths stood a whole Human taller than hill giants, and with their frigid blue skin, their 'Frost' moniker rang with true clarity. The group pressed themselves against the mountain for fear of getting caught, and for a brief moment, Toren'Domir froze, and not because of the inhospitable temperature. Flashbacks of his encounter with Hoarmin chilled his blood in line with the frozen tundra. His knees grew weak, yet as he went to collapse, Relomas, his brother, slid an arm under him to support, "Are you ok?"   "Yes...We...Need to move quickly."   "Well...We could use my experimental person-to-matter travel confibulator device!" Gillibee spoke, undoing her backpack to set it atop the snowy bank, much to the confusion of the group, and the delight of her husband, Knalalumper.   "Why, that's brilliant! And for the layman, that means a teleportation device!" Ever supportive, Knalalumper wrapped his arms around the neck of his partner as she began to set up.   "What?! Why didn't we use that before?!" Senera, rightfully barked, her short temper getting the best of her.   "It takes a while to set up and it's just a prototype, you know! And...Well...I kind of forgot. We've been through a lot!"   "And besides, we remembered it now, so we should just be thankful of my sweetheart's great work!"   The couple's puppy love antics may have fetched favor in some social circles, but the worn expression of the group showed this was neither time nor place. Regardless, after several minutes past, it seemed preparations were complete.   Still, despite the pride that wore on her face, the aesthetics were surely underwhelming. It may as well have been an oil barrel cut into a quarter, with wires clipped around it and a small, blue glowing basin in the middle. It was truly beyond their comprehension.   "Everything is calibrated! It should get us right into their home. Just step right in!" Gillibee spoke, giving a showman's sweep of her hand towards the setup.   "After you..." Senera spoke with due skepticism. Gnomish inventions were rarely seen outside of their home and those that did survey were met with little clarity. With a confident nod, the small figure stepped into the contraption, aided by her husband who, holding a small device like some sort of arsonist eager to press the detonator, pressed the button. After a bit of floating and machine whirring, she was sucked into the ether, the party's eyes wide and lips agape in bewilderment.   "I have to be the last one in so I can operate this from this side. So who's next?"   The group looked to one another until one by one they shuffled in, receiving the same treatment until finally they were all on the other side, yet they were stricken with pitch black.   "Is everyone here?" Knalalumper asked, met with a dull sound off from each member.   The blaze from a torch freshly lit flickered like the comforting light from a heart, Relomas slowly guiding it left and right.   "Just where are we?"   As he turned to the rest of the group, he was petrified after following Gillibee's trembling, pointing finger, her shaken words rattling in his racing mind,